Home Real Housewives of Dallas News RHOD Newbies Confirm They Were Test Filming Before Series’ Cancellation, Hint at Which Cast Members Were Asked Back

RHOD Newbies Confirm They Were Test Filming Before Series’ Cancellation, Hint at Which Cast Members Were Asked Back 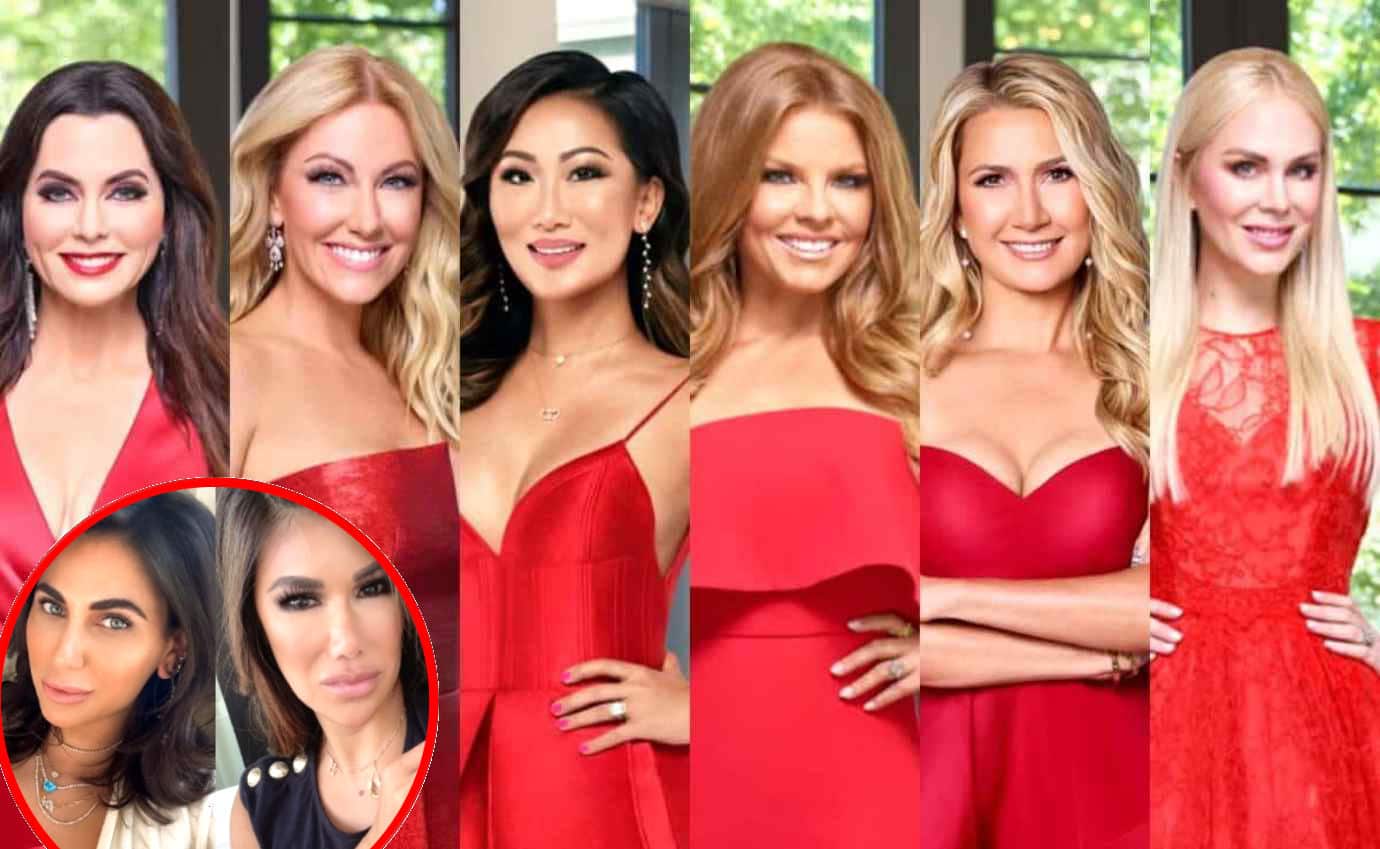 Lizzy Savetsky and Madelaine Lam are speaking out about going through the casting process of The Real Housewives of Dallas before the series was suddenly canceled by Bravo earlier this week.

In a series of posts shared to the two women’s Instagram Stories, Lizzy and Madelaine looked back on the time they spent test filming for the show’s potential sixth season while also hinting at which season five cast members had been asked to return for the would-be new episodes.

“What can you say re RHOD? Were you filming??!!” a fan asked Lizzy on her Instagram Story on August 18.

“We filmed test scenes with cast and family scenes for the executives to review only. We did not film anything for upcoming season,” she replied. “It was pretty surreal and I never thought we would make it as far as we did. I was just going through the process and waiting to be cut. I was very anxious about the prospect of it all actually happening.”

“I believe with my whole heart that G-d did not [want] this for us,” she added.

Although Lizzy believes the cancellation of RHOD was in her best interest, she also said she was looking forward to spending time with the returning women, who she mentioned by name.

“I adore my sweet friends [Kameron Westcott], [D’Andra Simmons], [and Dr. Tiffany Moon] and was grateful for the opportunity to grow real life relationships with these women,” she wrote, seemingly confirming an earlier report that said only three women from season five would be back. 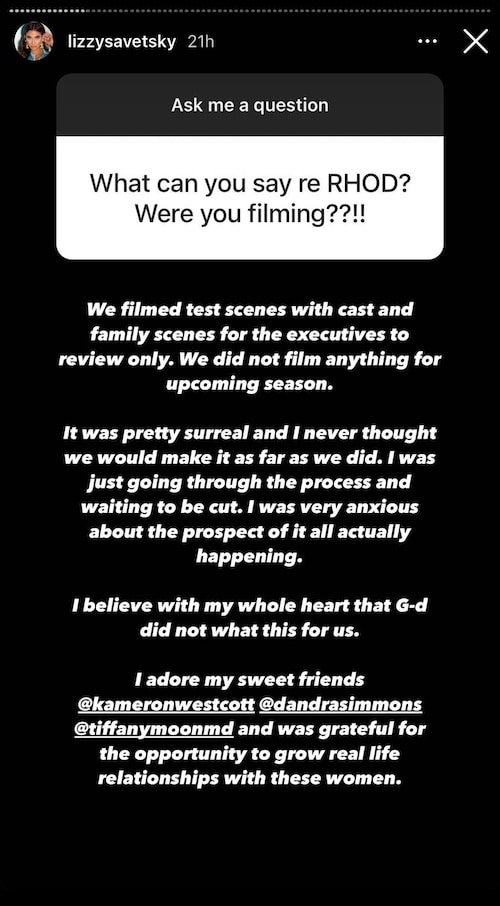 “What made you decide to try to be on RHOD?” another person wondered.

“They approached us and I was resistant for a very long time. Ultimately we decided to go through the process and see what happened,” Lizzy explained. 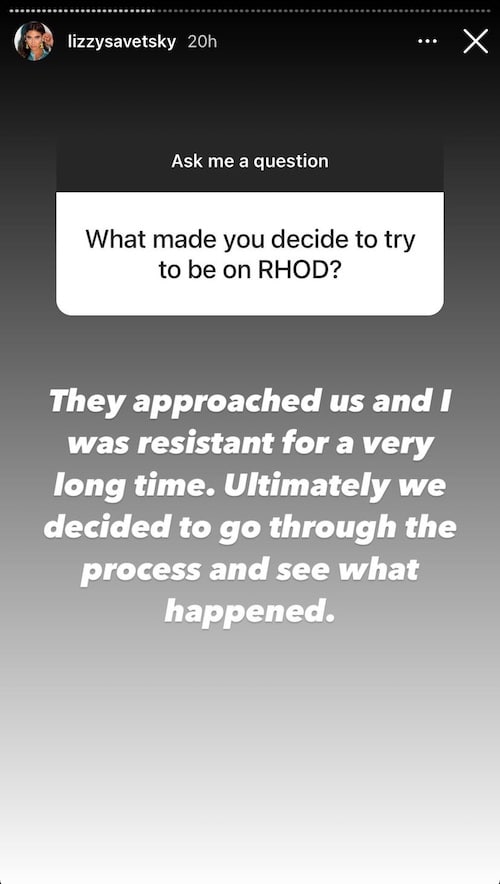 Meanwhile, on Madelaine’s page, she was asked if she was going to be on RHOD season six.

“[Throwback] to my very first casting interview. Did I answer the question?” she responded, along with a photo of herself wearing a pink top. 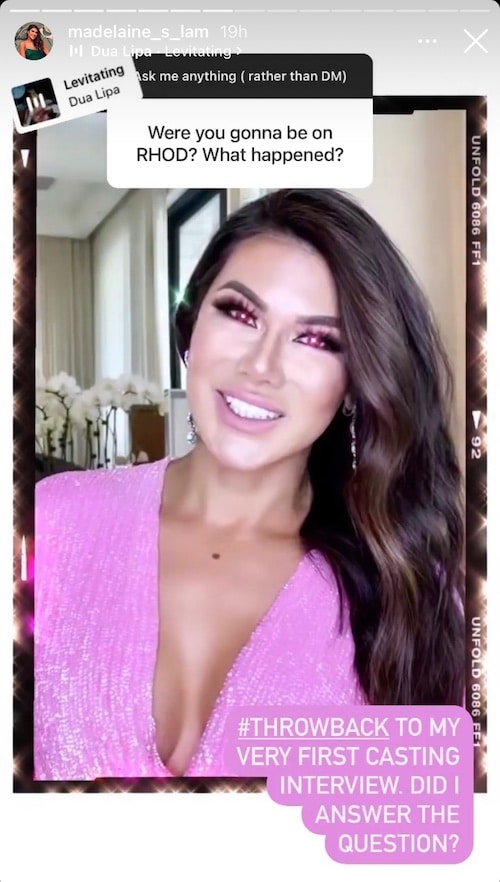 Madelaine also shared a second photo from production after being asked if she was test filming.

“Here’s a [behind-the-scenes photo]. Filming at the house with the fam! Looked like so much [makeup] and when I looked at myself on the camera I looked like I didn’t have any on [because] there’s so much lighting! I had to tell my [makeup artist] to add more!” she recalled. 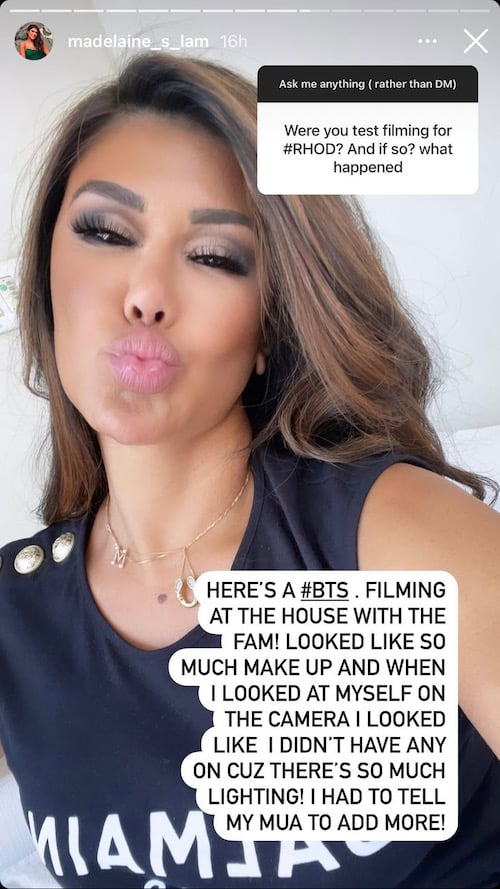 In a third post shared to her Instagram Story, Madelaine detailed the process of being cast on the show.

“To summarize, initial interview, if you pass that, it’s followed by more (I lost count). Interviews recorded on camera. That gets sent to Bravo. If the exec approved of you. Whole crew flies to you from LA and films you. Cast members and Family. Then you send a ton of photos of your life,” she revealed. 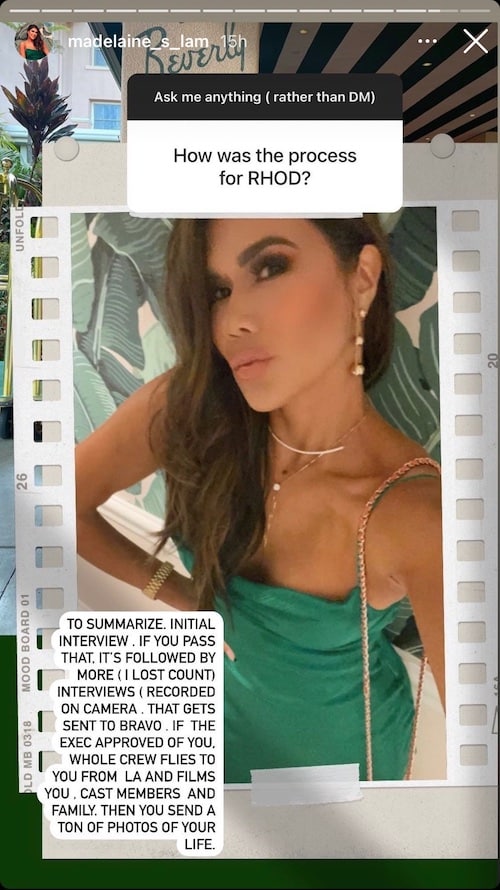 Just days before the cancellation of RHOD was confirmed, Lizzy and Madelaine were spotted with D’Andra and Dr. Tiffany at the Monarch restaurant in Dallas.

“We laughed, danced, and ate in style celebrating [Dr. Tiffany Moon] last night at [Monarch restaurant] in Dallas!” D’Andra wrote in the caption of a group photo. “A special thank you to my friends at [Bellissimi Fiori] for making two custom arrangements for the table! And to [Posh Cakes by Shane Morgan] for the beautiful and delicious Birthday Cake! The night was filled with such sweet friends and fun!”

D’Andra even included the RHOD hashtag.