REPORT: RHONY Episodes Are Cut Amid Backlash and Low Ratings, Plus Is Cast Preparing For Virtual Reunion Taping For Season 13?

The Real Housewives of New York City season 13 is allegedly headed for an early end.

According to a new report, the currently airing season, which was supposed to include 20 episodes, will have just 17 episodes. And, when it comes to the upcoming reunion, Andy Cohen reportedly confirmed it will be taped on Wednesday, August 25, as sources revealed the filming would be virtual.

“I have it on good authority that RHONY this season got cut down with episodes midway through. [Ramona Singer] confirmed in May that the season was going to be 20 episodes, but it got cut down to 17,” an insider shared with the Real Housewives Franchise on Instagram on August 24, noting that the finale episode will air next week, despite the midseason trailer being released just weeks ago.

As for the remaining footage of the series, including an ice skating event and a group scene with Leah McSweeney‘s boxing coach, Martin Snow, that will “be shoved to a lost footage episode.”

“Apparently Bravo decided midway through RHONY season 13 to cut down the number of episodes, possibly due to the decline in ratings and negative feedback of the season by fans,” the fan page explained, noting their source as “quite reliable.”

In another report posted and later deleted by the Real Housewives Franchise on Instagram and shared by I’m Watching Bravo on Twitter, it was noted that Andy had shared details of the upcoming taping of the RHONY reunion on his radio show.

The page went on to reveal that because a number of cast members are not in New York City at the moment, an in-person reunion seemed unlikely.

“As Luann de Lesseps is currently in Europe, and Ramona is still in Aspen, Colorado, it seems like the RHONY reunion will be filmed virtually this season,” they explained. “Seems odd as Andy hasn’t asked for viewer questions as he normally does on Twitter, and filming an in-person reunion would seem easy for RHONY, as production and Andy are all based in New York.”

As for when fans will be seeing the reunion’s premiere, the Real Housewives Franchise said that because the special will likely take weeks to edit, the show will likely go on a brief hiatus before it airs, rather than airing directly after the finale. 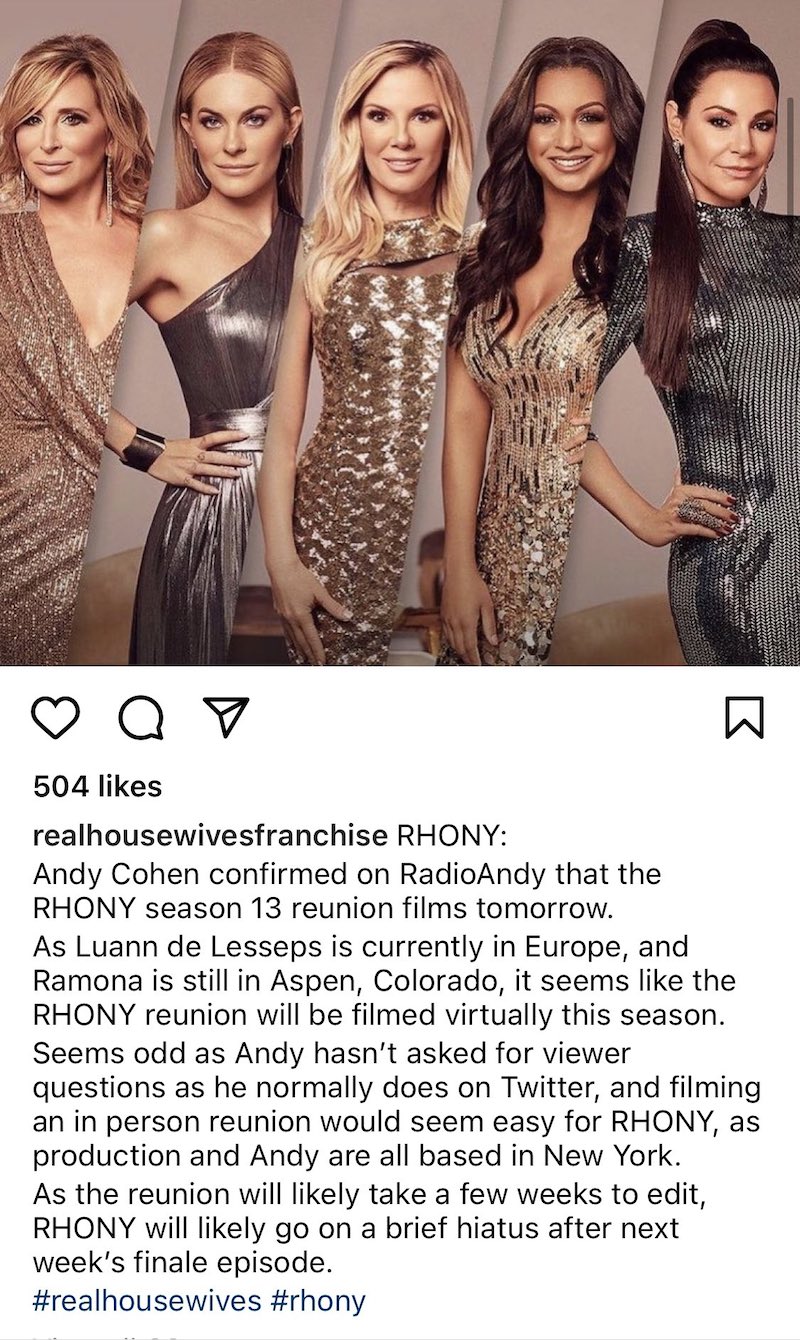