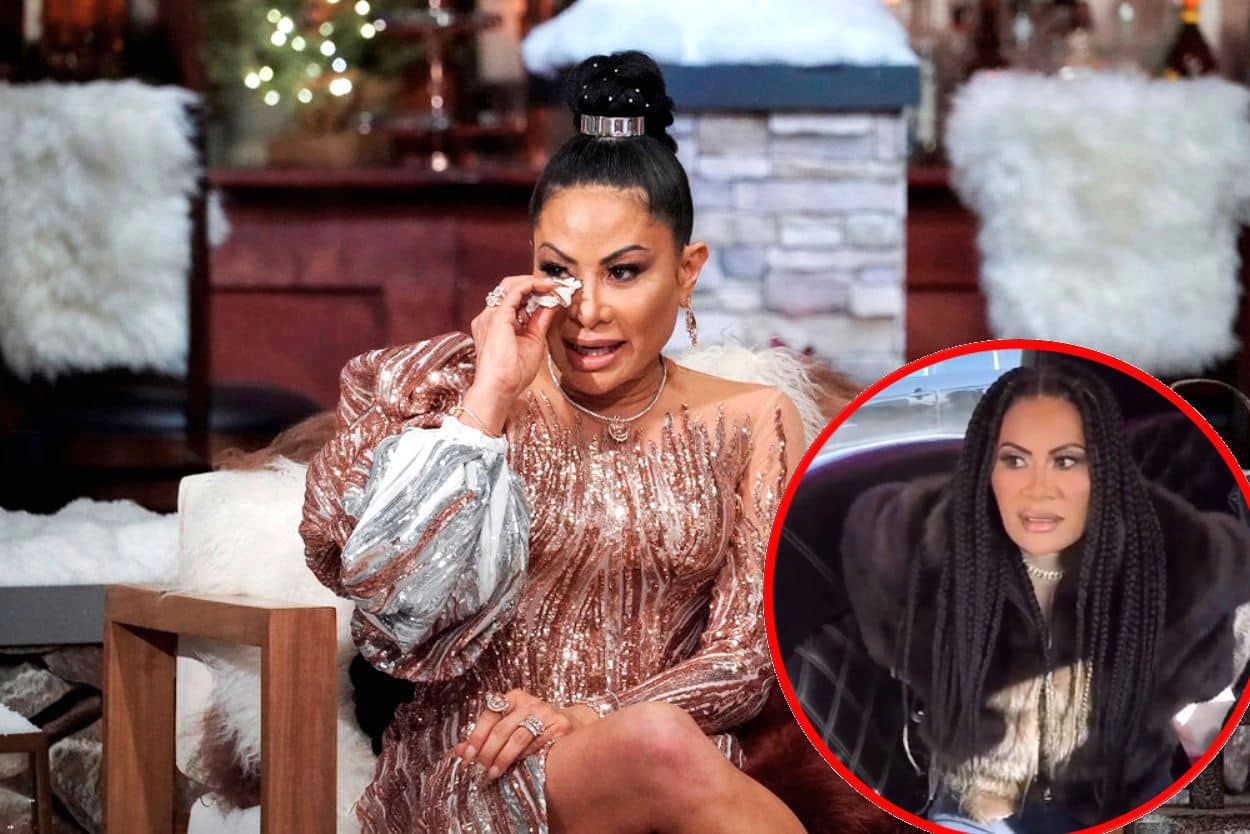 In a just-released sneak peek at the upcoming second season of the Bravo reality show, Jen is seen getting a phone call that prompts her to make an early exit from a girls’ trip and ultimately leads her castmates to discover that she is wanted by the feds for a massive money-laundering scheme.

“Hi!” Jen says as she gets onto a bus with her co-stars, including Heather Gay, Whitney Rose, Jennie Nguyen, and Lisa Barlow.

But, before they can head off to their destination, Jen gets a call.

“Hi, baby. No, not yet, we’re still… We’re at Beauty Lab and Laser, in the parking lot,” she informs the mystery caller.

Then, as the conversation continues, it is clear that something is very wrong.

“Okay… Okay…. Okay, wait,” Jen continues as she looks into an approaching camera.

“Can you turn this… off? Can we turn it off?” Jen asks Whitney as she signals to her mic pack.

Once off the bus, Jen tells Heather, “I have some bad news.”

“What’s going on? Yeah, I can feel your energy, completely,” Heather replies.

“I just got a phone call and I need to go,” Jen explains.

As police begin to arrive to the scene, Heather fears Jen is “on the run” as Lisa suspects someone tipped the feds off in regard to her location.

“How do they know she was here? Somebody had to have told them she was here,” Lisa notes.

With police rushing around, one of whom declares he has a “search warrant,” Whitney pulls up a shocking article about Jen.

“Oh my gosh! ‘Real Housewives Star Charged in Massive Money Laundering Scheme,'” she reads. “I have the f-cking chills. Her and Stu were charged for stealing people’s money, fraud.”

Later on in the sneak peek, the RHOSLC cast is seen reacting to the many accusations made against Jen.

“I just don’t think she’s who we think she is,” Lisa worries.

“Do you have business with Jen?” Jennie replies as Heather admits she doesn’t “want to be indicted” or “involved.”

“If we do not share what we know, we’re in danger,” Whitney declares.

In a couple of confessional scenes, Mary Cosby and Meredith Marks, who were not present when the arrest drama went down, answered a question about who may have tipped off the feds.

In response to a producer wanting to know more information about a potential leak, Mary smiles as Meredith says, “Um…”

In addition to revealing the dramatic moment in which Jen’s fraud scandal erupted, the sneak peek also gave RHOSLC fans their first look at the series’ season two taglines.

Jen Shah: “The only thing I’m guilty of is being shahmazing.”

Whitney Rose: “In a town of beauties and beasts, there’s only one Wildrose.”

Lisa Barlow: “You don’t have to like me, I love myself enough for the both of us.”

Jennie Nguyen: “I have plenty of everything, including opinions.”

Mary Cosby: “If you come for me, I will send Jesus after you.”

Meredith Marks: “I may be known for my ice but I always bring the heat.”

Heather Gay: “I was raised a Mormon but now I’m raising a glass of champagne.”

The Real Housewives of Salt Lake City season two premieres on September 12 at 9/8c on Bravo.