Home Real Housewives Of Salt Lake City News Was the ‘RHOSLC’ Cast Involved in a Physical Altercation Amid Filming on Season 2? Lisa Barlow Speaks Out About Alleged Fight With Jen Shah

Was the ‘RHOSLC’ Cast Involved in a Physical Altercation Amid Filming on Season 2? Lisa Barlow Speaks Out About Alleged Fight With Jen Shah

Lisa Barlow is speaking out amid allegations of a physical altercation between her and Jen Shah.

Amid filming on the upcoming second season of The Real Housewives of Salt Lake City, Lisa took to her Instagram page, where she responded to a fanpage that suggested she and Jen had gotten physical with one another during production.

“Yes you heard that right! An [alleged] physical altercation [between] Lisa Barlow and Jen Shah occurs in season [two],” the fanpage alleged, according to a screenshot shared by The Real Housewives of SLC on Twitter.

“Not true,” Lisa replied, along with a red heart emoji. 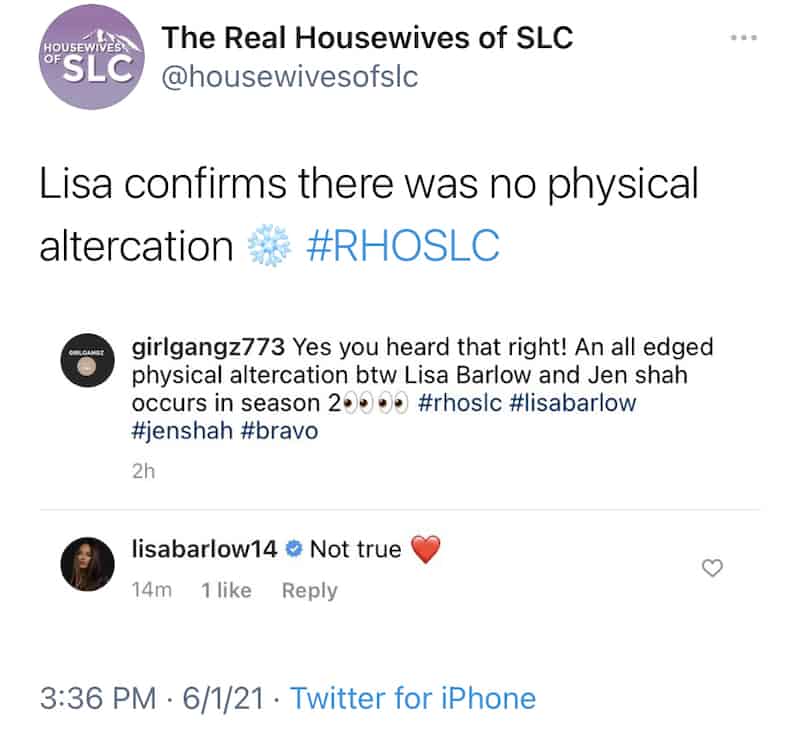 When fans last saw Lisa and Jen at the RHOSLC reunion for season one, Lisa was defensive of Jen, choosing to take a stand against the other women and insist she is loyal.

Then, months later, Jen was seen going on a rant against her co-stars, including Heather Gay, Whitney Rose, and Meredith Marks, when she noted that Lisa was the only non “fake a– white girl” on the show.

“Hey white girls….stop doing white girl sh*t and STFU and take a seat next to your best friends Karen and Becky in the back row, “Jen began in a social media exchange leaked on Instagram. “They’re fake a– white girls. Lisa [Barlow] is the only other person I can f*ck with.”

Also this year, Lisa spoke highly of Jen, who has since been accused of money laundering and fraud against elderly victims, during an appearance on the Behind the Velvet Rope podcast, saying her co-star is “100 percent authentic.”

“Jen Shah is exactly how she is in person as she is on camera. When I talk to Jen on the phone and when I see Jen in person, it’s the same person. I forget cameras are around. Jen is like a very extreme version of me; she’s 100 percent authentic. I mean, I love her,” she gushed.