Erika Jayne was slammed by former Girardi Keese employee Kimberly Archie on Twitter after accusing her fans and followers of making her a “villain.”

While admitting she “finally” agrees with attorney Ronald Richards on Instagram and stepping out looking “downcast” in Los Angeles, the Real Housewives of Beverly Hills star complained that nothing she says is “good enough” and was promptly called out for failing to care about the victims of estranged husband Thomas Girardi‘s crimes against his former clients.

“You only have yourself to blame for being a villain,” Kimberly wrote in response to Erika’s complaint. “You have a huge platform [and] opportunity to care about the victims. You choose to ignore us. Just like you won’t have the balls to reply to me. Keep trolling the trolls, [and] I’ll keep helping the other victims you benefited from.” 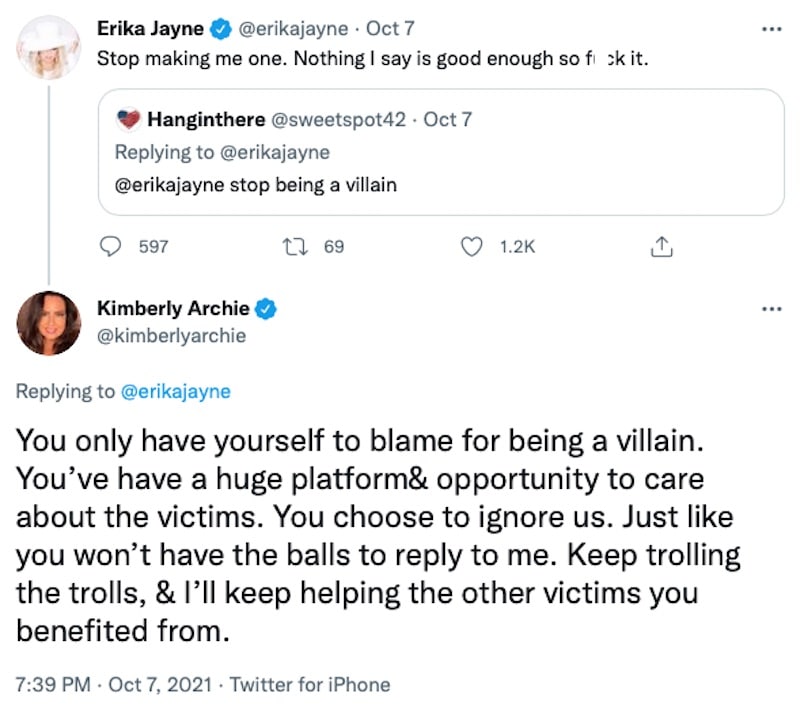 While Erika didn’t respond to Kimberly, as Kimberly anticipated, the RHOBH cast member did offer a reply to Ronald after he posted a message on Instagram that accused Girardi Keese employees of failing to take responsibility and protect the clients Thomas was representing.

“What does everyone attorney who worked at Girardi Keese as either an Associate, quasi Partner, or Manager have in common? Answer: Not one of them has taken responsibility for the clients they were obligated to protect and serve or gifted back any of their bonuses or salaries,” he wrote on Instagram.

“Finally a post I agree with. Only took you a year of looking in the wrong direction … you really are slow,” Erika replied, along with a shady diss at Ronald’s job as the attorney of the trustee presiding over Thomas’ bankruptcy. 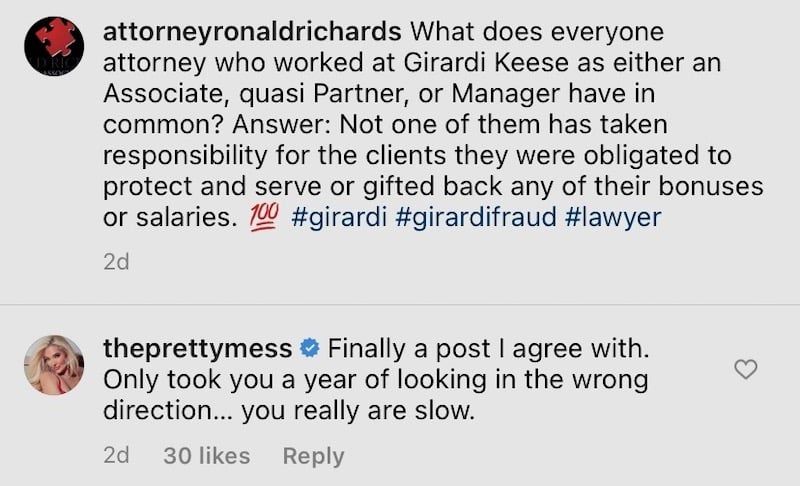 After coming across Erika’s response to his claim about the Girardi Keese employees, Ronald shared a second message on Twitter.

“Taking aside the not nice dig from [Erika Jayne] on the [Instagram page], we are looking at all directions but the big [money] went to one person. We have only been retained since June of 2021 so it hasn’t been a year. We have asked for any 411 to aid in the below review,” he tweeted, along with a screenshot of the post he shared on Instagram.

Meanwhile, in photos shared by the Daily Mail, Erika was seen appearing to be quite downcast as she ran errands in her dust-covered Range Rover in L.A. on Tuesday.

No makeup, sloppy hair/clothes, dirty car, so frickin fake. She's full of chit. No sympathy forthcoming while she's living in a $7K/mo house in BHills.