As she faces a $25 million lawsuit as well as claims of helping estranged husband Thomas Girardi embezzle money from former clients, the Real Housewives of Beverly Hills cast member is under fire for a post that many believed was comparing her to Christ.

In her reshared post, a man named Matt Murray took aim at attorney Ronald Richards, who was hired to investigate the RHOBH star amid Thomas’ bankruptcy earlier this year.

“[Ronald Richards] should be disbarred for ‘unethical practice’ by slandering [Erika Jayne] for misconduct the COURTS NEVER charged her for! Ronald (a lawyer) undermined the judicial system by making accusations [and] insinuations in hopes it will inspire public opinion to override the courts. (IF it ever went to court),” he wrote. “This behavior is dangerous [and] reckless for our society! Everyone should take note!”

The post also said, “This is exactly how CHRIST died.”

Understandably, the comment about Christ led to a social media firestorm, and ultimately, an additional message was shared.

“For the ignorant ones… This is not a post comparing [Erika Jayne] to christ. It’s comparing an unethical lawyer who is trying to undermine the judicial system by persuading the courts to ACT based on public opinion and NOT by the law. Just like the pharisees did to Christ,” Matt explained. 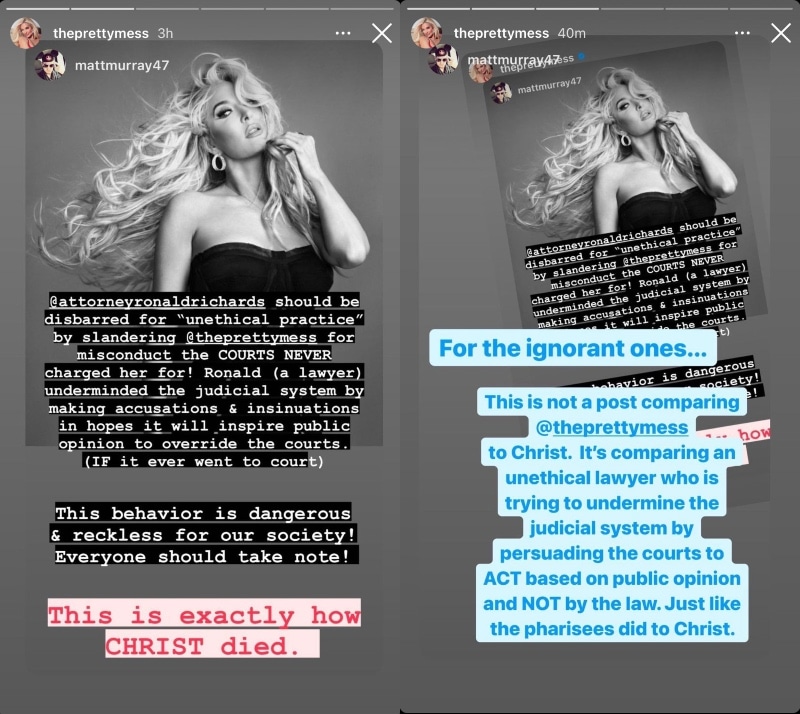 Although Matt attempted to make it clear that he was not comparing Erika to Christ, the story began making headlines. This led Matt to post a third message, which was also reshared by Erika.

“Let me get this straight, a ‘news publication’ [Page Six] took my post [and] instead of asking how our judicial system is being held accountable [and] what our government is doing to correct the problem, Page Six fabricated a narrative on how [Erika Jayne] is comparing herself to Christ for clickbait! Got it! Maybe if they asked the right questions it wouldn’t have taken [Britney Spears] 13 years to be freed… The Law SHOULD NOT be persuaded by public opinion because most opinions are formed from fabricated lies,” the message stated. 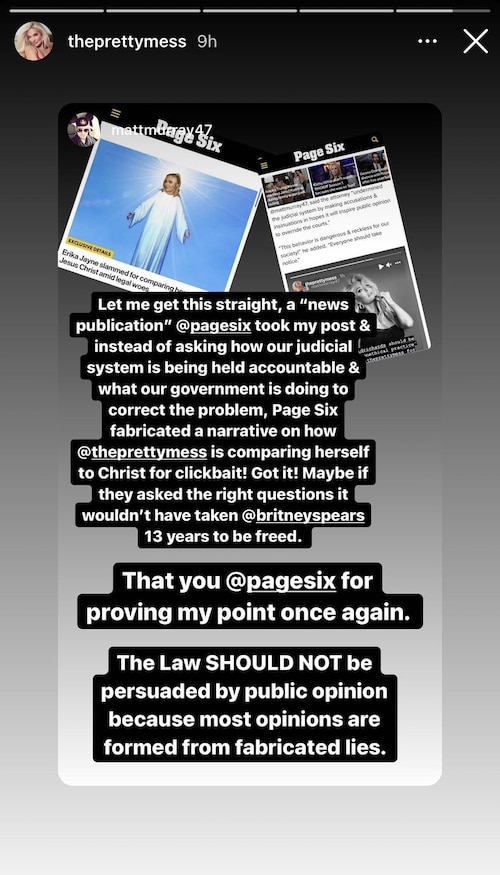 On Twitter, Erika also shot down the idea that she was comparing herself to Christ.

“No, I did not compare myself to Christ, someone else did and I reposted it. Now everyone can have a pretend meltdown about it,” she tweeted.

No, I did not compare myself to Christ, someone else did and I reposted it. ????????‍♀️ Now everyone can have a pretend meltdown about it. ???? https://t.co/uiRuSyeNA5

While Erika insisted that her reposts were not meant to be a comparison between her and Christ, her followers on Twitter were less than sold and flooded her with critical comments.

“Reposting is the same as posting yourself. It means you cosigned it. Seriously, what is wrong with you?” one woman wondered.

“Reposting it is agreeing to the comparison,” another said, along with a face-palm emoji.

“The fact that you reposted it makes it no better, it’s the reasoning behind it and then dumping it in our laps is classic narcissistic behavior,” noted a third.

Other followers of the RHOBH cast member said that her posts on Twitter made it difficult to sympathize with her and slammed her as hypocritical.

Another person pointed out that Erika previously shared a photo of herself nailed to a cross.