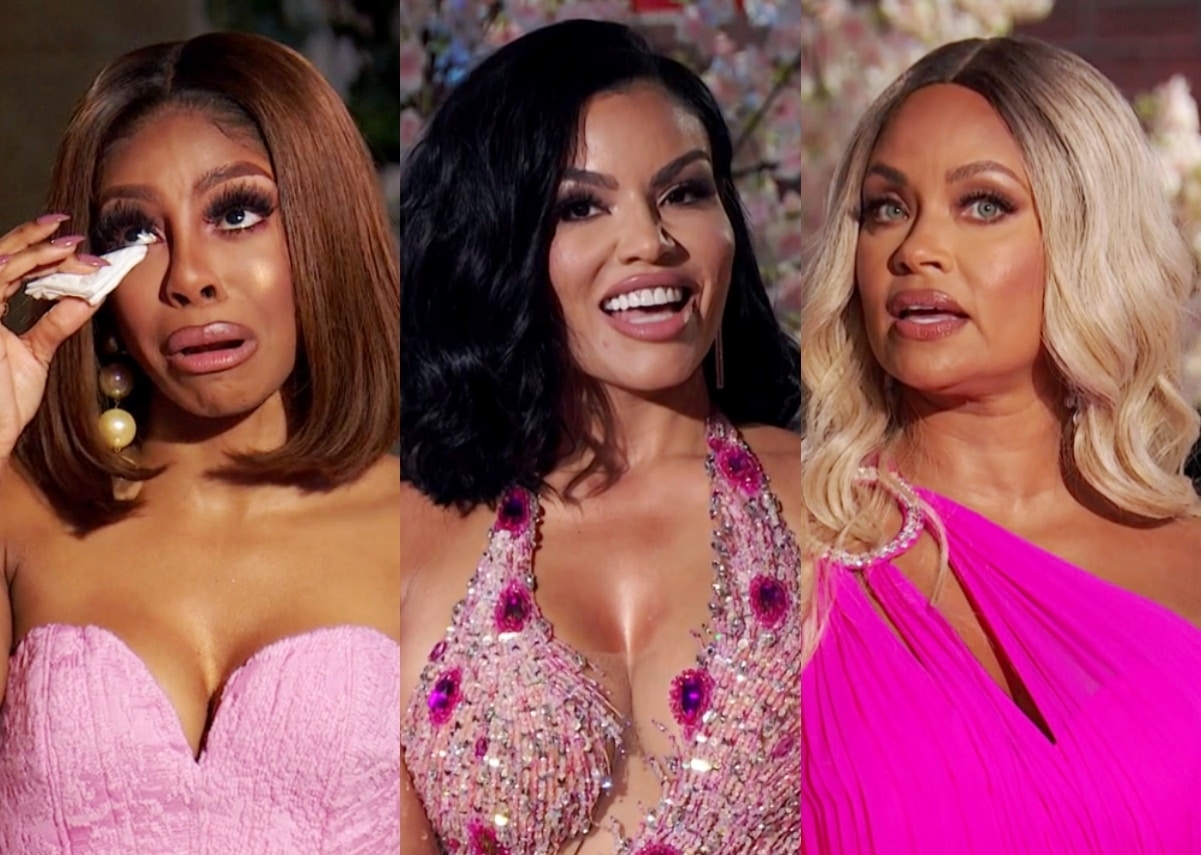 Our Real Housewives of Potomac are showing up in their pink confections to hash out this past season. Whose job is it to bring the burn book this year? Let’s catch up with our RHOP ladies post season, shall we?

It is eerie hearing Nicki Minaj spouting off questions that are designed to provoke and offend and ending with her signature trill. She will fit in perfectly with this group. Andy greets our Potomac ladies, who are all swathed in shades of pink. Pink signifies unconditional love and is the balance between the spiritual and the material. I am unsure if there is any conviviality in this room, but we can always hope for it, right?

This set is covered in Pepto-Bismol pink, and Andy says it is fit for our goddesses of Potomac. Let us talk about the fashion or lack thereof, shall we?

Candiace comes in peace sporting a cute little bob haircut, and she claims she is no longer a Twitter disaster. I am so glad she did not come in wearing a turban this time. Candiace has now dropped a full album titled “Deep Space,” and she got a shout-out from Anita Baker.

Robyn is wearing a dress that is a shade of pink but looks matronly. She should have done something with her hair, and her makeup is way too heavy. Ashley and Candiace look like the pageant queens from their past with globs of makeup and glitter. The winner of the RHOP pageant is Ashley since Candiace loses points with her bodysuit crotch panel hanging out. Mia looks pretty, but her dress is better suited for a Vegas showgirl. My queen Karen is dressed in a hot pink number that is frankly not age-appropriate for her. It is way too short and tight, and it doesn’t accentuate her figure in a flattering way.

Andy thinks that Ashley looks like a Barbie doll. Ashley says that Michael calls her a Darby Barbie. Hmm, I am repulsed that he views his wife as a child’s doll, and I find this comment coming from Michael to be so skeevy. Mia gets some compliments on her gown from the other ladies. Dr. Wendy is perched on her seat with her lips puckered set up to fight, and there is absolutely nothing Zen about her.

Gizelle is standing by her designer who must secretly hate her. She is dressed in a hot pink jumpsuit, which is more flattering than her past reunion looks. Candiace does not agree with a lot of Gizelle’s clothing choices. She really should not throw stones either after seeing some of her ITM looks throughout this season. Wendy grimaces when Gizelle defends her stylist, who has been dressing her all season. She is seething that no one is telling her how fabulous she looks.

Wendy wears a pink sparkly gown that highlights her bolted-on boobs, and she is armed with her folder. She also has some tacky taffeta sequined material tacked on to her shoulder. Wendy is disappointed that Nicki Minaj could not be there. She will regret feeling that way when Nicki tears her relationship into shreds. We all know now that she did show up and threw lots of shade at these ladies.

Mia’s story gets retold, including her total body revamp. I noticed when Mia was talking that Wendy would not even turn her head when she was speaking. Mia must defend her clit surgery when the others do not understand why she needed that when she had C-sections. She just wanted her nether parts to get a tune-up. Wendy cannot understand how your p*ssy gets beat up when all you have is missionary sex. Well, Gordon bragged about how well-hung he was…

Mia then describes how Gordon endeared himself to her. My translation of her story would be the following. Gordon was stumbling around the club and lost his shoes . He was a great target for the strippers to take advantage of him when he transforms into “G.” I cannot imagine being attracted to someone who does not wear his shoes in a strip club. Can you imagine the bodily fluids on those floors?

Mia then gets asked if she took her clothes off. She did, but she kept her little booty shorts on. Mia gets asked about Valerie’s reaction to Candiace calling her low budget. Valerie is going to pray for Candiace. Candiace does not want any prayers from “that.”

Andy asks Mia if she solely owns her business. She claims to, but she also shared that she owned Massage Envys previously, and Gordon used to own McDonald’s franchises. The viewers call her out on how wishy-washy she can be this season and what a pot-stirrer she was.

Andy questions Gizelle on the timeline when she and Jamal broke off for good. Gizelle claims they split in early 2021, and Wendy calls her out and cites Jamal’s comments about not being in a relationship in December 2020. In fact, Reality Blurb’s article covering Jamal’s comments during that period is featured on the show.

Karen calls her out for being the other woman if Jamal was actively dating someone else. Gizelle mentions she was casually dating a commentator. Wendy cannot believe that Van Jones would date Gizelle since she lacks integrity. She is gunning for Gizelle, and her contempt for the bandits is fully on display. Robyn tries to defend her buddy Gizelle, and Wendy very rudely shuts her down.

Gizelle acts like the contents of the binder were not a surprise and she was not blindsided by it. Andy tries to get her to answer if her relationship with Jamal was monogamous. She tiptoes around that question and gives a noncommittal answer.

UGH, Wendy is so self-righteous when Gizelle gets called out on being treated like a green-eyed doormat. Side note: Wendy should stop bringing attention to herself since that makeup that is spackled on is not covering up her blotchy skin.

Andy asks Gizelle if she cried when she found out that he was cheating on her again. He is really trying to pull some emotion out of the vampire robot. Gizelle admits to being all cried out, and each time it happens it hurts her less and less.

Karen gets called out by a viewer about not supporting Gizelle. She did not want Gizelle to reconcile with Jamal since their relationship was unhealthy. Andy shadily mentions that Jamal owes $800k in taxes. Well, we know from other shows (RHOBH) how the timing can be suspect when the sh*t is going to hit the fan. Karen thinks that Gizelle should lawyer up since she was connected to Jamal in 2008.

Askale joins the group in her pink puffy confection, which everyone raves about. She wants to bring Gizelle’s style current. Askale gets called out for saying Karen had a drinking problem. She is really trying to stay relevant, but this whole season she had the doors shut in her face on several occasions.

Candiace having Chris manage her becomes a topic for them to discuss. We then must watch the salad toss again. Andy inquires why Chris would be her first choice for a manager when his skill set is around the kitchen. He wants to know how Chris is paid, and Candiace says in love, but Mia jumps in calling it prostitution. Candiace is all it takes one to know one.

We then get into their homeownership. Candiace proclaims that Chris’s name is on the deed and Dorothy’s is not. If Candiace wanted to dispel that rumor she could have brought a poster-size image of the warranty deed –just saying.

Candiace had to chew her mom out on disparaging Chris. She needs her triangle of tissue to start blotting her tears. Candiace says her family will never be the same after what Dorothy said about Chris. She said her in-laws watch the show, and they were unhappy about Dorothy insulting Chris.

Candiace gets called out for what she said about Mia’s mom’s background. She thinks that she was going light on her, and Mia should be grateful for that. Andy wants to know if Candiace thinks her nasty talk is working for her. Candiace owns her shady talk and thinks she just does a better job of shading the other ladies.

Ashley and Candiace disagree over whose forehead is bigger. I do not think there is a difference between their foreheads — it is all about the wig placement IMO. Candiace also has some bizarre fixation on Mia’s big feet. She definitely likes to pick apart the other women’s looks.

Andy calls Candiace the common denominator in the fighting situation. Did he just tell her that she was the aggravator in both situations? Andy gets constant tweets to fire Candiace. Gizelle would not have faulted Mia if she clocked her over her actions. She wants her to learn to edit herself. Candiace goes all ra-ta-ta-ta on everyone and loses herself in her fury. She will not accept responsibility if Valerie relapses over Candiace’s mean comments. Candiace found Mia’s comments to be foul, suggesting that she would be the reason for Valerie falling off the wagon. We end with Mia and Candiace f- bombing each other.

Well now, how are they going to drag this out into four episodes? Next week, we have more shade grenades thrown, and Candiace is being called out. Have a fabulous week, everyone, and let me know in the comments what you thought about everyone’s fashion!