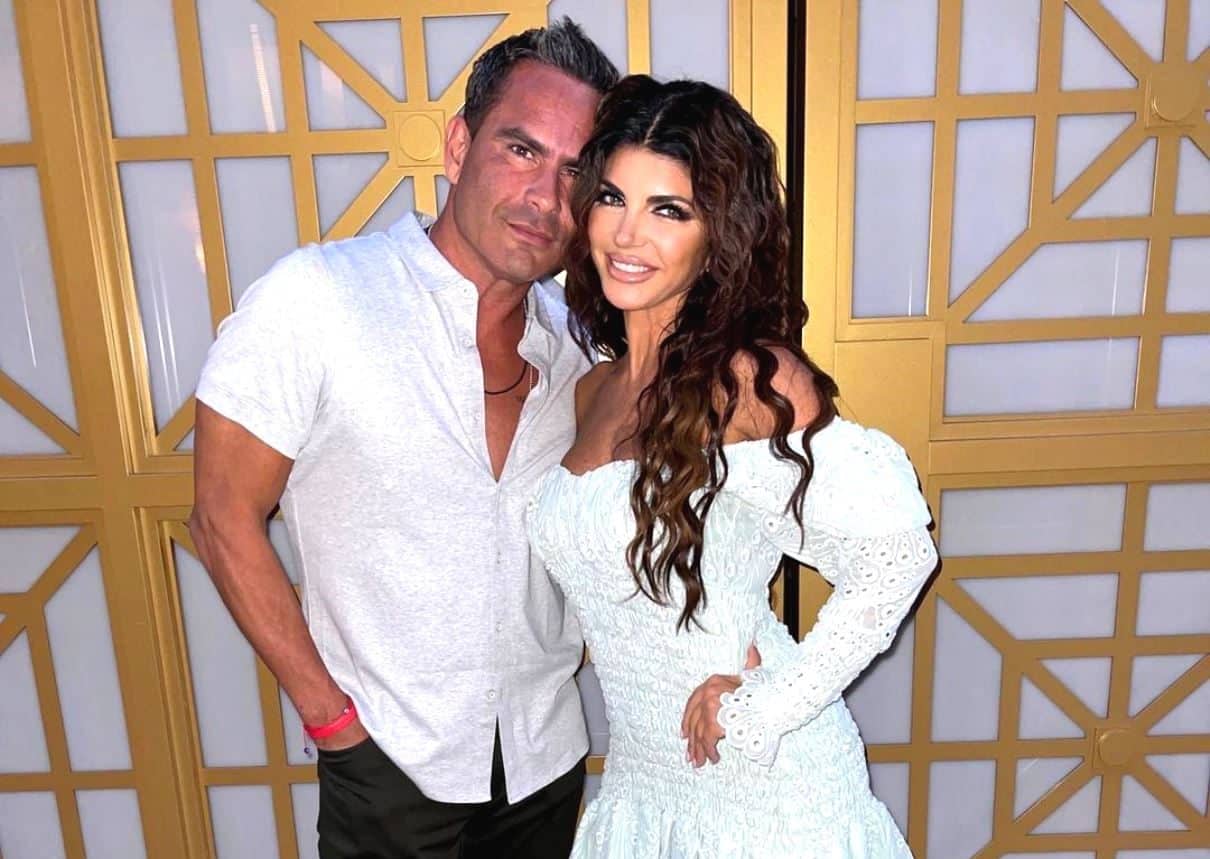 Luis Ruelas seemingly addressed the recent backlash he’s been receiving on The Real Housewives of New Jersey and on social media in a recently shared post on his Instagram Story.

After being slammed for the way he spoke to Margaret Josephs on the show and berated for his disparaging assessment of the looks of a female Instagram user, Teresa Giudice‘s fiancé posted a telling message with her fans and followers in which he suggested that he’s been portrayed incorrectly.

“You are not responsible for anyone’s distorted perception of you. Stand firm in your own light and truth,” his message read. 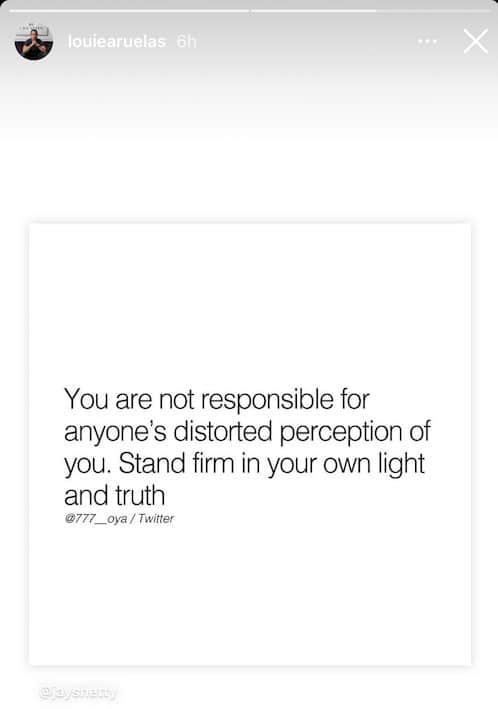 On the latest episode of the RHONJ, Margaret revealed she had received an anonymous letter that claimed Luis had allegedly hit an ex-girlfriend in front of her kids. Luis also faced a previous lawsuit in which an ex accused him of “controlling and abusive behavior.”

Earlier this week, after the female Instagrammer shared a negative message on his page, Luis clapped back by taking aim at her looks and slamming her as a “loser,” much to the disgust of many other social media users.

“No wonder why you hide your face behind dogs … I would too if I had a mug like that LOL,” Luis wrote with a crying-while-laughing emoji. “If you need to project your BS call your mom and ask her what happened to you growing up LOSER.”

In other RHONJ news, Luis’ ex, Vanessa, who was recently said to be in a relationship with Dolores Catania’s ex-boyfriend, Dr. David Principe, is actually the wrong woman.

Following weeks of swirling rumors regarding the alleged romance between the RHONJ exes, Bravo Breaking News has shared information from a source on Instagram.

“Just so you know this Vanessa never dated Luis! It was a mistake that everyone has ran with and it sucks so bad for them!!” a woman named Cassie wrote to the fan page. “Luis’ ex is a blonde Vanessa who did the run in a wedding dress. This Vanessa in the picture never ever dated him. She doesn’t even live in New Jersey!!! This story was just fabricated for drama and is just sad for them because it’s not true.” 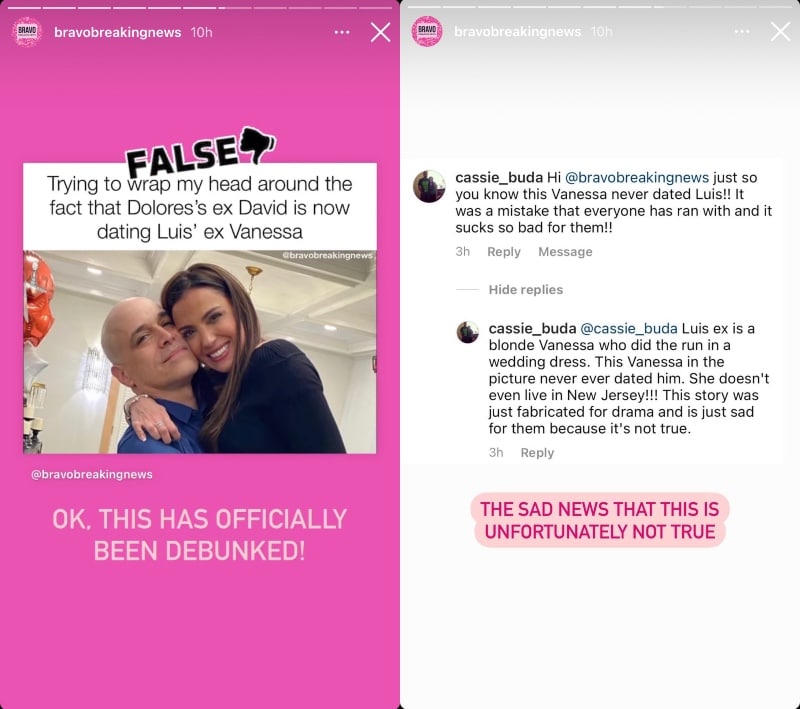 The fan page went on to share an additional post on their Instagram Story in which Luis’ actual ex, Vanessa Reiser, who was described as a “survivor of narcissistic domestic abuse,” ran 285 miles to raise awareness for the issue. 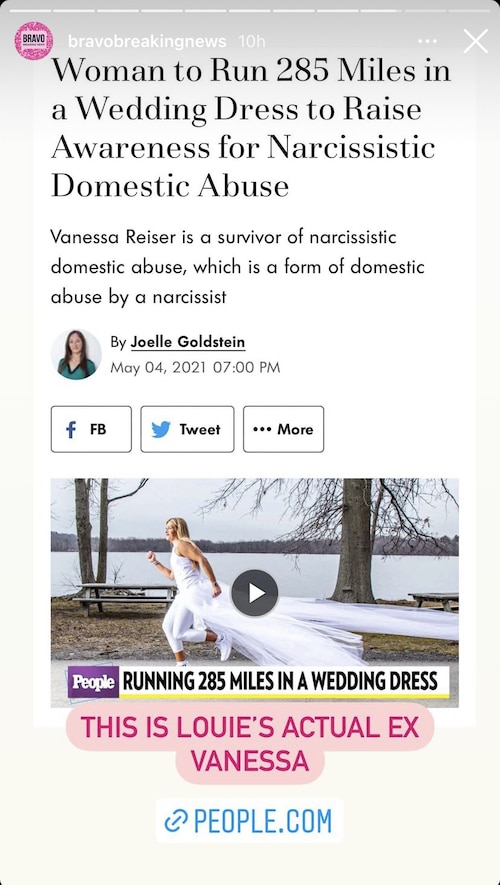 In April 2021, it was revealed by Page Six that Vanessa filed a lawsuit against Luis, accusing him of being sexually demanding, among other things, before settling out of court.

“He demanded that I be available for sex whenever he wanted,” Vanessa claimed in the court documents. “If I objected to his demands, Luis Ruelas would punish me. He would be nasty, withdraw from me, and blame me for what happened.”

The Real Housewives of New Jersey season 12 airs Tuesday at 8/7c on Bravo.