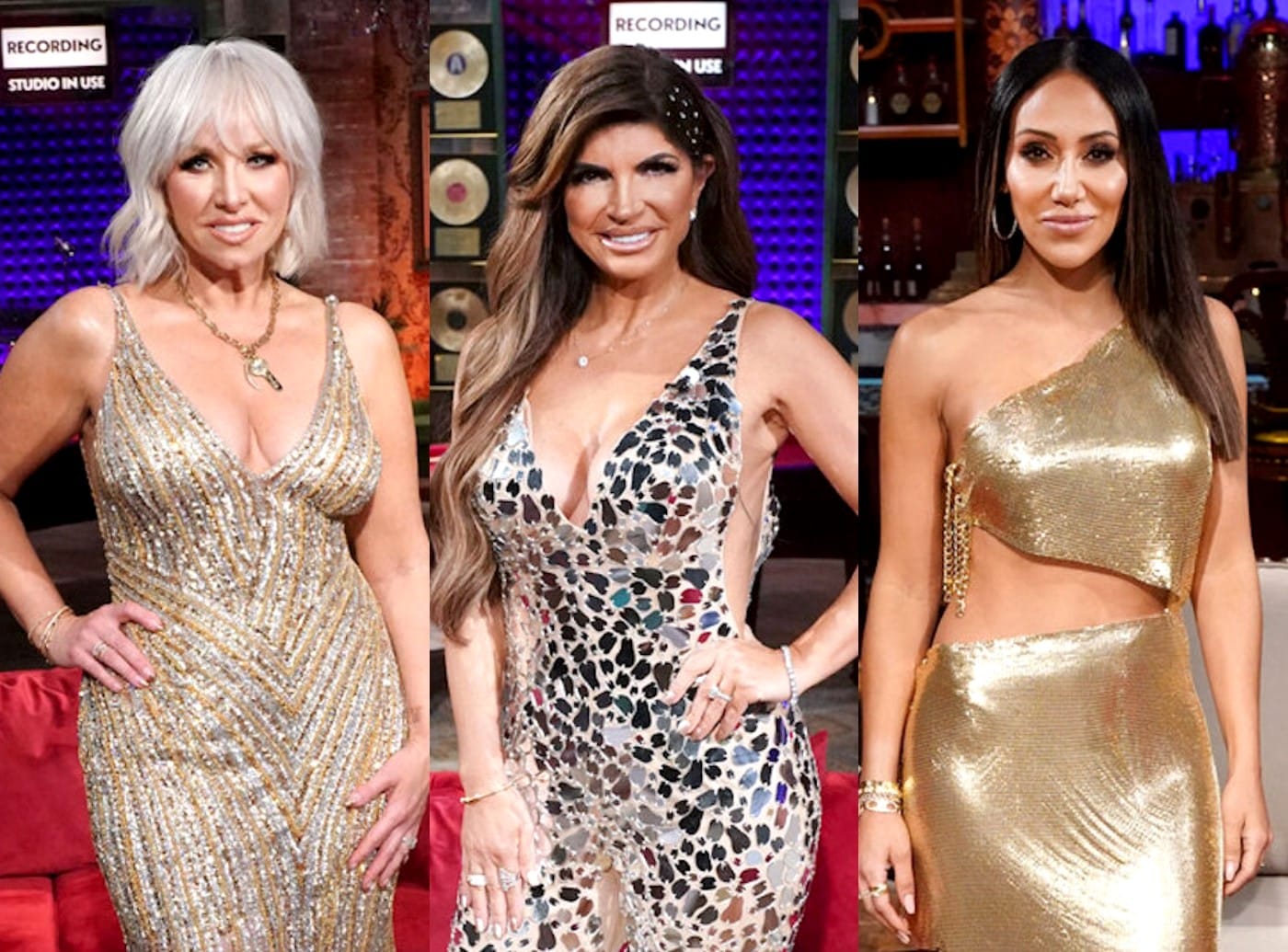 The ladies of The Real Housewives of New Jersey filmed their reunion special for season 12 last Thursday, and now, one week later, fans are finally getting their first glimpse at the ladies’ looks.

Below are photos courtesy of the Bravo Insider. 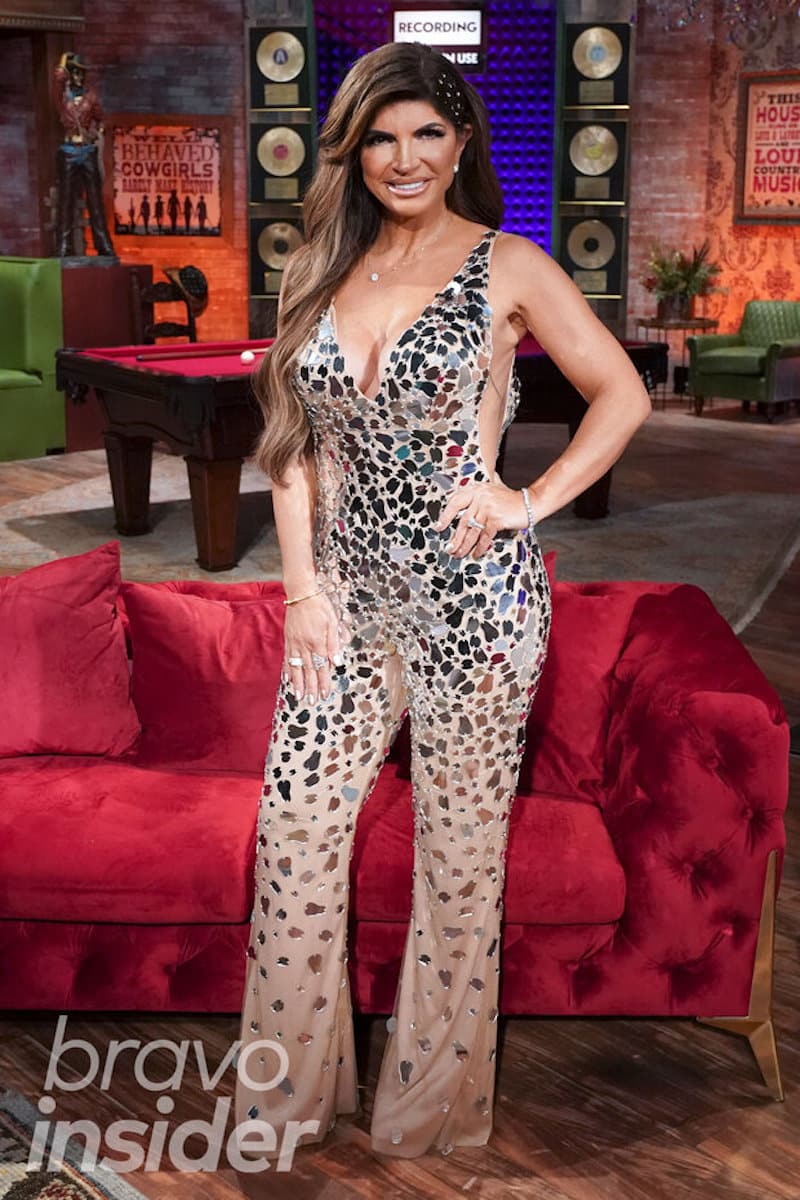 During the taping, Teresa wore a gold mirrored jumpsuit designed by Jovani, Aquazzura shoes, and jewelry from her own line, Jewels by Teresa. Meanwhile, her hair, which featured a side part and embellishment, was done by Lina Kidis and makeup by Priscilla DiStasio. 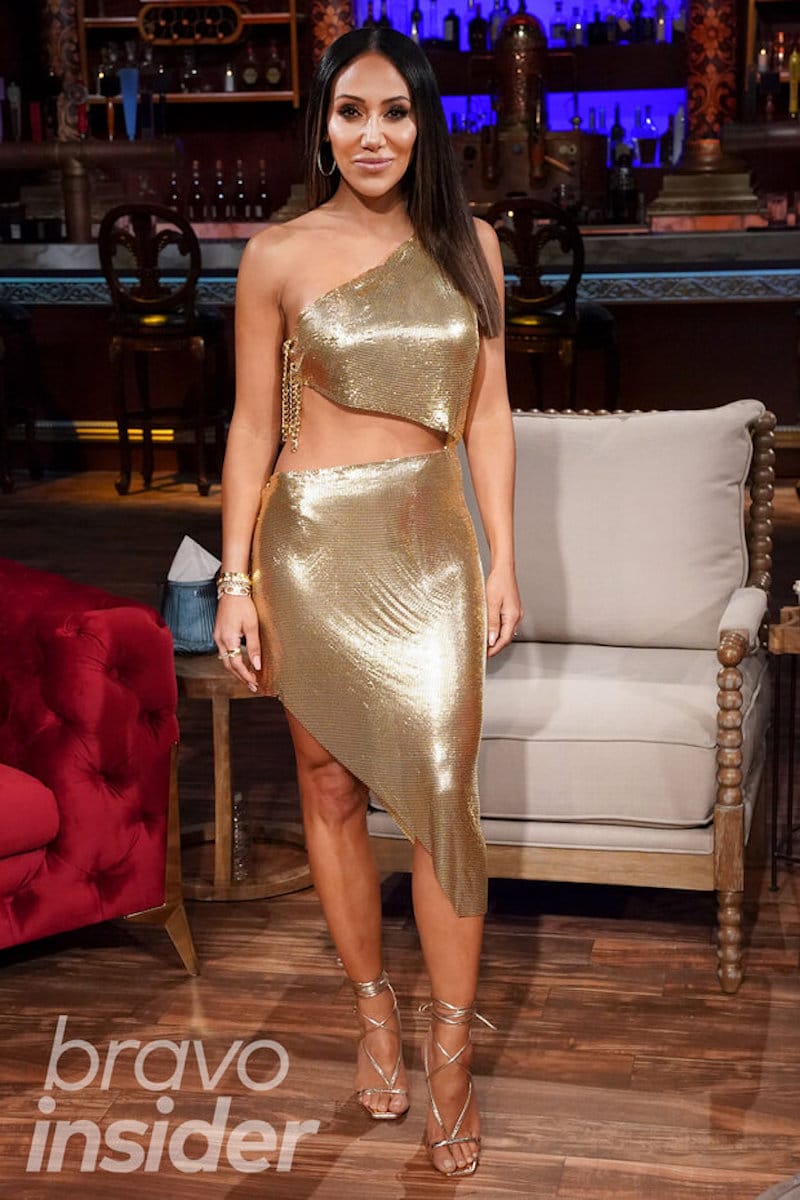 Melissa wore a metallic gold Bronx and Banco dress with a cutout feature and lace-up shoes by Schutz shoes. Her hair and makeup were done by Nathan Juergensen and Kasey Adam Spickard, respectively. 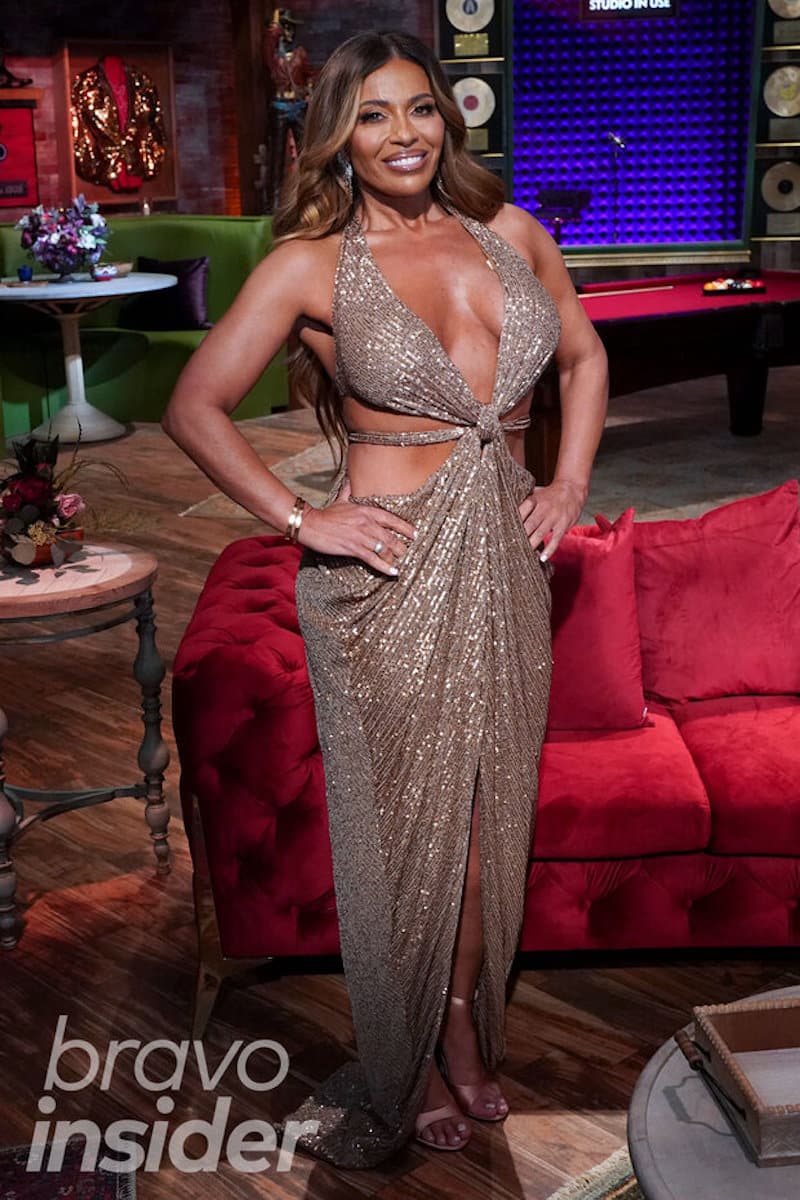 Dolores kept with the gold metallic theme as she sported a lighter color than Melissa’s bold gold and showed off her stunning curves in a dress by Donna Moda and shoes by Versace. Lewis DeCicco took care of Dolores’ hair, and her makeup was applied by Judi Gabbay Braha. 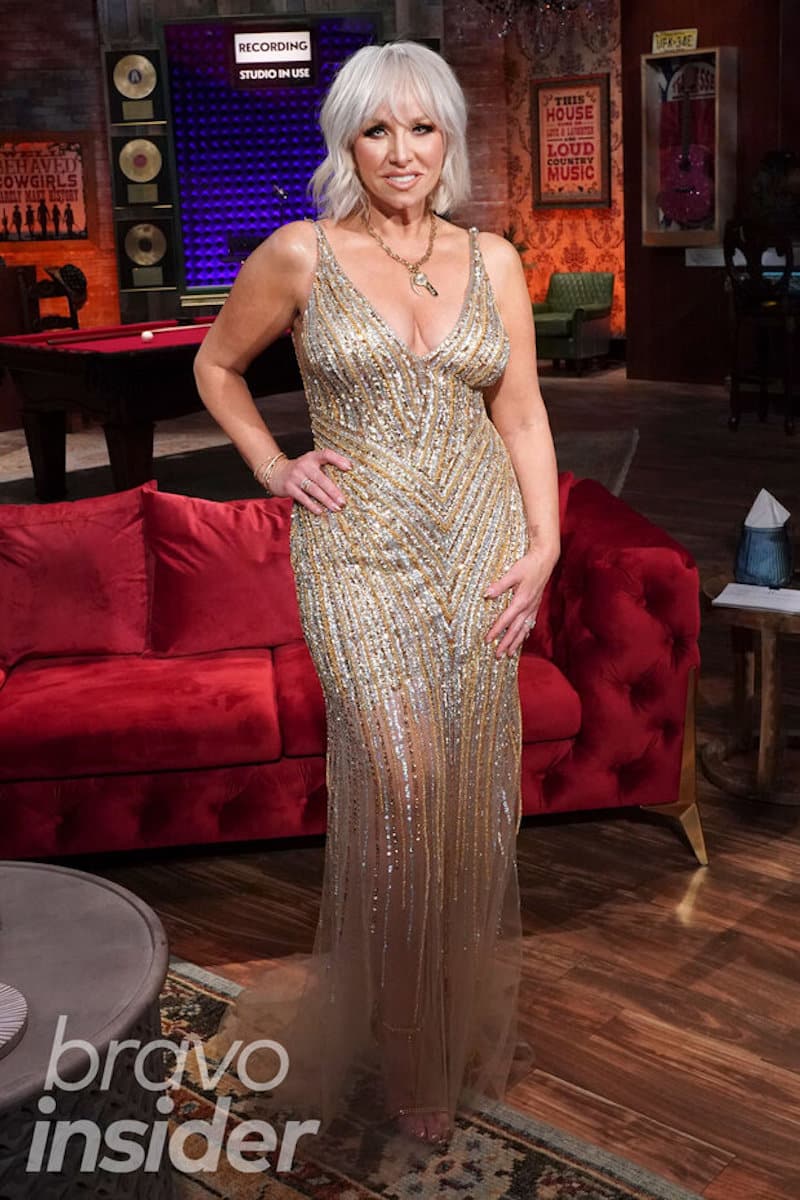 Margaret wore a silver and gold sequined Jovani dress with stripes, Tom Ford shoes, and jewelry from Nicole Rose and Jennifer Miller. Julius Michael did her hair, and her makeup was done by George Miguel. 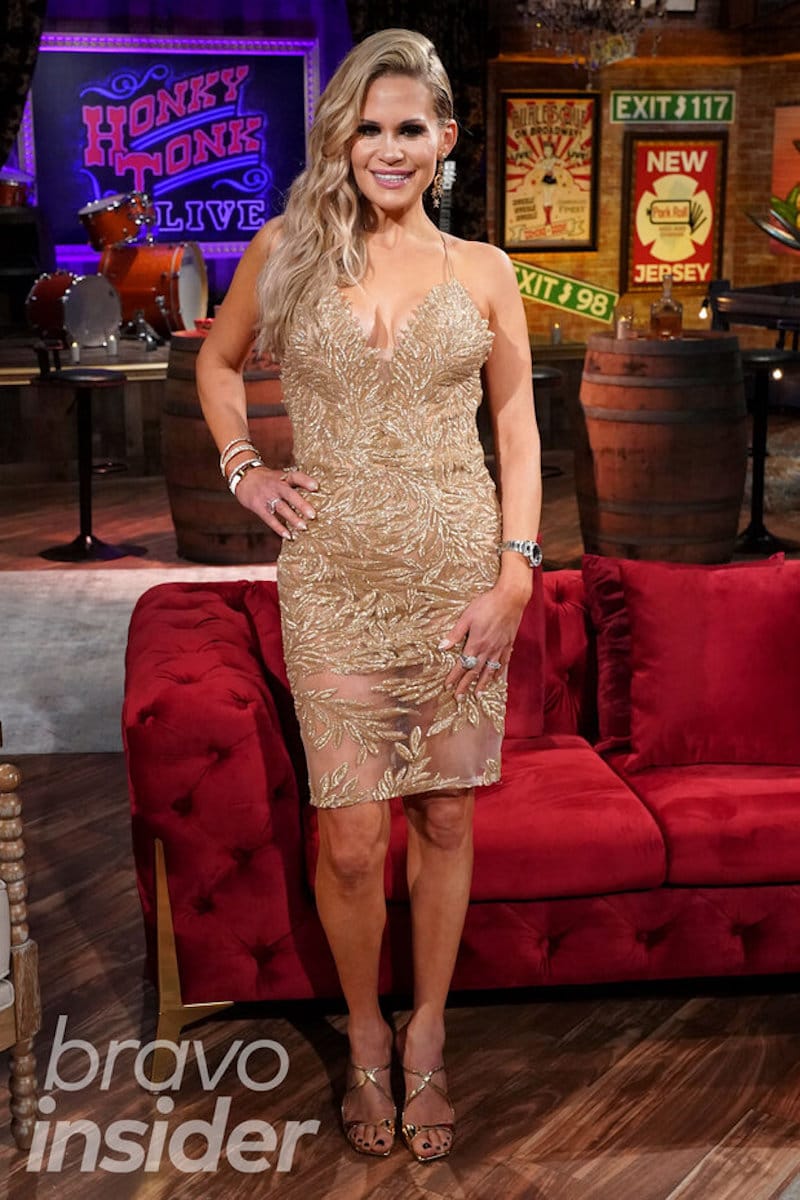 Jackie wore a Nadine Merabi dress and shoes by Jimmy Choo. Her rings were David Yurman, her earrings were Jennifer Behr, and her watch was made by Rolex. She also sported a Hermès bracelet and bangles from Saks as Jamal Tadros did her hair and Karlene Damallie was in charge of makeup. 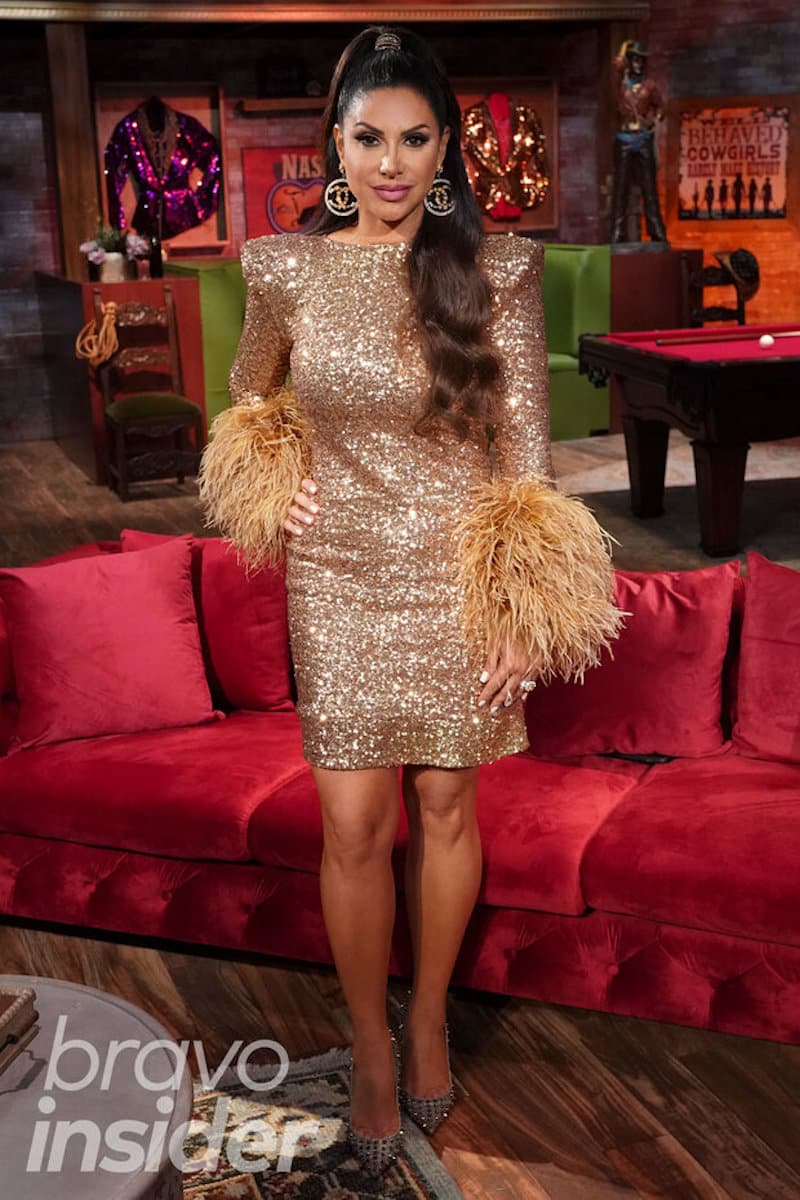 Jennifer’s dress, which featured feather accents on the sleeves, was from Estrada Twins, her shoes were Christian Louboutin, and her earrings were Chanel.

Jennifer also wore a ring from James International Collection as Ashley Raibick did her hair and Drita Paljevic did her makeup. 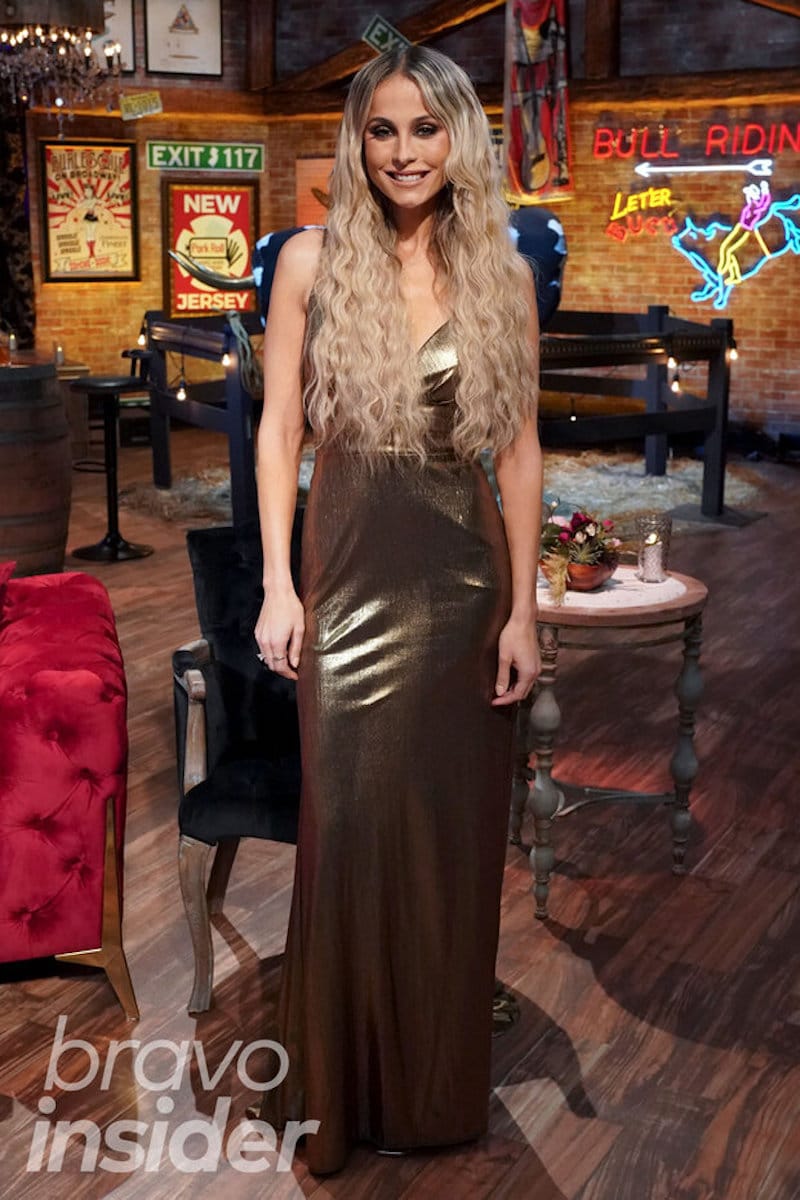 Traci, who was featured in a “friend” role amid her debut season on RHONJ, wore a metallic gold Mac Duggal dress with Jimmy Choo shoes and had her hair and makeup done by Jan-Marie Lozada and Cara Lovello, respectively.