Kathy Hilton and Kyle Richards appear to be in the midst of yet another family feud.

Following Wednesday night’s episode of The Real Housewives of Beverly Hills, which saw Kyle shutting down Kathy as she attempted to promote a tequila brand she’s invested in — and poking fun at her excitement for the spirit, Kathy has reacted to a fan shading Kyle as “trouble” and reposted her daughter Paris Hilton‘s comment about Kyle being “so unkind.”

After Bravo Housewives shared an article about the double standards of Kyle, who has consistently promoted husband Mauricio Umansky‘s real estate firm, The Agency, in recent years, one of their followers posted a shady message about the series’ longest-running cast member.

“Kyle is trouble,” the person wrote, as seen in a screenshot shared by Bravo and Cocktails on Instagram.

And in response, Kathy shared a series of heart-eyed emoji, seemingly confirming she appreciated the claim. 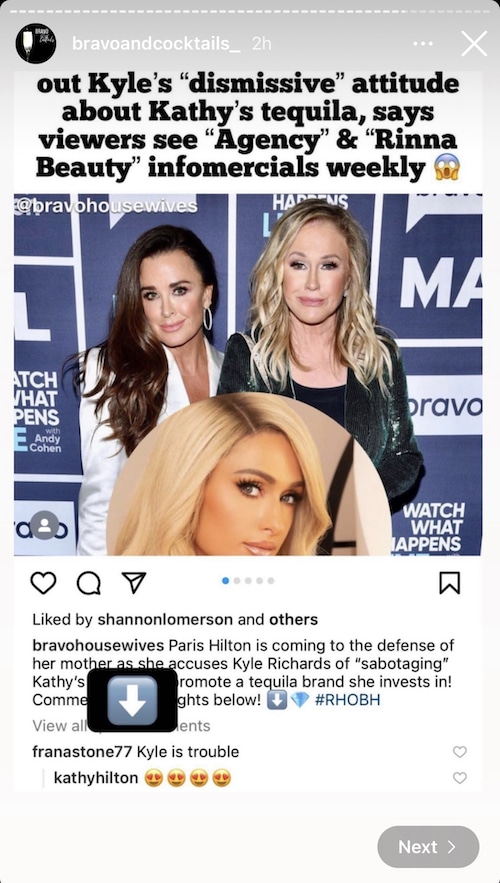 In another Instagram Story, shared by Kathy herself, she re-posted a message from a fan, who offered a screenshot of Paris calling her aunt Kyle “so unkind” and told the RHOBH cast member she was “ready for a shot.”

As seen in the post, Paris had responded to a viewer who said her mom looked “so cute” and “excited” to show off the tequila before Kyle scoffed at her efforts and many of the other women joined in.

“It was so sad to watch,” the fan had written. 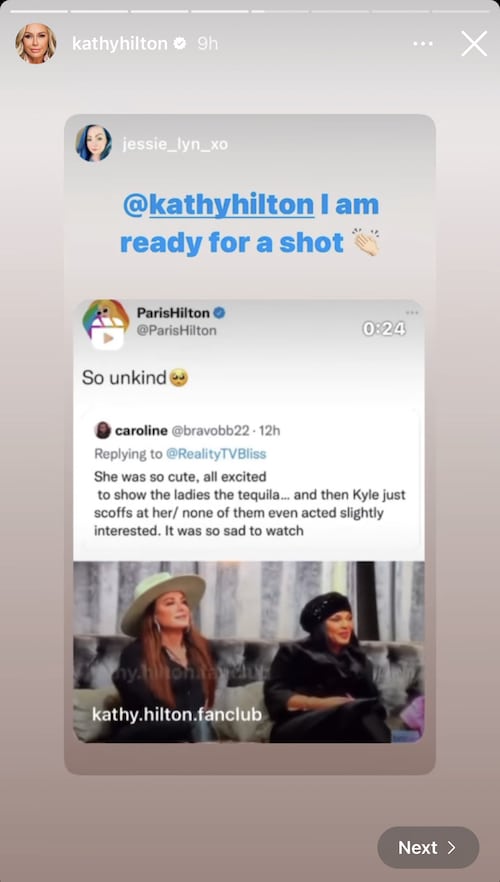 As Kathy re-shared daughter Paris’ diss of Kyle on her Instagram Story, former cast member Denise Richards reacted to Paris’ message on Twitter, saying that she too felt badly for Kathy as she was shut down by Kyle and equally put off by Lisa Rinna getting in on the action.

“I felt bad for her you could see her feelings were genuinely hurt [and] the preview with Rinna going out of her way to take a dig,” she tweeted. 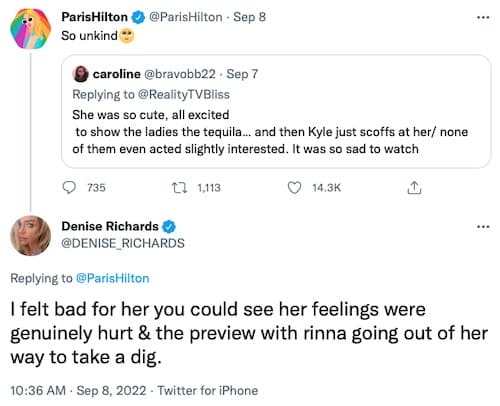 As RHOBH fans may have heard, Denise recently addressed her potential return to the show during an interview on Jeff Lewis‘ SiriusXM Radio Show, Jeff Lewis Live, denying claims that she’s refused to return until Lisa is off the series.

“I would be fine with working with Lisa and filming with her. I never said that I wouldn’t go back because of her,” she clarified. “[But] I will say this: Lisa Rinna, she plays dirty, and she can be really nasty. So I think that’s just something to know about with her being on the show.”

Also during the interview, Denise revealed where she stands with Kyle.

“I actually ran into her two days ago. It’s fine,” she said. “Actually I sent her a text saying, ‘It was great running into you and we should get together and catch up.’”