Home Real Housewives of Beverly Hills News Lisa Rinna Missing From BravoCon Lineup Amid RHOBH Exit Rumors and “Difficult Time” on Season 12, Plus What She Told Fan as Diana Will Also Be Absent

Lisa Rinna Missing From BravoCon Lineup Amid RHOBH Exit Rumors and “Difficult Time” on Season 12, Plus What She Told Fan as Diana Will Also Be Absent

The two Real Housewives of Beverly Hills stars who were noticeably missing from the RHOBH: After Show for season 12 will also be absent at BravoCon 2022.

Ahead of the October event, which is expected to feature several cast members from the Los Angeles-based series as well as tons of others from the Bravo universe, it has been confirmed that neither Lisa Rinna nor Diana Jenkins will be present — at least as it stands currently.

“[Variety] shares the full [BravoCon] lineup with one notable absence… Lisa Rinna. The confirmation comes following the filming of the RHOBH reunion last week, which we know followed a tough season for Rinna. If I HAD to GUESS, this points to the fact that Rinna is out of [RHOBH] with an announcement soon to come. JUST A GUESS. Just MY guess. What are your thoughts?” Christian Gray Snow announced to his followers on Instagram on September 14. 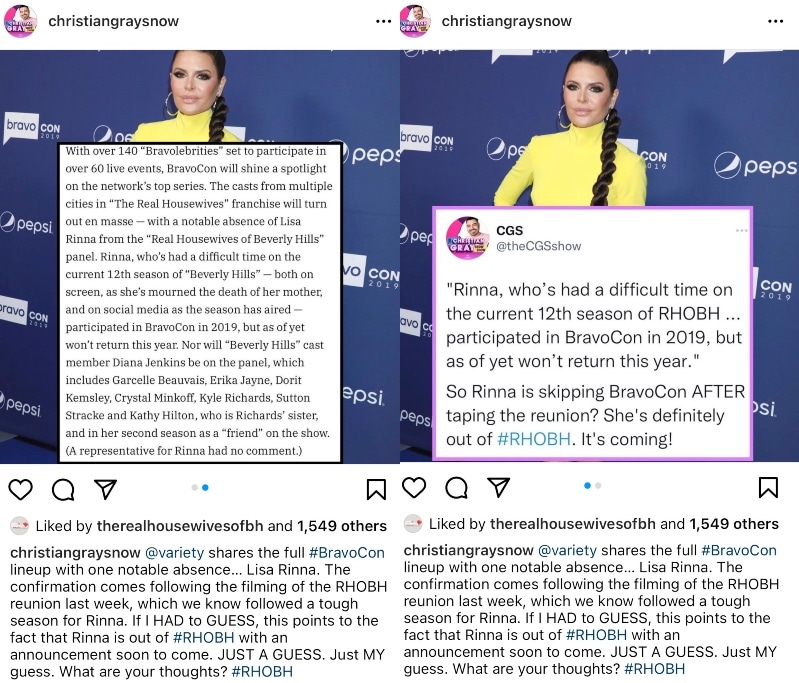 In Christian’s post, a number of excerpts from Variety were seen, including a statement about Lisa’s rough 12th season of RHOBH, which saw her mourning the death of her mother, Lois Rinna, who died amid production on the season in November 2021, and a mention of the backlash she’s received on social media as a result of her verbal attacks on her castmates.

The outlet further noted that Garcelle Beauvais, Erika Jayne, Dorit Kemsley, Crystal Kung-Minkoff, Kyle Richards, Sutton Stracke, and Kathy Hilton would be featured on the RHOBH panel at the event.

Meanwhile, in the comments section of Christian’s post, the Best of Bravo said that months ago, Lisa had blamed her impending BravoCon absence on a wine-related commitment.

“I asked Rinna why she wasn’t going a couple of months ago and she said she will be doing something with her new Rinna Wine lols,” the fan page shared.

But in response, Christian said he had gotten conflicting information from the cast member, writing, “That’s funny [because] she told me a completely different reason before she blocked me.” 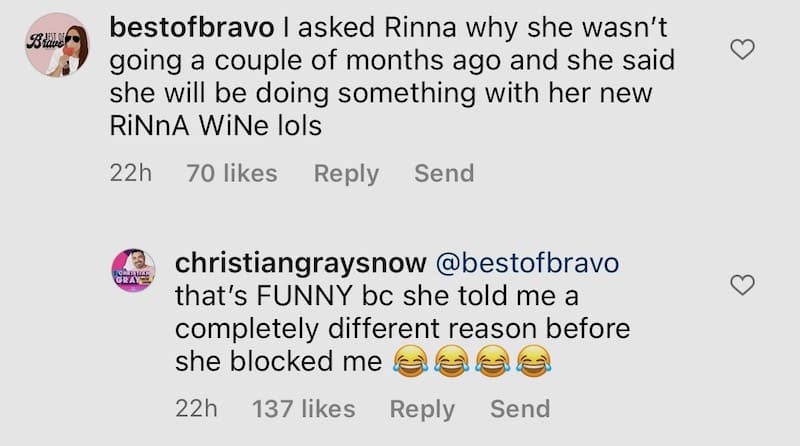 As fans may have heard, rumors have been swirling in regard to Lisa’s possible exit from RHOBH in recent weeks, especially after she was caught telling someone on Instagram that she has to get the show “out of [her] life.”

“I’m so sorry I have to block you now I can’t see any more housewife stuff I think you’re the greatest I just have to get it out of my life,” Lisa wrote.