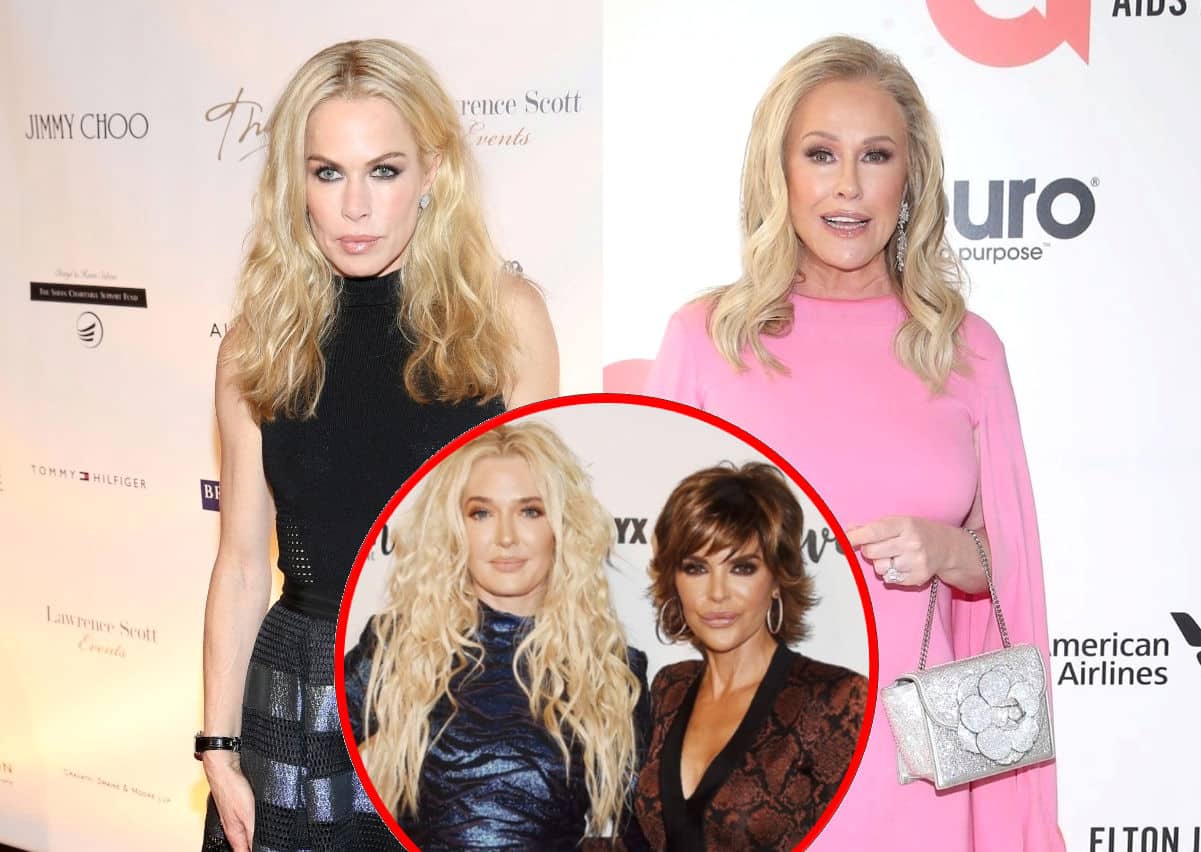 The Former Real Housewives of Beverly Hills star Kathryn Edwards is back again and giving her two cents on the escalating drama amid the Lisa Rinna and Erika Jayne vs. Kathy Hilton situation. In a very detailed new interview, Kathryn is claiming that Bravo is trying to save Lisa, Erika, AND Kathy Hilton for ratings gold. Plus, she is adamant that Kathy never used a “gay slur” as she slams Erika and Lisa’s friendship.

Speaking with David Yontef on his podcast, Behind the Velvet Rope with David Yontef, Kathryn said she doesn’t believe Kathy would have used a “gay slur” amid an outburst at The Caribou Club in Aspen, Colorado, as Kathy isn’t a woman who “curses” and has many gay friends.

“I personally don’t believe she said it for two reasons. I think she has a lot of friends in the gay community. A lot. And the second thing is she is adamant about not cursing. Adamant. She doesn’t.”

However, Kathryn does admit that she believes Erika may have thought she heard Kathy use derogatory language due to the club being “loud,” and Kathy very well could have been having a “meltdown.”

“I’m not saying that Erika didn’t think she heard it, if the music was loud and you know, there’s a bunch of people and there’s a lot of noise,” Kathryn said. “I’m not saying that I don’t think [Kathy] had a meltdown and didn’t say she wants to ruin Kyle [Richards] and all the other things. [But] if there’s one thing, I don’t believe is that she said [the gay slur],” she told the outlet.

Kathryn continued to elaborate on the fact that though there is no actual footage of Kathy’s alleged “meltdown,” she does believe it happened, but it may have been blown out of proportion.

“She was having a meltdown to some degree. So, I’m not going to give her a pass in saying that. I [don’t] believe she’s like some angel. I think when she lets it blow, she lets it go.”

When it came to the very heated season 12 reunion confrontation between Lisa, Erika, and Kathy, Kathryn believes Bravo “edited the heck” out of it and that it went on “much longer” and got “uglier.”

“They edited the heck out of that… I’m sure that was their way of trying to save Kathy, Erika, and Rinna, and the show. Cause I bet it got ugly,” the RHOBH alum alleged. “I mean, listen, that combination. They wanna save everyone one of them if possible.”

“Truthfully, I think if they have to give up somebody, I think they’ll give up Kathy. They’ll let Kathy go and they’ll try to find someone else [to go against Lisa]. Cause Kathy’s not going to do what Rinna does.”

Kathryn also believes that Kathy’s recent demanding behavior and ultimatum to Bravo may contribute to her potential firing.

“I [think] they’re happy to get rid of that salary,” she said. “They can have a clear conscience, like, we gave it to her, we paid her a nice hefty check for a season, and you know, she can ride off into the sunset.”

The interview then took a spicy turn when Kathryn revealed that she believes Lisa and Erika, aka Thelma and Louise, aren’t as loyal to one another as they like to publicly let on, and they would gladly throw one another “down the river” to save their own hides.

“[Erika’s] standing behind Rinna because that is all she has. She has zero loyalty. None,” Kathryn slammed. “Trust me, I really do believe if someone else came on the show and she had to turn on Rinna, she’d turn on Rinna.”

Kathryn has just as little faith in Lisa’s loyalty to Erika as well, and she believes they’re both desperately clinging to their roles on the show.

“Truthfully, I think Rinna would chuck Erika down the river. Those two are peas in a pod… they’re both like survivors,” Kathryn claimed before driving the knife deeper into the pair’s integrity. “I don’t wanna say over their mother’s back because I’m very sensitive to Lois, but honestly, I don’t think that there’s a lot of people that they are loyal to or care for.”

Speaking of loyalty, though Kathryn admittedly “loves” Kyle Richards and thinks she’s a “sweetheart,” she says she expected more loyalty from Kyle’s side when Lisa and Erika were coming for her sister Kathy.

“When Kyle said, ‘I didn’t hear those things,’ honestly, I love Kyle, but for me, that’s not enough. That’s not good enough. If my sisters just offered that up while my head’s on the chopping block, I would be pissed and I’d have words about it,” Kathryn said.

Maybe it’s because Kyle believes what Lisa is revealing about Kathy to be true, Kathryn mused. She pointed out that Kyle had recently revealed in the press that she was glad that everyone sees what she must go through with her family.

“Maybe because a lot of what Rinna is saying is true. Right? Not to the point where the general public wants to condemn Kathy for saying it. And I don’t believe Rinna was shook and fearing for her life and gonna get cancer. She didn’t share it with the world. But I think that Kyle even said, you know, I’m glad that everyone saw what I was going through. So, there is that.”

Still, Kathryn decidedly made it clear that she doesn’t believe Lisa is Kyle’s friend, and Kyle and Kathy’s trauma goes all the way back to their childhoods, and their wounds are too deep-rooted to be repaired on a reality show like RHOBH.

“It goes really deep probably to their childhood, I’m sure,” Kathryn said. “But my feeling is… family unites you. You don’t go against your family when you’re sitting there on that sofa, and you know damn well that Rinna really is not your friend. Erika is really not your friend. When the show’s over, I’m curious how much they’re all [actually] going to hang out.”

The former housewife also speculated that viewers will never fully know what events truly transpired surrounding the online bots that were bought targeting Garcelle Beauvais’ 14-year-old son Jax. She also boldly alleges that if Bravo were somehow involved in any way, it would be the end of the show.

“I don’t think the public’s ever hearing about that stuff. That would be the end of the franchise then? I mean, everyone would be like, ‘this is so fake.’ What kind of network does that to their cast members? Especially with a 14-year-old kid. Like, you can’t, that’s just not okay.”

What are your thoughts on Kathryn’s many, many opinions?