RHOBH’s Kyle Richards on What Wasn’t Seen of Kathy Hilton Drama, Kathy Being “Disrespectful” at Club, & Erika Making Fun of Lisa Vanderpump, Plus Erika’s Comment About Dorit and PK 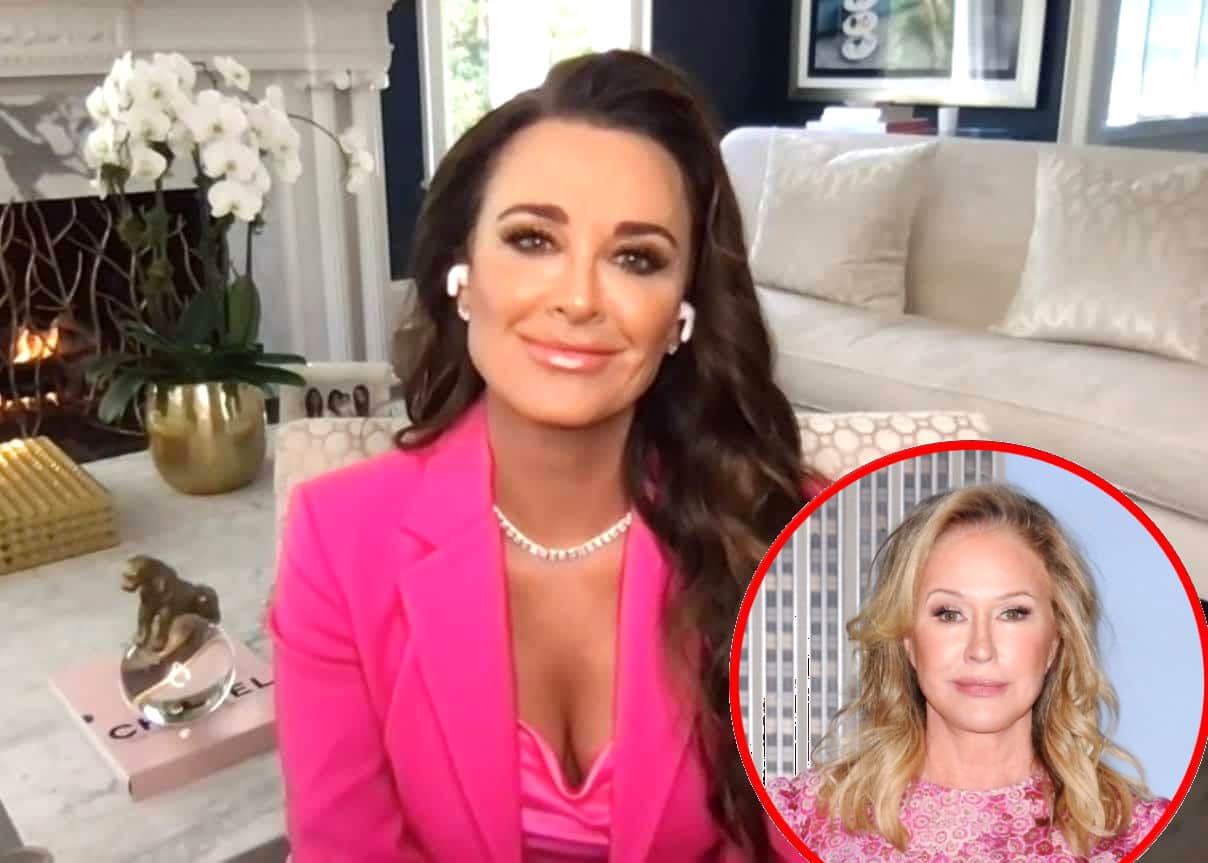 As she looked back at the taping on Teddi Mellencamp‘s podcast, Kyle shared her thoughts on Erika Jayne‘s negative comments while also dishing on Kathy Hilton‘s behavior at the Aspen nightclub where her meltdown began, explaining what wasn’t revealed about their tequila drama, and more.

“I didn’t like that,” Kyle admitted of Erika’s poor treatment of LVP on the October 28 episode of Two Ts in a Pod. “It made me very uncomfortable. I know Erika was mad because Vanderpump had made that comment about the scratch-and-sniff book… But I didn’t like that. I don’t think that’s nice.”

During the reunion, Erika doubled down on her claim that Lisa “reeks of garlic, cigarettes and chardonnay,” which she made after Lisa targeted her intelligence in response to learning that she shared a video of Garcelle Beauvais‘ book in the trash. (Of course, we’ve since learned that it was actually Lisa Rinna who put it there.)

Also at the reunion, Kyle found herself wondering why her RHOBH castmates didn’t speak up more about the way Kathy spoke to her at the club.

“It was the way she spoke to me and everyone saw that. But nobody spoke up at the reunion. I don’t know [why]. I think they don’t wanna deal with it. But everyone saw,” she said.

According to Kyle, Kathy demanded she leave the club after the cast’s security person took their coat check tickets and went to get another group of people they’d invited to join them from a block away.

“He had the tickets to our coats in his pocket. We hadn’t even sat. [Diana Jenkins] had just given [her] credit card and then Kathy came up… ‘We’re leaving right now.’ And you know, I think when you’re the youngest… Sometimes I’m spoken to like I’m still a little girl, and um, it just was very disrespectful,” Kyle recalled, admitting that she gets “so scared to talk” about the issue due to the headlines it creates.

Following the sisters’ encounter, Kathy went back to Kyle’s home with Lisa Rinna, who hadn’t yet checked her coat, and proceeded to say a series of horrible things about her sister — some of which Kyle will likely never know about.

Among Kyle’s regrets of the 12th season was her reaction to Erika lashing out at Garcelle Beauvais‘ 14-year-old son, Jax Nilon, who Erika screamed at during Garcelle’s birthday party, telling him to “get the f-ck out of here.”

“I didn’t see that. I was told about it and I never should’ve commented on something I hadn’t seen,” Kyle admitted. “I can tell you when we got the episode, [Dorit Kemsley] and I spoke and she’s like, ‘Kyle, I’m mortified. That was terrible,’ and we’re sitting there talking about it. I said, ‘That’s how I feel and I didn’t even see it. Why the hell was I talking about something I hadn’t seen?’”

Continuing on about her husband Mauricio Umansky, who was seen laughing and joking alongside Kyle, Dorit, and Paul “PK” Kemsley upon hearing of the incident, Kyle said he “always makes a dumb joke.”

“I was mortified because obviously being a mom comes first to me, more than anything, and then to see the way Erika spoke to Jax and how it came out… Horrible, horrible,” Kyle recalled, noting that she hopes Garcelle knew her apology “was genuine.”

Moving on to the tequila drama of season 12, Kyle said that a lot took place off-camera. In fact, she went out of her way to ensure her sister’s tequila would be promoted on the show before the group arrived in Aspen.

“Before Aspen, she said, ‘We’ve invested in this tequila company. Do you care if I bring it to Aspen?’ And I said, ‘Not at all. send it to my house. We’ll mix drinks with it, I’ll put it out,’ and that’s exactly what we did,” Kyle shared. “[But] at the Kemo Sabe event, I didn’t even know the tequila was there. I didn’t even know it was on the bar. I knew nothing.”

So when Kathy brought up the issue at the reunion, saying, via Kyle, “I thought it was gonna be an event for me and my tequila,” Kyle was “speechless.”

“I was like, ‘Why would you think the shopping event would be a thing for your tequila?’ It didn’t make any sense,” Kyle reasoned, adding that she would have been happy to have promoted Kathy’s tequila had she asked.

As for what went down in the scene, Kyle recalled Kathy accusing her of doing “nothing to stop Rinna,” but she pointed out that she was busy at the time that Lisa made a spectacle of another brand of tequila: Kendall Jenner‘s 818.

“When Rinna is ordering the tequila, I’m literally, I didn’t even hear her. I was tying my dog’s leash up so she wouldn’t run around Kemo Sabe,” Kyle revealed. “I didn’t know any of this. So when I saw that, I was like, ‘How does she expect me to know this?’ …[And] a lot of people like Kathy’s tequila, to be clear.”

When Teddi then mentioned that Andy Cohen had said Kathy was “mocking Rinna ordering the 818 tequila,” and said Kathy made it Kyle’s fault at the reunion, Kyle said that was exactly what she was “upset” about.

“Because that’s a pattern. It feels like I can do no right, is the problem. And there’s a lot of history there and it’s really hard and sometimes,” Kyle explained. “I’m quiet because it’s easier for me in my life not to address these things because I don’t want to make things more complicated for me… I’d rather just put my hands behind my back and take it on the chin and deal with it because it’s not worth it for me.”

During another moment of the podcast, Kyle reacted to Erika proclaiming that Dorit and PK would be next to divorce at BravoCon.

“I was so shocked and honestly, I mean, I don’t know why she did that because I know PK and Dorit better than anybody in the group. They’re a really loving and supportive couple. They have a beautiful family. We travel with them and I just don’t know why throw something like that out there,” Kyle said. “She later said she was joking but jokes are supposed to be funny… I thought that was really unnecessary.”

Although Erika did suggest that she was joking after making the comment, she later explained why she did so on a Watch What Happens Live: After Show, signaling to past rumors about the couple, their supposed swapping, and the supposed “issues in their marriage.”