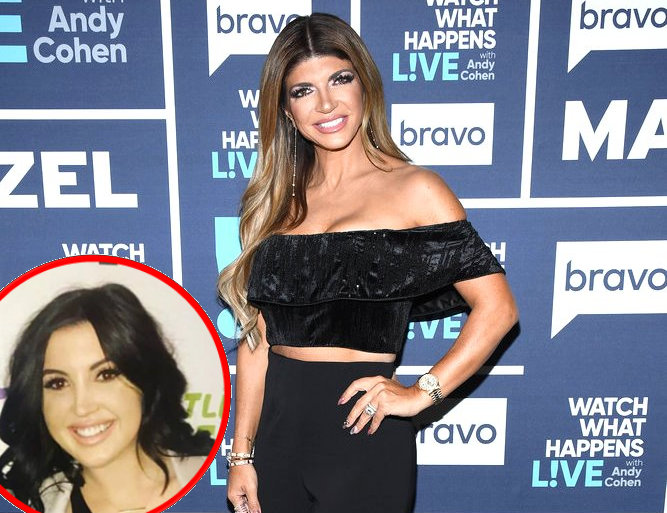 The current season of the Real Housewives of New Jersey might be over but we all know the drama is year round!

Case in point, Teresa Giudice did an interview last week during which she viciously slammed Caroline Manzo and Jacqueline Laurita when asked about the possibility of them returning to the RHONJ next season. She called them “evil” and said the only reason they would come back to the show is because “they need the money.”

Jacqueline’s daughter Ashlee Holmes didn’t take too kindly to Teresa insulting her mother and aunt and took to Twitter to let Teresa have it.

Ashlee tweeted, “I have never met a bigger hypocrite in my life than Teresa Giudice. She’s an idiot who let ‘fame’ (for being trash) go to her head. When I see her STILL doing interviews going on hate RANTS about my family… I’m not surprised. She’s hateful and vindictive.” She has since deleted the tweet.

In an interview with The Morning Breath, Teresa responded to Ashlee’s “nasty” tweets, while insisting fame hasn’t gone to her head.

Teresa continued, “And she just tweeted something nasty about me. That TV has gone to my head. No it hasn’t. Like I’m still the same person I was when I started the show. I am, I mean ask Priscilla because I met Priscilla after my first season… So I’ve never changed if anything. I’m very real.” Priscilla is her make-up artist by the way.

Teresa was also asked about Siggy Flicker’s departure from the show, and she made it clear that leaving the RHONJ is best for Siggy.

“I mean am I sad that Siggy is leaving? Yes, but it wasn’t for her,” said Teresa. “It just wasn’t for her. Like she would take everything so personal and I’m like don’t read the tweets. Don’t read anything. And she’ll be like ‘okay no problem’ and then two seconds later.” Indeed, Siggy has been known to go on her never ending Twitter rants.

Finally the topic turned to Danielle Staub who was confronted during the reunion about having sex with her boyfriend in the bathroom of the Gorgas’ restaurant during their opening party. The hosts wanted to know if it was hypocritical for Danielle to claim she was so hurt by being called a “prostitution wh*re” by Teresa and then engage in bathroom sex on a reality show. By the way Bravo chose not to air that scene.

Teresa, who confirms the bathroom deed took place, refused to take the bait and simply stated that Danielle is free to do as she wants. “I mean whatever. She’s very open with her sexual life. I don’t know, I changed in that way. Like before I would be like ‘oh my gosh’ like when I first started the show. I did grow up very sheltered, but you know what, hey if you want to have sex in the bathroom, have sex in the bathroom,” she stated.

She also added that her prison term and loss of her mother has given her a new perspective on life.

“After what happened to me, you live one life. Have a good time. You never know how long you’re going to be here,” said Teresa. “I mean I’m just saying. Like look at my mom, she was 66. I think that’s what made me get my grove back too. I just live everyday like it’s my last because my mom was young and I never expected to lose her.”

TELL US – WHAT ARE YOUR THOUGHTS ON TERESA’S COMMENTS?