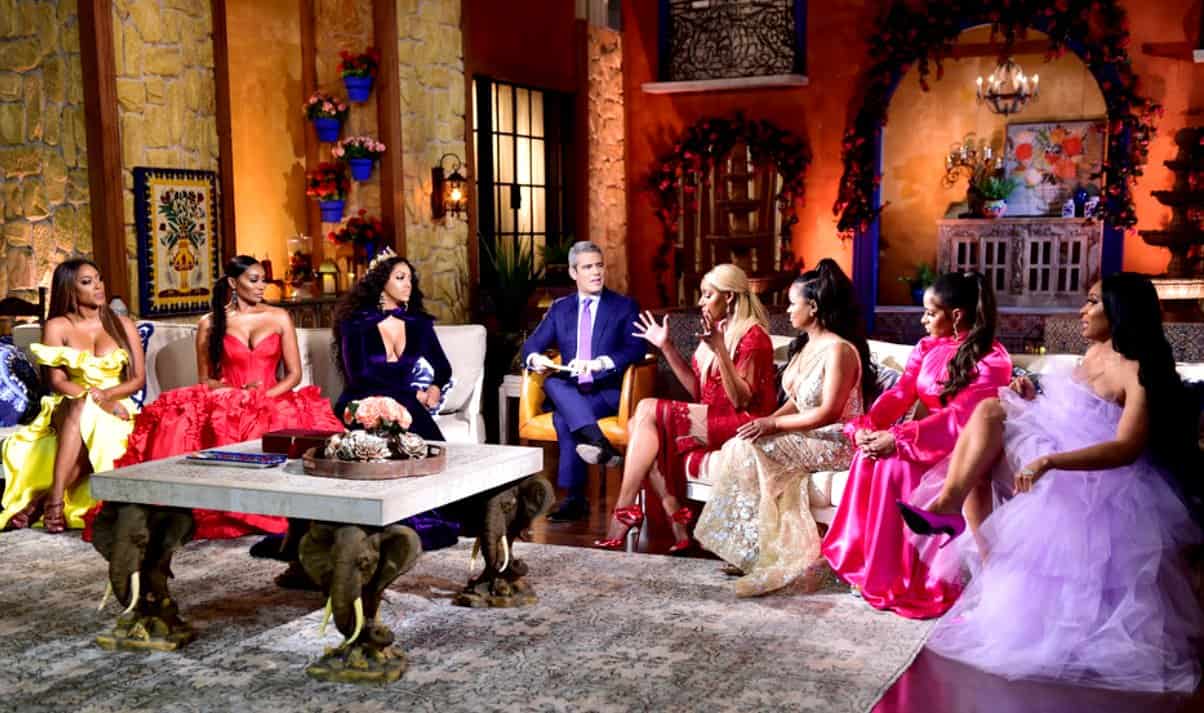 The Real Housewives of Atlanta peaches reunited last night to rehash the all the drama from their landmark 10th season, and as usual, they held nothing back!

Before the greetings were even complete, Kenya surprised everyone by announcing she and her new husband, Marc, are expecting a baby “later in the year”, but wouldn’t elaborate further.

We’ve come to expect this sort of secrecy from Kenya lately. This is a woman who lives her entire life on reality television, but chose to elope without telling anyone for months that she was married. Why?

According to Kenya, when Marc proposed to her, the show was “the last thing on her mind”, and she just wanted to be Mrs. Daly. All of the women were kept in the dark—even Cynthia. But Kenya said that was because Cynthia “can’t hold water”, meaning she can’t keep a secret, and Kenya didn’t want the added pressure of publicity to affect her marriage.

And a strange marriage it is. Kenya’s own father didn’t attend her wedding, nor did her in laws, who she says were on a cruise at the time. She also revealed that she’s only met Marc’s parents over the phone because they live in another state.

It was clear that Kenya didn’t like being questioned about the particulars of her private life, but she had no problem spilling all of Marlo’s tea when she joined the ladies on the couch, and it was steaming hot!

Kenya and Marlo were pretty good friends at one time, but Marlo said she felt that Kenya had simply been using her to get back at NeNe. Kenya denied this, and said that she was no longer friends with Marlo because of the nasty comment she made last season about Kenya’s own mother not “wanting her”.

It had been a low blow, for sure, especially because everyone knows that Kenya’s estrangement from her mother is a very sensitive subject for her.

The two women bickered last night, with Marlo commenting about Kenya’s skin problems, and Kenya telling Marlo, “you’re the only woman I know with a square reader between your legs!” (best line of the night, by the way).

But things took a more vicious turn when Kenya basically said that Marlo was a prostitute… an implication  that’s been made so many times before, that I’m starting to believe it..and that she had tried to blackmail NeNe!

Longtime viewers may remember a man named John that was dating NeNe during the time that she was divorced from Greg. He enjoyed giving NeNe lavish gifts, which she accepted despite not quite feeling a love connection.

At some point after that, Kenya claimed that Marlo began “dating” him, and conned him out of $20,000, before stealing his phone, and attempting to blackmail NeNe with the texts and phone calls between them.

Apparently there was some truth to these allegations because Marlo said that she regretted the incident, and apologized to NeNe for causing her any problems.

And speaking of problems, much was made of the fact that Porsha just can’t seem to get along with any of the women, and at some point has argued with just about all of them.

Of course, Porsha’s biggest issues were with Kandi, who is still understandably angry over Porsha’s claims that she and her husband, Todd, were plotting to drug and rape her.

Porsha has apologized many times, but  Kandi just hasn’t been ready to accept it, and last night, she said that she still didn’t feel that Porsha understood the full scope of what she’d done, and that allegations like that could have “killed her whole brand”.

That’s certainly true, but Porsha was at  a loss as to what more she could possibly do to make amends, and said that Kandi enjoys playing the victim, and won’t let it go until Porsha fell on a sword, and drew blood.

They’re probably both right. The allegations were terrible, and more importantly they were completely false, and absolutely could have done irreversible harm to Kandi’s reputation and career.

At the same time, Porsha claims she was duped into believing those allegations, and has expressed regret. But the show’s  filming schedule made it very difficult for Kandi to take the space she needed to get over it.

Just weeks after everything came to a head at last year’s reunion, the ladies began filming season 10,  and Kandi was forced to spend time with Porsha before she was ready.

Porsha was getting along with Sheree all season, but then Sheree found out that Porsha had told Shamea that she didn’t trust any of the other women, including Sheree.

Sheree said that she was the only one of the women who had Porsha’s back, and that it was unfair for her to say that she wasn’t trustworthy.

And Sheree did have her back, but Porsha made an excellent point when she said that it was difficult to trust someone who called themselves “the bone collector”,  and besides, as she watched the show, she saw Sheree making plenty of petty comments about her.

Porsha must have been uncharacteristically insightful because she asked a very interesting question: did Sheree trust HER? Sheree admitted that she didn’t, and, to be honest didn’t trust any of the ladies because they were always talking about each other, but maintained that while she may collect bones, she only did so to make the women aware of their own behavior. How big of her!

Still deflecting, Porsha decided to bring up the video that Kim had sent to everyone while they were in Barcelona, and the fact that Sheree had known about it all along, but had chosen not to warn NeNe about it.

Sheree had to admit this was true, and apologized to NeNe for not telling her what Kim was up to, but also said that she didn’t quite know where she stood with NeNe, and whether they were truly friends.

Sheree said that she and NeNe were quite close when NeNe and Greg first arrived in Atlanta, but felt that NeNe had just used her to introduce her to the lifestyle and get her into clubs because Sheree had been “that girl”, but that NeNe had dropped her once she no longer needed her.

NeNe, of course, denied this, and said she’d always been “that girl”, and hadn’t needed anything from Sheree, but that she’d never felt close to Sheree because she never let anyone in, and kept everything to herself.

It’s true that Sheree keeps things close to the vest. It’s difficult to get a straight answer from her about anything. Even when  asked about her fashion line, “She by Sheree”, she stumbled and stammered about her plans for the business, saying she would be releasing a “lifestyle” line in “March or September”, and became pretty  defensive when the other ladies tried to get a more definitive answer.

The one area of her life that she did open up about this season was her budding romance with her prison bae, Tyrone. He’s behind bars, so we haven’t met him yet, but Sheree is quite taken with him, for some reason, and hasn’t been shy about sharing it.

The other ladies had been surprised by Sheree’s choice to date an inmate, particularly NeNe, who had known Tyrone prior to his romance with Sheree or his stint in prison, and claimed that he was a “con artist”.

Tyrone told Sheree that NeNe should keep her mouth shut because he had plenty he could say about her too. NeNe had become defensive about this, and quickly denied dating Tyrone, although no one had said anything about dating.

It was an odd reaction, and the others had been curious about why she was getting so defensive, but when Andy Cohen spoke with Tyrone over the phone before the reunion began, he shed some light on why NeNe seemed so nervous about her past with him.

According to Tyrone, NeNe had come on to him “very aggressively” when they first met, and had proceeded to “stalk” him when he didn’t return her affections! Well, that certainly explains a lot, but hey, it’s NeNe’s word against a convict’s, so she wins.

We’ll get to hear more about Tyrone when part two of the reunion airs next week, and Kim is waiting backstage to take her seat on the couch, as well, so there’s plenty more drama to come. Stay tuned!

TELL US – WHAT ARE YOUR THOUGHTS ON THE RHOA REUNION PART 1?