Southern Charm’s Ashley Jacobs Posts Lengthy Public Apology to Kathryn Dennis, Then Admits Her “Only Motive Is to Feel Better”

Ashley Jacobs shared an apology to Southern Charm viewers and Kathryn Dennis on her Instagram page early this morning.

After reuniting with on-again, off-again boyfriend Thomas Ravenel over the weekend at a BBQ restaurant in South Carolina, Ashley posted a heartfelt message on her page, admitting that her season four behavior on the Bravo TV reality show “crossed a line.”

“To all the Southern Charm fans, in general. And to Kathryn, in particular,” she began.

“I owe you all an apology,” Ashley wrote. “I’d like to apologize for how I treated Kathryn, and how badly I disrespected her. I’m not sure what made me think it was OK to speak to a mother the way. It wasn’t. It was not my place to say anything at all, much less the reckless comments I made. I crossed a line and hurt people who don’t deserve it.”

During one episode in particular, Ashley slammed Kathryn as a bad mom and said she was nothing more than an “egg donor” to her two children, four-year-old Kensington and two-year-old Saint Julien.

Weeks after the shocking moment was seen on Southern Charm, Ashley told fans she now understands why her comments were so unacceptable to Thomas, Kathryn, and their co-stars.

“After many chats with my friends and family with children, I never understood the unbreakable bond a parent has with their child. I can listen and learn and be far more respectful in the future but until I’m blessed with a child I can never truly understand the sacrifices a parent makes on behalf of their children,” she explained. “Some children may not truly get it until they have their own baby. It makes me feel horrible that I may have taken my own parents for granted and thus I’ve learned a tremendous lesson from all the good parents out there.”

“I can’t rightfully describe how sorry I am, but I’d never forgive myself if I didn’t at least try,” she added.

After sharing her statement with her fans and followers, Ashley responded to critics who questioned her decision to apologize to Kathryn publicly, rather than contact her privately. Oddly, she admitted her main motive in posting this public apology is so that she can feel better.

“How do you know I have not attempted to apologize to her person to person???” Ashley asked a curious fan. “I’ve posted this online as an attempt to reach out to thousands I’ve additionally hurt. My only motive is to feel better. And yes it does make me feel better to apologize publicly so I may have peace with my own conscience.” 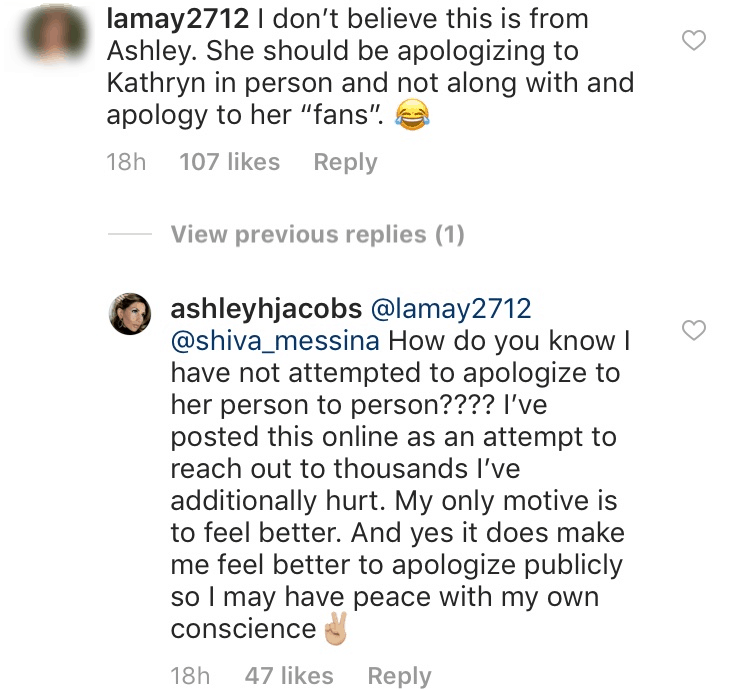 In another post, Ashley admitted that while she did apologize for her own benefit, she is also hoping her message will also help Kathryn “feel better.”

“You’re right I’m already feeling better as I have already made peace with my own conscience. However, you’re wrong if you think I don’t want Kathryn to feel better. I wish her only good things, always,” she said. 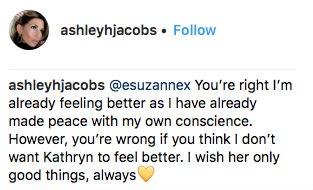 While a number of Ashley’s fans and followers doubted that she’s actually tried to contact Kathryn personally, Ashley said she’s attempted to meet with her on numerous occasions.

“I have tried to ask her to lunch/coffee so I could apologize to her person to person,” she insisted. “That’s all I can comment on that.”

Ashley and Thomas have both confirmed they won’t be returning to Southern Charm next season, amid reports that they both got fired.