Home Southern Charm Thomas Ravenel Announces He Has Quit Southern Charm! Find Out Why, Plus Ashley Jacobs Deletes All Photos of Him on Her Instagram Page

Thomas Ravenel Announces He Has Quit Southern Charm! Find Out Why, Plus Ashley Jacobs Deletes All Photos of Him on Her Instagram Page

Thomas Ravenel has just announced that he has quit Southern Charm.

On August 14, Thomas shared the news with his fans and followers on Twitter and suggested Bravo TV had “fictionalized” his story and taken advantage of him during his time on the show.

He wrote, “I’m not doing the show anymore. In the contract they have the right to fictionalize your story. They took advantage of me. I decided I’ve got too much to lose and informed them I’m not coming back.” 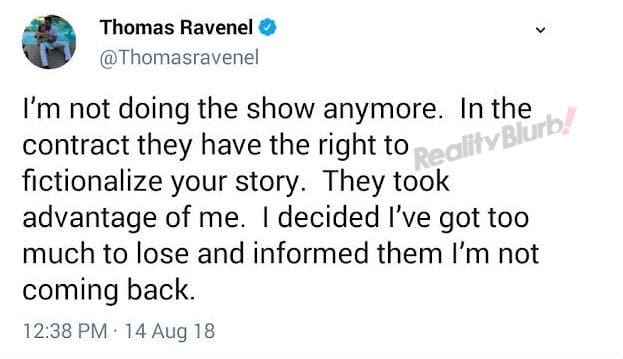 Thomas’s tweet is rather interesting as it was reported back in June that Bravo had fired him following allegations of sexual assault from two women, including his former Nanny.

Around the time that Thomas confirmed his exit from Southern Charm, his on-again, off-again girlfriend, Ashley Jacobs, reactivated her Instagram account and removed all photos of him from her page. As some may have heard, Thomas and Ashley reportedly split weeks ago but have since been caught spending time with one another in South Carolina.

Ashley also shared a new post with her followers, proclaiming a “new account” and a “new me.”

“As C.S. Lewis stated so beautifully, ‘You can’t go back and change the beginning, but you can start where you are and change the ending,'” she added.

While Bravo hasn’t said a thing in regard to Thomas’ exit announcement, the network confirmed months ago that they intended to investigate the ongoing claims of sexual assaults being made against him and promised “appropriate action” would be taken once all the information was gathered.

Thomas’s announcement comes just two weeks after his ex-girlfriend Kathryn Dennis confirmed Ashley would not be returning to the series next season.