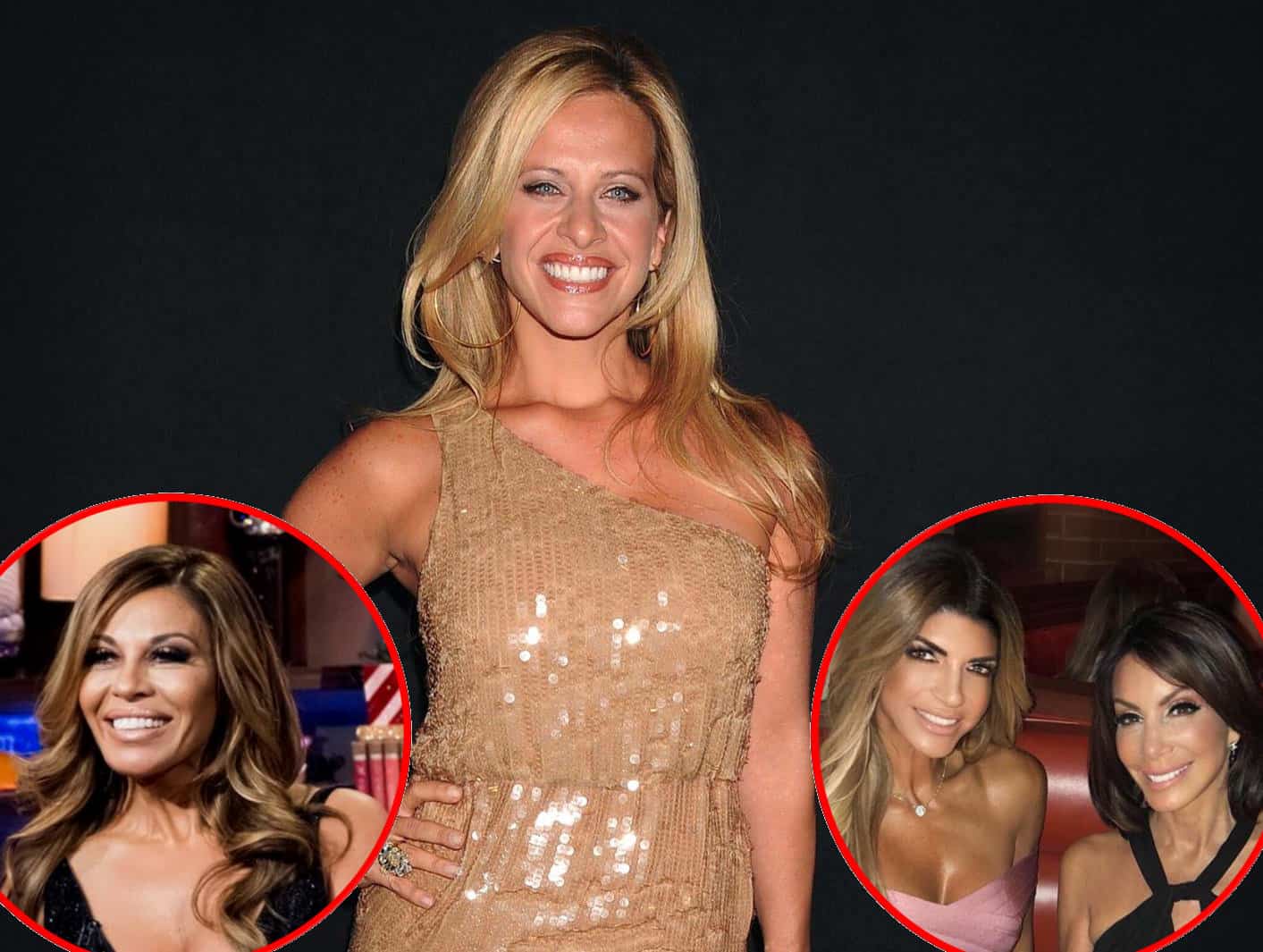 Dina Manzo, former cast member of the Real Housewives of New Jersey, is opening up about why she’s no longer friends with Dolores Catania, while also expressing skepticism at Teresa Giudice and Danielle Staub’s reconciliation.

Dina appeared on Sirius XM show Jeff Lewis Live on Wednesday during which she opened up about a number of topics. In part one of her interview, published yesterday, she finally revealed the real reason for her feud with sister Caroline Manzo, and discussed her engagement and suffering a miscarriage. In part two, she dishes on the RHONJ cast.

Dina was first asked if she still watches the RHONJ despite no longer being on the show, and her answer was no.

“Not on purpose,” explained Dina on why she no longer tunes in to the Bravo series. “I just don’t really watch TV much so I didn’t see much of last season at all.”

The topic then turned to Teresa and Danielle becoming close friends once again following their infamous feud on the early seasons of the RHONJ. Dina, who remains friends with Teresa, echoed the sentiment of many viewers of the show as she expressed her disbelief at the ladies becoming BFFs once again. In fact, Teresa was one of Danielle’s bridesmaids during her May wedding.

Dina first explained that she still remains on bad terms with Danielle.

“I mean, [Danielle] would go off on me on Twitter. And I’d be like, ‘Oh, I guess she’s having a bad day.’ Like I never really paid attention to it and then all of a sudden, her and Teresa are great friends,” said Dina.

She continued, “You know what’s so funny? I guess this is why I don’t make a good housewife because once I see someone’s character, I really can’t be close with them again. I can be civil, I can be friends, but to be close? I’ll never be close with that person. So, it kind of blows my mind when I see somebody like Teresa and Danielle. Like God bless her. I like that they’re nice to each other now. But they were enemies and now she’s the maid of honor at her wedding?”

Later on in the show, a caller asked Dina if she believes Danielle’s accusation that Dolores was bad mouthing Teresa to Danielle behind Teresa’s back. Dina didn’t mince her words, making it clear that her former best friend, Dolores, is not to be trusted.

“Yeah,” answered Dina. “Dolores and I were super close. Like season one, she was actually one of the original cast members that was supposed to come on as my best friend because we were best friends.”

Dina then told a story about why she stopped trusting Dolores.

“I’m going to be super honest cause I really don’t care. Nobody likes me there in New Jersey anyways. We were on vacation once with our kids that my ex was flipping the bill [for],” she shared. “[Dolores] was on the phone with someone who didn’t really care for my ex-husband. And she didn’t know that I could hear the conversation, like the cell phone was loud. He was trashing Tommy and his brother, and she was like ‘Yeah, yeah. They ain’t no good.’ And here I am hearing the whole thing. It turned me off so much. [I’m like] fine, if you’re not going to defend them, just say I gotta go, hang up or whatever.”

Dina adds that following that incident, she decided to take a step back from her friendship with Dolores.

“That’s what made me take a step back from our relationship but I didn’t say anything because I was like now I know, let me just downgrade the friendship. I’m not going to hate her,” explained Dina. “Then after that, something happened and she started hanging out more with Jacqueline [Laurita]. She wanted to be back on the show… And then all of a sudden, she just didn’t talk to me anymore.”

She added, “So that’s why I do believe she would say something negative [about Teresa].

When asked why she left the RHONJ again after season six, Dina responded: “I moved!” adding that she would have “maybe” continued filming had she remained in New Jersey. Dina now resides in California with her fiance Dave Cantin.

And just hours ago, Danielle took to her Instagram page to post a throwback photo with both Teresa and Dina. Perhaps this is her way of trying to take the high road after Dina’s interview.

She captioned the pic: “#strong #og game ……#throwback with these beautiful girls #rhonj. @teresagiudice @dina and yours truly.”

TELL US – THOUGHTS ON DINA’S COMMENTS?