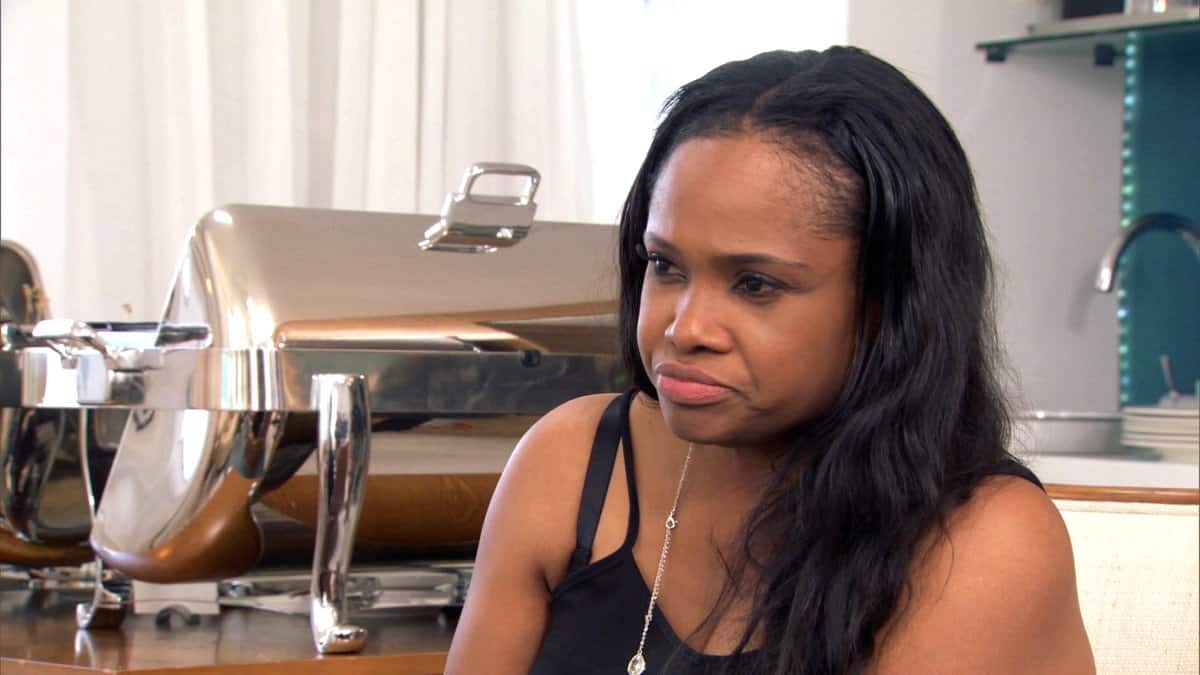 The Married to Medicine crew brought quite a lot of drama last night.  We finally saw Quad and Dr. Greg come back into the fold, Dr. Contessa is facing a scary medical issue, and Heavenly took Simone and Jackie on a trip to her  hometown that none of them are likely to forget anytime soon!

When we picked up with the gang, Toya and Dr. Eugene were discussing the prospect of him hosting a guy’s only barbecue at their home, and inviting Dr. Greg to come hang out.  Toya wasn’t so sure that was the best idea, considering the state of he and Quad’s marriage, but Eugene said that Greg was his friend, and he hadn’t done anything to him, so he wasn’t going to leave him out of the festivities.

When the guys showed up, they were all full of advice and concern for Greg, who revealed that that things hadn’t improved at home.  Greg said he and Quad lacked any sort of connection these days, and he no longer felt like she had any desire for him, whatsoever.  Cecil advised him to keep fighting the good fight.  He shared that after his friends’ advice during last season’s reunion to cut ties with his golf buddy, Tammy, because of the way it made Simone feel, he’d done just that, and made a concerted effort to make her feel valued.  He said he knew that it may not work, but that, at least making the changes would  allow him to be confident that he’d done all he could.  He told Dr. G to do the same.

Dr. Eugene’s advice was a little different.  He recalled that, as a child, he’d witnessed his parents’ marriage slowly disintegrate before his eyes, and often wished they’d just cut their losses, and separate for everyone’s sake.  He was careful to say that he wasn’t suggesting that Dr. G and Quad call it quits, but cautioned him that when you really love someone, sometimes it’s best to let them go so they could move on, and be happy.

Dr. G said that he really did want to get his connection with Quad back, and Curtis advised him to “stay the course,” and keep trying to fight for his marriage.  After all, that’s what he’d done following his own infidelity, and he was happy to report that things between he and Dr. Jackie were getting better every day.

The men were a little more brutal in their honesty, as each sat down for their confessional interviews, with their wives by their sides.  Cecil said that there was simply no justification for finding yourself in a hotel room with another woman, a sentiment that Simone agreed with, wholeheartedly.

Eugene was just as pragmatic, and said that once a man found himself at the point where he was talking to other women, it was probably time to end your marriage.  But Dr. Damon was a little more understanding.  He said that during ‘biblical times,’ men often had 20 or 30 wives. Heavenly asked him if that sounded like something he might like, he assured her that it did not, and that he had “more than enough” on his plate just dealing with her.  I’ll say!

Curtis made a plea for everyone to be a little more sympathetic toward Greg, but Jackie wasn’t trying to hear that.  She said that Greg needed a lesson in getting “busted,”  and “owning up to it.” But she was also hopeful that he and Quad would somehow find a way to work past it.

She was just as hopeful when Quad paid her a visit at her home, and opened up to her about the pain and humiliation she’d been feeling since Greg dropped the bombshell of his night with the “other woman,”  a bombshell which only sent further shock waves through their lives when the woman began giving interviews to various outlets, describing the night in question as far more debaucherous than Greg had.

Dr. Jackie sympathized, and reminded Quad that she knew all too well how difficult dealing with such a public scandal could be.  She also suggested that Quad let her guard down a bit, and allow her friends to help her through it.  Quad said that she simply wasn’t used to “leaning on” others, but Jackie told her that allowing her friends to hold her hand through the tough times wasn’t really leaning on them, it was just what friends did for one another, and it had genuinely helped her when she’d allowed her friends to do the same for her.

Their conversation was soon interrupted by a phone call from Greg, which Quad ignored.  Dr. Jackie told her that it was actually a good sign that Greg was still calling her, and that the lines of communication between them were open.  But Quad shared that they were actually barely speaking, and that Greg was only calling because he was afraid.  She said he knew she was “about 10 minutes away” from divorcing him, and was now desperate to keep tabs on her.  When he continued to call, Quad finally answered her phone, and asked him what he wanted, and that’s when we found out something pretty important–Quad hadn’t slept at home the night before, and Greg wanted to ‘know where his wife had been!’

Quad told him that she had been working, and that she didn’t realize he’d be concerned. She abruptly ended the call, without so much as a goodbye, and began to cry, as she turned to Dr. Jackie and talked about how hurtful his behavior had been, and confided that she was probably about to “shake up” their lives for good.

Across town, Heavenly was talking to Dr. Damon about her plans to take a trip back home to Miami, per her anger management therapist’s advice.  She explained that he felt that much of her anger stemmed from her unresolved issues with her mother, and her sister, whom she’d said was a lot like Mariah.  He felt that a visit home to confront her painful memories might help her to let them go for good.  Damon agreed that it was a good idea, and also agreed that it would be beneficial for Simone and Jackie, her closest friends, to join her.

When the ladies headed off to the sunshine state, Simone and Jackie were eager to help their friend, but knew they’d have their work cut out for them.  Heavenly was happy to have them along, as well, and felt that she could more easily “get in her zone” with them by her side.  She said she knew that she could be a bit “harsh” at times, but explained that she’s dedicated to making changes, and is making progress.

Dr, Jackie wasn’t so sure, and within moment of landing in Miami, admonished Heavenly for her use of the word “b***h” when talking to and about her friends.  Heavenly explained that she didn’t really mean that word the way it sounded, and that actually it was usually a term of endearment.  Jackie was a bit dubious.  We’ve all seen Heavenly’s alter ego, whom she calls “L’il Kim,” rear her ugly head, and Jackie is well aware that when Heavenly flies into a rage, it’s a defense mechanism she uses to mask her insecurity.  All the same, she explained to Heavenly that using words like ‘b***h” rubbed people the wrong way, and that her constant need for retaliation against the smallest slights was off putting.

Heavenly explained that “b***h” wasn’t all that bad, and that, in fact, her mother used the word quite a bit growing up–even toward Heavenly and her sister–and that she’d picked up the habit from her.  And it was becoming clear in that moment, that Heavenly wasn’t appreciating Jackie’s words of wisdom, and said that sometimes she wished that Jackie would come right out and use the word, herself, instead of the condescending, rather self righteous tone she often put on.

Jackie knew this method of deflection all too well, and pointed it out to Heavenly right away.  Simone agreed, and said it was going to be a “long trip” if Heavenly continued to be so combative when they were only trying to help.  She and Jackie extracted a promise from Heavenly to try to hear what they were saying, and take it in the spirit in which they intended.  She, in turn, asked them to be understanding, and help her back up when she “faltered.” The ladies linked pinkies and made the pact.

Back at home, Contessa was dealing with her family history, as well.  Her mother had passed away from breast cancer when she was young, and her father had been newly diagnosed with prostate cancer.  It seemed the illness she feared the most was bearing down on her, and she was sure it was only a matter of time before she became sick, herself.  In an effort to continue to be healthy, she decided to undergo a prophylactic double mastectomy to remove her breasts before the cancer she was sure was inevitable had a chance to take hold.

She and Scott visited a doctor, who explained that the procedure was invasive, but quite simple, and assured her that she would be fine.  After some initial tests were in, the doctor called with the results, and let her know that the surgery could be scheduled within the next 24 hours, and Contessa said she felt there was no need to wait, and told her to book it.

The show faded to black from there, but the drama continues next week, as Quad faces the end of her marriage, Heavenly faces some painful memories back home, and Contessa faces the reality of being on the other side of the operating table…stay tuned!