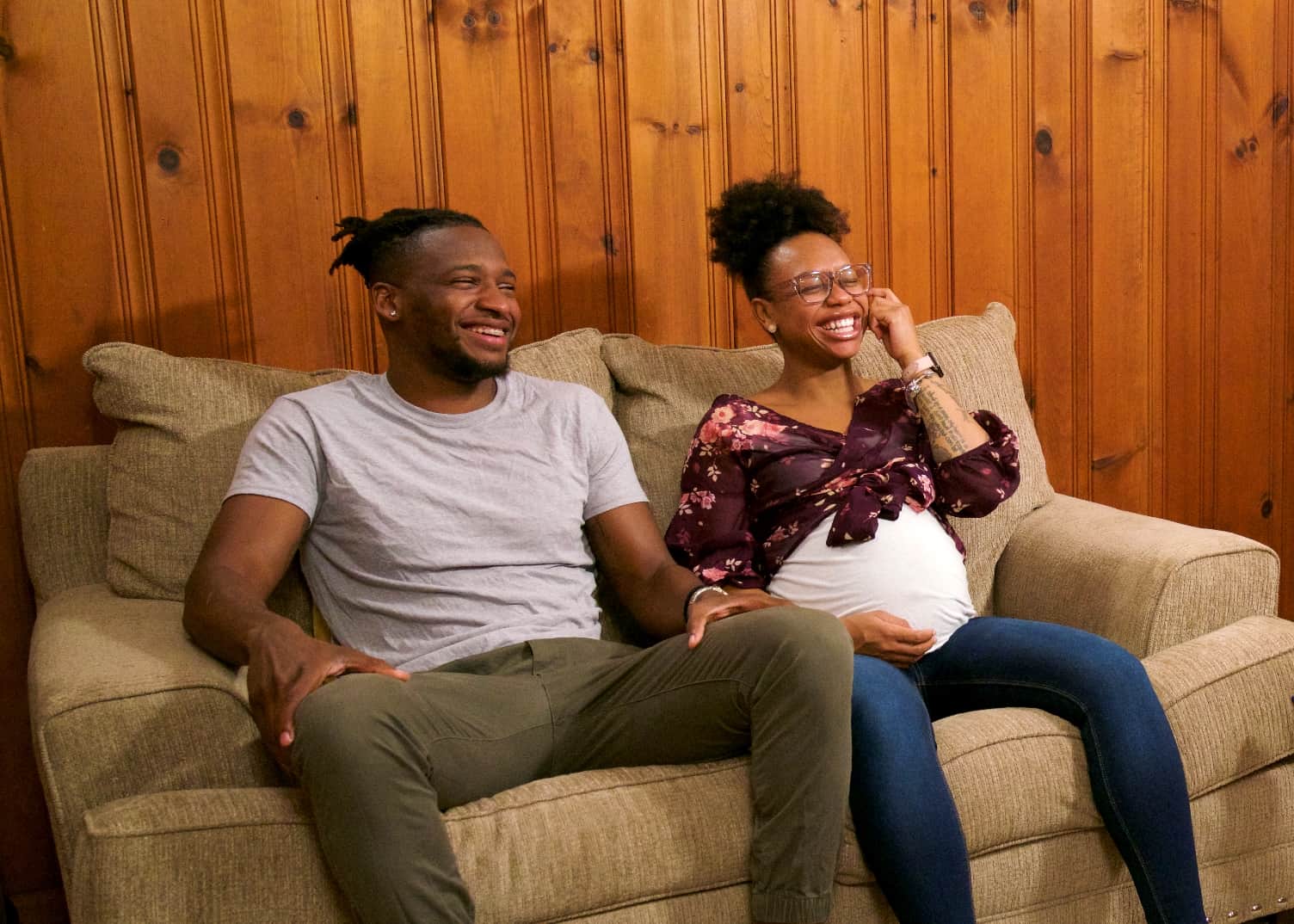 So, what can we expect from these two lovebirds? In this interview, nothing is off limits as we delve into their experience as new parents, what fans can expect from the spin-off, their marriage struggles, and if they have any advice for future MAFS participants!

Shawniece, 30, and Jephte, 27, welcomed their first child, daughter Laura Denise, together on August 20, and like most new mothers, Shawniece confesses “it was really hard adjusting to motherhood at first, but overtime it’s gotten easier.”

Jephte describes the journey of becoming a parent as “amazing,” while also singing the praises of his wife when it comes to the hard work she puts into being a new mom.

“Being a parent so far has been amazing. It’s extremely hard as a father, I can’t even compare to the work Shawniece does as a mother or just the work women do period when it comes to parenting at this early stage, especially when the child is being breastfed,” says the new dad.

When it comes to the couple’s decision to appear on this spin-off, after tying the knot on MAFS season 6, Jephte shares it was no easy decision as he and Shawniece did go back and forth for a number of reasons. Ultimately, they realized the show could be beneficial to the both of them, admitting they have had some struggles in their marriage.

“As a brand-new couple with so many newly added commitments, we’ve struggled in our new marriage, so we saw this as a chance to get more help and give us more tools to succeed,” revealed Jephte. “I think the viewers should expect a lot of growth in our relationships, and maybe if someone is facing similar issues than the advice we get could be translated to them.”

What Shawniece loves about the new show is getting to interact with other couples while also learning from them, as all three couples on the show are either going through pregnancy or parenthood. They will be joined by fellow MAFS couples – Danielle Bergman and Bobby Dodd plus Ashley Petta and Anthony D’Amico.

Although the couple are fan favorites now, Jephte admits he didn’t exactly feel the love when the show first began airing.

“Although you say we’re both fan favorites, I didn’t really feel like one especially in the beginning of the show. But they loved my wife! It was tough getting all that hate and negative energy early on but I was able to pull through,” said Jephte.

On the topic of public feedback, we asked the couple how their lives have changed since appearing on MAFS.

For Shawniece, not much has changed as she still feels like an “average joe,” however she has learnt to be more cautious in dealing with overzealous fans. “For instance, a fan came to our house, and a fan walked up to me and rubbed my belly. I thought nothing of it because I’m just all around friendly, but you never know,” she explained. “However, I’m thankful and truly blessed. I always tell my FrANs (fans that are friends) that I love them. You gotta say it like this: “ I Love All my Fr-ANNE-s.”

Shawniece and Jephte have arguably been one of the more successful couples on MAFS. Despite struggling at first, with the help of the experts and hard work, they have done well for themselves.  So what advice do they have for people thinking about on going on Married at First Sight?

Jephte advises, “If you’re 100% sure I’d say go for it. But if you’re flippy floppy I’d advise you to relax. This trip is a whirlwind. The advice I would give to the ones who get on is to hold on. It’ll be tough real tough but nothing great in life comes easy.”

While the new parents have been getting a ton of positive feedback lately, they do acknowledge there is also a downside to doing a reality TV show.

“The good part is I get to share my story with the world,” explained Shawniece. “The down side is sharing my story with the world – they forget that it’s a fresh relationship.  The word “marriage” puts the idea in everyone’s head (including mine) that it should be like based on tradition – but there’s nothing traditional about marrying a stranger.”

Now that the show is over, one can only wonder if they still have access to the experts. Both Shawniece and Jepthe say the experts will always be their support system, adding that Dr. Jessica, who lives near Boston, is always there whenever they need support in their relationship.

To keep up with Shawniece and Jephte, you can watch them on the new spin-off. Married At First Sight: Happily Ever After (produced by Kinetic Content) premieres Tuesday Oct 30th at 10/9c on Lifetime.