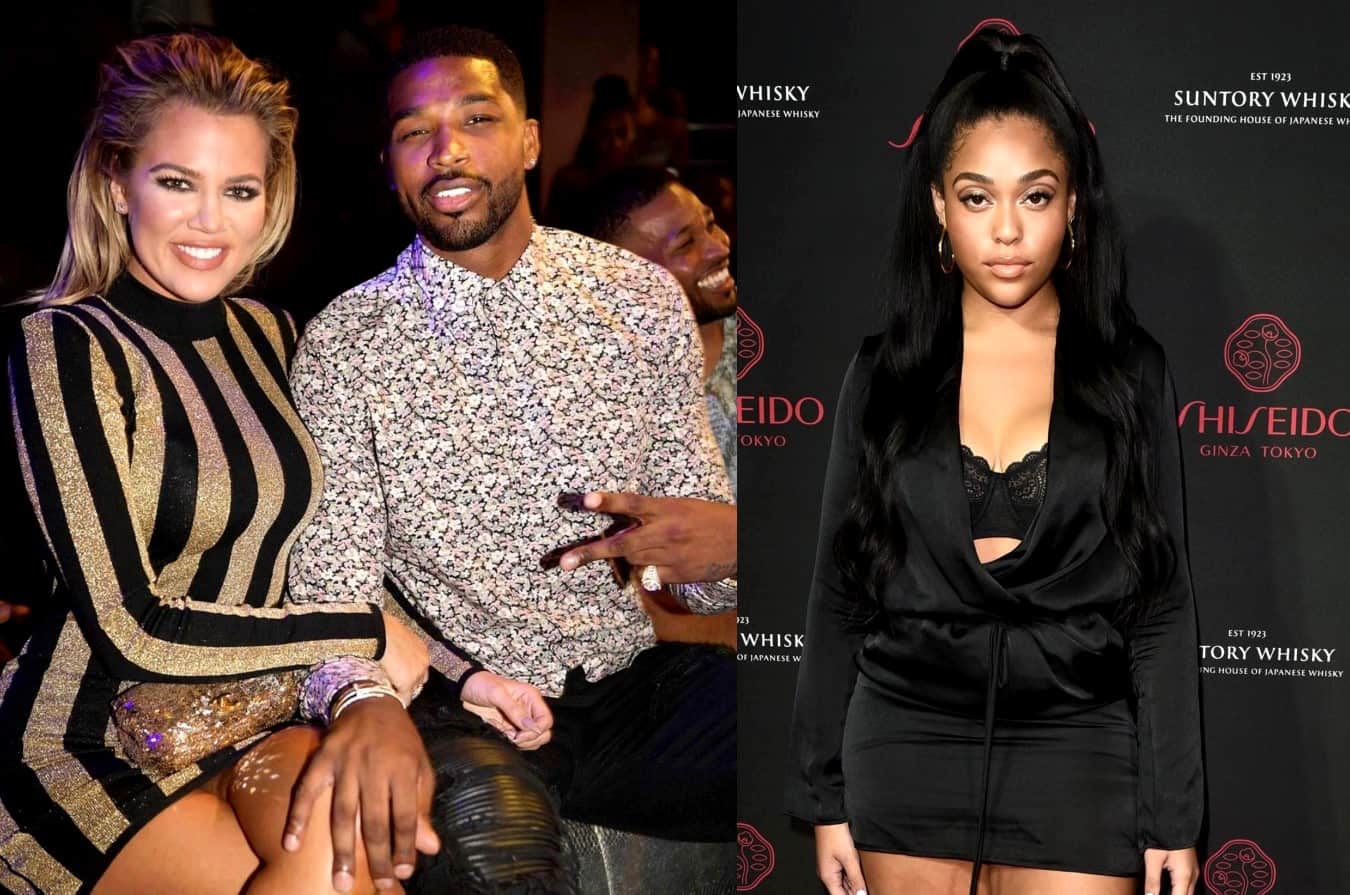 On Friday, March 1, after an interview went live on Facebook between Jordyn and host Jada Pinkett-Smith, Khloe lashed out at Jordyn, the former best friend of her youngest sister, Kylie Jenner, by accusing her of lying about the time she spent with Tristan Thompson and of breaking up her family.

“Why are you lying [Jordyn Woods]?? If you’re going to try and save yourself by going public, INSTEAD OF CALLING ME PRIVATELY TO APOLOGIZE FIRST, at least be HONEST about your story. BTW, You ARE the reason my family broke up!” Khloe wrote in her first tweet. 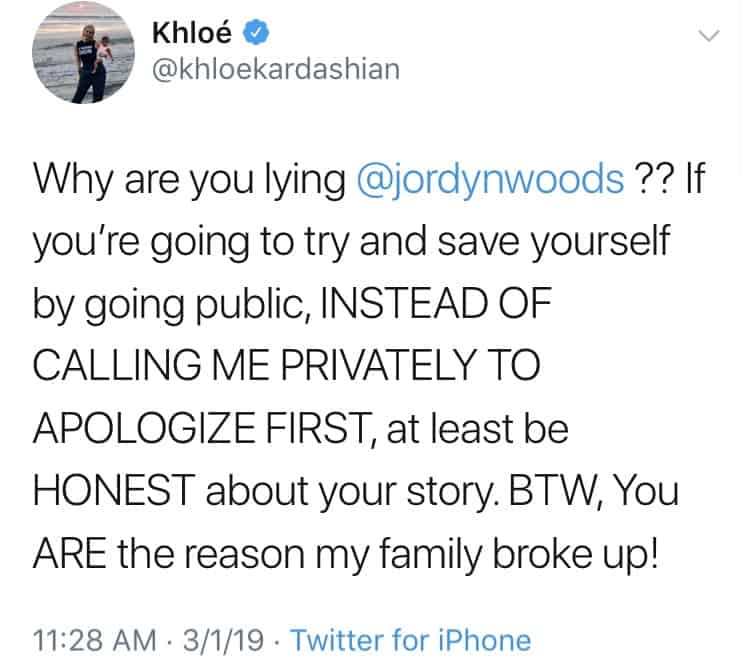 In a second tweet, she continued, “Tristan is equally to blame but Tristan is the father of my child. Regardless of what he does to me I won’t do that to my daughter. He has been addressing this situation PRIVATELY. If Tristan were to lie publicly about what conspired, then yes I would address him publicly as well.” 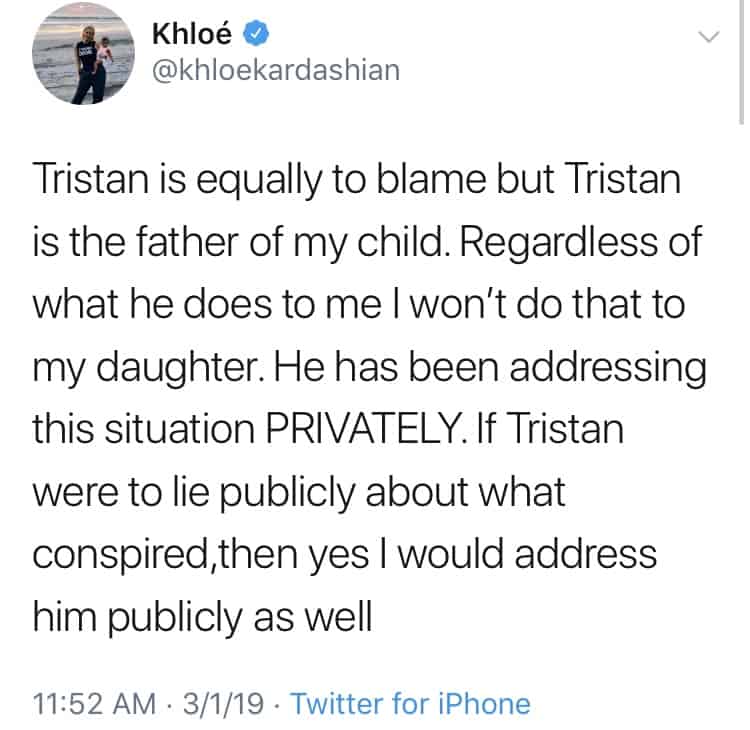 During her interview with family friend Jada, Jordyn revealed her account of what went down between her and Tristan last month during a late-night visit to his Los Angeles home.

“Sunday night, I went to dinner with some friends and I went to this bar after. There was a party going on. I was minding my business, dancing, drinking. Tristan was there. He was doing his own thing. After the club, the group of girls that I’m with are like, ‘We’re going to a house.’ On the way out, they’re saying, ‘It’s Tristan’s house.’ I’m like, ‘Cool. That’s okay. Feels like a safe environment.’ I’d rather it be his house than a random stranger,” Jordyn recalled.

While there have been reports claiming Jordyn and Tristan made everyone turn over their phone before entering his home, she said she did no such thing because she didn’t have anything to hide. That said, in retrospect, she now realizes she should have never stepped foot into the home.

“That’s my first step where I went wrong,” she admitted. “I should have gone home after the party. I shouldn’t even have been there. I wasn’t thinking right. I take full responsibility for that.”

Although Jordyn wishes she never accompanied her friends to Tristan’s after party, she denied “giving him a lap dance, making out with him, sitting all over him.”

“Never once did we leave the public area, go to a bedroom, go to a bathroom. We are all in plain sight,” she insisted. She did however admit that while Tristan was seated in a chair at the party, she was sitting on the arm of his chair with her legs “laying right over his.”

Throughout their night together, Jordyn said she and Tristan were never alone and enjoyed “an innocent time” with one another. The next morning, as she began to leave, the basketball star leaned down and kissed her.

“He just kissed me. It was a kiss on the lips but no tongue, no making out,” she shared, “and I don’t think he’s wrong either because I allowed myself to be in that position and when alcohol is involved, people make dumb moves or people get caught up in the moment.”

Drinking may have been involved but Jordyn said she never blacked out.

“I never was belligerently drunk to the point where I couldn’t remember what happened. I was drunk,” she explained. “I was not tipsy, I was drunk but I was not beyond the point of recollection. I knew where I was.”

According to Jordyn, she believes Tristan kissed her because he felt there was a chance they would hook up, and likely thought, “Let me just shoot my shot.”

The next day, Jordyn and Khloe came face to face and she assured Khloe that Tristan did nothing wrong at the party in an attempt to “protect Khloe’s heart.”

“It’s not fair that she has to deal with this and the last thing I wanted to do was be that person. I’m no home-wrecker. I would never try to hurt someone’s home, especially someone that I love and someone who has a beautiful daughter,” Jordyn continued.

While Jordyn admitted to hurting a lot of people by failing to provide an honest account of the events that took place between her and Tristan immediately after they occurred, she told Jada she is not the reason Tristan and Khloe are no longer together.

Jordyn went on to confirm she “never” slept with Tristan and offered to take a lie detector test to prove it.

Keeping Up With the Kardashians returns to E! on March 31 at 9 p.m.