The Real Housewives of Atlanta Reunion Part 1 Recap: Porsha Calls Out Nene For Not Being Supportive 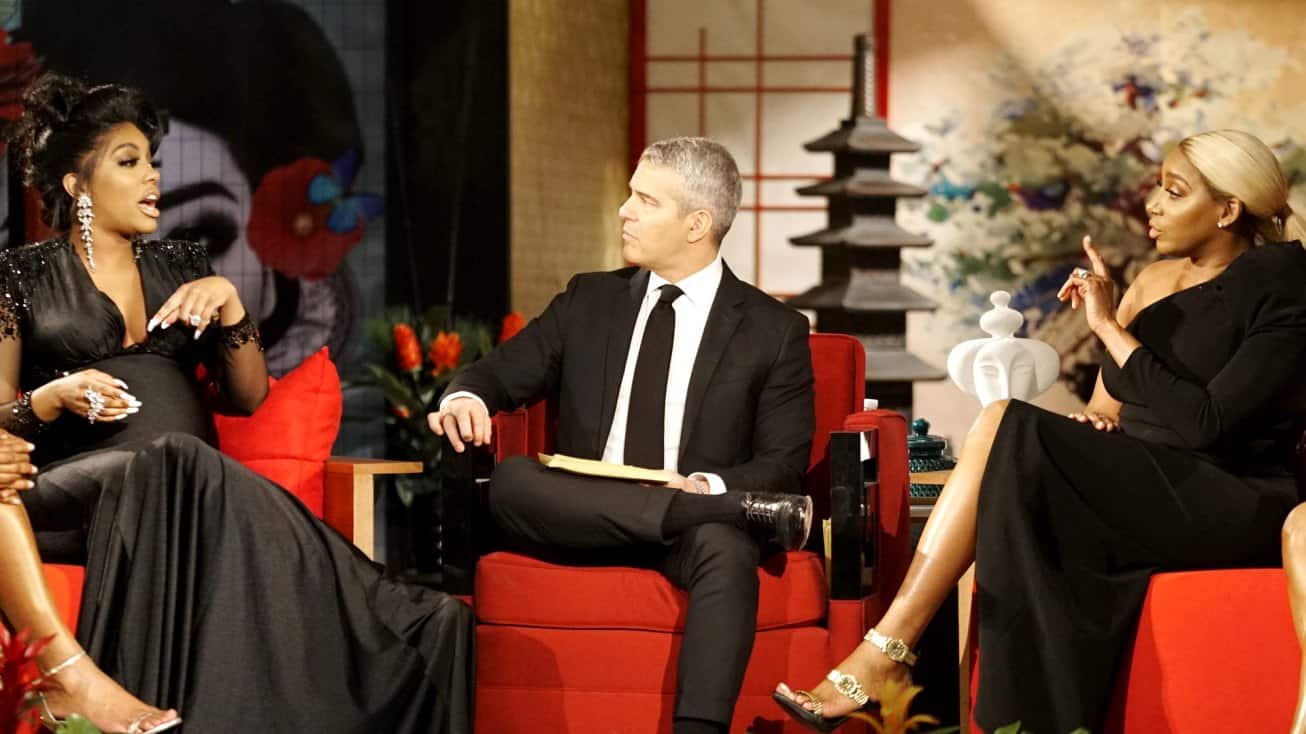 The first installment of The Real Housewives of Atlanta season 11 reunion aired last night, and there was pretty much just one takeaway from the hour–NeNe has got to go.  Seriously, I get that she’s the OG of the RHOA but if season 12 includes NeNe, I don’t think I can watch it. She’s always been a bit much, but this season she took things to a whole other level, and in her bid to be the center of attention, she made herself look like an overgrown toddler, and last night’s pouting, eye rolling, and shade throwing did nothing to redeem her.

From the moment NeNe arrived at the reunion venue, she was all attitude.  She remained convinced that the others were out to get her, which is ridiculous, considering it all seemed to stem from the fact that Kenya attended Cynthia’s party last week.  Extreme overreaction to petty nonsense? Absolutely. Paranoia? Definitely. Delusions of grandeur? Hell yeah. I’m starting to think NeNe missed her calling. Perhaps she should run for president.

While talking to Andy ahead of NeNe’s arrival, Kandi insisted that Cynthia genuinely had no idea that Kenya would be attending her party.  Cynthia also said that she never thought Kenya would show up, and tearfully explained that she never intended to hurt NeNe, or cause any trouble for her by inviting her friend to her event.  The only thing more annoying than NeNe’s mood swings is the other women’s need to walk on eggshells to avoid her wrath.

After Andy greeted all of the ladies, he asked Porsha, who was ready to pop at any moment, about her baby shower.  She said that she’d had a ball, but had missed Kandi and NeNe, neither of whom had shown up.  Andy pointed out that NeNe had been at Floyd Mayweather’s party instead, but NeNe insisted that she’d been in Canada working on a television show.

In researching the dates, Floyd’s party took place on February 23, while Porsha had her baby shower on Sunday, February 24. Perhaps it’s possible NeNe attended Floyd’s party and then flew to Canada the very next day.

Porsha mentioned that Kandi had more than made up for being absent by sending several lavish gifts, but when Andy asked about NeNe’s gifts, Porsha said she hadn’t received any, unless she’d missed them. NeNe assured her that she hadn’t missed anything because she hadn’t sent anything.  Sheesh! Just attitude everywhere–and why?! What did Porsha do? Was NeNe still angry at her for going in her closet? Was she already angry at Porsha’s baby, and throwing prenatal shade?! With NeNe it’s anybody’s guess.

Andy also asked if NeNe had been checking in on Porsha, since the two are practically neighbors, and NeNe simply said, “no,” she hadn’t been.  Guessing that NeNe’s lack of interest in her unborn child was due to her past comments about Porsha not attending her events, Porsha pointed out that she’d been to plenty of NeNe’s events, including traveling a great distance to see her perform her standup act last year. Even when faced with the evidence, NeNe insisted that Porsha didn’t show up to her events..period. When Andy suggested that Porsha’s feelings might have been hurt after NeNe failed to show up at both her gender reveal and her baby shower, NeNe said she didn’t care.  Good grief!

Andy wisely moved on to Eva, who finally owned up to her shade, after a season of claiming to be shade-free.  Well, “owned up” might be a bit generous. What she actually said was that maybe her definition of shade was different than that of the other ladies. When asked if Eva’s shade had hurt any of the ladies’ feelings, they all said they’d taken it in stride–except NeNe, who said she had a problem with the fact that Eva had said, during a recent confessional interview” that it ‘wasn’t all about NeNe.’ So, I take it that NeNe feels that it is all about her?! Her words and actions seem to suggest that she does. Eva asked if her comment had anything to do with NeNe’s “aggressive” energy, but NeNe said it was every woman for herself at the reunion. Eva pointed out that everyone had been friendly toward one another, and had enjoyed polite banter–except for NeNe. Eva also explained that she’d only said what she’d said because NeNe had seemed so disinterested during  her bachelorette festivities in Tokyo, to which NeNe responded, dripping with sarcasm “oh, I’m so sorry.”

But NeNe wasn’t the only one who took issue with one of Eva’s shady comments. Kandi had accused Eva of being color-ist when Eva had thrown shade at Shamea, saying she was definitely black, but not “black with a q,” a reference to Shamari’s singing group, Blaque. Eva explained that she was definitely throwing shade at Shamea, but because she didn’t belong to a singing group, not because of her color.  The justification made no sense, whatsoever, and although Kandi said she accepted Eva’s explanation, it was clear she wasn’t convinced. For the record, neither am I.

Kandi moved on to share some very exciting news: she and her husband, Todd planned on transferring their embryos a week after the reunion! She got teary-eyed as she spoke about how using a surrogate to bring her daughters into the world often made her feel like less than a mother, but Andy, who recently welcomed a beautiful baby boy via surrogate, assured her that she would be every bit as much a mother to them as she’d been to the children she’d carried in her own body.

Later, the ladies talked about social media, particularly NeNe’s post about a “close friend,” whom she’d described as “insecure,” not that nice,” not that pretty,”  and “not that talented.”  Her post had gone on to accuse the mystery person of “setting her up for the kill.”   She refused to reveal the identity of the person, and said it was for her to know, and for everyone else to guess.  Naturally, some thought it was Cynthia, but Cynthia said once she’d read the words “insecure,” and “not that pretty,”  she’d been pretty sure NeNe hadn’t been referring to her. NeNe said that the phrase “close friend” should have been the tip-off.

They moved on quickly, as it was clear that NeNe wasn’t going to fess up now that she was face to face with her so-called friends. But another of NeNe’s social media posts came up.  This one was about her husband Gregg being “mean” during his illness, and whether, or not, that was normal.  All of the ladies agreed that such a post had been unnecessary, and that NeNe should have kept their feelings about Gregg’s attitude to herself.  NeNe told the ladies that she “didn’t give a ___” what they thought, and that she would continue to post whatever she liked, whenever she like, however she liked to her social media pages.

So NeNe wasn’t interested in the opinions of her castmates–nothing new about that, but that stance didn’t stop her from commenting on Cynthia’s social media posts, calling the pictures she posted of herself and her boyfriend, Mike Hill, insecure, and accusing her of “trying too hard.” Trying too hard to do what, I wonder? She called their couple name, #Chill “overkill,” and when Cynthia asked why it bothered her so much, NeNe said it was her opinion, and she didn’t care what Cynthia thought of it.

Seems NeNe doesn’t care about much these days, and here’s hoping that time spent “filming in Canada” means she has another job–but not quite yet.  It will continue to be “all about NeNe” next week as she finds herself in the hot seat once again for the second installment of the reunion special. Stay tuned!

TELL US – WHAT ARE YOUR THOUGHTS ON THE RHOA REUNION PART 1?