Real Housewives of Atlanta Reunion Part 2 Recap: Nene Hints at a Possible Divorce to Gregg Amid His Cancer Battle 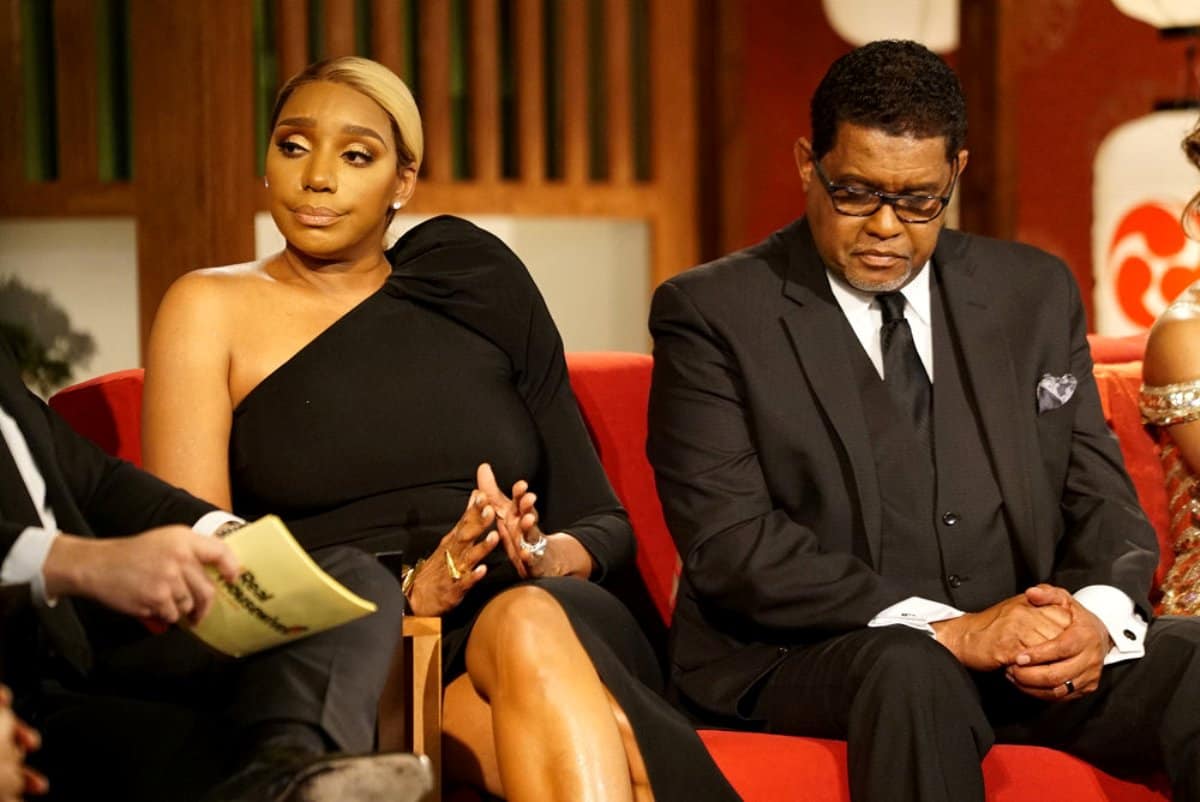 Wow–season 11 of The Real Housewives of Atlanta was a long one, but watching them rehash it all, while dressed like pageant rejects is just exhausting.  These women are certifiable, and their queen has really lost it. NeNe has been drinking her old Kool-aid for 11 years now, and all I have to say is—go home, girl, you’re drunk!

To Andy‘s credit, he actually managed to talk about something other than NeNe for about the first 10 minutes of the show, but it really just amounted to beating a different dead horse–i.e. Kandi vs. Porsha.  The two women discussed the end of the cease fire they reached last season.  It was caused by two things, neither of which was very interesting.  First of all, Kandi talked major trash about Porsha‘s soon to be baby daddy, Dennis.

Who cares, am I right? The man was a complete dog, apparently, and Kandi knew it.  She had friends that dated him, namely Jamie, a woman Porsha had beef with a few seasons back and chased out of a party and down an alleyway.  We all remember that.  How could we not? It was a pivotal moment that made us all wonder what Porsha might do next, and as such cemented her role on the show.

Anyway, Jamie is a good friend of Kandi’s, and had told her all sorts of things about the type of guy Dennis really is.  Now, Kandi should have seen that this woman might have a good reason to see Porsha hurt or humiliated, and taken it all with a grain of salt, but since Porsha and Kandi have been on the outs ever since Porsha accused her of planning to drug and rape her, Kandi has been uncharacteristically petty and nasty about her.  Not that I blame her.

Things really came to a head between the two in a moment we didn’t even get to see: Porsha getting kicked out of the birthday party Kandi threw for her husband, Todd.  According to some partygoers, Porsha confronted Jamie, and became aggressive, and caused a scene, before one of Kandi’s staff members told her she didn’t have to go home, but she had to get the hell out of there.  But as dramatic as it all sounds, it really must have been nothing because Kandi swore up and down that she never even knew anything about Porsha getting thrown out of the party, and even admitted that she didn’t honestly think that Porsha was getting into Jasmine’s face.  In fact, Kandi and Porsha are on pretty decent terms these days, and only seem to disagree on one thing about that night.  Was Porsha drunk or not?

Well, it really wouldn’t matter except that Porsha was pregnant at the time. She said she definitely wasn’t drinking, but Kenya brought receipts, and showed a picture of Porsha twerking with what appeared to be a glass of wine in her hand.  Porsha said “it might have been a mocktail.”

But of course, even this Porsha/Kenya saga somehow came back around to NeNe.  She was angry because, during a confessional, Porsha had said that NeNe told her that Kandi hadn’t shared the things she knew about Dennis’ womanizing because she wasn’t sure how Porsha would react.  This led to NeNe making a nasty post about Porsha on her Instagram page (what are they 12?!).

But as far as Dennis’ many other women are concerned, Porsha said she doesn’t mind that some of their names are tattooed on his body because she ‘still licks them the same,’ and “they’re delicious.” It was at this moment that I threw up in my mouth just a little, but luckily the subject changed pretty quickly.

NeNe talked a bit about Gregg, and how his cancer diagnosis may have exacerbated their issues, but it certainly hadn’t caused them.  It seems their marriage had already been on the rocks before he got sick, and it hasn’t gotten better as he’d gone down the road to recovery.  She said his colostomy bag had forced them to sleep in separate rooms, but that they’d remained apart despite the fact that he’d had surgery to repair his colon.

Gregg joined her on the couch, and said he’s feeling “pretty good” these days, and shared that he’s a couple of treatments away from starting radiation, and would soon be undergoing a battery of tests to determine if the cancer had spread.  He also added that he should have listened to NeNe years ago when she’d encouraged him to get a colonoscopy, and urged viewers to do it, regardless of how unpleasant the experience may be.

As far as their relationship, and NeNe’s claims that he’s been a grouch while being sick, Gregg admitted that he’s “not the poster child for kindness.” NeNe said that her husband often wished that she wouldn’t have shared that fact about him, but said there’s “a lot” she doesn’t share.  She had also been upfront about his cheating several years back–of course, she couldn’t really help that.  They’d gotten divorced, after all, and viewers would have wondered where Gregg was.  Gregg says now that his infidelity is water under the bridge, and that he let it go a long time ago, but could NeNe still be harboring the hard feelings after all these years, Andy wanted to know? “Maybe” was her reply.

When asked about her travel schedule during her husband’s convalescence, NeNe said she really had no choice because she’s “the provider,”  and had she stayed home, Gregg “wouldn’t have eaten while he was sick.”  She added that she would always tell it like it is, and react in the way that comes naturally.  She said that the bottom line was that sick or not, Gregg was “no walk in the park.”

They both admitted that the marriage may be over, but said that no matter what, they were still family. But while Gregg said he wanted it to work, NeNe said she felt she had been “backed up against the wall, and was coming out saying no.”  Despite those ominous words, NeNe kissed him, and could be heard telling him he did a good job, as the camera panned away, and the show took a commercial break.

After Gregg left, Marlo and Tanya joined the ladies, and talk turned to the girls’ trips they’d taken this season to Destin, Fla, and Tokyo.  Fans wanted to know why Tanya’s title had gone from “NeNe’s friend” to “Eva’s friend.” Tanya said she wasn’t sure, but NeNe said the title change was accurate.  Tanya was still stung that NeNe had implied that she may marry someone other than her fiance, Paul, while they were in Tokyo.  Cynthia, who, has a nearly Pavlovian response to anyone calling NeNe out on her crap, quickly jumped to her defense, and said she really didn’t think she’d been being shady with her comment (what?!).

NeNe then offered Tanya an insincere apology, dripping in sarcasm, and when Tanya said that she “moved up” in the group, and started making friends with the other women, NeNe had stopped talking to her.  But NeNe denied doing any such thing, and said that she had no issue with Tanya, and warned to not to try to start one.

Porsha, and even Cynthia, had to agree with Tanya on that last point–if you step out of line with NeNe, you’re dead to her, and Tanya had definitely stepped out of line during the trip to Destin.  The ladies had had a little talent show, and when Tanya stepped out to show off her style, she’d said she was doing a high low with her designer duds paired with sunglasses form NeNe’s store, Swagg.

Cynthia said that NeNe had a tendency to cut people off, rather than talking about the fact that she may be feeling some kind of way about something they’d said or done.  Porsha said it was the consensus among the group that they were all indispensable to NeNe.  But NeNe was unmoved.  She said “who cares,”  and then said she wasn’t interested in being good friend with any of the ladies.  Then she made a truly Nasty comment to Tanya.  She said something about her “pu%%y” and the fact that she’d ‘never get a peach from  her.’

Eva accused NeNe of being passive aggressive, and NeNe whispered to Andy the women were “really working hard for their spots” on the show by “trying” her.  Eva asked Cynthia if she felt NeNe was passive aggressive also, adding that she ought to know because she and NeNe were friends.  Marlo, who’d been quietly egging NeNe on the whole time said, ‘oh, you and NeNe aren’t friends, Eva?” Eva said that she thought they were, but after watching the show back, she knew better.

This somehow shocked NeNe, who said she really couldn’t believe Eva was giving her attitude after the way she’d ‘had her back’ this season.’  Eva said she’d been the one who had NeNe’s back, and that things were only copacetic when she was willing to be NeNe’s “lapdog.”  Eva added that she hadn’t noticed all the shade NeNe had thrown during her bachelorette trip to Tokyo until she watched it, and NeNe said she must be a “real G” because everyone was talking about her.

Marlo sat quietly throwing shade at Eva the entire time, but got much louder when talk turned to Shamari, who Marlo said “needed help” for her “drinking problem” When Andy asked Marlo how Shamari’s drinking was any different than her own, particularly during the Tokyo trip during which she’d locked herself out of her room, laid down on the floor in the hallway, and shamelessly flirted with the staff, Marlo explained that it had been different because that had been a girls’ trip, and she hadn’t vomited and started hitting people on the “poom poom.” In the best line of the evening, Shamari told Marlo that she was sure if all it would take was a Chanel bag, a Marlo would let her touch her “poom poom.”

And speaking of touching “poom pooms” viewers wanted to know if Shamari’s “bi-sexual days were behind her,” and she said that they were.  She was definitely a better person these days than she’d been in the early days of her marriage, she said.

Shamari also said she felt her fashion choices had changed, and that she felt she’d really evolved her style during her time on the show.  And talk of fashion brought the conversation back to the “Bye Wig Party,” where NeNe explained away her behavior, which included ripping the shirt off of a cameraman, and physically attacking Kandi and Porsha, who had dared to go inside her closet, as a “natural breakdown.” She also said her friends hadn’t been there for her the way they should have been throughout Gregg’s illness, which they all disputed, particularly Porsha, who was near tears as she yelled at NeNe about how hurt she was that she had said they didn’t have a genuine friendship.

Andy asked NeNe if she had a response to Porsha pouring her heart out this way, but NeNe simply said no, and sat looking at Porsha as though she were the exhausting one.  It was a real trip, and this is far from over–the ladies will be back for the explosive, final installment of the reunion next week. Stay tuned!

TELL US – WHAT ARE YOUR THOUGHTS ON THE RHOA REUNION PART 2?