Home Featured Posts The Real Housewives of New York Recap: The Ladies are Over Luann… and Cabaret

The Real Housewives of New York Recap: The Ladies are Over Luann… and Cabaret

by Tiffany Brown May 23, 2019 54 comments
ShareTweetWhatsappPinterestRedditTumblrMailFlipboard 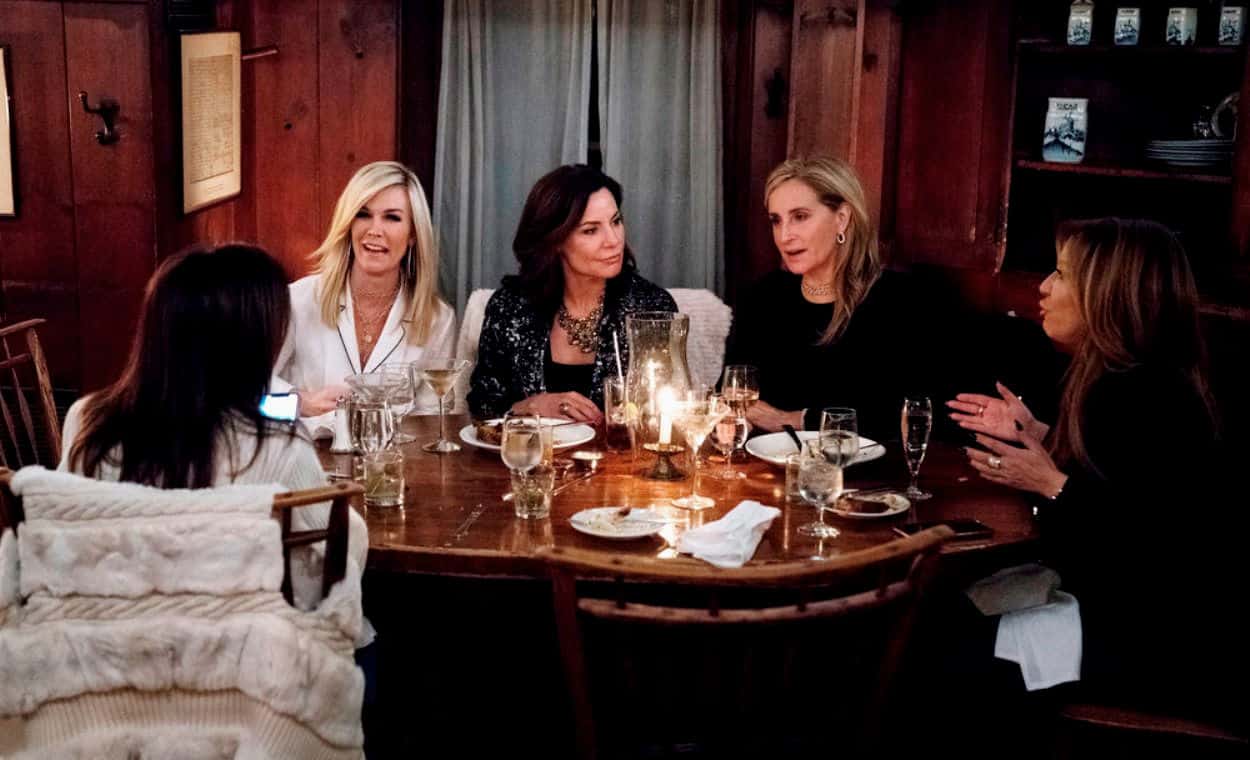 Last night wasn’t the most exciting or drama filled episode of The Real Housewives of New York we’ve ever seen, but it’s clear that they’re leading unto something–and I think it’s about to get pretty good!

When we picked up with the ladies, they were still at Luann’s new upstate home, and she and Bethenny were still mid-argument.  In case you missed it, Bethenny had confronted Luann about the things she’d been saying about her recently, namely her comments about Bethenny leaving her Halloween party early so that she could go home and be with her daughter.

You see, The Countess hadn’t been buying Bethenny’s excuse, and had quipped to the other ladies, “what’s she going to do, go home and watch her sleep.” All in all, not that shady of a comment, but Luann’s been full of such snark lately, and Bethenny had had enough.

Luann was trying to say that she was just upset because she’d really wanted Bethenny there to help her celebrate her triumphs, the same way she had been there for her at her most defeated.  Bethenny said she understood that, but she’d needed to leave, and Luann shouldn’t have anything to say on the subject, and if she had, the least she could have done was gone to Bethenny directly instead of trash talking her behind her back.

Luann agreed–but then in an effort to find even more justifications for her behavior, she jammed her foot right in her mouth.  She said she was upset because “nobody” had been there for her performance.  The problem was that literally ALL of the other women had stayed.  What were they, chopped liver?! Tinsley quite accurately pointed out that Luann was so self-involved, she didn’t even realize who was around her. Luann said she wasn’t even sure anymore who had been there, and thanked the other ladies for their support (is she sure she’s sober?!).

Bethenny then brought up the comments Luann had made during their annual trip to the Berkshires.  After realizing that Dorinda had saved the best room in the house for Bethenny, leaving her with the dreaded “fish room,” Luann came completely undone, and threatened to stay in a hotel, but not before calling Bethenny a “Queen Bee,” and asking Dorinda why Bethenny couldn’t just stay in a hotel.  Of course, Bethenny heard about the exchange pretty much the moment she arrived, and she’d largely avoided Luann since then, but now, she was on a roll.

Luann had plenty of justifications for that behavior too.  She began by saying once again that she’d been “upset”– I think this is Countess-speak for I can act like as much of an a**hole as I like, and it’s okay as long as I was unhappy at the time.  She explained again that she’d been worked up over the “fish room” because the last time she was in it, she’d been “wasted.” But Bethenny wasn’t allowing it.  She said that ‘no one gave a f***,’ adding that they all had their own lives, and their own things going on, and it didn’t make it okay for her to treat people the way that she did.

Then Luann tried to say that it was Dorinda she had been angry with, but Bethenny wouldn’t budge.  She said that whatever had been going on between her and Dorinda at the time had nothing to do with her.  She began to try to coax an apology out of Luann (it doesn’t come naturally), but rather than just swallowing her pride and saying she was sorry, Luann just stepped in it once again.  She actually said ‘Thanks for coming to the show, and I’m sorry you missed me, because I think you really would have enjoyed it.’  Wow! ‘Sorry, you missed me?! That’s worse than ‘sorry you feel that way.’  It was pretty amazing.

Bethenny accepted the apology–if that’s what you want to call it—and excused herself to take a phone call from her new boyfriend, Paul.  After a few minutes, Luann came looking for her.  She said that she wanted she and Bethenny to have a friendship that she could trust.  Huh?? Bethenny said she was the one who needed to be able to trust Luann, because as friends went, she had been “straight up 100.” She’s not wrong, and Luann acknowledged all that Bethenny has done for her over the last couple of years, but at the same time she said, during her confessional,  that Bethenny was using those things as a get out of jail free card, and she was “overplaying it.” What?! Get out of jail for what?! Far be it for me to defend Bethenny, but she did bend over backward to help Luann, and had gotten nothing in return but snarky comments, and she hadn’t even really made any snarky comments back!

Finally, Luann swallowed her pride and apologized for real (ish), although all the while she continued talking about how “upset” she’d been.  The ladies hugged it out, but Bethenny likened the “quick and dirty”  exchange to bingeing on fast food, saying she was left feeling neither full, nor satisfied.

They went on to discuss Bethenny’s love life, and while she acknowledged her new beau, and said their relationship was “evolving,” she was quick to add that she was still mourning Dennis.

Later, Bethenny, Dorinda, Tinsley, and Ramona took off to explore the town and have a few drinks before the others met them for dinner to celebrate Ramona and Bethenny’s birthdays.  The town Luann’s home is in is only a few miles away from where Ramona grew up, and walking into the restaurant, one she had often visited with her family, flooded her with memories–some good, some very, very bad.

Ramona talked about how she hadn’t been back to that town since her mother had died more than a decade ago, and spoke about the abuse they had all endured at the hands of her father.  Dorinda was stunned.  She’s heard Ramona mention her upbringing before, but it had always been brought up in an effort to justify some horrific Ramona behavior, so she’d always taken the stories with a grain of salt.

The ladies continued to listen as Ramona detailed how her father had further broken her heart by leaving her nothing in his will, despite the fact that they had reconciled in the years before he died.  She said he left everything to her sister and only brother, who had died a few years ago, after hitting a tree with his car.  It was a lot for one woman to have gone through, and you could see the others softening, as they listened.

Back at Luann’s Barbara came to find her hostess and make sure she was alright after the argument she’d had with Bethenny.  Luann said she was fine, but wondered at the fact that Barbara had remained silent the entire time Bethenny was confronting her.  Barbara said she had simply wanted to stay out of it, and, during her confessional,  said that she’d been Luann’s “soldier” far too many times.  She felt the exchange had been aggressive, and that, with the others chiming in at different points, it had felt like Luann was being ganged up on but, at the same time, she understood exactly where they were coming from.

Sonja agreed. When she came into the room, Luann accused her of “stirring the pot,” although all she’d really done is nod along the whole time, and make the same outraged and affronted grunts and groans as the other women when Luann said “nobody” had been there for her show.  Sonja wasn’t worried about how Luann felt about her in that moment, she said Luann needed to hear what the other women had to say because they’d all had their fill of her self involved attitude.

A little later, the ladies came back together for dinner, and Sonja made a half-hearted attempt at confronting Ramona over the fact that she hadn’t been invited to her birthday lunch the day before, but Ramona pretty much just blew her off.  The ladies continued to eat and snark lightly at each other until Ramona, Dorinda, and Bethenny announced that they wanted to stay where they were, rather than go along with Luann and the others to see a performance by Luann’s friend, Margarita, an 80 year old cabaret singer, who was performing in a dive bar nearby.

They said they didn’t want to hurt Luann’s feelings, but they simply weren’t in the mood, and wanted to relax.  Luann took it in stride. She really had no choice after acting like such a brat that afternoon, and the women knew they had her right where they wanted her. Only Tinsley, ever the people pleaser, decided to go along with Luann.

Ramona took Bethenny and Dorinda to another restaurant that brought up painful memories–her mother’s favorite, the one where Ramona had held the reception after her funeral.  As memories clearly flooded through her, Bethenny mentioned that she understood exactly where Ramona was coming from, as she described her own drunk father, who often brutalized her mother, who, in turn, was more interested in being her daughter’s friend than her mother, and had been out partying with her when she was only 14 years old!

Both women had horrific memories to share, and before long, they were both in tears, as they recalled some of the worst moments, but surely they were still having a better time than Tinsley, who was left pretending to enjoy herself, as she danced along with the locals, and wondered why good deeds never seem to go unpunished. Barbara, on the other hand, had a great time.  She caught the eye of the one straight guy in the place, and made a bit of a love connection. Although, she may have been more enamored of his luxurious, curly hair than the man himself, but in her defense, it was really good hair.

The next morning, the snarkiness continued between Ramona and Sonja, as Sonja made snide comments about the housewarming gift she brought for Luann.  Dorinda got in on the act, as well.  When she announced she was heading back to the city early, Ramona ‘gave her that face,’ and she went off, telling her to “back off,” despite the fact that Ramona hadn’t actually said anything (yes, I’m defending Ramona and yes, it feels wrong).

Within moments, Dorinda was rehashing Ramona’s recent transgressions: angrily telling Dorinda not to interrupt her while she was giving her speech at the charity luncheon she hosted last week, and  inviting Dorinda to be her plus one at another recent charity event, and then leaving her all alone to hang out at the “cool table.”  As Sonja clucked about, tossing in her own two cents on the matters here and there, they turned on her, and Sonja was accused, for the second time in less than 24 hours, of pot stirring.

Before long, Bethenny diffused the situation by doing a dead-on impression of how Dennis would have reacted to their carrying on, and they all laughed, and seemed to forget they were angry at all.

All in all, it was a fairly mundane episode, but just wait until next week.  The RHONY ladies are headed to Miami (apparently they’ll never learn) and things are about to get loco! Stay tuned…