Home Keeping Up With the Kardashians Fans Bash Khloe Kardashian and Sisters for Hypocrisy After KUWTK Episode Featuring Tristan and Jordyn Cheating Scandal, Plus Did Tristan Threaten to Hurt Himself?

Fans Bash Khloe Kardashian and Sisters for Hypocrisy After KUWTK Episode Featuring Tristan and Jordyn Cheating Scandal, Plus Did Tristan Threaten to Hurt Himself? 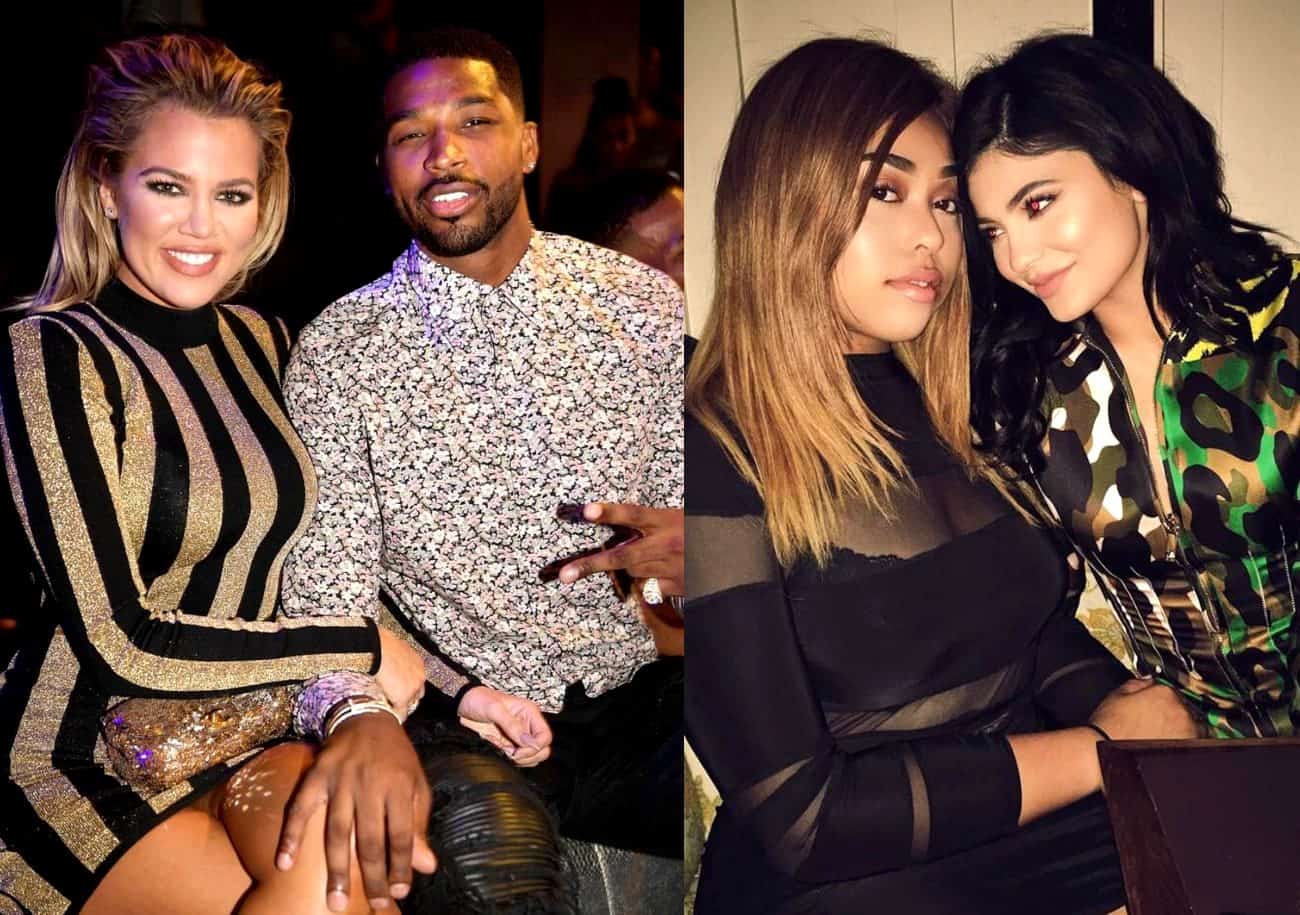 The first part of the highly promoted Keeping Up With The Kardashians episode featuring the cheating scandal between Tristan Thompson and Jordyn Woods finally aired last night. It’s safe to say Khloe Kardashian isn’t getting the feedback from fans that she was likely hoping for.

In February, news broke that Khloe and Tristan, the father of her one-year-old daughter True, had called it quits after Tristan allegedly cheated on Khloe with Kylie Jenner‘s best friend Jordyn.

Right after the scandal, Khloe did get some sympathy from the public. The tide quickly started to turn against her, though, after she accused Jordyn of breaking up her family. Many fans felt that wasn’t accurate since Tristan had already been caught cheating on her with multiple women before the Jordyn drama.

And in recent weeks, the hypocrisy cry from fans has only grown louder after Tristan’s ex-girlfriend, Jordan Craig, revealed in court documents that Tristan cheated on her with Khloe… while she was pregnant. Even worse, Jordan stated that this caused pregnancy complications.

The E! network posted a preview from the episode on their Instagram page on Sunday night that showed Khloe accusing Jordyn of ‘ruining her family.’ Many fans slammed Khloe and her sisters, who also have a questionable history of dating the men of their friends and associates.

“Oh please stop! They’re all sitting there on their high horses, like they aren’t guilty of doing the exact same thing Jordyn did,” wrote one fan. “You all had smiles on your faces, and didn’t think of Jordan Craig, Blac Chyna, Amber Rose, Justine Skye and Trina, when you were stealing their men. Just stop with the hypocrisy.  Your self entitlement to get away with bad behaviour is nauseating.”

Indeed, Blac Chyna recently accused Kylie of starting a relationship with rapper Tyga while she was still with him. Amber Rose also claimed years ago that Kim Kardashian would send her then-boyfriend Kanye West inappropriate pics and messages while she was with him.

“How you get him is how you’ll lose him. ????????‍♀️,” wrote another commenter, referencing Khloe starting a relationship with Tristan while his ex was pregnant.

“Wasn’t a family ruined before TT hooked up with her?? Seems he’s not really a family man…not rocket science even for a Kardashian…????????,” one more person wrote.

“No Tristan’s ruined your family,” added someone else.

“I mean she did it to his first baby mama so karma is a biatch,” a fifth person stated.

“You didn’t have him when you lost him. You were already broken up and living separately,” claimed another viewer. 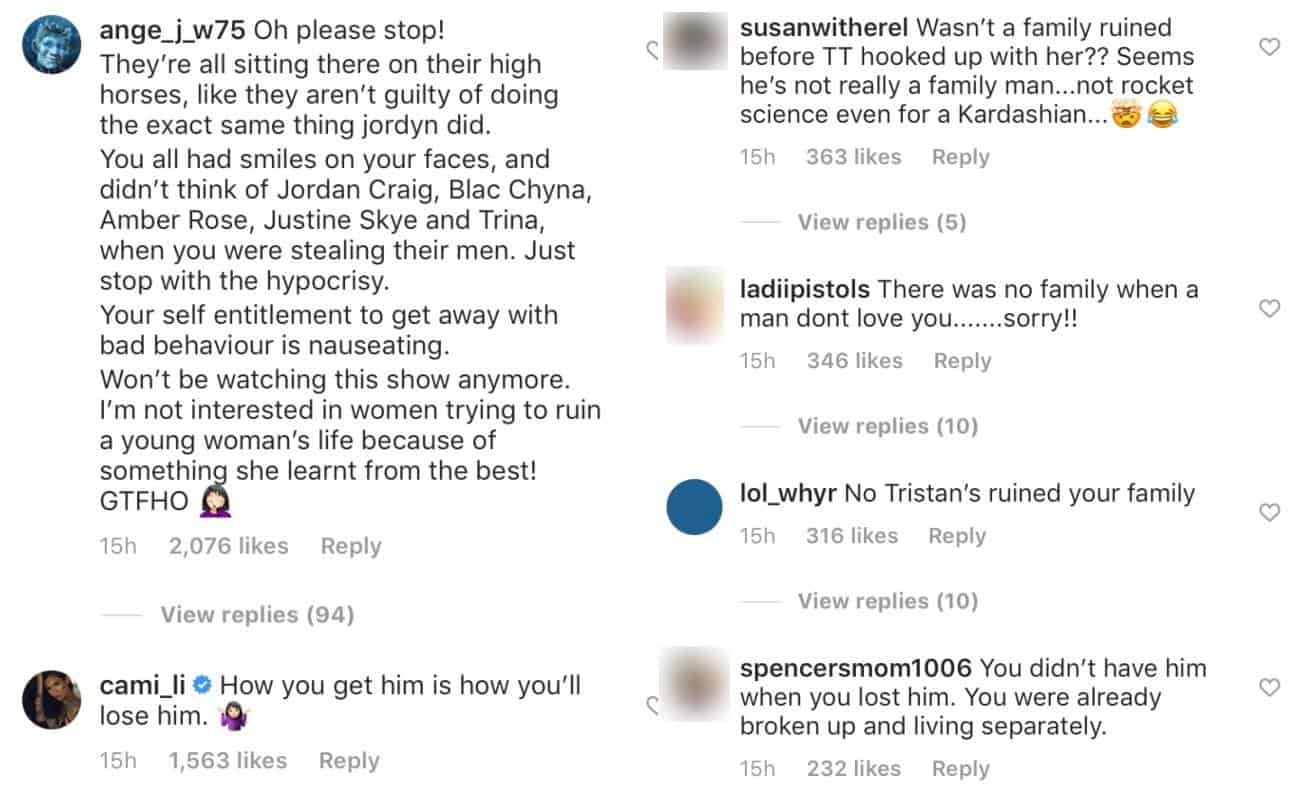 As for the actual episode, there were some new revelations as Khloe alleged that Tristan threatened suicide after the story broke earlier this year.

“He’s like, ‘I can’t stop thinking about you and what mess I have caused,’” Khloe claimed during a conversation with Scott Disick. “He’s doing this to get a reaction out of me. Oh, so I’m just allowed to say ‘I’m going to kill myself’ at any time? That’s crazy.”

Later on, Khloe revealed she had asked one of Tristan’s friends in Cleveland to go check on him after the alleged suicide threat.

“So I get to the house and the door is locked. I banged on the door and said, ‘Why is Khloe saying you are trying to kill yourself?’ He was like, ‘I’m good,’” Tristan’s friend Savas told Khloe on the phone.

Amid the scandal, Jordyn did an interview with Jada Pinkett-Smith for her Red Table Talk show. She insisted that she never went all the way with Tristan, adding that the only thing that took place was Tristan pecking her on the lips.