Home Real Housewives of Beverly Hills News RHOBH’s Brandi Glanville Leaks Tamra Judge’s Private Messages Amid Their Feud, Plus She Slams the RHOC Star as a “Coward” as Andy Cohen Weighs In, See the Messages

RHOBH’s Brandi Glanville Leaks Tamra Judge’s Private Messages Amid Their Feud, Plus She Slams the RHOC Star as a “Coward” as Andy Cohen Weighs In, See the Messages 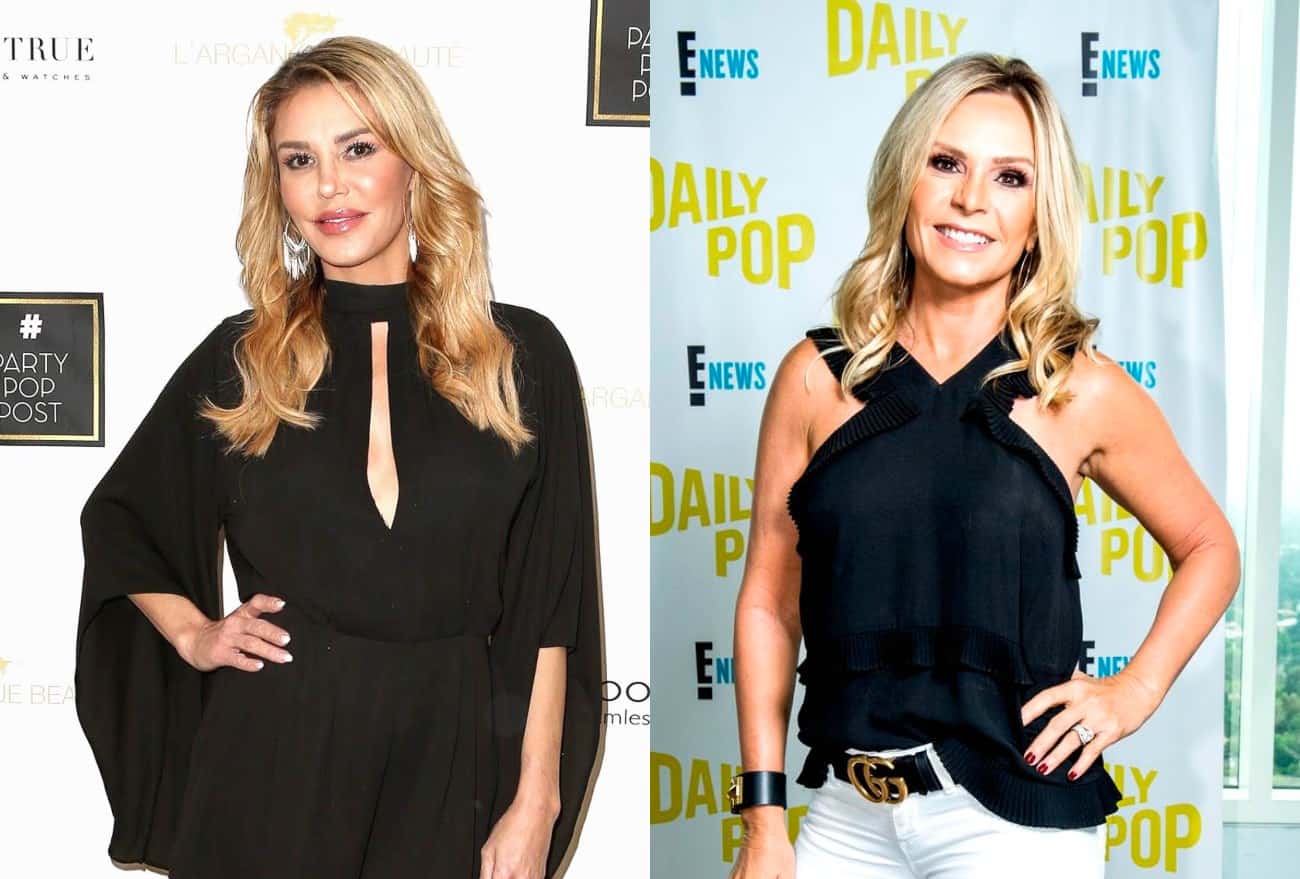 Brandi Glanville took aim at Tamra Judge during the latest episode of her YouTube series, Drinking and Tweeting.

After the women butted heads on Twitter following Brandi’s comment about the Real Housewives of Orange County cast being “hypocritical a**holes” for spreading the “train” rumor about Kelly Dodd, Brandi leaked a private message sent to her by Tamra amid their feud and slammed her as a “coward.”

In the message, according to the former Real Housewives of Beverly Hills cast member, Tamra wrote, “I didn’t call you unstable. I was referring to a cast member. When I said Kelly is the New Brandi, it’s because you guys go full force mean on your comments about your cast members. I don’t really care to fight with you. I don’t even know you.”

“You started this when you called me a hypocritical a**hole,” Tamra reportedly added.

While Brandi did slam the RHOC cast for being just that, she told viewers of her YouTube series that her message was a “general tweet” and pointed out that she didn’t tag or mention Tamra. So, when it comes to Tamra taking offense to the tweet, Brandi said she likely did so because she knows she’s a “hypocritical a**hole.”

According to Brandi, Tamra is “the Queen of Mean” and she can’t understand why the RHOC star would make legal threats against her while also slamming her publicly for being “unstable.”

“Literally all I did was say that you were ‘meh,'” Brandi explained. “You’re talking sh*t about Kelly saying she pushed her mom down the stairs, saying she’s not there for her daughter, saying she’s unstable. I think that you’re just jealous.”

Brandi then joked that Tamra may be going through “meh-nopause” and said the two would soon be face-to-face at an event in Orange County.

“We can talk eye-to-eye. We just need two apple boxes for you,” Brandi joked.

Brandi went on to say that Tamra is a “coward” and told her never to DM her again.

“Please stop talking sh*t about the people you say that you care about that are on your cast, because I feel like, yeah, sometimes people go low, but you’re lower. Like we’re on the sidewalk, you’re in the gutter,” Brandi added.

In addition to the RHOBH star taking aim at Tamra on her show, Brandi also mentioned her fellow “housewife” on Twitter after seeing that Tamra suggested Kelly read her book, Drinking and Tweeting, after making a phony wedding announcement on Instagram. 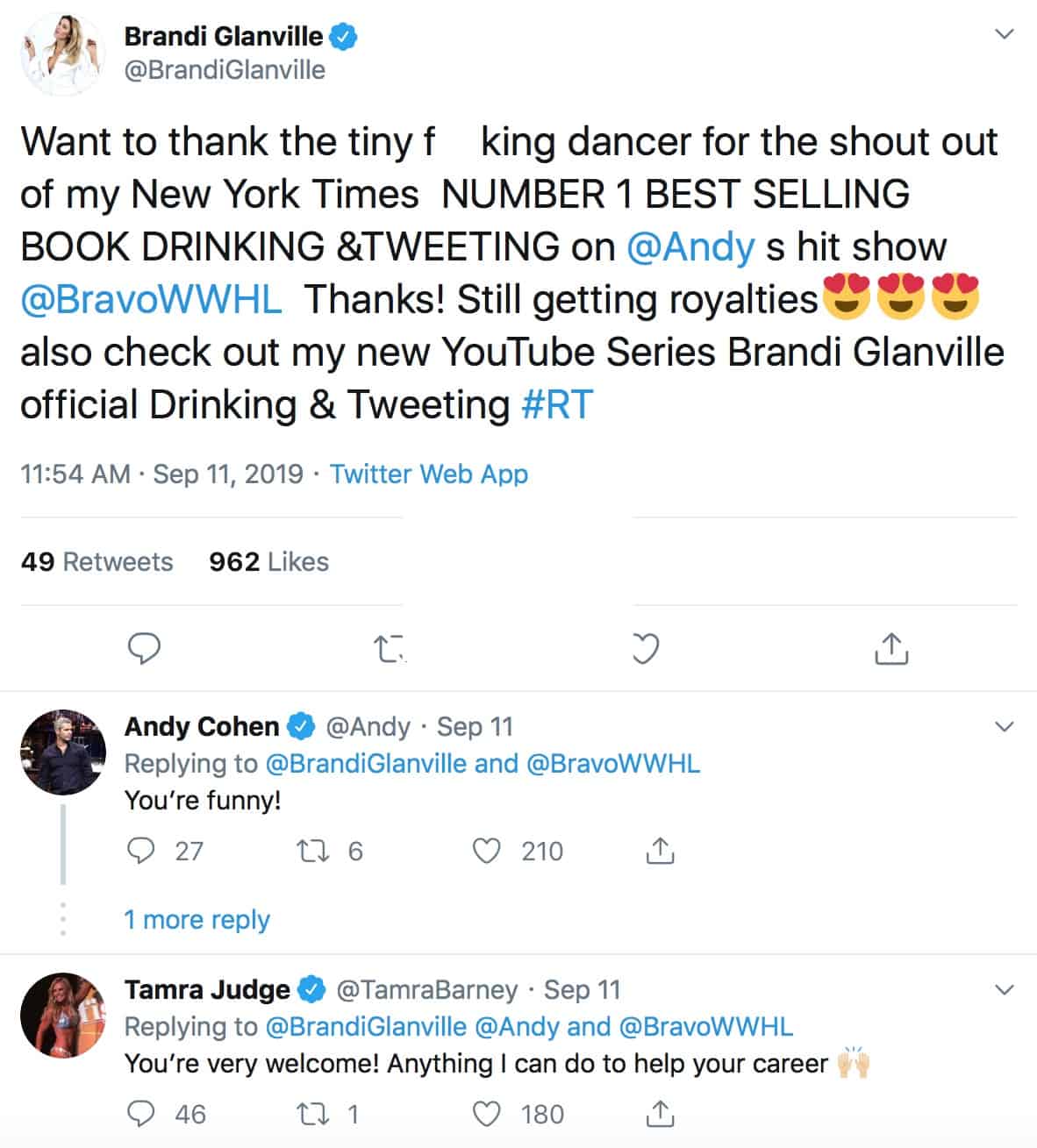 After the tweet was shared, Andy reacted to the online drama by telling Brandi she is “funny” as Tamra suggested she helped boost the book’s sales.

“You’re very welcome!” Tamra tweeted back to Brandi. “Anything I can do to help your career.”