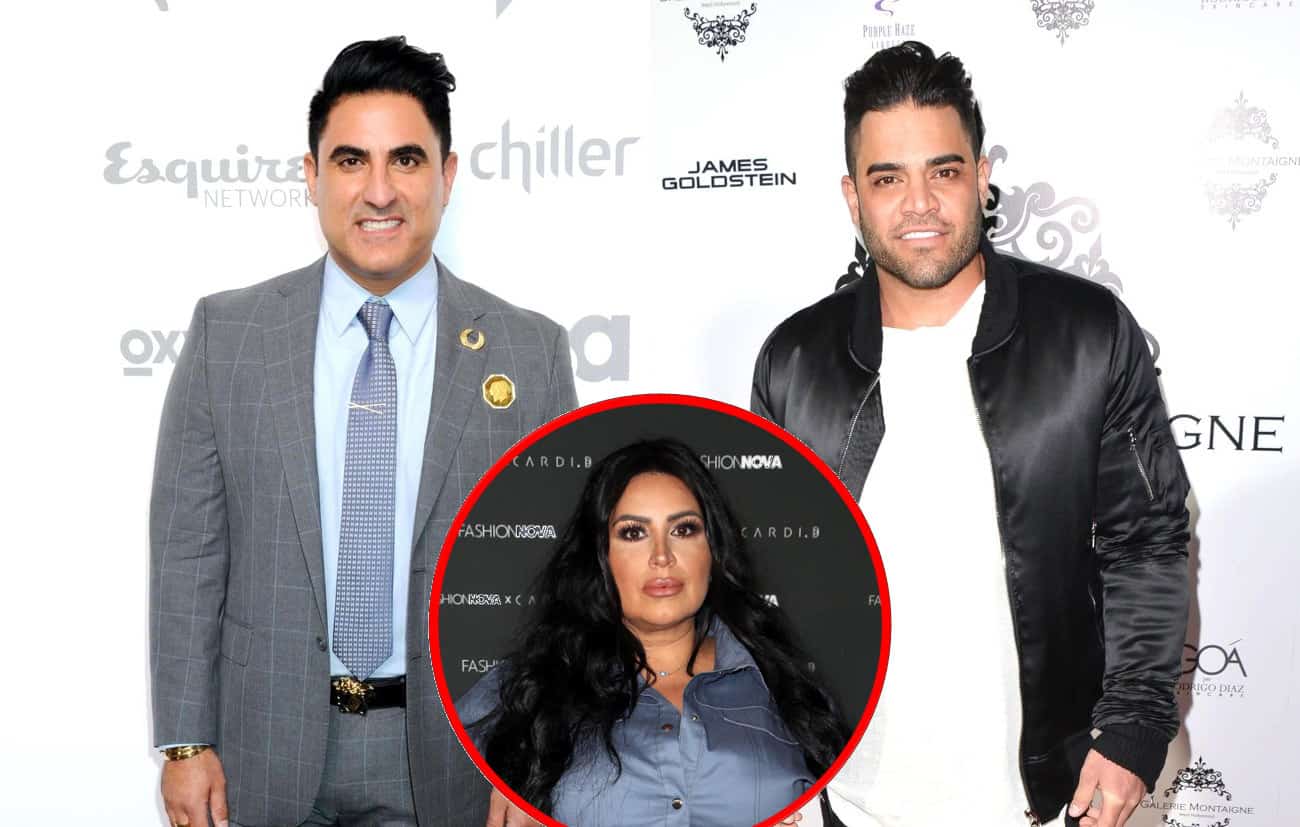 Things are getting ugly between the cast of Shahs of Sunset.

Ahead of the Bravo TV reality series’ eighth season, Reza Farahan has taken legal action against his former “homeboy,” Mike Shouhed, who, along with cast member Mercedes “MJ” Javid, reacted to the shocking news on Instagram.

“Gawdamn! GUESS HE’S ‘NOT MY HOMEBOY’! LOL,” Mike wrote with a screenshot of the letter of cease and desist on October 17.

“What’s the f**kin world come too?” he continued. “This what happens when dudes got his panties in a bunch! You got my [number] bro, you could of just texted me and we handled this like 1.5 [minutes], instead of making [your] cousin write this letter.”

In the letter, Mike was accused of using Reza to sell products on his website, TrueGoldBrand.com, without his permission. Mike was told to remove those items from the website and any other locations they may be for sale.

Following Mike’s post, he shared a video of himself on his Instagram Stories in which he was seen wearing a “Reza is My Homeboy” T-shirt. In his caption, Mike told his followers to read his past post and included an emoji of a head-exploding. 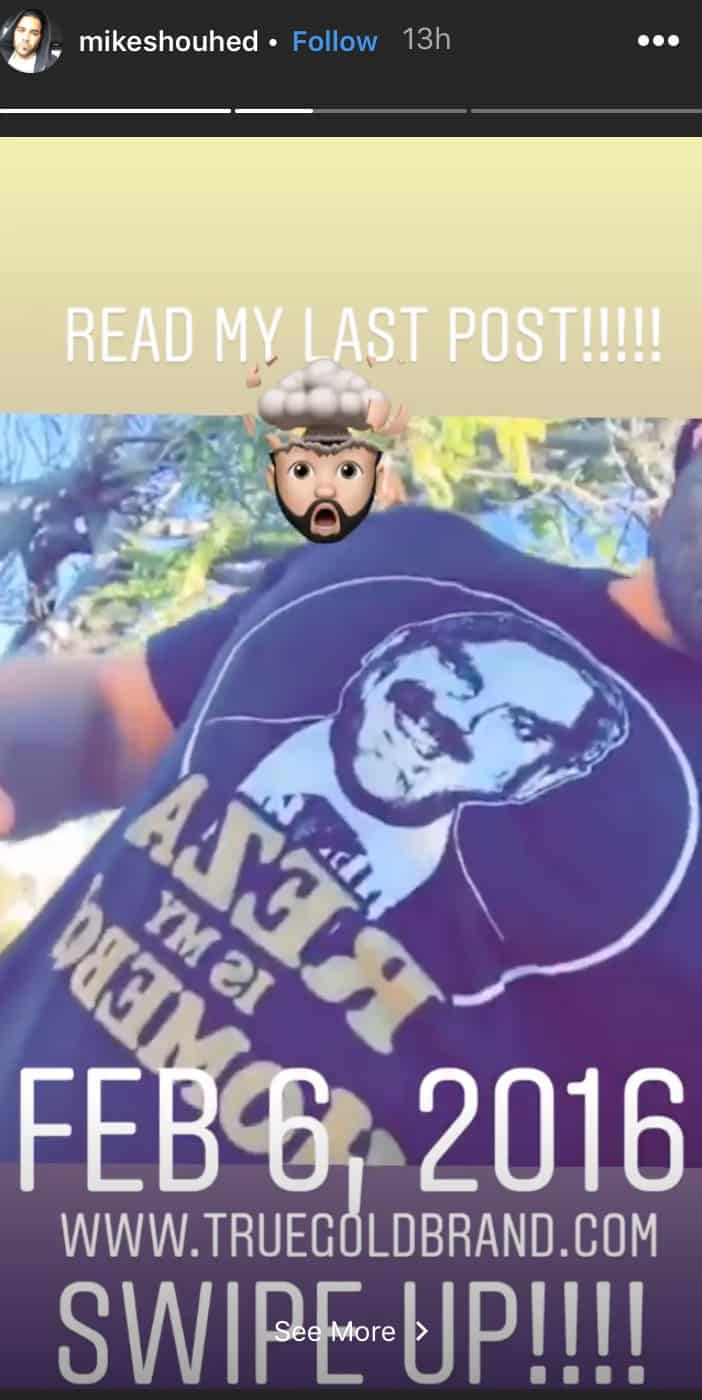 In addition to Mike sharing his thoughts on Reza’s legal letter, MJ posted a message to her fans and followers in which she told them that Reza had sunk lower than she ever would have imagined.

“Taking legal action on your best friends is really ‘cool,'” MJ wrote. “Just when you thought [he] couldn’t sink any lower, he did!”

MJ also included a link to Mike’s products in her post and encouraged her audience to check out her co-star’s items. 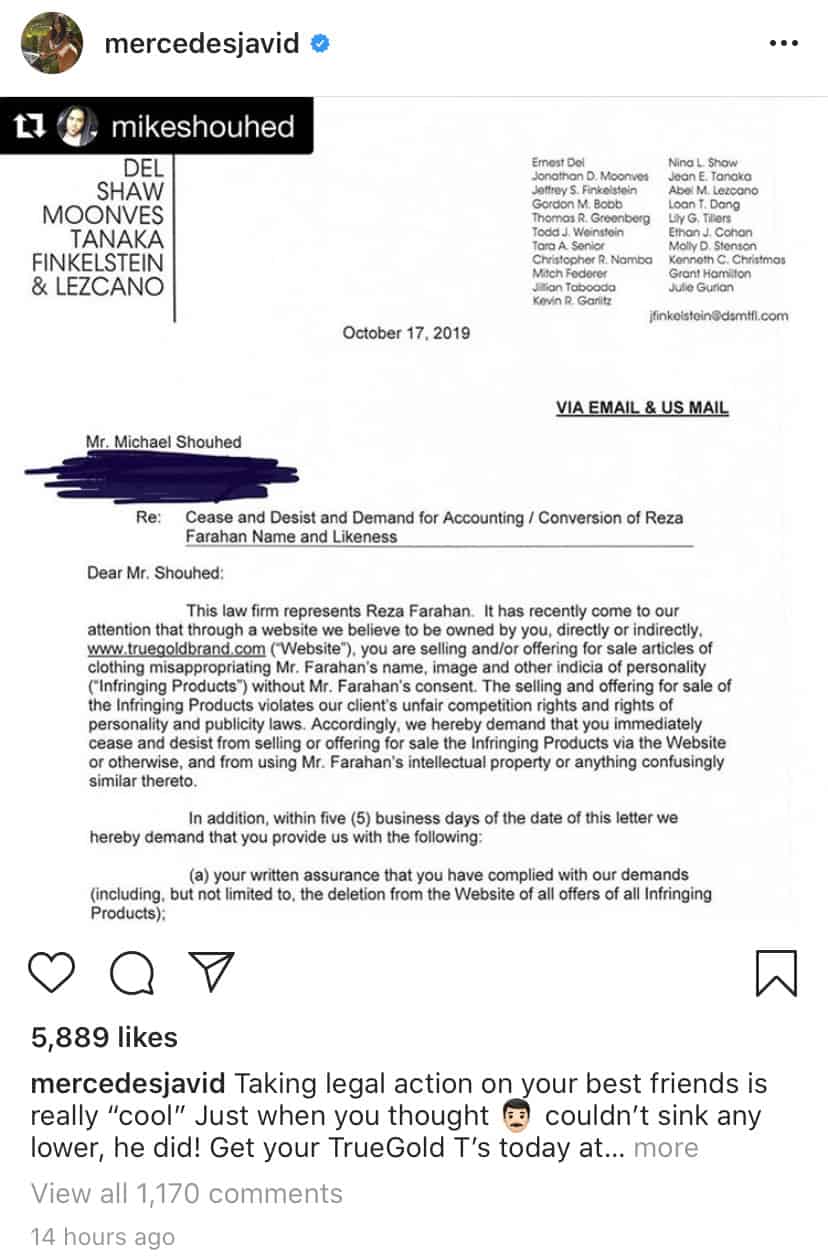 It’s no surprise to see MJ on Team Mike. After all, she and Reza have been feuding for the past several months. Plus, over the summer, after Reza failed to visit MJ in the hospital after she suffered a near-death experience while giving birth to her son, MJ’s husband, Tommy Feight, was sentenced to time behind bars after vandalizing the home Reza shares with husband Adam Neely.

Shahs of Sunset season eight is expected to air on Bravo TV sometime in the coming months.