Home Real Housewives of Orange County News The RHOC Recap: Tamra Accuses Shannon of Being the Puppet Master, Plus Ryan Cries Out for Help

The RHOC Recap: Tamra Accuses Shannon of Being the Puppet Master, Plus Ryan Cries Out for Help 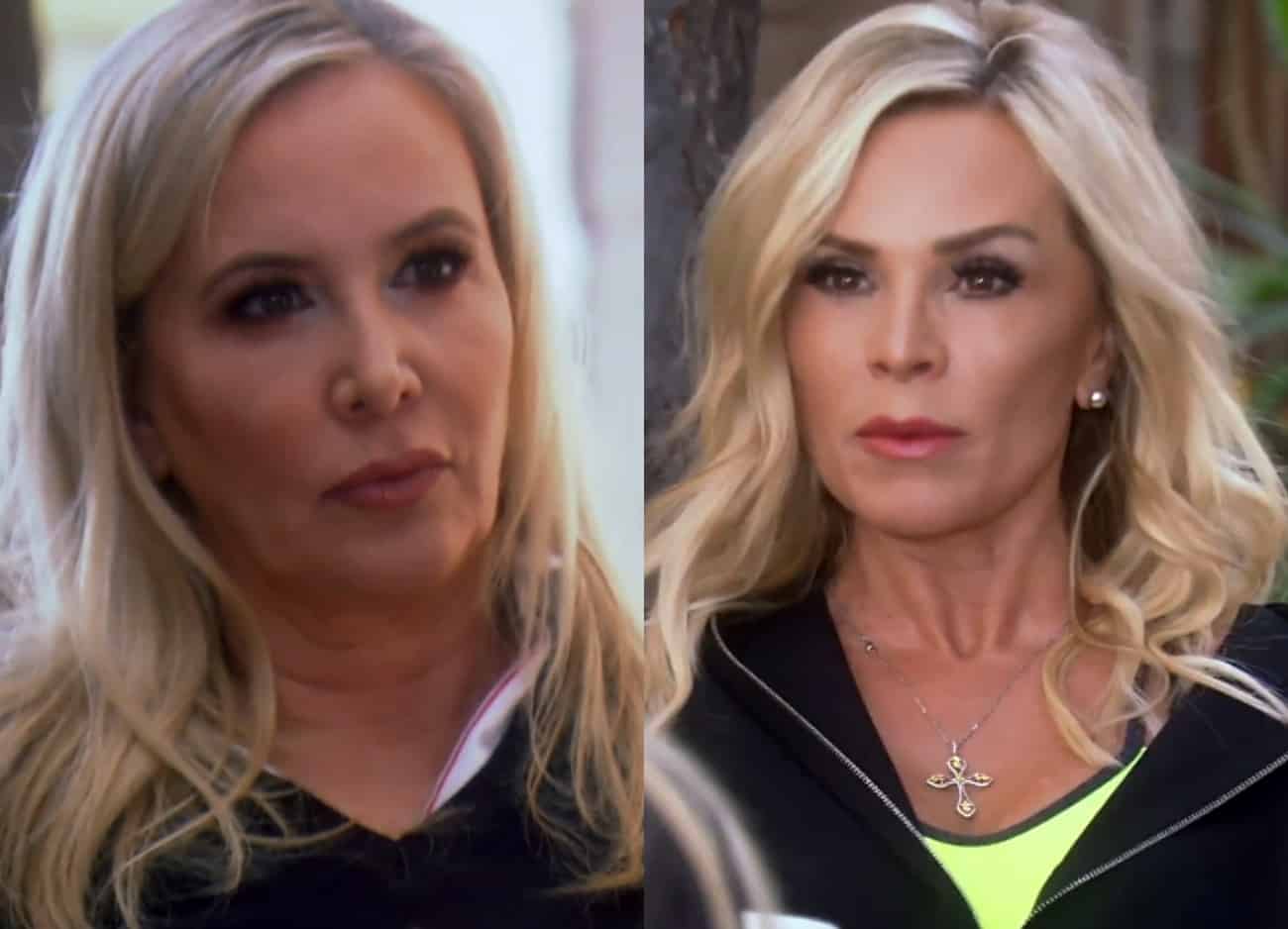 Same drama, different bad guy on this episode of the Real Housewives of Orange County.

“Honey, I’m home!” Dr. Brian does nothing but make fun of Kelly in her trendy turban and feign some sage advice every once in a while. Emily graces the couple with her company and they make some polite chit chat.

Hold up. Dr. Brian has never been married?! Can’t say I am shocked… They eventually get right down to the heart of the meeting: sh*t talking Tamra. Kelly is livid with Tamra, as she found out that Tamra was the one who started the train rumor…or so she has heard. Because Kelly acts, then thinks, she sent Tamra a nasty, threatening text message essentially telling Tamra she is trash and a terrible human.

Tamra is back from her getaway with Eddie, and she grabs some lunch with Gina. Tamra shares that she received some hateful texts from Kelly while trying to have a relaxing vacation. Needless to say, Tamra’s vacation was thwarted. Gina sings like a bird. She tells Tamra all that went down at the table when she wasn’t there and Tamra is p*ssed. Kelly is mad at Tamra, and therefore, she is trying to get everyone to turn on her. Kelly told Shannon that Tamra says nasty things about her and so the madness unravels.

Gina lets her bestie, Tamra, know that she doesn’t need this stress in her life. Tamra cry-talks about how much she is going through and asks Gina for advice on what she should do. I would 100% never ask Gina for advice. I mean, have you seen her ensemble choices lately? And don’t even get me started on her hair…

Braunwyn’s daughter, Bella, is getting ready to get bribed, er…I mean, accepted into college. Braunwyn is pumped for her kid. Can we discuss Braunwyn’s outfit choice for the college tour? Like, lady…let’s talk about appropriateness. At least she is taking her daughter to go see some schools…as opposed to Shannon. Her daughter, Sophie, is “behind the eight ball” with the whole college thing, yet Shannon states, “I will do anything to get my daughter into college.” Ah, famous last words there, Shan.

Sophie’s college counselor comes over to essentially tell her what GPA she needs in order to get accepted and that she needs to make a list of what schools she would like to attend. Basically, Shannon is throwing money out the window listening to this chick. I could have told her that. Sophie states that she is writing a book about divorce and that should make her stand out in the pool of applicants. I love how Shannon is taking notes on this eye-opening advice from the counselor. Insert eye roll here.

The parenting on this episode is off the charts. Let’s discuss how Jolie is going to London all by herself. Sounds like a ship ya off trip if I ever heard of one. Jolie comes out and tells Kelly that she seems angry all the time and that’s because she IS. Kelly explains that she “hates people,” and Jolie realizes that Tamra and company actually do treat her mother badly. What Jolie is not seeing is that her mom ain’t no saint either…

Ryan Trump is headed to therapy with his mom, Tamra. This is the first time the duo is seeking professional help. Tamra explains that she has been seeing “swings of emotions coming through” with Ryan and she hasn’t seen him happy in a long time. Tamra shares the story of Ryan…all of the nitty, gritty details. She states that she was 17 when she had Ryan and he feels a lot of resentment towards his step-siblings.

Ryan also broke down during therapy as he was asked to write down how he feels about himself. His words were quite heartbreaking as they included statements like, “I’m a bad person, worthless, I’m a failure, can’t succeed, I don’t belong, I don’t matter.” Seems like Ryan is experiencing depression, especially as the therapist shares Ryan’s inner thoughts. Here’s to hoping Ryan gets “unstuck” as the therapist encouraged him to stick with therapy. The highlight of Ryan’s life, and perhaps the therapy session as well, was when he discussed how much he loved his daughter, Ava, who he also feels unconditional love from.

Gina’s parents are in town. While her kids run around like maniacs, Gina tells her ‘rents that Matt is looking for a job in Orange County and wants to really get back together. Gina seems excited about this, but she’s also concerned about his jealousy issues. Gina states that she “still wants to get divorced” (wait, what?!), cuz ya know, she is dating…hello…Dr. Hottie! Maybe she should stop sleeping with Matt, then. Talk about mixed signals. (Also, is a chinchilla a marsupial? OMG.)

Later, at Tamra and Eddie’s house, Tamra talks about the therapy session with Ryan. Eddie pretends to be lending an ear as Tamra goes on and on about her troubled, sad son. “When you’re struggling with your childhood issues as a man, I don’t think you’re a man.” Ooph. Eddie. Way to show some sympathy. His body language says ‘shut the f*ck up already about these women, Tamra.’ Then, he outright says, “You need new friends” when Tamra begins explaining the newest drama in the group.

Kelly, in her ridiculously coordinated get-up, Emily, and Braunwyn are out to lunch. Kelly gets some advice from the ladies about making amends with her mother, and Kelly explains that she is afraid of being rejected by her mom. Emily feels like a pro when it comes to mother-daughter relationships, as she had a tough time with her mom. Naturally, Braunwyn only talks about herself and her daughters because that’s all she is capable of doing.

Over at the coffee shop, Tamra confronts Shannon and cuts right to the chase. She demands to know what “this sh*t storm is about.” Tamra wants to know what caused Kelly to send those malicious text messages and why Shannon is giving her the cold shoulder. Shannon remains calm, cool, and collected as she retorts that she feels blindsided by all the tea Kelly spilled. Shannon is hurt by the supposed things Tamra told Kelly about Shannon. Tamra does a great job of twisting things, as she is the queen of manipulation, and she states, “There’s a missing link here.”

For once, Braunwyn has something witty to say. She states that life with Shannon and Tamra is like “a chess game of middle-aged women.” Exactly! Shannon spits out my all-time favorite housewives’ line: “I have been nothing but a good friend to you.” Tamra calls SHANNON a puppet master. Shannon tries to make it clear that she didn’t want to ruin Tamra’s vacation, which is why she seemed so “distant” while all of this was happening.

I love the receipts that Tamra printed out. The text evidence. Tamra, almost proudly, shows Shannon what Kelly was saying to her. Upon reading the messages, Shannon appears to forgive her BFF, Tamra. The problem Tamra is finding is that just because Kelly is mad at Tamra, doesn’t mean that Shannon needs to be turned against Tamra, too.

I’m gonna need a map to figure out this fight soon. Tamra manages to make Shan feel like Kelly is the bad guy where Tamra was actually the one who started this mess. I mean, Tamra really was the one who started the train rumor. Even if she did just state the word “train,” it was put out in the universe. I don’t really blame Kelly for being livid with Tamra. But alas, in Tamra’s eyes, “To me, it sounds like the common problem is Kelly Dodd.”