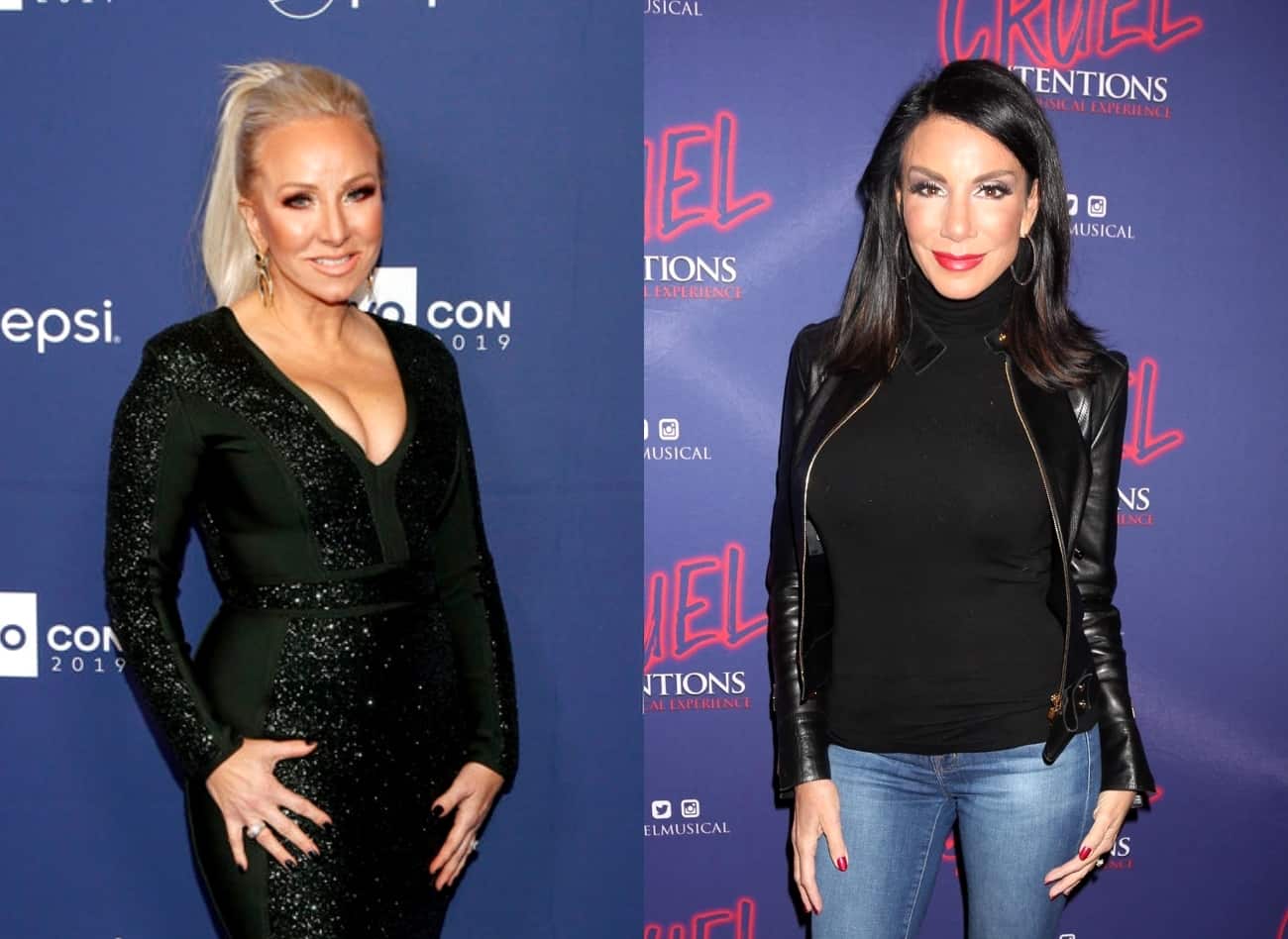 Margaret Josephs may be filing charges against her Real Housewives of New Jersey co-star, Danielle Staub.

Following their on-screen altercation during Wednesday night’s episode of the RHONJ, Margaret shared a series of messages with her fans and followers on Twitter in which she hinted at potential plans to take legal action against Danielle as she revealed new details about their fight and explained why she threw water at her longtime nemesis.

In response to a fan who pointed out that Margaret “hasn’t and won’t press charges” against Danielle, Margaret said that because of the laws in New Jersey, Danielle could be charged with assault and battery for dragging her by the hair from behind.

“You can have your opinions but in NJ assault is causing bodily injury,” Margaret explained. “She can be actually charged with aggravated assault and battery. I cannot. The only reason I haven’t is because I don’t want to keep reliving this. It doesn’t mean I can’t change my mind.” 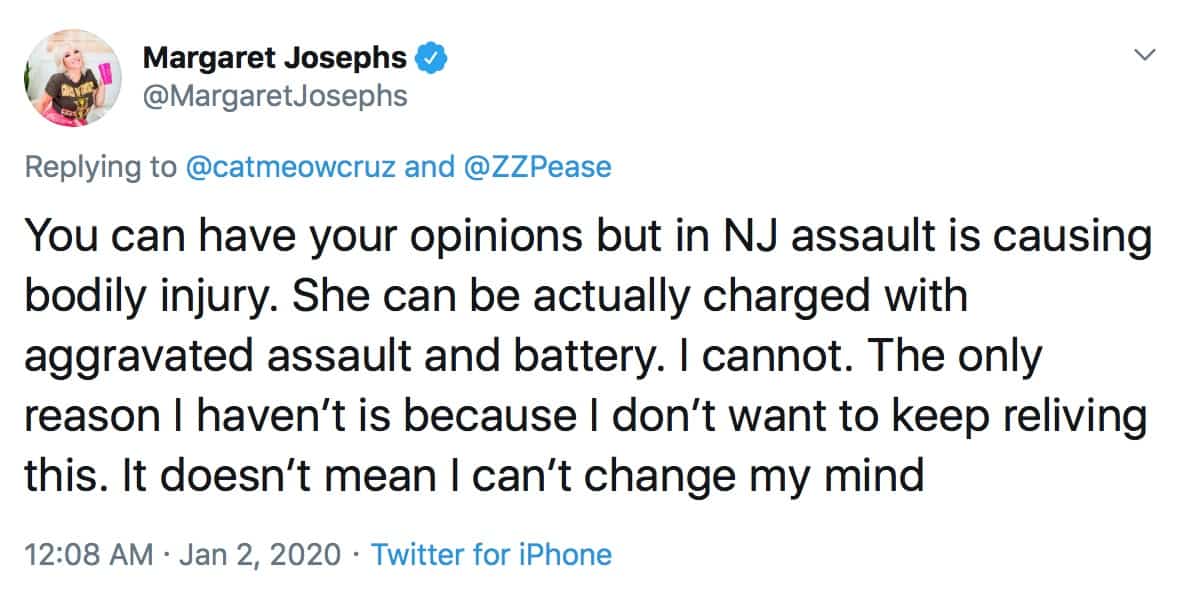 As Margaret seemingly contemplated filing charges against Danielle, one person said that because of their history, and the RHONJ season nine encounter in which Margaret pushed Danielle’s ex-husband, Marty Caffrey, into a pool, Margaret could never win a case against Danielle.

“Still battery in a court of law. No way Margaret could win a lawsuit when they show the tapes of wine in the face last year, the push into the pool of Marty & then the water over the head before Danielle responded. Same thing happened in Potomac filming. Judge dismissed both,” the fan pointed out.

“The only reason I am replying is because you are clearly not an attorney. Each incident is isolated,” Margaret replied. “Marty & Danielle are 2 separate people & have nothing to do with each other. Marty threw 2 drinks on my husband as well all on camera.”

“Keep watching and you will see why I can win,” she added. 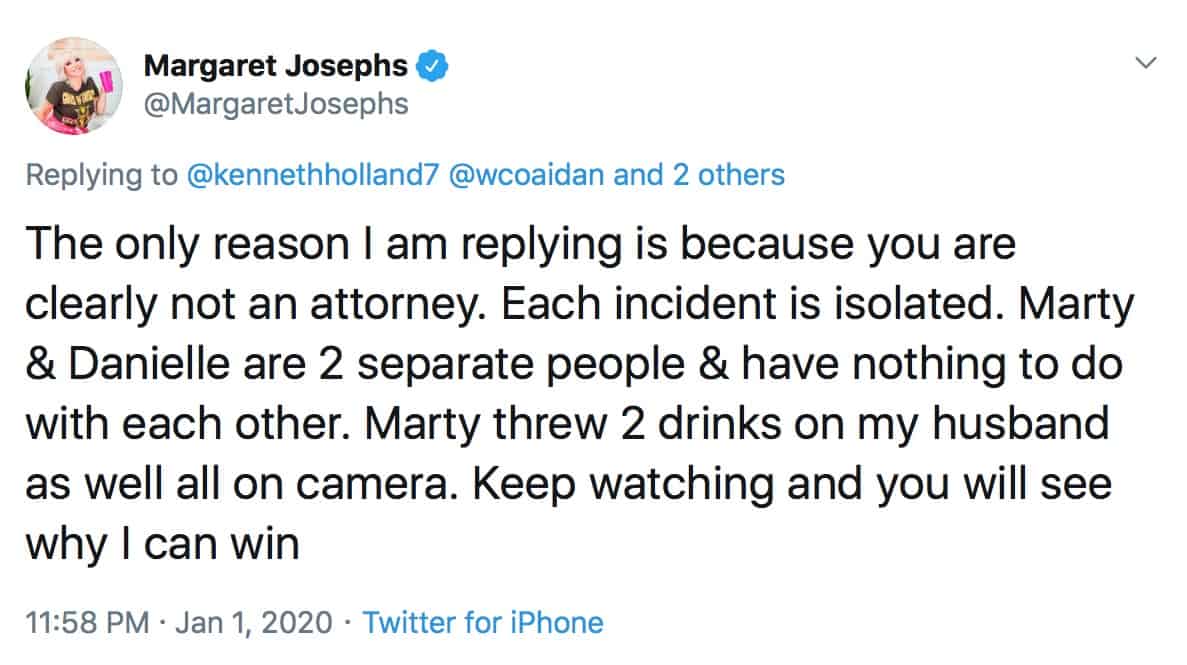 According to Margaret, who seemingly sparked Danielle’s physical reaction with her water toss, there was a lot more that led up to their “horrific” encounter than fans saw on RHONJ.

“This back & forth was longer than what was aired,” Margaret revealed. “I walked to the bathroom,I backed up numerous times. I wanted to put this to bed once & for all & never see her again. It was when she got so close again I poured it. I’m not saying it’s right. She still says she’s happy she hurt me.” 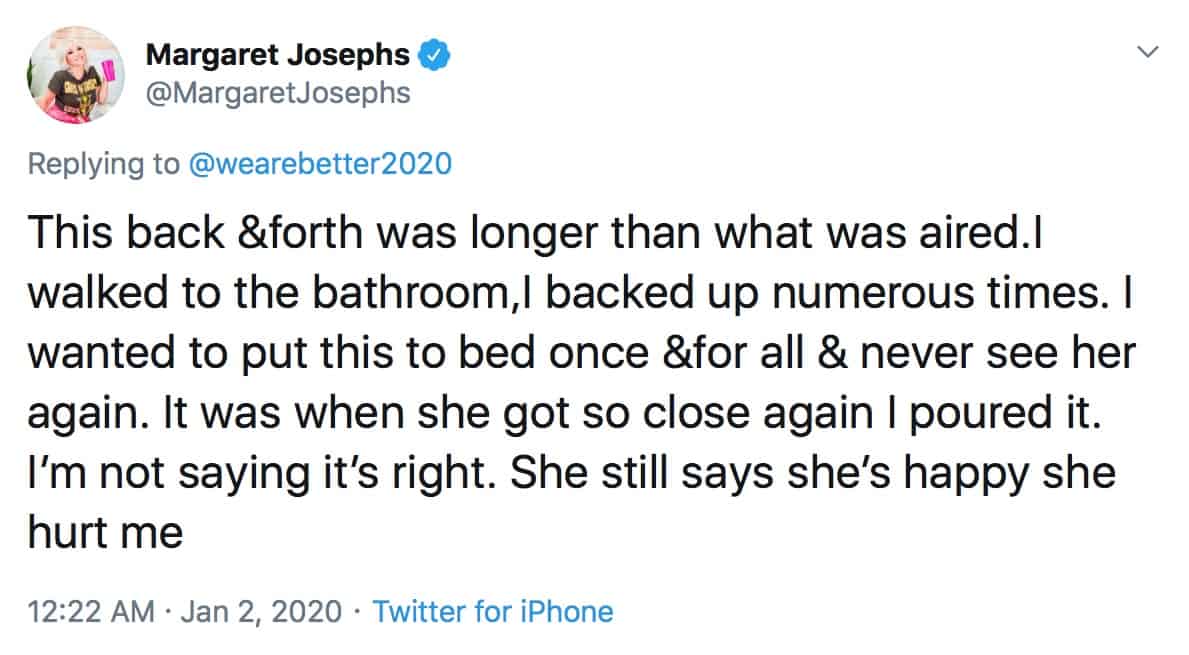 “What about the water dumped over her head?” another fan asked.

“I responded I did it, it plays quick and seems rash. It was a half hour after a back and forth,” Margaret wrote. “It was after her pushing me and clearly looking to attack me. I poured it out of fear and not knowing how else to diffuse the situation.” 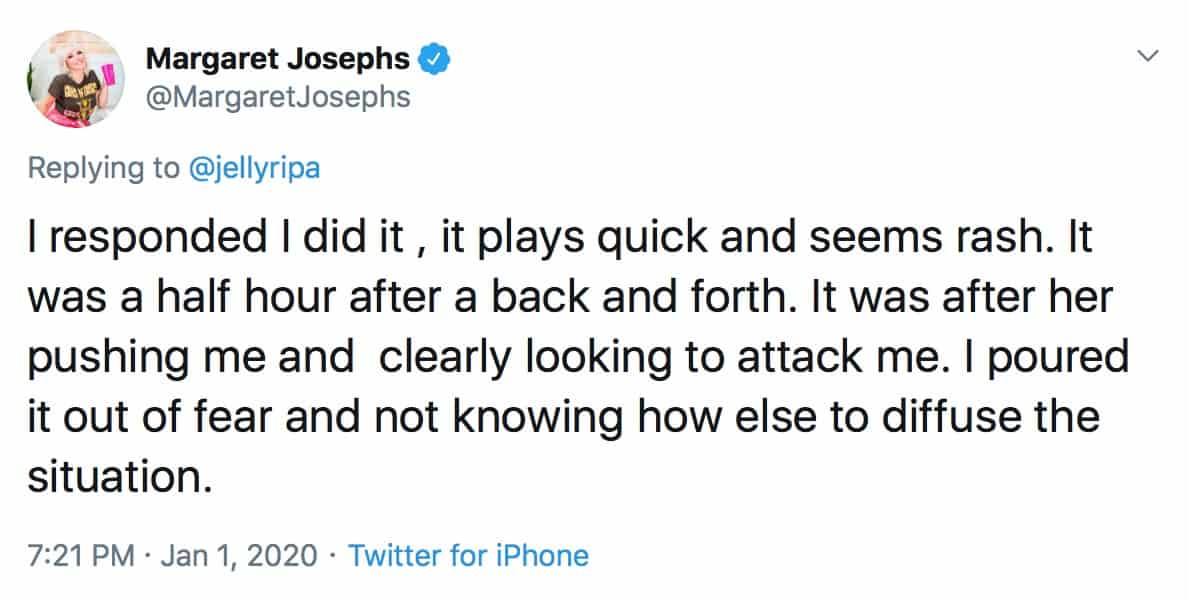 Following their dispute, Danielle appeared on the RHONJ: After Show, where she confirmed she had no regrets about taking physical action against Margaret and said she felt “happy” with herself after their heated interaction.