RHOD’s Brandi Redmond Calls Out Kameron Westcott After Leaving Wellness Center, Says She Refuses to Be Her ‘Victim,’ See Her Deleted Post 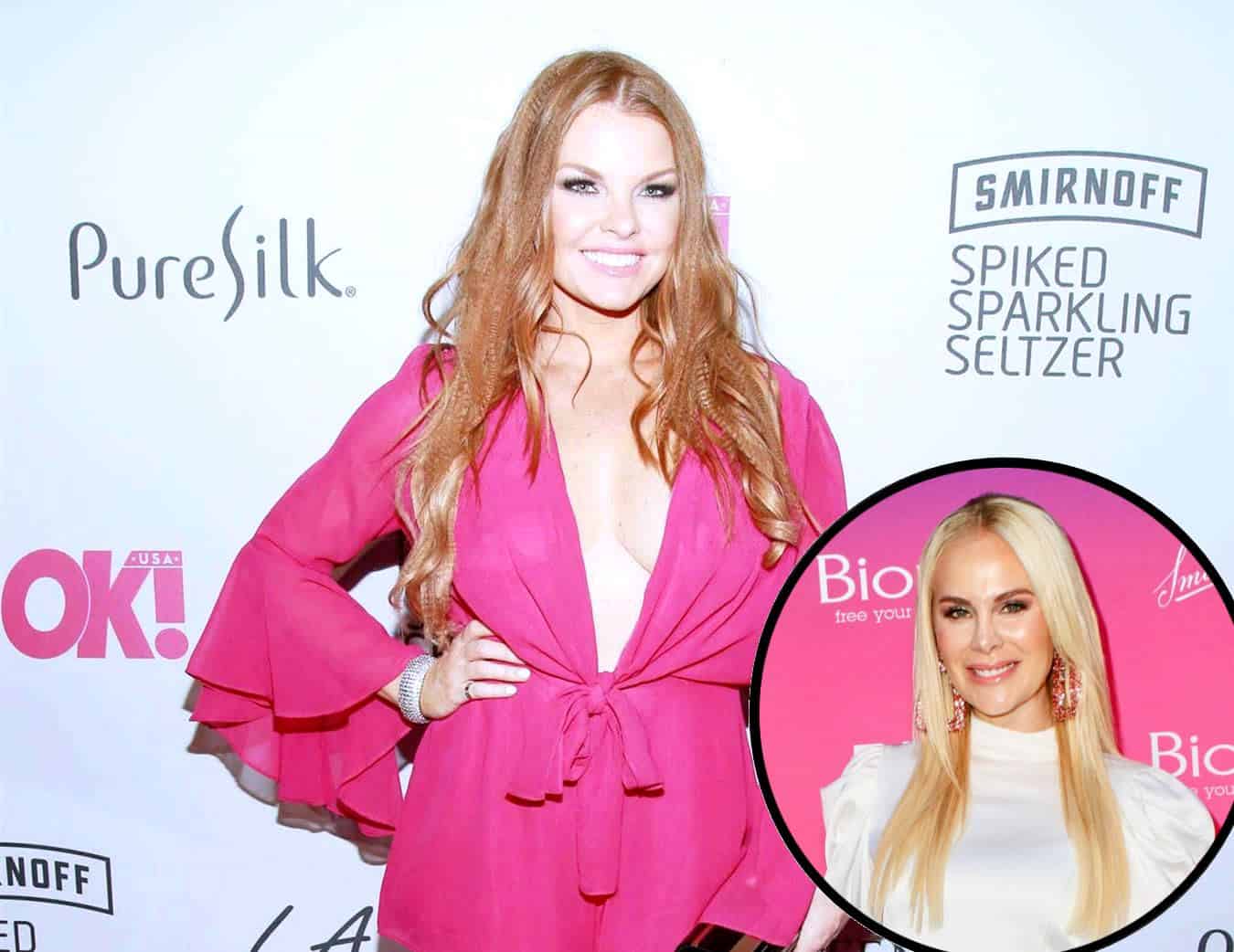 Brandi Redmond released an emotional video clip to her fans and followers on Instagram on Friday night.

One week after checking herself into a wellness retreat, the Real Housewives of Dallas cast member took to her Instagram page, where she opened up about the dark depression she fell into after being faced with allegations of racism, which were prompted by a video in which she seemingly poked fun at Asians, and called out her co-star, Kameron Westcott.

“Thank you to these souls that cried with me, prayed with me and were a positive light in my life & helped my family during this difficult time,” Brandi wrote in the caption of her January 17 post. “Stephanie & Travis, D’Andra & Jeremy, Mama Dee, Kary & Eduardo, my parents, my family, close friends, and my amazing husband and children. I am so grateful for God helping me through this, allowing me to heal and love myself. To those that set out to hurt me, know that I still have compassion for you in my heart.”

However, in the first caption of her post, Brandi also called out Kameron and LeeAnne Locken‘s wedding planner – Steve Kemble.

“Kameron and Steve, I forgive you but I won’t be your victim anymore,” Brandi wrote in the screenshot captured below by Reality Blurb. 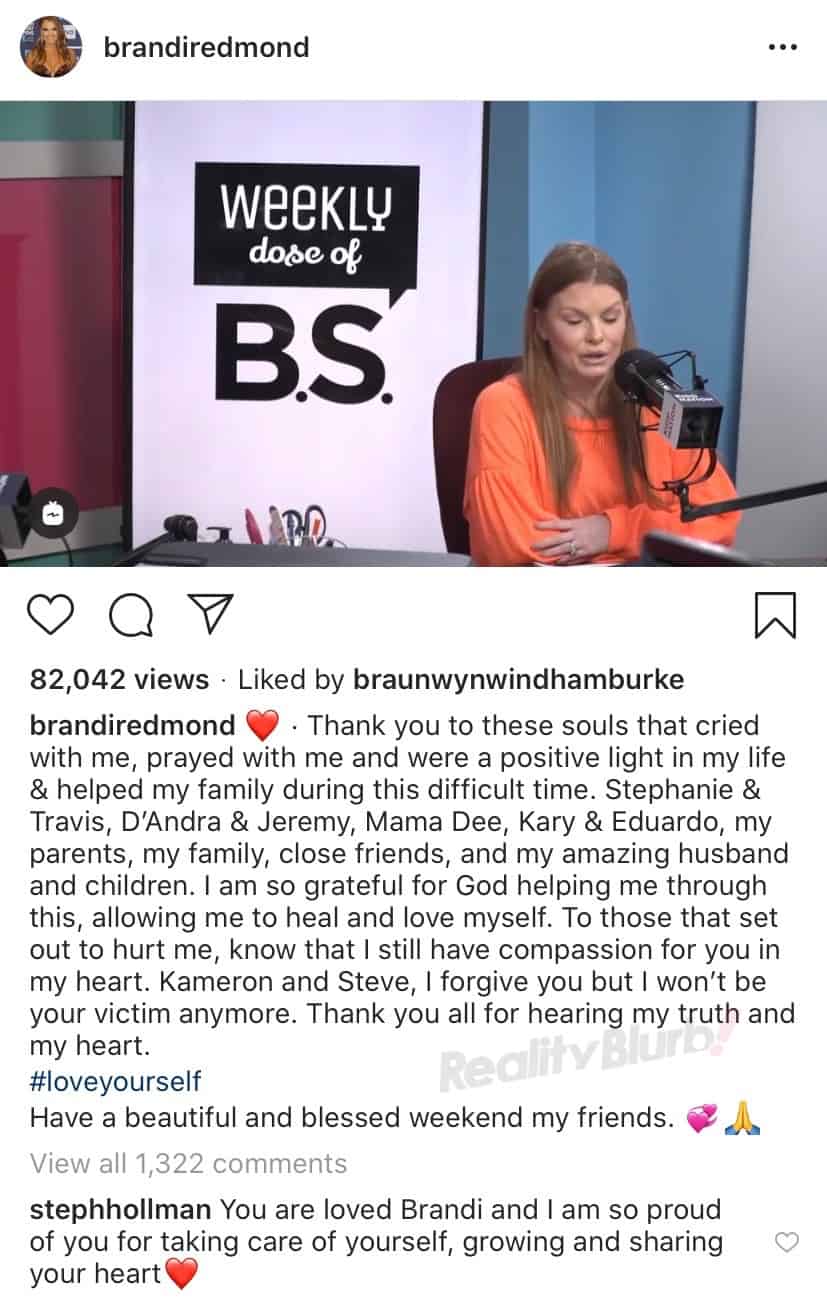 As RHOD fans will recall, allegations of racism first began swirling the web earlier this month after Steve shared the video below with his Twitter followers as LeeAnne was slammed as racist due to her comments about Kary Brittingham and her Mexican heritage.

Days after it was shared, Kameron took aim at Brandi on her Instagram Stories, saying that she felt comfortable calling Brandi out as her friend and stating that “none of this is ok.”

“I can’t believe we even have to go over these things in 2020,” Kameron wrote in her post. “I will not take part in humiliating anyone, but I have to say that these things will not fly and I am not going to sit and say nothing about it either.”

In Brandi’s emotional video clip, the mother of three opened up about what she went through after the old video resurfaced.

“I felt so much shame. I felt bullied. I didn’t feel like living anymore. I went into this deep, dark depression. I couldn’t eat, sleep, I wasn’t taking care of myself or my family or my responsibilities. Every time I would see something negative, I would start throwing up. I didn’t feel like life was worth living and I went to Bryan and I told him I needed help,” she recalled.

According to Brandi, she’s very aware that the video was shared “as a deflection” and feels completely blindsided that someone who has been on the Housewives journey with her would take part in such a “take-down.”

“We do this together, we honor each other. Knowing that these women should know my heart and who I am, I just felt blindsided and gutted by [that] individual,” Brandi admitted. “It went from making an example out of me to… a campaign for hate and bullying. [There] was [an] intent to humiliate, shame, [and] bully.”

Luckily, after spending time at the wellness center, Brandi is in a much better place after going through what she calls a “life-changing” journey.

“I see everything very clear. I do have my smile back,” she confirmed.

UPDATE: Steve just responded to our story, stating he takes full responsibility for the video getting out and adding that Kameron has zero blame in this.