Home Real Housewives of New Jersey News RHONJ Reunion Part Two Recap: Teresa Slams Caroline as a “Sh-tty Person” and Dishes on Reuniting With Her as Jennifer Feuds With Jackie!

RHONJ Reunion Part Two Recap: Teresa Slams Caroline as a “Sh-tty Person” and Dishes on Reuniting With Her as Jennifer Feuds With Jackie! 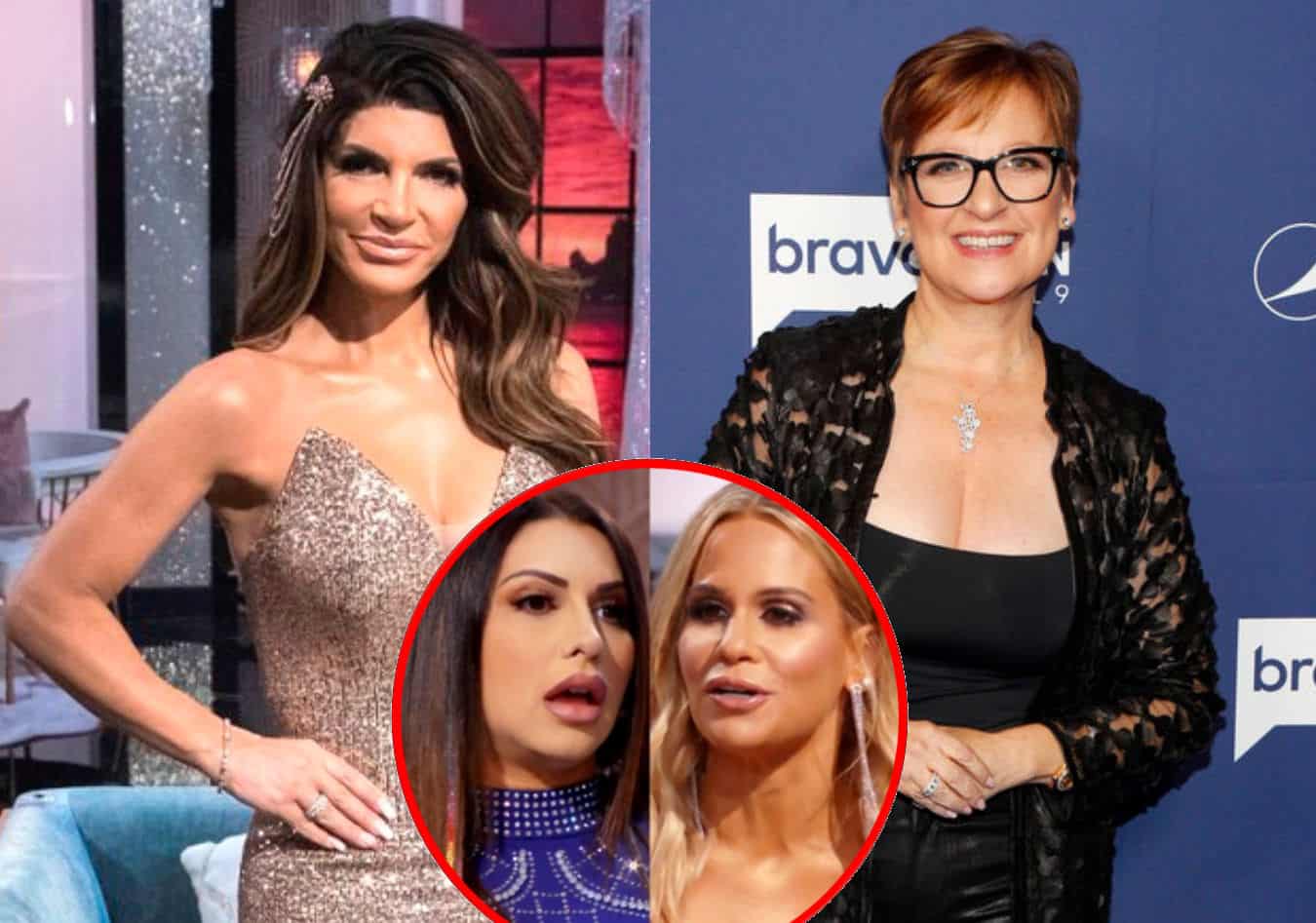 This week on The Real Housewives of New Jersey, we are joining the ladies for part two of the reunion. The guys and maybe Danielle will join them to hash out what transpired this season. Let’s get started with Teresa Giudice dishing on what went down when she reunited with Caroline Manzo to film a Superbowl commercial amid their ongoing feud.

Teresa is questioned about her Superbowl commercial with Caroline, and she reveals how it came about after first admitting that she definitely did it for the ‘money.’ According to Teresa, Caroline reached out to her lawyer, who then tried to set up a three-way phone call for them to clear the air before the video shoot.

“I don’t really want to f–king talk to her,” Teresa recalled telling her attorney. “I’m like, are you kidding me? So we got on the phone three-way and we started talking and then we got into it.”

Teresa added, “This is what she said: ‘When we see each other, we are going to sit down and talk’ and I’m like, ‘Excuse me.’ I said, ‘We’re not doing anything.'”

In the end, Teresa shared that there weren’t many fireworks on the set as the two ladies simply agreed to disagree as they both acknowledged that they would never be able to see eye to eye on certain things.

Teresa is asked about calling Caroline a “rat” last year, and she tells Andy that while she doesn’t believe Caroline turned her and Joe in to the authorities, she does think certain comments Caroline made on the show drew negative attention to her and husband Joe. Untrue. That is why she is pissed at Caroline. Boo fu**king hoo. She will never be friends with Caroline because she is a “shi**y person.” Can you say projection???  Caroline is “winning” IMO for not having Teresa as a friend.

Also during part deux of the reunion, Melissa calls Jennifer a f**king a**hole over throwing the knife. Game on, Bit**hes! Teresa is called out on the fact that she doesn’t have Melissa’s back. Truth.  She is still defending Jennifer over her own sister-in-law, Melissa. Andy tries in vain to explain the “winning” statement regarding Jackie. Good luck explaining that to this group of rocket scientists.

Production shows some of the clips with Joe Guidice’s finer moments. The Italy trip is shown when Joe still appears to have feelings for Teresa but she is like dunzo. Teresa is still pretending that she and Joe had a great marriage.

Melissa shares what she witnessed, which totally conflicts with Teresa’s version. It is clear that Teresa is still trying to maintain the image that she wasn’t treated like a doormat in her marriage. Teresa’s eyes narrow at Melissa when she suggests otherwise. Teresa, just own it! Your marriage wasn’t a fairytale!

Andy shows the picture of Teresa with a group of guys. Teresa claims that while she was in Miami it was innocent fun. She wasn’t getting her plumbing unclogged. The tabloids show the pics with Teresa and her boy toy. Where there’s smoke there’s fire…

Teresa is upset with Margaret when she insinuates to something more. She claims in her ITM that she is smarter than she comes across. So all of these years you have been just acting dumb?  Teresa says her kids don’t read the internet about their family. What teenager doesn’t read the internet or social media? Come on now, get your head out of the clouds.

Teresa shares that her brother-in-law Pete told Gia about the cheating rumors. She was furious that he did that. Teresa says Joe’s family blames her for their legal issues. If she hadn’t been on the show, it would not have brought attention to their lives . Face it, Teresa, you fell in love with the spotlight. You wouldn’t give it up even when you were faced with legal issues.

Margaret is questioned over her comments regarding the boy toys. She doesn’t care either way and won’t judge Teresa if she did it. She does, however, want her to be with a doctor or a lawyer. Preferably a lawyer, since they both seem to need one all the time!

Teresa tells Andy she hasn’t had sex yet. This woman wouldn’t know the truth if it smacked her in her head! She would like a nice Jewish guy. Jackie offers to set up not only Teresa but Dolores too with a nice Jewish guy. I would take her up on that since she is clearly winning with Evan #swoon.

If Teresa remarries, she would like to have another baby, possibly a boy. Jennifer doesn’t think there is anything weird about Teresa having a fifth kid but Melissa having a fourth is ludicrous. Stop drinking the Tre flavored Kool-aid, Jennifer!

The guys join the ladies and Bill is carried in just like the old days! Bill has really shown a cool side this season. I love the camaraderie with the other guys. He partakes in all of their activities — not like the other bore, David. Bill shares that he personally performed all of the plastic surgery on his wife

Andy asks about Frank’s girlfriend who is 30 years old. Dolores snarks that she has a curfew.  Not surprised by that at all. Joe B. is finally allowing other contractors in their house to finally fix it up. He has to be friends with them first .

Poor Evan is questioned about the lack of blow jobs in the Goldschneider residence. He didn’t play the victim role. He thinks he will hopefully “blow shame” his wife into giving him more BJs. Might work, Evan!

The clip is shown with the guys watching Danielle’s sex tape. The ladies aren’t happy that the guys are watching that trainwreck. Joe Gorga tells the ladies that they are hypocrites and would watch a tape if Evan was on it. I would agree about the sex tape with Evan. I would watch it too #hot.

The topic d David is brought up to Frank. He thinks Dolores should move on. Frank thinks David should move into his own house and take it from there. We all know now that Dolores is headed to NYC!

The kids’ party is brought up again. Evan is asked about his thoughts on overindulging kids. He makes a good point about teaching your kids to earn it instead of expecting it. When Bill is asked he gives the politically correct answer and won’t criticize others’ parenting. Smart man. His wife needs to follow her husband’s lead on that topic.

Bill enjoyed the fishing trip with the guys even though he got trashed. The topic of who is getting the most sex is brought up again. Jennifer talks about Bill being fully loaded and Gorga is shooting blanks. That was funny I have to admit. Sigh.

The sex lives and lack thereof is discussed by all of the couples. I am surprised most of the ladies aren’t into oral sex — only Melissa and Margaret. Jackie says Evan is not the reason she doesn’t get oral sex — she is not into it. Evan is fine with that since he has a low sodium diet. Lol.

Andy asks another extremely awkward question, “Who would you go for in the group?” Andy is probably hoping someone says his name #perv. Dolores and Joe Benigno have a thing for each other. I never noticed their flirtation before? Did you all?

Danielle arrives with Marty and her dog in a stroller. Andy announces she is there and Margaret is pulling her good luck crystals out of her purse to ward away this evil spirit.

The stupid video with Jennifer’s impersonation of Jackie is brought up again. Teresa is smirking while this is discussed since she blasted it out on SM. Jennifer is again unapologetic about her ignorant comments. Jackie tells Jennifer she is a poor role model. Preach.

Jackie won’t take advice from a plastic doll. LOL. Jennifer tells Jackie that money can’t buy you a personality. Well, Jennifer, money can’t buy you intelligence or integrity either! Case in point, Teresa!  I would zip it on this topic. You are losing this argument.

The other ladies ask Jennifer why she tiptoes around Teresa. Preach. I don’t know how we even can even hear her big mouth sometimes since it is usually buried in Teresa’s a**.  Jackie’s intelligence is mentioned and you can tell that is a sore subject with Teresa and Jennifer. Jelly.

Andy has lost control of these ladies and no one but Jennifer can get a word in edgewise. Put a muzzle on her, please!  She has to interject herself into EVERY conversation. Jennifer claims she didn’t have extravagance growing up, and that is why she is over the top. Margaret calls Jennifer a thirsty turtle under her breath. LOL.

Jealousy is oozing out of Jennifer’s pores when she says Jackie is always in head to toe Chanel. Melissa says, excuse me? Jennifer says she is actually a thrifty shopper. Yeah right, we believe that you shop in the Dollar Store all the time.

Jackie now says she doesn’t want a toxic relationship with Jennifer. Thank you Jesus! I swear Jackie is like EF Hutton — when she talks, people listen. Probably because she makes valid points and doesn’t spew nonsense. I have a headache after listening to Jennifer’s loud mouth this episode.

Next episode, Danielle won’t come out of the dressing room without being given prime seating next to Andy on the cool kids’ couch. Teresa and Margaret deal with the hair pull. Looks like it will be a good ending to this rollercoaster of a season!