Home Real Housewives of Orange County News RHOC Star Kelly Dodd Claps Back at Fan Who Wonders Why She is Renting a Home Instead of Buying, Plus See PHOTOS of Her Fabulous New Walk-In Closet

RHOC Star Kelly Dodd Claps Back at Fan Who Wonders Why She is Renting a Home Instead of Buying, Plus See PHOTOS of Her Fabulous New Walk-In Closet

Kelly Dodd recently confirmed she’s renting a new home in Newport Beach, California for $10,000 a month, and shortly thereafter, she came under fire for failing to purchase a home for her family.

Amid production on The Real Housewives of Orange County season 15, Kelly explained why she chose to rent her six-bedroom, five-bathroom home instead of buying before addressing the possibility of filming her upcoming wedding to fiancé Rick Leventhal for the show and sharing photos of her new glamorous walk-in closet.

“It’s funny these two are supposed to be so rich and rent homes instead of owning one. Kelly’s rent is [$10,000] a month,” a fan wrote on Instagram after Kelly shared a photo of herself and RHOC co-star Shannon Beador, who rents a $12,000 a month home nearby.

“I can afford to buy a home my fiancé owns three,” Kelly replied.

According to Kelly, she doesn’t want to purchase a new home before she and Rick wed.

“I’m getting married and of course I’m not getting into buying a home. Why do you care and who said I’m rich? What does rich even mean? I’m rich in love,” she continued. 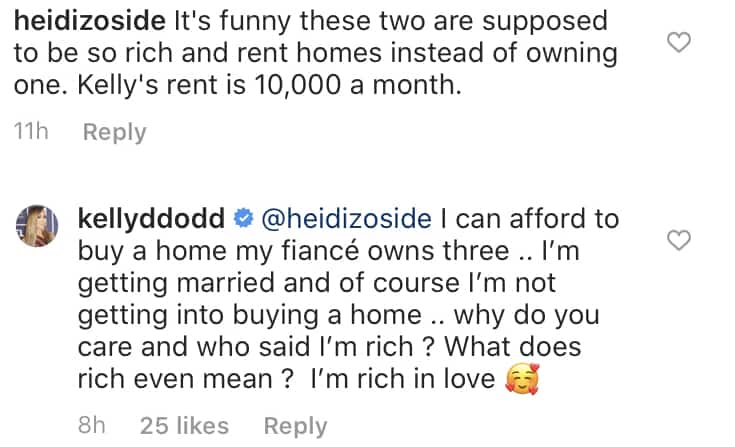 As for her upcoming wedding, Kelly wouldn’t confirm or deny whether the event would be filmed for an upcoming season of RHOC.

“Excited for new season! Will you have your wedding on the show or not allowed to say?” a fan asked.

Kelly and Rick got engaged last November after just three months of dating. As Real Housewives fans may know, the couple was introduced to one another by Real Housewives of New York City star Ramona Singer last summer after Kelly’s split from Dr. Brian Reagan.

And just yesterday, Kelly took to her Instagram page to share photos of her fabulous new walk-in closet! Those photos are below. You can swipe right to see all the pics.