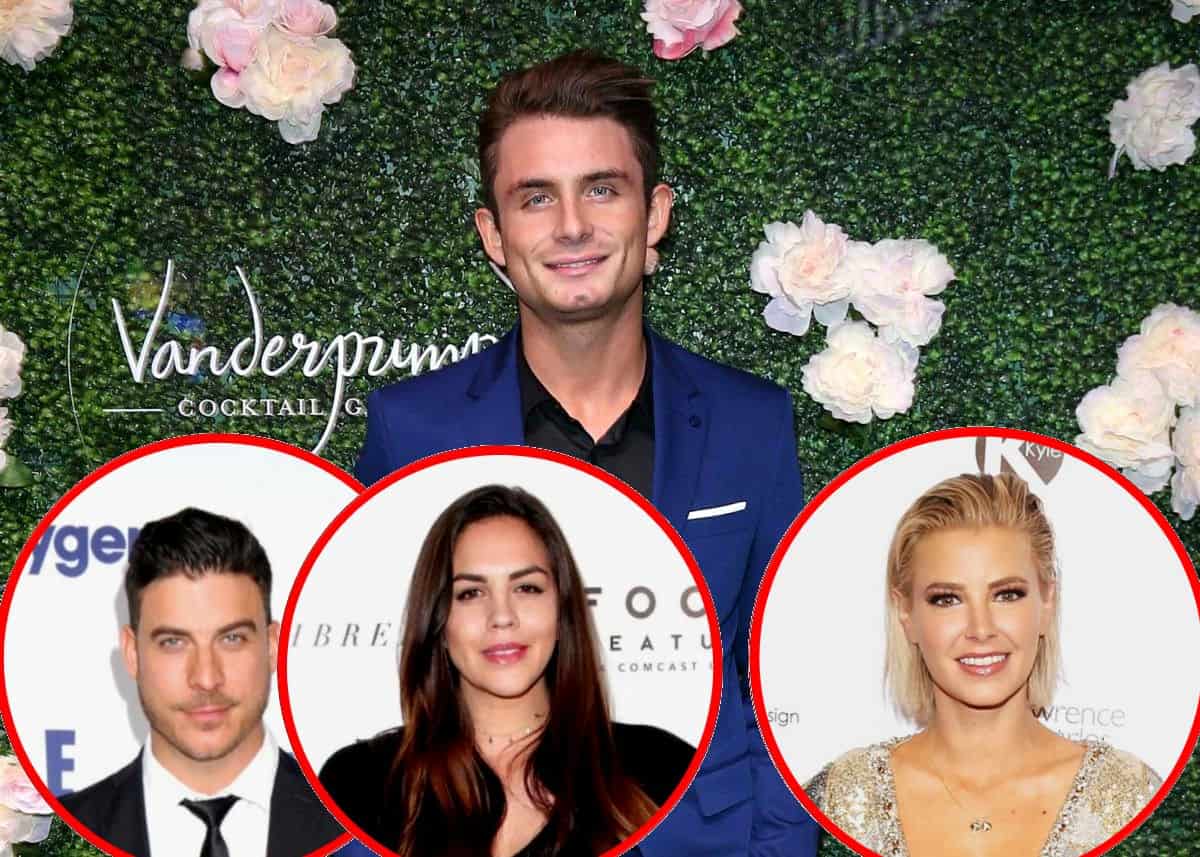 Vanderpump Rules star James Kennedy has a lot to say about his life shift and sobriety — and also about his co-stars.

The DJ first dished on where he stands with Katie Maloney and Jax Taylor these days. As Pump Rules fans know, the two haven’t always been fond of their castmate, with James taking aim at Katie’s weight during the L.A. Pride Festival in 2018 and once making Jax’s wife Brittany Cartwright cry. However, we’ve seen recently how Katie has come around and how Jax affirmed James’ newfound sobriety and peace with his co-star.

“I think Katie and Jax have seen a difference in just the way I carry myself, the way I act, the things I have to say,” James explained on The Daily Dish podcast. “I’m still the funny, charismatic James, just not with a side of d—-bag, you know what I mean?”

The reality star explained how he loves “being in a good place” with both Katie and Jax and regrets a lot of the things he said to them. He added that when he and Jax are on good terms, they’re “f—king gold together” and that he is “really happy they have seen the difference” in him.

Even so, James isn’t on perhaps the best terms with all his fellow cast members, touching on how ex Kristen Doute might not be the happiest for him.

“I know that she doesn’t like me and she thinks it’s all fake. But I think it’s because she’s suffering in her own life right now with her own relationship,” James shared. “Obviously she sees me and my relationships or my life or my workplace getting better — she probably doesn’t like it… As long as she stays clear out of my way I’ll stay clear out of hers.”

James also noted how he’s “trying to stay as far away from Kristen as possible” this season and called her “a bit of a wreck.” He’s, well, not the only one who thinks so.

James then talked about his relationship with close pals Tom Sandoval and Ariana Madix, noting how close they’ve grown and how much he respects them — perhaps shading Jax’s nasty comments on the two.

James explained how Tom and Jax’s relationship is “a little bit deeper” than his and Tom’s, so he and Jax “can really say things to each other that I would never really say to Tom.”

Even so, the self-proclaimed “White Kanye” calls Jax’s comments on Ariana’s sexuality, during which Jax implied the reason Ariana didn’t want to get married to Tom was because she prefers women, “a little bit disrespectful.”

“If I’m not mistaken,” added James, “wasn’t there things going on between Kristen and Brittany? So it’s just all … it’s all a bit silly to me, I don’t understand why he said that.”

The reality star also shared news about his projects, including the release of a new track “Playboy Bunny” with BFF and Pump Rules co-star Lala Kent that dropped on March 27.

Shannon Beador Fires Back at Tamra Judge’s ‘Alcoholic’ Claim Against Her, Denies Braunwyn Got a ‘Bad Edit’ on RHOC and Says a ‘Normal” Woma...

RHOC Star Elizabeth Vargas Suggests Braunwyn’s Not Sober Despite Not Drinking, Reveals Why Her Co-Star’s Behavior Was Painful To Watch And Teases “Odd&...

RHOC’s Kelly Dodd Accuses Sean Burke Of Snooping On Her Twitter Page As Photographer Says Images Of Braunwyn Are “Never” In Demand Following Claims Of Being ...

PHOTO: Porsha Williams’ Sister Lauren Shares Picture of Her Mom as Porsha Blasts Trolls For Messing With Her Family, RHOA Star Claims “She Has IdeaR...

VIDEO: Watch RHONJ Season 11 Trailer! Melissa is Accused of Texting Another Man as Jennifer is Called Out on Her Drinking, Plus Joe Gorga Suggests Joe Giudice Put His Mother in Her Grave as Jackie ...