Kyle Richards Shares Tweet After RHOBH’s Season High Ratings Following Latest Episode and Responds to Claims That She Put Her Name on Someone Else’s Designs for Clothing Line, Plus Live Viewing Thread!

by Lindsay Cronin May 13, 2020 332 comments
ShareTweetWhatsappPinterestRedditTumblrMailFlipboard 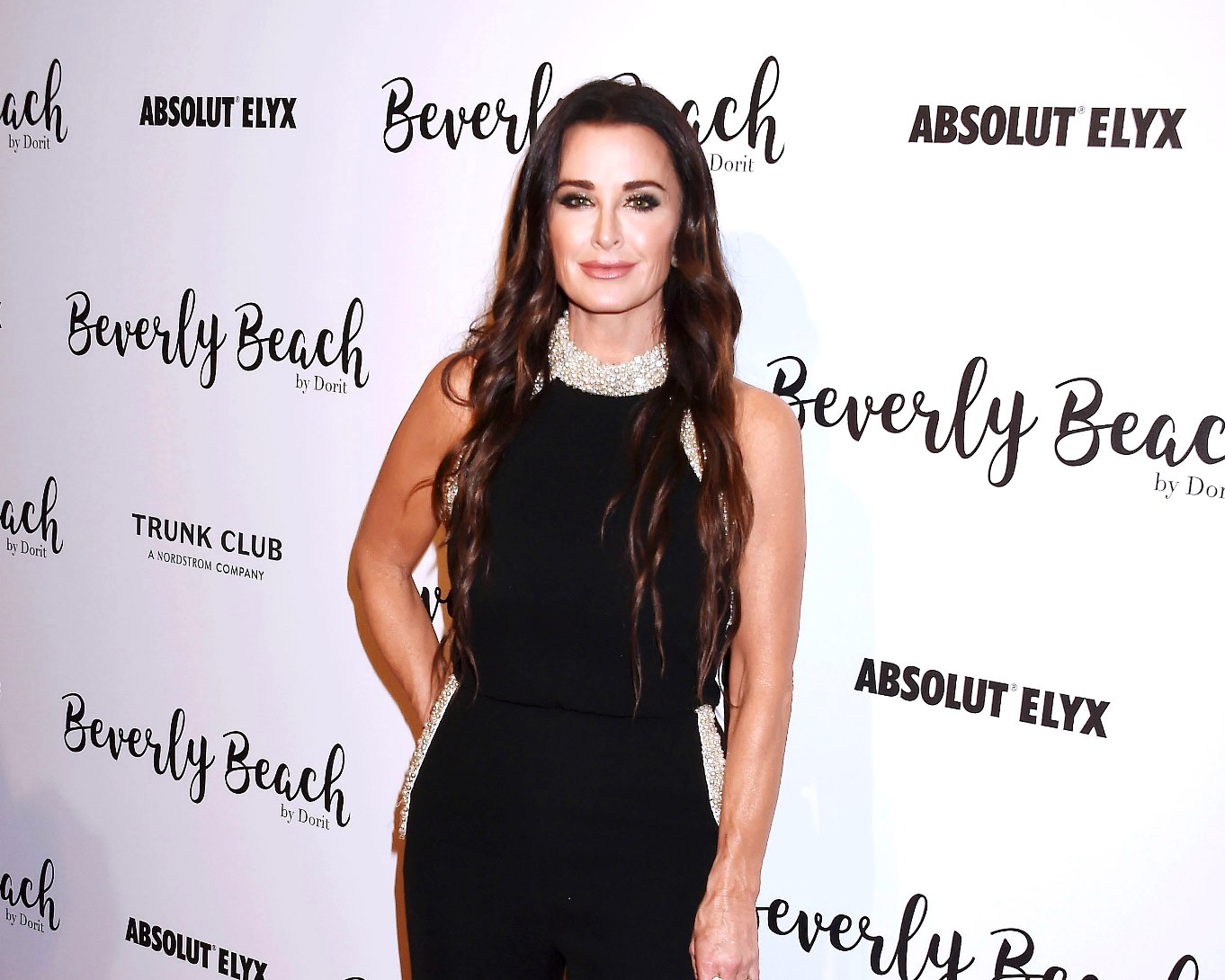 Kyle Richards seems to be thrilled that ratings on The Real Housewives of Beverly Hills‘ 10th season are climbing.

After it was revealed that the season’s fourth episode last week scored nearly 300,000 more viewers than the premiere episode weeks prior, Kyle shared the news with her audience on Twitter, via re-tweet, while also shooting down rumors that she simply slapped her name on the designs of Shahida Clayton for their clothing line, Kyle + Shahida.

In Kyle’s post, which was shared from Bravo Ratings on Twitter, it was revealed that last Wednesday’s episode hit a season high with 1.638 million viewers in ratings. 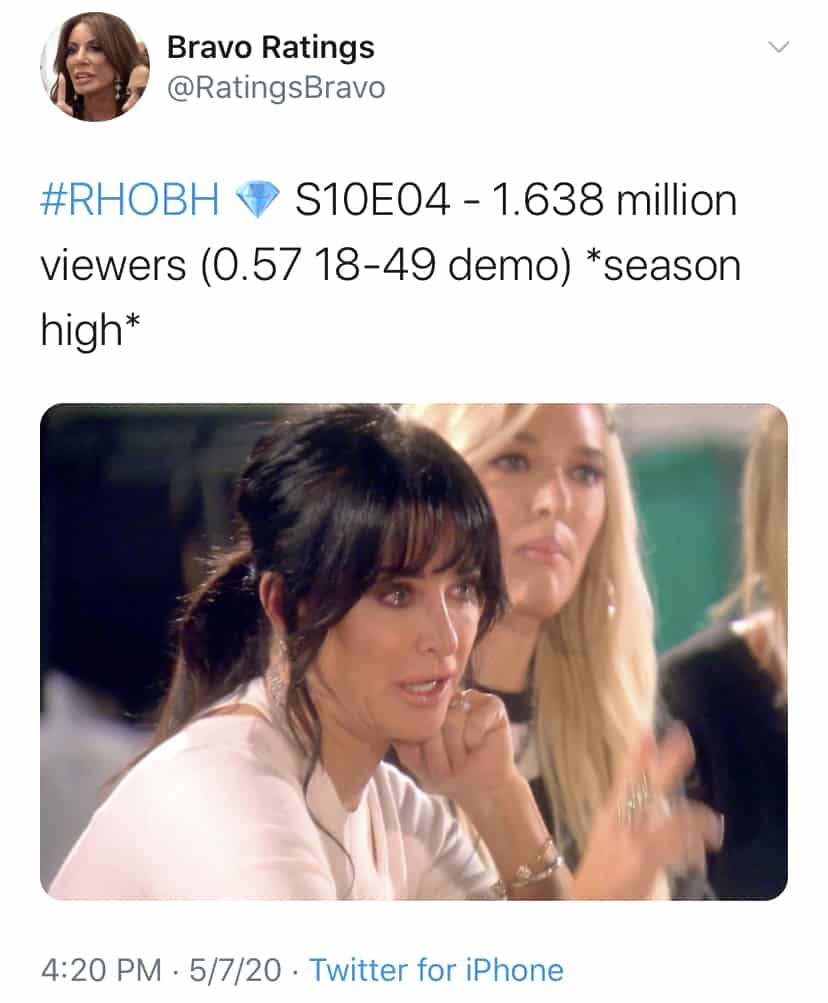 When RHOBH premiered last month, the debut episode of the first season without Lisa Vanderpump scored just 1.35 million viewers, which was fairly alarming due to the fact that the show had never premiered to such low numbers.

Luckily, after a similar outcome for episode two, the ratings began to climb. Episode three brought in an additional 170,000 viewers for a total of 1.52 million, and episode four went up by 120,000 for its latest total of 1.64 million.

In addition to season 10, episode four scoring the highest number of viewers of the season, it also topped the night in cable telecasts, according to Showbuzz Daily.

In another post, Kyle reacted to a conversation between Twitter users who were chatting about the drama surrounding her clothing line, which Dorit Kemsley suggested was designed by Shahida but claimed by Kyle on the show weeks ago.

After a couple of fans suggested Kyle couldn’t possibly have her own line after the closing of her boutique and said she “knew nothing” about the clothes at her fashion show, another one of Kyle’s followers came to her defense.

“Umm she did know what ‘Her’ designs were and if you watched her on WWHL you’d know that. There were other designs mixed in that weren’t hers that she pulled out. And have you ever heard of editing,” the fan wondered. 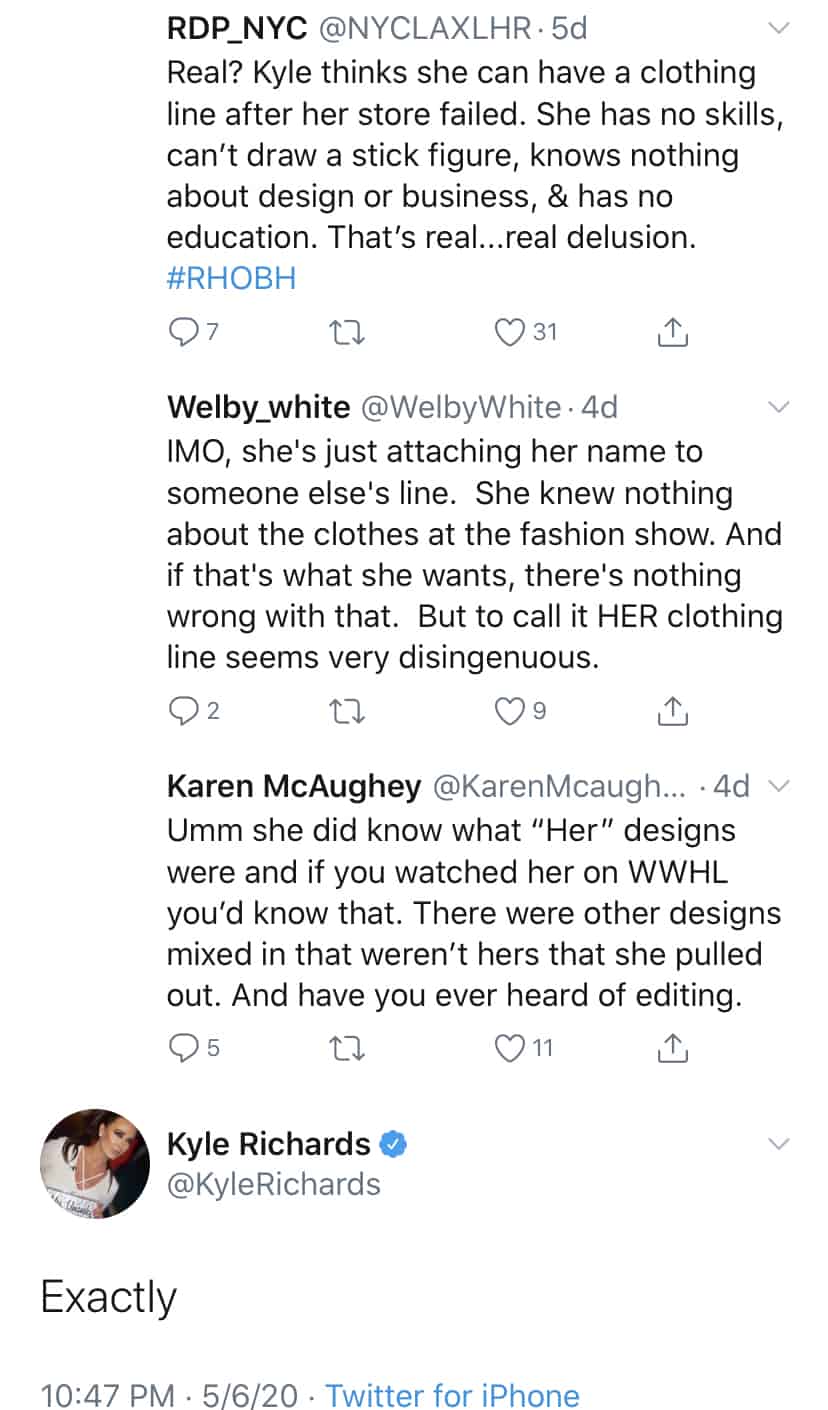