by Elizabeth May 18, 2020 59 comments
ShareTweetWhatsappPinterestRedditTumblrMailFlipboard 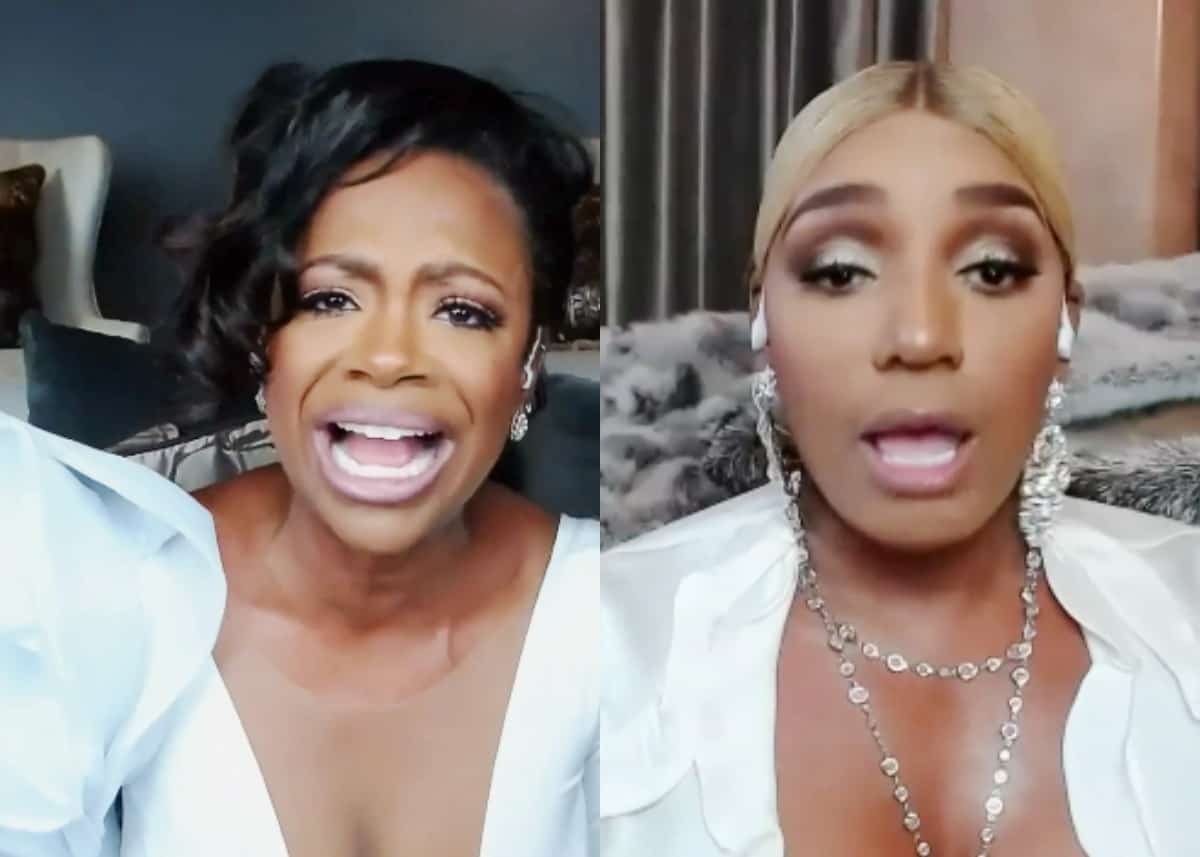 On Part 2 of the Real Housewives of Atlanta reunion, the ladies are back to re-hash this hot-mess of a season. Will Porsha really have the receipts on Kenya? We will have to wait and see…

Still, Kenya is being super shady with Cynthia. Cynthia decides to take one for the team by accepting they all can dish out the shade. Cynthia and Nene’s relationship is even questioned, again. Move on, ladies.

We then re-hash the season of the babies! Can we get one collective awe for this part of the season?  There were some beautiful little ones born this season. It is ironic that even Andy Cohen experienced baby fever too.

Cynthia is shacking up in LA with Mike, Noelle, and her girlfriend Alexis. She is happy Noelle is content in her new relationship. Good for them and hopefully she is also picking a coast to finally settle on. They also discuss how Mike spoke inappropriately in front of his daughter. Cynthia claims everything is peachy despite the fact that the young girl left the room sobbing.

Marlo shares she has been raising her nephews for the last year. The other ladies discuss how much happier Marlo is mothering these two boys. Her shopping has even slowed down with her commitment to those two boys.

Porsha shares that her mom said she smirked just like PJ does. I cracked up each time I saw PJ’s no-nonsense faces throughout this season. She does seem to take offense to anyone suggesting PJ looks like anyone else but her. Get over it, Porsha, just enjoy your baby! Ignore the haters!

Porsha and Kenya discuss how motherhood changed them for the moment. Well, that didn’t last for long!

Kenya discusses how her hairline was dissed this season. Porsha slyly says in her ITMs that Kenya is really shopping online for some Go-Naked hair. It is clear Porsha is still smarting over the whole doggy-style comment about Dennis… but weirdly enough, she doesn’t call out Nene, who also made similar jokes about Dennis.

The whole Shamea labor story is re-hashed. Porsha claims Kenya has no relationship with Shamea post-show. Kenya posted the receipts but they seem to have no validity again. Porsha thinks Kenya’s receipts should be in the shredder since they are useless.

Kenya’s season-long shady acts are shared. IMO, the cookie lady was the nastiest. Cynthia is the only one who found the shade at Marlo’s wig event funny. One thing that explains a lot, at least to me, is that Kenya can’t get over what Marlo said. Marlo pushed a GIANT spiteful button with Kenya when she said even her mom didn’t want her.

Kenya’s marching band at Marlo’s event is shown and how uncalled for it was. Kenya would never tolerate anyone going after her business but everyone else is open game? #Hypocrite

Nene gets thrown into this mud pit. Kenya calls Nene the ugliest bit** on the show. Nene thinks men are using social distancing as an excuse to stay away from Kenya. I am sorry but that is a little funny.

Kenya also calls Marlo a professional clown. Marlo actually does have a good point shading Kenya’s product launch. Who would put water in their product bottle at their hair event? Can you say a FRAUD?

Kenya actually regrets calling Tanya a cu*t. I don’t believe that for one minute. You actually have to have a conscience to regret something and I think Kenya is lacking that. As the church and Marlo say, Amen, she at least pseudo apologized.

When confronted with the cookie lady, the Queen of Diversion has to shift the narrative. The topic of Gregg allegedly cheating on Nene with the “help” is tossed into the pile of steaming shade. Nene questions Marc’s life in NYC. Kenya ACTS like she doesn’t care that Marc is playing around on her since she is separated. I call bullsh** on that one! But Nene might want to focus on her own marital drama before butting into Kenya’s.

Tanya thinks Kenya’s act was premeditated. Yep, me too, that is some first-degree shade! She also thinks Kenya shot an unloaded gun with the whole cookie lady spectacle. Kenya admits she sat on the information and so did Cynthia and Kandi. Kenya is so unremorseful and comes across really ugly when she AGAIN turns the table and says if you and Paul were so happy the cookie lady wouldn’t have made her bat a long eyelash.

Even Eva gets in trouble since she ate way too many cookies. She was a hungry pregnant woman for goodness’ sake! Cut her some slack!

Kenya says she wears wigs to protect her 24 inches of natural hair. Who even knows the exact measurement of their natural hair? Tanya gives Eva crap over eating too many of the cookie lady’s cookies . Cynthia admits even Kenya went too low with Tanya over the cookie lady.

Kandi and her lack of an opinion on Paul cheating is being made a thing. Porsha took it as she didn’t give a f**k. Kandi didn’t want to involve herself in that messy situation since she was too busy signing contracts with The Masked Singer #priorities! She doesn’t have a close relationship with Tanya and didn’t want to get involved in that messy drama.

Kandi gets a question about her connection to Blaze. She says there is no difference between her and the other children. She mentions that Andy can relate. Kayla and Todd are doing better. Kandi says Mama Joyce and Todd have also been co-existing since Blaze was born. It sounds like the baby has mended some things in the relationship.

It seems like the only thing upsetting Mama Joyce now is the perception that she is using her daughter as a cash register. Porsha thinks Mama Joyce would go to war over Kandi. Yes, she would go down for her daughter but I can guarantee that lunchbox would be loaded with lots of cash and no one would rip it out of her hands!

Eva’s scenes are shown where Marley’s name was changed. She was actually sued by the sperm donor over it. He wanted the name changed back and child support.  Eva admits it started out as a very casual relationship but became extremely abusive. She wouldn’t change it since Marley is such a blessing. I think a lot of us can relate to getting something amazing even out of a bad relationship.

Eva tears up and needs a moment. She would rather fight with these women over discussing this POS. I get it. That sounded like a very painful chapter of her life. I am glad she found Mike Sterling, who has been a good husband and father.

Andy compares her strength to Kenya’s when she was in an abusive relationship. Kenya asks to leave the call and check-in with Eva.

We then go through the drama with Dennis. Porsha found some nasty texts on his phone. All of the counseling sessions are replayed and how he really isn’t held accountable. The countless clubbing stories with Dennis — she just kind of glosses over it.

Porsha claims she is in quarantine with Dennis and her mom. Porsha has become numb to the cheating rumors. I don’t know what new mom would be okay with their man out clubbing at 4 a.m.? With multiple women at that? I don’t get these women always saying we are in a different place all the time. What does that even mean — are they not living in the same house so things are tolerable?  Kandi decides to remain silent about her thoughts on Dennis. Smart woman — she won’t touch that one with a ten-foot pole.

Eva returns to the call after composing herself. She has a hard time reliving the donor story. It is too painful for her.

Nene shifts the narrative to herself by saying it is okay to shade everyone else. Get your smoke somewhere else, Ms. Burruss. Learn from the lunchbox! Is she having a psychotic break? These comments make no sense!

Kandi wishes Nene would go find a really large lunchbox and hide inside it. There is a giant green-eyed dragon spewing nasty comments !

They show Nene’s own personal YouTube channel where she is obviously the green-eyed monster over Kandi and all of her side gigs. Wait till she finds out she could be on The Masked Singer? It gets so ugly and loud that Andy has to mute Kandi and Nene. I need to be a better lip reader since they didn’t even seem to notice they were muted!

Nene CLAIMS she has never been interested in Kandi and thinks she is boring. She also tells Eva to lick bottom. What does that even mean? Yuck. Nene is pissed she is no longer the big peach on this show and she is consumed with jealousy.

Andy needs to keep Nene on permanent mute. Nene can’t accept that Bravo keeps gifting Kandi more shows. It is either her or Kim Zolciak. KANDI, EVERY DAY OF THE WEEK FOR ME!

Kenya actually thinks she is the only friend Cynthia has. Sister Cynthia, you can do so much better than that! Kenya is her ride or die friend? Now, that is a tough choice with Kenya as that person!  The whole proposal thing and the wine shade is brought up. Cynthia is content to go down with no self-worth holding on to that peach for dear life!

Nene is just chattering to herself calling the other women a bunch of haters. She thinks there wouldn’t be a show without her. She then shuts her camera down. Andy, please don’t try to get her back! Bye, Wig! Run away from this hot kitchen frying up your evil misdeeds!  Nay Nay is down for the count! Amen to that!

Next week, we get to meet baby Ben, and Yovanna is back! Nene, the coward, isn’t there to defend herself? Take care, everyone, and have a good week!