Home Vanderpump Rules Rachel O’Brien Talks Distancing Herself From Stassi After “Nazi Chic” Photo, Plus How Stassi’s Mom Dayna Schroeder is Working to Get Her Rehired on Vanderpump Rules as Fans Start Petition

Rachel O’Brien Talks Distancing Herself From Stassi After “Nazi Chic” Photo, Plus How Stassi’s Mom Dayna Schroeder is Working to Get Her Rehired on Vanderpump Rules as Fans Start Petition

Stassi Schroeder‘s former friend Rachel O’Brien is speaking out about how she disagreed with her controversial photo as mom Dayna Schroeder is rallying fans to get Stassi back on Vanderpump Rules.

Rachel, who used to be better friends with Stassi, is pointing out how Stassi’s infamous photo from 2018, in which she described Rachel’s look as “Criminal Chic,” Kristen Doute as “Tupac Chic,” and her outfit as “Nazi Chic,” was not her idea and that she actually pleaded for Stassi to not use the caption. 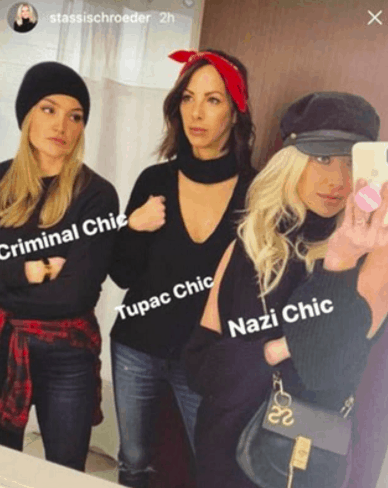 Stassi quickly deleted the photo after it was taken, but fans are now resharing screenshots of it after former Pump Rules cast member Faith Stowers revealed racially insensitive actions from Stassi and Kristen, resulting in the firing of the two OG cast members.

“A little over two years ago I was with friends and took a picture. I saw the way it was being captioned by her and begged for it not to be captioned that way and thus posted,” Rachel told Page Six on June 10. “My attempt for her to understand the severity of her caption went dismissed. That request was not honored, and I have been upset ever since. It was not then, nor has it ever been a reflection of my own value system. I am grateful to not be associated with her anymore. Our personalities and hearts are not the same.”

Stassi faced backlash for the photo at the time, but she is currently taking a lot more heat since Faith spoke out. She has lost her representation, a number of sponsorships, and even her bridal column with Glamour magazine.

Now, Stassi’s mother, Dayna, is fighting on behalf of her daughter, urging fans to campaign for Bravo to rehire the former reality star.

On June 9, Dayna directed a fan to an Instagram account @standupandsupportstassi (unclear who runs the page), which also has a petition in the bio link to bring back Stassi and Kristen to the show. The account also rallies fans to contact Metro Public Relations, Stassi’s former representation, to re-think their decision to drop her as a client.

“We believe in love and forgiveness,” one of the account’s posts reads. “We do not take pleasure in the pain of others. We do not believe the punishments fits the crime against Stassi Schroeder. We have all made mistakes. We are all capable of learning and growing from our mistakes. When is enough enough? Why is Stassi not being given the opportunity to speak from her heart?… We believe and are willing to Stand Up & Support Stassi!”