Brittany Cartwright Asks for Prayers as Mom Remains in ICU, Plus Jax Taylor is Reportedly on the Chopping Block Amid Vanderpump Rules Firings 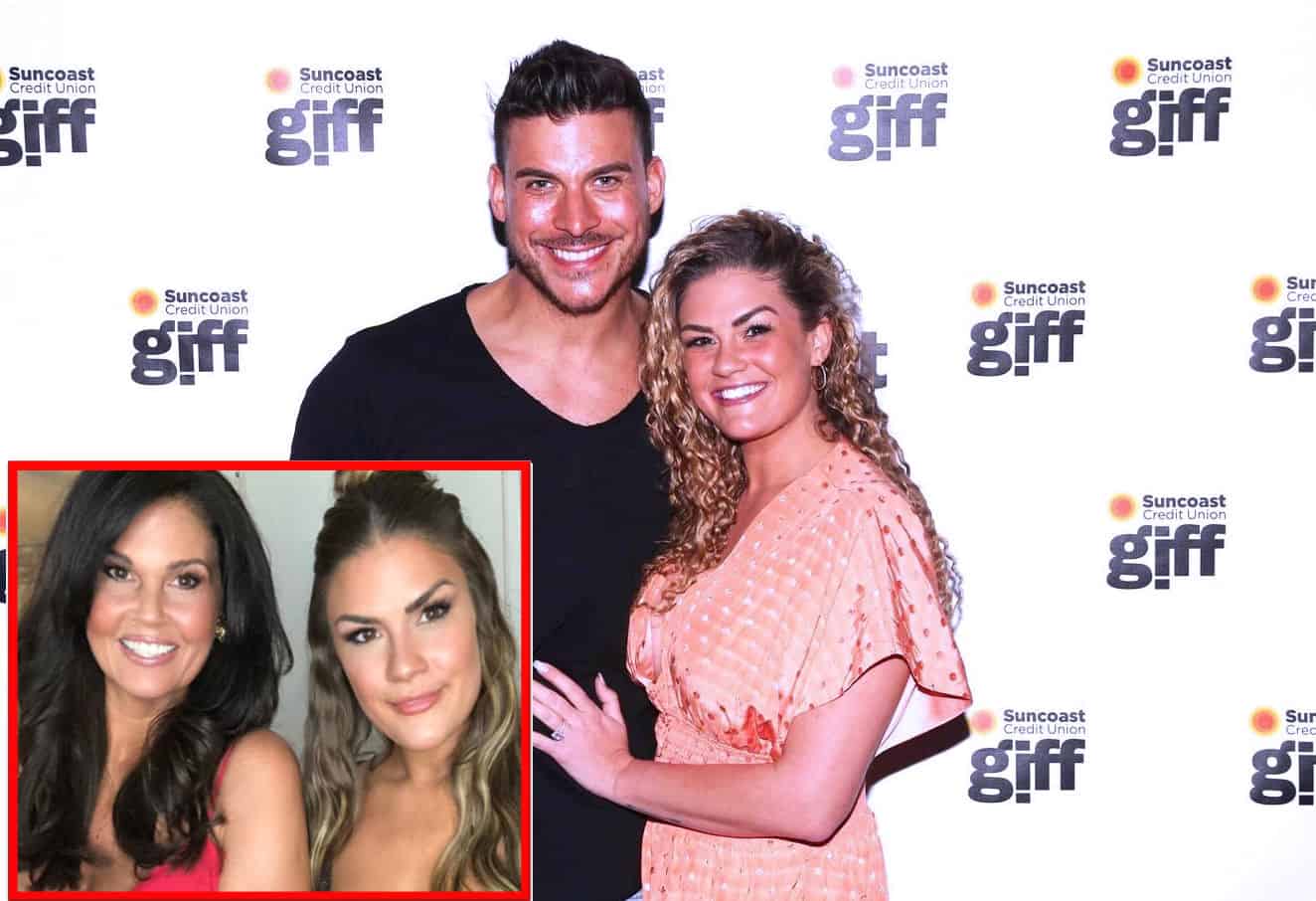 Brittany Cartwright‘s mom, Sherri Cartwright, is in the ICU after undergoing a number of surgeries earlier this month.

As requests for prayers continue to pour in from the likes of the Vanderpump Rules star and her Kentucky pastor, Ryan Dotson, Jax Taylor is said to be “on the chopping block” with Bravo due to the offensive behavior he’s exhibited in the past.

“I would like to ask all my friends to please pray for my friend and church member Sherri Turner Cartwright,” Pastor Ryan wrote in a post shared on Facebook on June 10. “She had to have an emergency surgery after having a scheduled procedure that went bad. She’s in ICU and things are uncertain, so please join us in prayer for Sherri and believe God for her full recovery. Thank you.”

Days later, on June 12, Brittany requested prayers for her mom on her Instagram Stories.

“Please keep my beautiful mom in your prayers,” she wrote, along with a red heart emoji. 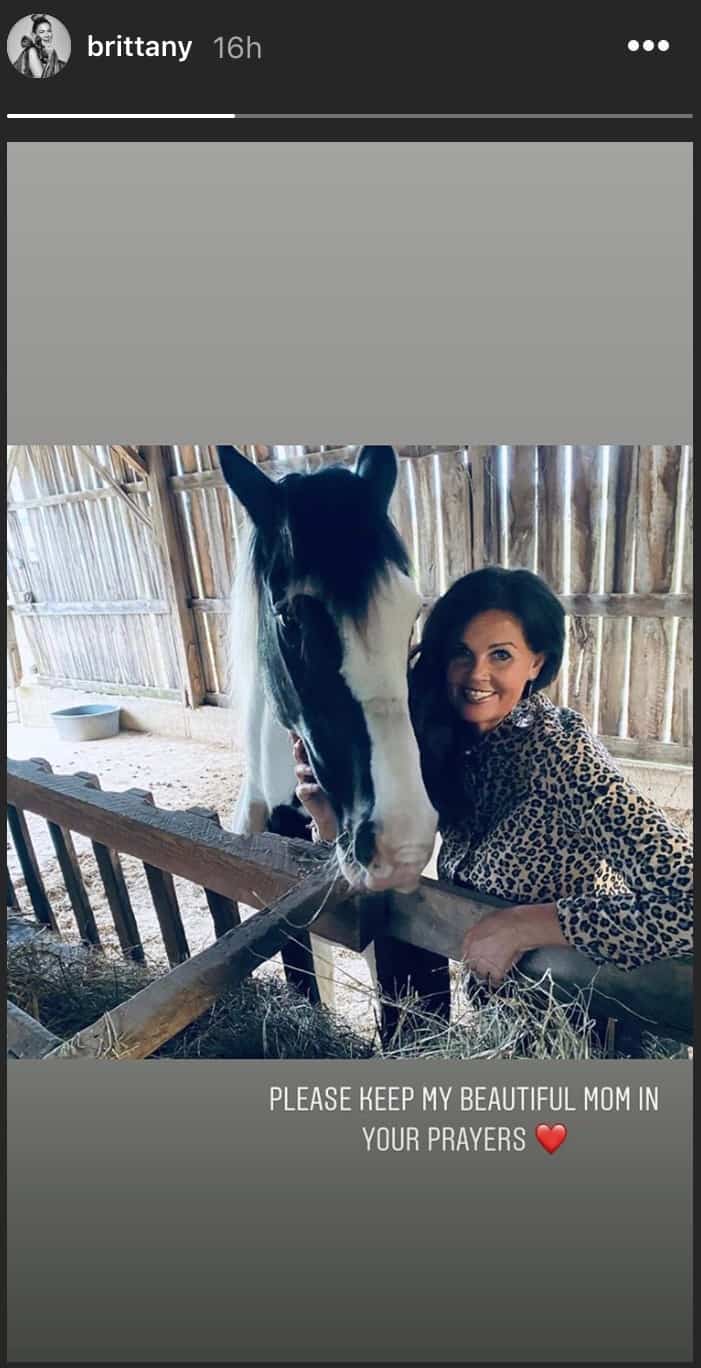 Prior to the recent news regarding her stay in the ICU, Sherri revealed on her Facebook page that she was set to undergo bladder surgery.

“Say a little prayer for me tonight. They changed my bladder surgery for tomorrow morning,” she wrote.

“Thinking about you [Sherri Cartwright] we can’t wait to see you,” he shared.

“I’m having a rough time,” she replied. “I’m have to have another surgery after one.”

Then, after seeing the conversation, Katie Maloney‘s mom, Teri, weighed in.

“You have been in my thoughts and prayers everyday Sherri.” 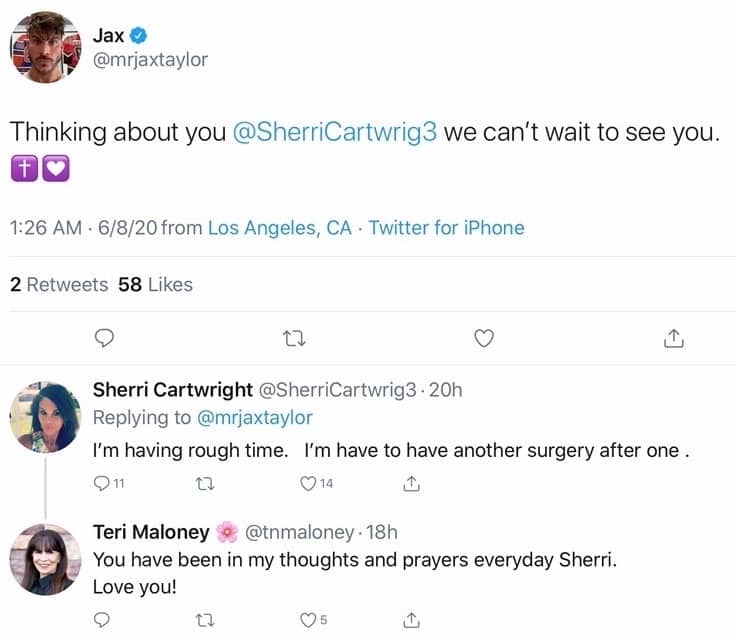 As for why Jax may be following in the footsteps of his fired Pump Rules co-stars, including Stassi Schroeder, Kristen Doute, Max Boyens, and Brett Caprioni, a source claims Bravo is currently dealing with a major wake-up call when it comes to its stars’ behavior,  and there might still be another firing on the horizon.

“[Jax] has been a loose wire since the show’s inception, but even [Lisa Vanderpump] is worried,” the insider told In Touch Weekly on June 12. “Bravo, like other networks, was known for encouraging bad behavior from their stars and now they have to look at everything with new eyes. It’s a wake-up call [for everyone].”

The source insists Jax is “on the chopping block.”

On Instagram this week, 90 Day Fiancé star Ashley Martson reminded her fans and followers of a comment Jax left on her page months ago about her husband, Jay Smith, in which he said, “Your man’s nose is the size of his head.”

Brittany may also be in jeopardy after she allegedly called Faith Stowers “nappy-headed,” which she denies.