Kristen Doute’s Boyfriend Alex Menache Speaks on Her Firing From Vanderpump Rules, Says She’s Been ‘Put Through the Ringer’ as Kristen Posts About a “New Beginning” 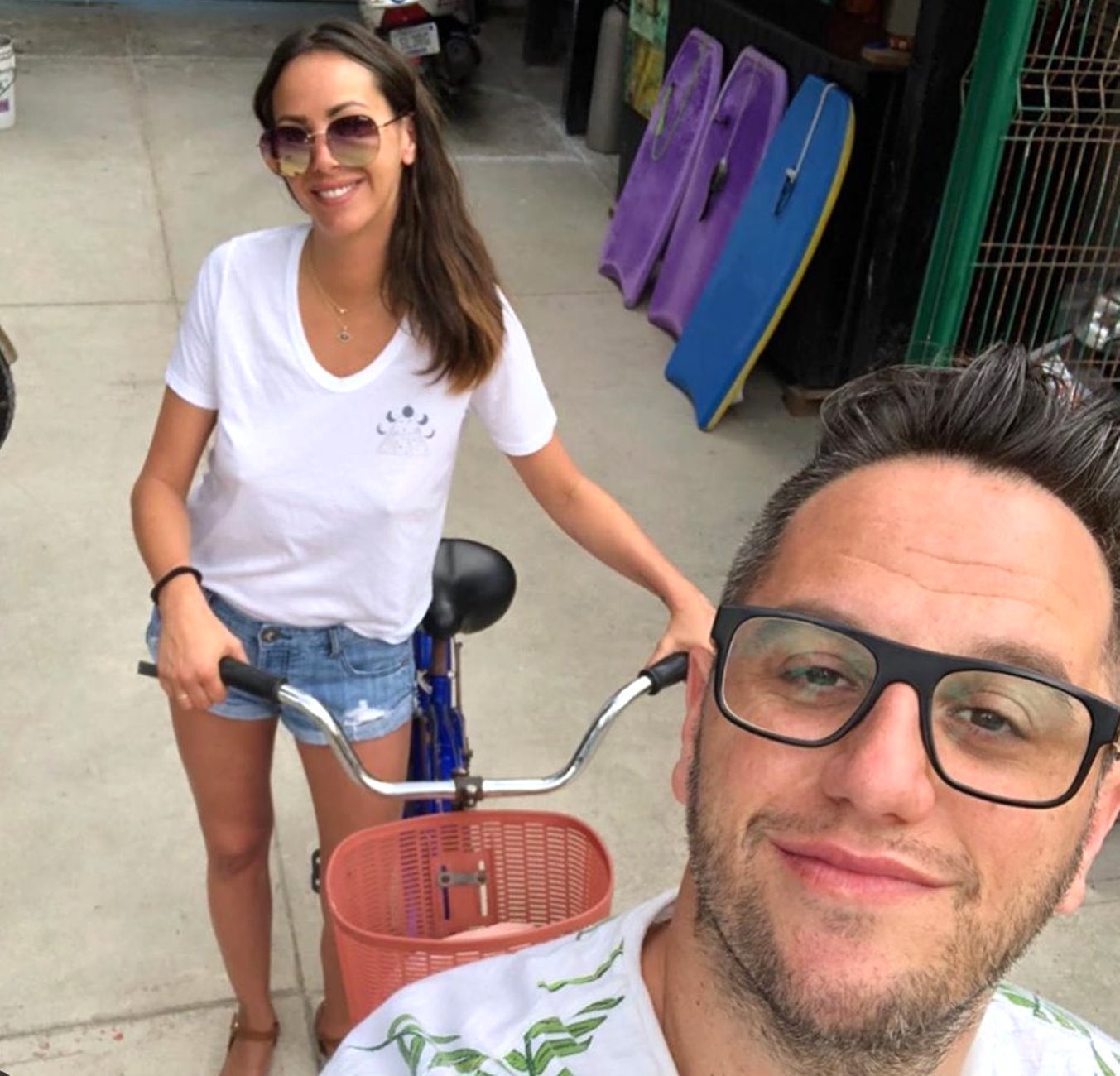 Kristen Doute‘s boyfriend, Alex Menache, shared an emotional statement about her firing from Vanderpump Rules on his Instagram page on Tuesday night.

After Kristen shared a telling meme about being “teachable” following her exit from the Bravo show, which came amid allegations of racist behavior, Alex told his followers that Kristen was taking the firing “like a champ” and was dealing with her unexpected departure with “grace and strength.”

“This woman has been put thru [sic] the ringer these last few weeks and has taken it like a champ,” Alex wrote, along with a photo of him giving Kristen a kiss on her cheek. “Anyone that knows you knows your heart is pure and kind. She has dealt with it with grace and strength, and is putting in the work behind the scenes.”

“I honor you [Kristen] and will always be your #1 big idiot fan!” he added. 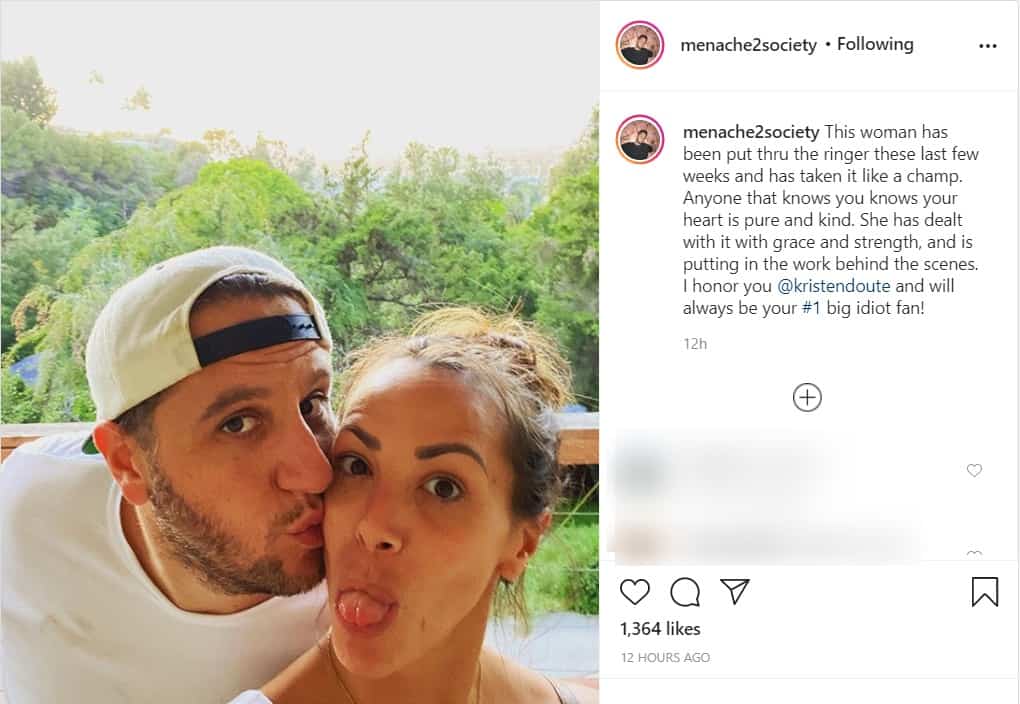 In April, during an interview with Entertainment Tonight, Kristen revealed she and Alex were having a “really great time” getting to know one another.

“He is a great guy, taking it slow, just having fun,” she said.

It read, “Be humble. Be teachable. The world is bigger than your view of the world. There’s always room for a new idea, a new step… a new beginning.”

Then, in the caption of her meme, which she also shared on her two accounts, Kristen admitted that she has been close-minded about the state of the world in the past.

“The world is bigger than your view of the world’ is something that really hit home for me because it’s something I’ve been guilty of,” Kristen told her online audience members. “Thankful for everyone in my life that has taken the time to speak, teach and allow me to listen.” 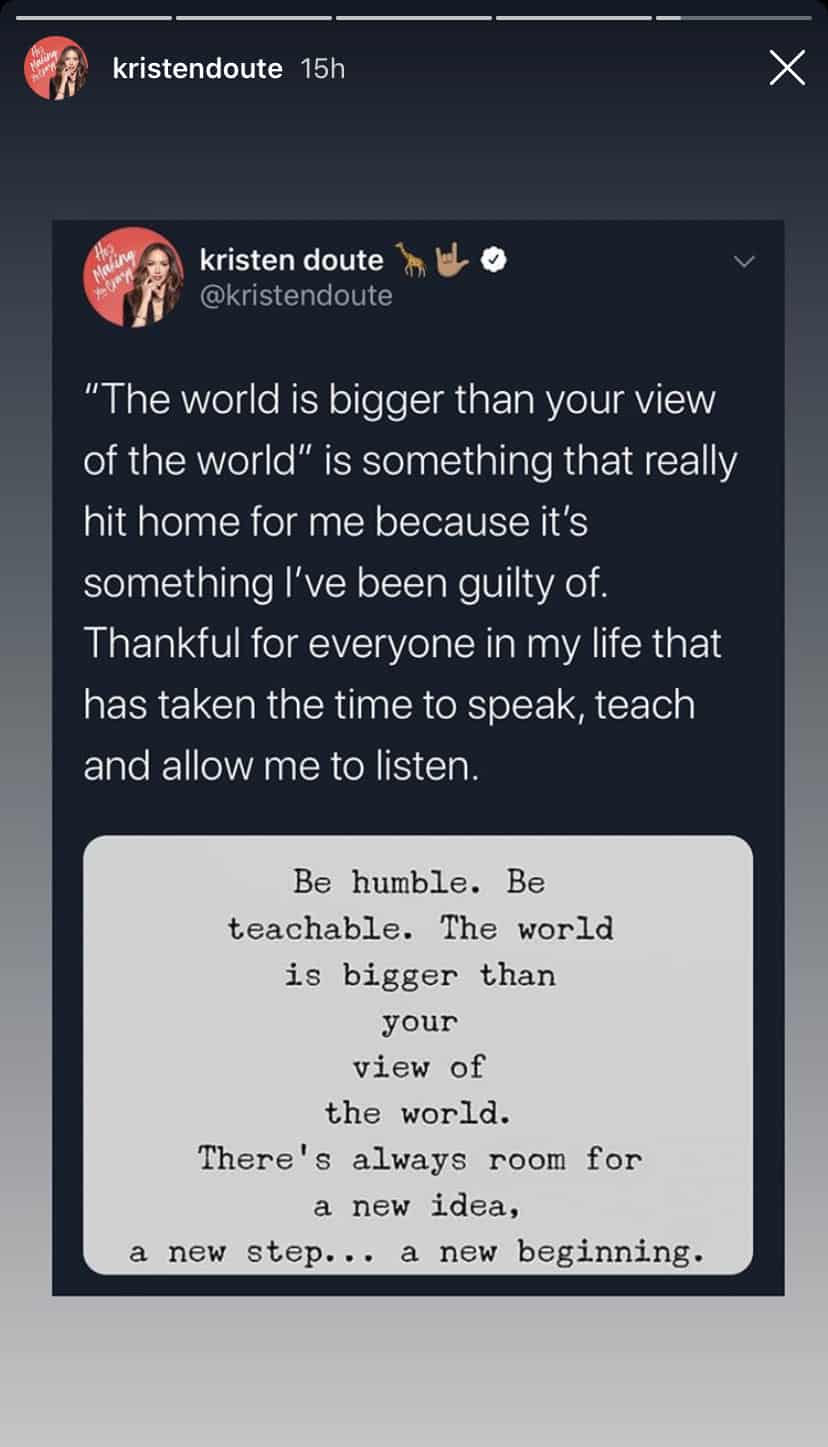 Kristen was fired from Pump Rules in June, along with Stassi Schroeder, Max Boyens, and Brett Caprioni, after Faith Stowers revealed she called the cops on her in an attempt to have her arrested for crimes she didn’t commit.