Home Real Housewives of New York City News RHONY Ratings Plummet After 2-Week Hiatus as Show Records its Lowest Rated Episode Since the Season 7 Reunion, Is the Pandemic to Blame?

RHONY Ratings Plummet After 2-Week Hiatus as Show Records its Lowest Rated Episode Since the Season 7 Reunion, Is the Pandemic to Blame?

The Real Housewives of New York City season 12 has been on a downward slope in its ratings since May, and last week, the series’ July 2 episode recorded its lowest rated episode since the season seven reunion in 2015.

According to a new report, the latest episode of the show brought in less than 1 million viewers, which was 300,000 less than it got during its June 11 episode that aired as the last episode of the Bravo reality series prior to the show’s two-week hiatus.

“The Real Housewives of New York City has just recorded its lowest rated episode since season 7! Thursday’s RHONY episode was only viewed by 0.88 million people, down from 1.18 million from the previous episode,” the Real Housewives Franchise on Instagram revealed on July 7. 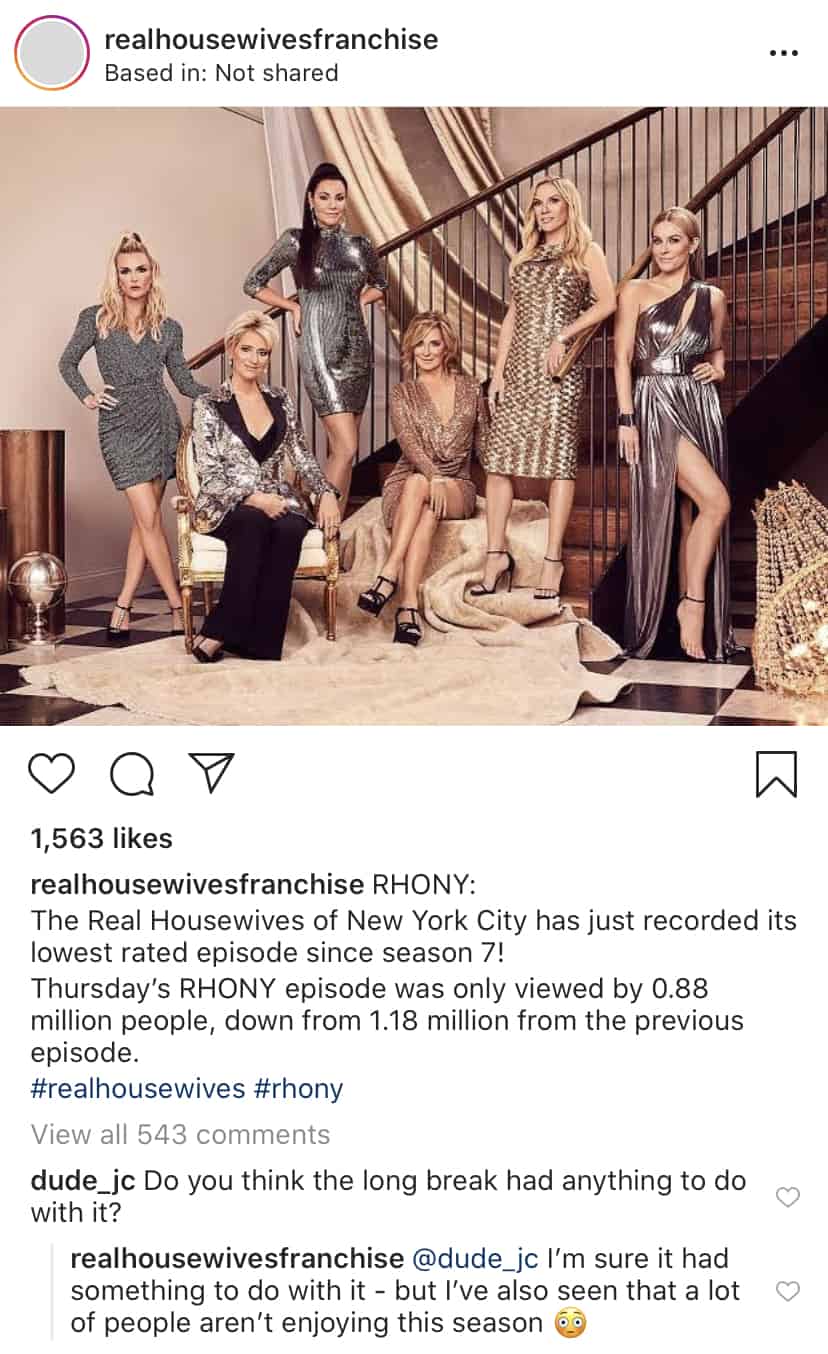 In the comments section of the reveal, the Real Housewives Franchise was met with a fan who wondered if the two-week break the series was forced into due to production delays caused by the coronavirus pandemic was to blame for the show’s low ratings.

“Do you think the long break had anything to do with it?” the person asked.

“I’m sure it had something to do with it,” the fan page replied. “But I’ve also seen that a lot of people aren’t enjoying this season.”

This was also the first episode without Tinsley Mortimer, who quit the series following her engagement midway through filming for the season.

While part three of the RHONY season seven reunion brought in just 0.84 million viewers back in 2015, the series hasn’t seen such low numbers on any of their regular season episodes for over a decade. In fact, the show has not seen less than 1 million viewers since before the third season in 2009. It actually premiered to just a bit less than last week’s episode with season one, episode one garnering 0.82 million viewers.

Bethenny Frankel quit her role on the show in August of last year and shaded the series months later for failing to bring in viewers and suggesting their dwindling audience was the result of their storylines being uninspiring.

“Perhaps the ratings on Real Housewives aren’t doing well because it’s sort of not maybe the content that is inspiring people to do what they need to do right now,” she told Extra TV. “Or maybe they want to watch the news or something uplifting.”