Home Real Housewives of Beverly Hills News Camille Grammer Accuses Erika Jayne of ‘Yelling at Crew and Producers’ of RHOBH For Unflattering Scenes, Calls Her Out for Bad Behavior and Agrees With Claims She ‘Talked Down’ to People

Camille Grammer Accuses Erika Jayne of ‘Yelling at Crew and Producers’ of RHOBH For Unflattering Scenes, Calls Her Out for Bad Behavior and Agrees With Claims She ‘Talked Down’ to People 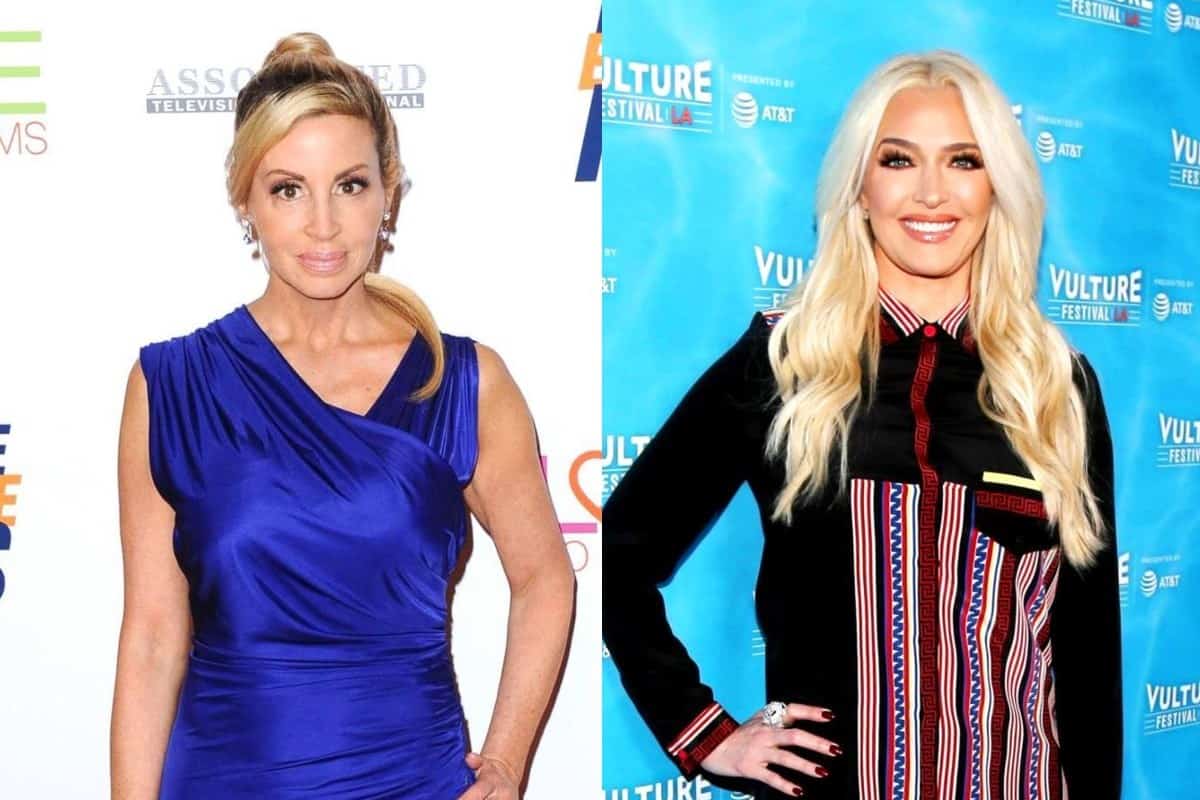 Camille Grammer isn’t afraid to speak her truth regarding her thoughts about The Real Housewives of Beverly Hills!

Just yesterday, Camille called out the “mean girls” of Beverly Hills, feuding with her former co-star, Kyle Richards, on Twitter and labeling the RHOBH cast as “awful humans.”

Now, Camille is gunning for Erika Jayne by responding to pejorative comments made by former diamond-holder Kathryn Edwards about the “XX$PENSIVE” singer.

Camille responded to a fan who tweeted out the recent story from Kathryn, regarding the ex-RHOBH star’s recent podcast appearance, claiming Erika “talked down to people” and that she wasn’t a “caring person.”

“She does … I have witnessed it myself,” Camille said. “If a scene doesn’t suit her, she yells at the crew and producers. It doesn’t happen all the time but she did this in the Bahamas.” 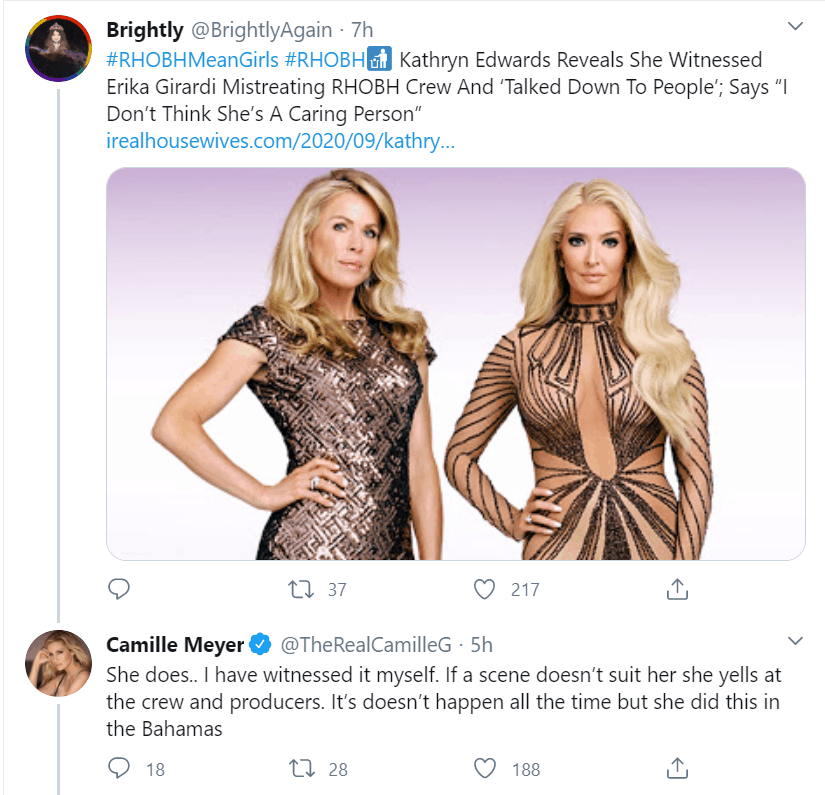 The Twitter user, BrightlyAgain, then asked more from Camille, wondering if people “cower[ed]” when Erika allegedly “went off.”

“No one of the producers said sarcastically ‘great, now I’m getting cursed at by housewives,'” Camille replied. 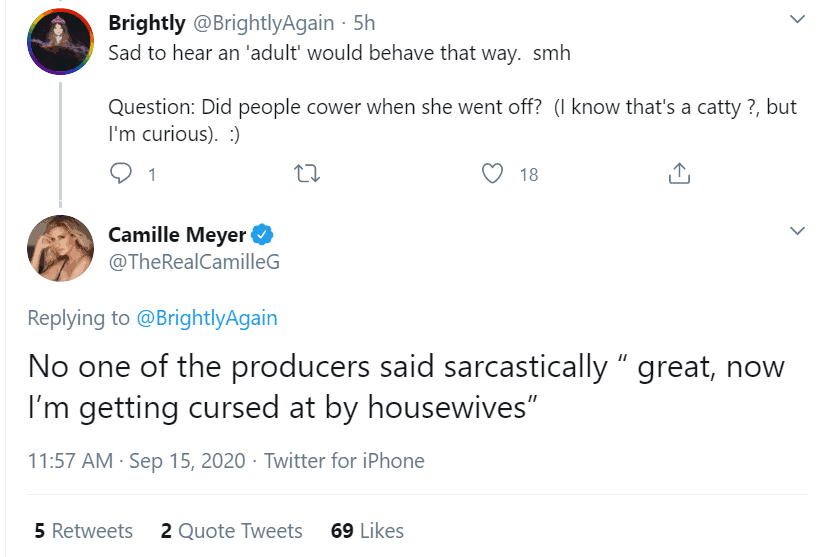 Although Camille admitted to Erika supposedly being a diva on set with the producers and crew, she confessed that Erika was actually okay within the context of their relationship.

“Dang! I can’t with her attitude, persona,” the user responded to Camille. “Was she ‘nice’ to you?”

“She was fine,” Camille simply replied, noting how the two remained friendly. 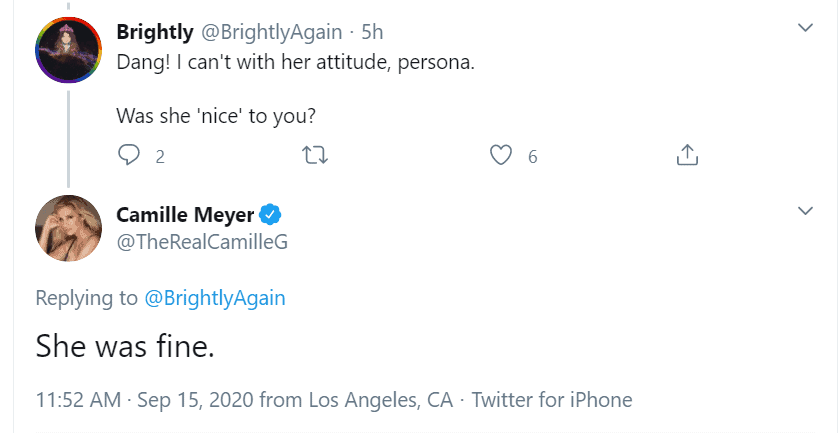 This isn’t the first time Camille has come for Erika. She also slammed the Broadway star back in July for her comment about Denise Richards‘ daughters and also said she only brought “self-promotion” to the series.

This also isn’t the first time Erika has been accused of poor treatment, as TikTok star Amir Yass called the Pretty Mess author a “motherf–king nightmare” in July and alleged she tried to get him fired.