RHOC Premiere Recap: Braunwyn Admits She’s an Alcoholic While Kelly and Shannon Hash Out Their Differences 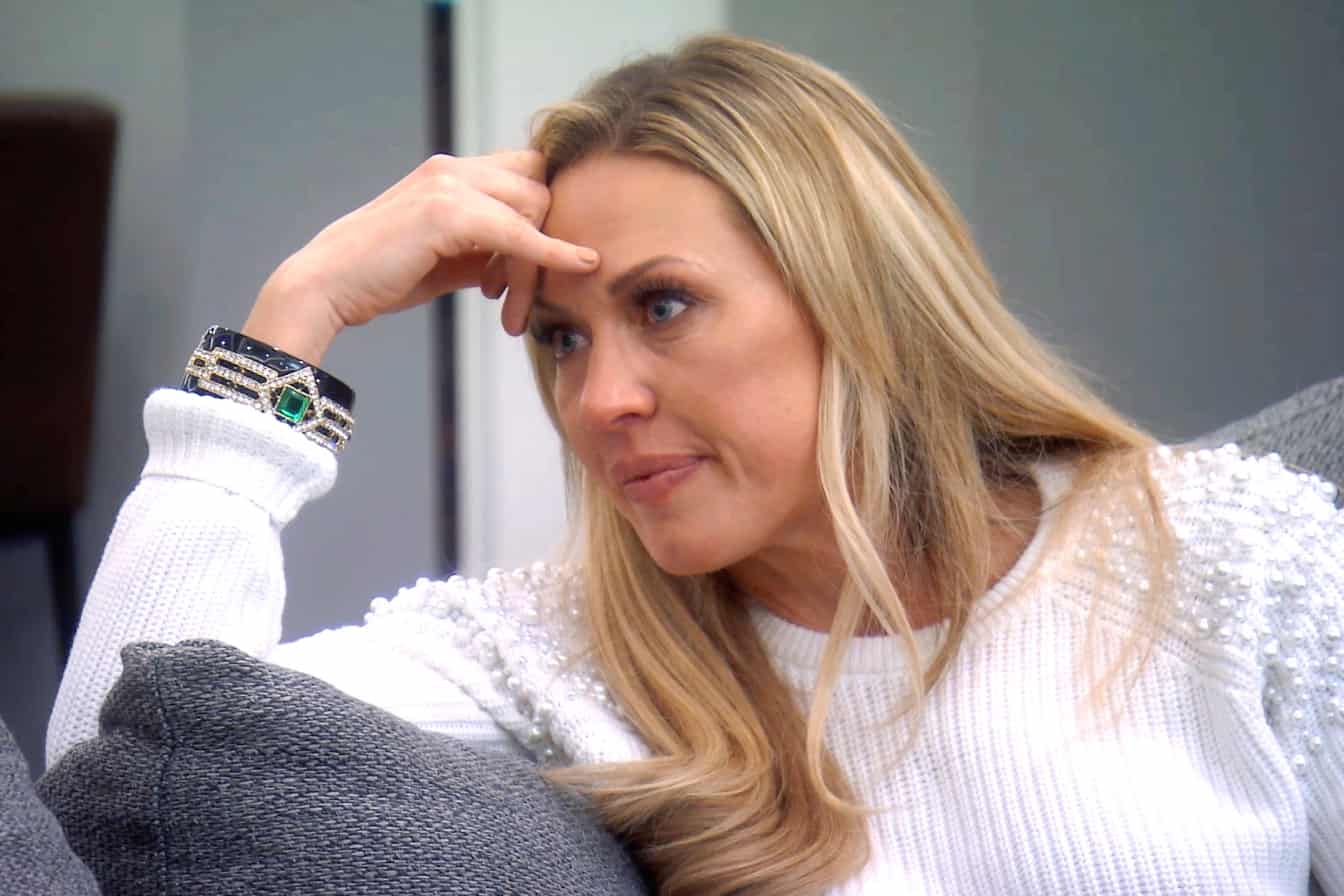 So the seasons DO change in the OC, huh? Goodbye, Vicki. Sayonara, Tamra. Hello to the new on this season of the Real Housewives of Orange County. Also, was that the voice of Jeana Keough during the introduction? Talk about bringing it back…

Kicking things off is Shannon — a happy, smiling Shannon, which is incredibly refreshing to see. Shannon is mainly happy because there is a new man in her life. John makes his debut and the two are quite cute together, although they don’t live together. Shan just got a new place, because that’s what these women do — move. It’s basically like the Beador bunch — a lovely mixed family and Shannon’s kids get along swimmingly with John’s kids. It’s nice to see Shannon giggling like a schoolgirl, but can we all agree that she sort of sounds like she’s been sedated in her confessional? Side note: Can we discuss the painting of Shannon in her gym?! Seems like someone got a boost of self-confidence, huh?

Guess it’s the season of new men. Enter Kelly and Rick Leventhal. Kelly is head over heels in love with her fiancé. In case you didn’t believe it, Kelly does an excellent job of grossing viewers out by discussing her sex life with Rick any chance she gets. “He gets it on like Donkey Kong.” EW. Apparently, Jolie, Kelly’s daughter, is happy for her mother’s new relationship. That’s nice and all, but why are they all squished together on the VERY comfortable looking Ferris wheel?

So Gina got ANOTHER new house? This lady’s moved more than most adult people I know. Gina explains that the past year has been like a soap opera, but now that she has Travis, her boyfriend, things are looking up. Shannon comes over to see the townhouse that Gina bought *all*by*her*self and notices that it seems a bit cramped considering the number of people staying there. Travis has kids and Gina has kids, but the bunk beds help make the space manageable. Kinda.

Gina and Shannon chat about Kelly’s recent engagement and Shannon could care less. She is still a bit sour about Kelly’s meddling in her lawsuit last season. It doesn’t help that there’s talk that Kelly will be moving into Shannon’s neighborhood. I mean, Shan already has a Braunwyn as a neighbor. Could it GET any worse?!

Kelly scoops up Braunwyn and the ladies go to visit their friend, Elizabeth Vargas. Elizabeth has got some money and a boyfriend, Jimmy, who is apparently a chef (get a load of the spread he put out for the ladies). But wait — Elizabeth is “married?” I am SO confused. It turns out that Elizabeth is in the process of divorce. Her ex-husband is legit a billionaire andddd had a child with someone else, even though he told Elizabeth he didn’t want to have kids. Talk about OUCH. I wish we dove more into that instead of seeing Kelly’s random friend interrupt with a crockpot return. Sigh.

It must be a new season — Shane and Emily are actually smiling and are actually out on a date?! Eleven whole years of love between those two. Apparently, Shane has been “amazing,” but did he finally pass the bar? Nothing makes me cringe more than watching Emily go in for a smooch as Shane looks at her like she’s an alien. Shane attempts to be a good husband and ask about the girls of the OC to pass the time and hold a conversation. Emily claims that she cannot have an actual relationship with Braunwyn because the girl straight drinks too much. Immediately it is realized that *this* will be a storyline this season, even though Braunwyn turned down champs at Elizabeth’s beach house earlier….

The next day, Shannon strolls over to Braunwyn’s new house because NEIGHBORS! Does anyone live in their house for more than one season? Braunwyn’s home is pretty incredible — gyms and dance rooms and pirate ships, oh my! Snotty Shannon discusses Gina’s new *townhouse* living situation and Braunwyn states that this is a “not a good choice” for Gina to have her boyfriend move in. Shan and Braunwyn judge the size of Gina’s place…you know, the one Gina paid for alone. They are also quick to judge Kelly. Braunwyn is pushing for Kelly and Shannon to forgive and forget, and she offers her house as a meet-up for the apology tour.

In the meantime, Kelly and Gina attend a hot yoga session. Because Gina is in loooove, she has “just been eating wheels of brie.” Oh, Gina. As she explains it, she has a “situation to handle” …aka some weight gain. After the ladies partake in the yoga sesh, it doesn’t take long for Braunwyn’s name to come up. Kelly shares that while in Miami for Rick’s 60th birthday party, Braunwyn was WILD. Gina jumps on this and states that Braunwyn’s drinking has been out of control lately. To be fair, Braunwyn does have 97 kids. Let the lady drink if she wants…

Elizabeth is clearly trying to be the new LVP. Since she has adopted her dog, Coda, she feels like the animal whisperer and wants to set up a shelter. This is a heartfelt way for her to spend her ex-husband’s money. LOL. Elizabeth explains that she makes her own money as she is the founder of Edge music network. Although her ex is a gazillionaire, Elizabeth explains that got tired of being the “bobblehead wife.” She did not want to be the “arm-candy billionaire’s wife.” HUH. Sign ME up.

Braunwyn is dead set on Kelly and Shannon reconciling their differences. I guess she sees it as, if they are all gonna be neighbors, then they better start getting along. Kelly is the first to arrive and demands a shot, which Braunwyn declines. When Shannon enters, it is interesting how Braunwyn pours two shots for the girls but makes it clear that she isn’t drinking right now. Hmm…

As an olive branch, Kelly gives Shannon some Uno cards (bye-bye, tres amigas), and although Shan cracked a smile, she is still hurt by Kelly’s low actions with the lawsuit. Hilarious how Kelly feels that Shannon cannot take accountability for her actions. LOL. Juuust as Braunwyn feels like Shannon is getting through to Kelly, Kelly legit gets up and walks away to pee, mid-Shannon sentence. RUDE. Upon Kelly’s return, Shannon apologizes (as she is just so happy in her life now) and Kelly apologizes (cuz let’s be honest, you can’t have beef with your neighbors!).

We get to meet Travis, Gina’s new man. He seems pretty cool, but it’s weird how he doesn’t really open his mouth when he speaks…and that he is able to be with Gina and her accent 24/7. Gina brings Travis along for her meeting with her lawyer to discuss the most recent news about her ex, Matt. The restraining order is still pending and Gina claims that Matt has been doing better since attending anger management classes. It’s all about the kids for Gina and she hopes that things will work out.

Later, Braunwyn invites Emily over for what seems like an awkward hangout. Emily and Braunwyn are still not friends and this is one of the first times they are getting together since last season. When Braunwyn pours Emily her glass of champagne and plops down on the sofa, it is clear she has something heavy on her mind that she wants to share.

Braunwyn apologizes to Emily right off the bat and immediately melts down. She reminds Emily that she called her out on her drinking and that she wasn’t quite ready to hear that from someone. Braunwyn further explains that she hasn’t had the best last few months and that she didn’t stop drinking for four days straight while in Miami for Rick’s 60th birthday. Braunwyn states that she started drinking at 14 and pretty much only stopped when she was pregnant…basically for like, 14 years. So essentially, Braunwyn stops herself from drinking by just having babies? She is uncomfortable being vulnerable and admits that she doesn’t really know who she is without booze.

Emily listens intently as Braunwyn explains she feels as though she can never drink again and she is scared out of her mind. Then she drops something heavy: “My name is Braunwyn and I’m an alcoholic.” Guess things aren’t always as they seem…