Home Real Housewives of Orange County News RHOC Star Kelly Dodd Says She Has Tested Negative for COVID-19 Amid Illness Following Her Wedding, See Her Test Plus What She’s Saying About Her Sickness Now

RHOC Star Kelly Dodd Says She Has Tested Negative for COVID-19 Amid Illness Following Her Wedding, See Her Test Plus What She’s Saying About Her Sickness Now

Kelly Dodd says she did not contract COVID-19 after her weekend wedding to Rick Leventhal.

After sparking concern among her fans and followers on Instagram earlier this week by sharing a video of herself coughing amid complaints of being sick and revealing she was being treated by her Real Housewives of Orange County co-star, Shannon Beador, Kelly returned to social media where she confirmed she has tested negative for the coronavirus.

After rumors began swirling in regard to Kelly’s potential diagnosis on Wednesday, the newly married RHOC star confirmed her illness was nothing more than a cold. 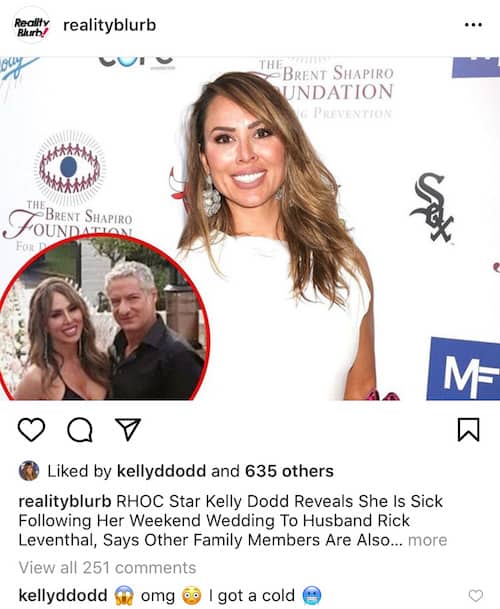 As fans may have seen on Instagram, a number of Kelly’s online audience members assumed she was suffering from COVID-19 after she shared a handwritten note from Shannon and confirmed she was taking Vitamin C supplements, which Shannon had used to treat herself while battling the virus earlier this year.

For months, Kelly has been under fire for comments she’s made about COVID-19 as well as the way she has acted throughout the pandemic.

Months ago, as she traveled back and forth between Orange County and New York City, despite the ongoing spread of the virus, Kelly shocked fans when she suggested the illness was “God’s way of thinning the herd” before later apologizing for the offensive statement.