Kathryn Dennis and Thomas Ravenel‘s custody battle appears to have been rebooted.

On the heels of Thomas’ announcement regarding his plans to marry Heather Mascoe, the mother of his third child, a new report has revealed that the former Southern Charm cast member is planning to move two hours away from where Kathryn lives in Charleston, South Carolina, and revealing that he wants to take their two kids, Kensington, 6, and Saint Julien, 4, with him.

In a letter sent to Kathryn’s attorneys at the Johnston Family Law Firm and described by FITSNews on October 15, Thomas’ attorneys revealed his intention to move the children to Aiken, South Carolina and change not only their school, but his custody arrangement with Kathryn.

“Pursuant to Section I(D.)(2.) of the parties’ 2019 Agreement, Mr. Ravenel is providing Miss Dennis notice of his intent to relocate to Aiken, South Carolina next summer after the children complete the 2020/2021 school year,” the letter stated. “Mr. Ravenel believes this move is in the children’s best interest due to the notoriety and negative attention they have received in Charleston as a result of the parties’ public personas. Mr. Ravenel had significant difficulty finding a school in Charleston to accept Saint as a student this academic school year, and he feels the children would not be nearly as prejudiced residing in a smaller town such as Aiken.”

According to Thomas’ attorney, Kelley D. Andrews-Edwards, the distance between him and Kathryn will mean that they are no longer able to share custody.

Once Thomas relocates to Aiken, he plans to enroll the kids at a private Episcopal school.

As for his plans with Kathryn, Thomas is offering his ex-girlfriend visitation every other weekend during the school year and four weeks during the summer.

“It is Mr. Ravenel’s hope that he and Miss Dennis can reach an agreement amicably without the need another contested custody action,” the letter continued. “Please discuss the above terms with your client at your earliest convenience and let us know if she is amenable to this proposal. Mr. Ravenel has authorized me to keep this offer open for one (1) week. It is set to expire at end of business day on Wednesday, October 7, 2020.”

According to the report, Kathryn did not respond to Thomas’ request by the October 7 deadline and was completely blindsided by his impending move. She also allegedly feels that her kids are happy with their current school placement.

“I’m getting engaged to marry Heather Mascoe,” he told a fan.” I’m a lucky man!” 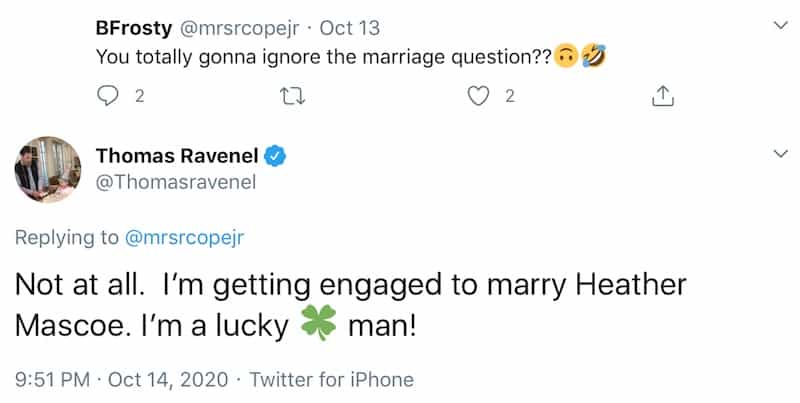