Three months after welcoming his third child, son Jonathan, with Heather Mascoe, the former Southern Charm cast member revealed he will be tying the knot with no prenuptial agreement. This is because when it comes to his future wife, he doesn’t feel she is someone he would need to protect his assets from.

“Did anyone know I’m getting married?” Thomas asked.

Right away, Thomas was flooded with questions from his fans and followers, one of whom wanted to know if he’d be making his fiancée sign a prenup.

“Not with this one. No need,” he explained.

Another suggested Thomas’ wedding would be televised, which he quickly shot done.

“Wow, no but can not wait to see this pan out on [Southern Charm],” the person stated.

Although a number of other people questioned Thomas about who he was actually marrying, the former politician, who shares two children with his former Southern Charm co-star, Kathryn Dennis, didn’t confirm her identity.

As fans may recall, news of Heather’s pregnancy first hit the web in March of this year. However, at the time the news was shared, it was noted that she and Thomas were no longer dating.

Once Jonathan arrived in July, Thomas spoke about the status of his relationship with Heather, revealing that the two had not reconciled their romance and had instead remained “really good friends.”

“That’s how I’d put our relationship, really good friends. She’s happy and I’m happy,” he explained to the Daily Mail, adding that Heather is “a phenomenal mom.”

While it is certainly possible that Thomas is marrying the mother of his son, the theory has not yet been confirmed nor has a reunion between the two.

As for Thomas’ other ex-girlfriends, Ashley Jacobs and Kathryn, Ashley is currently in a relationship with Mike Appel, and Kathryn is believed to be dating Chleb Ravenell.

UPDATE: Thomas confirmed on October 14 that he is indeed planning to marry Heather, the mother of his newborn son. 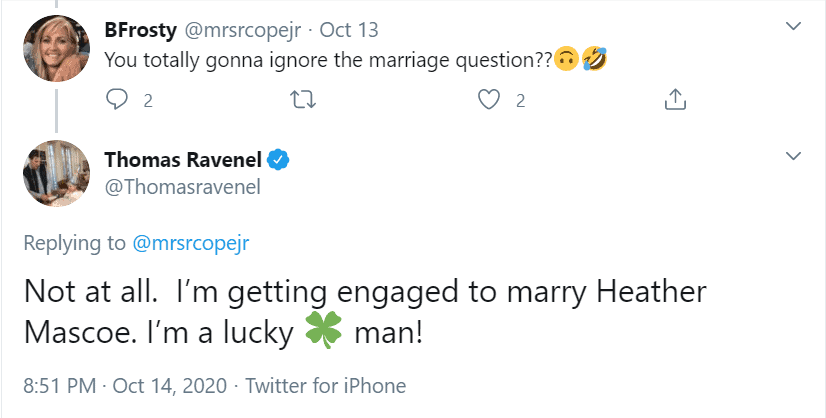