RHOSLC Recap: Mary Tells the Truth About Marriage and Heather Opens Up About Her Divorce 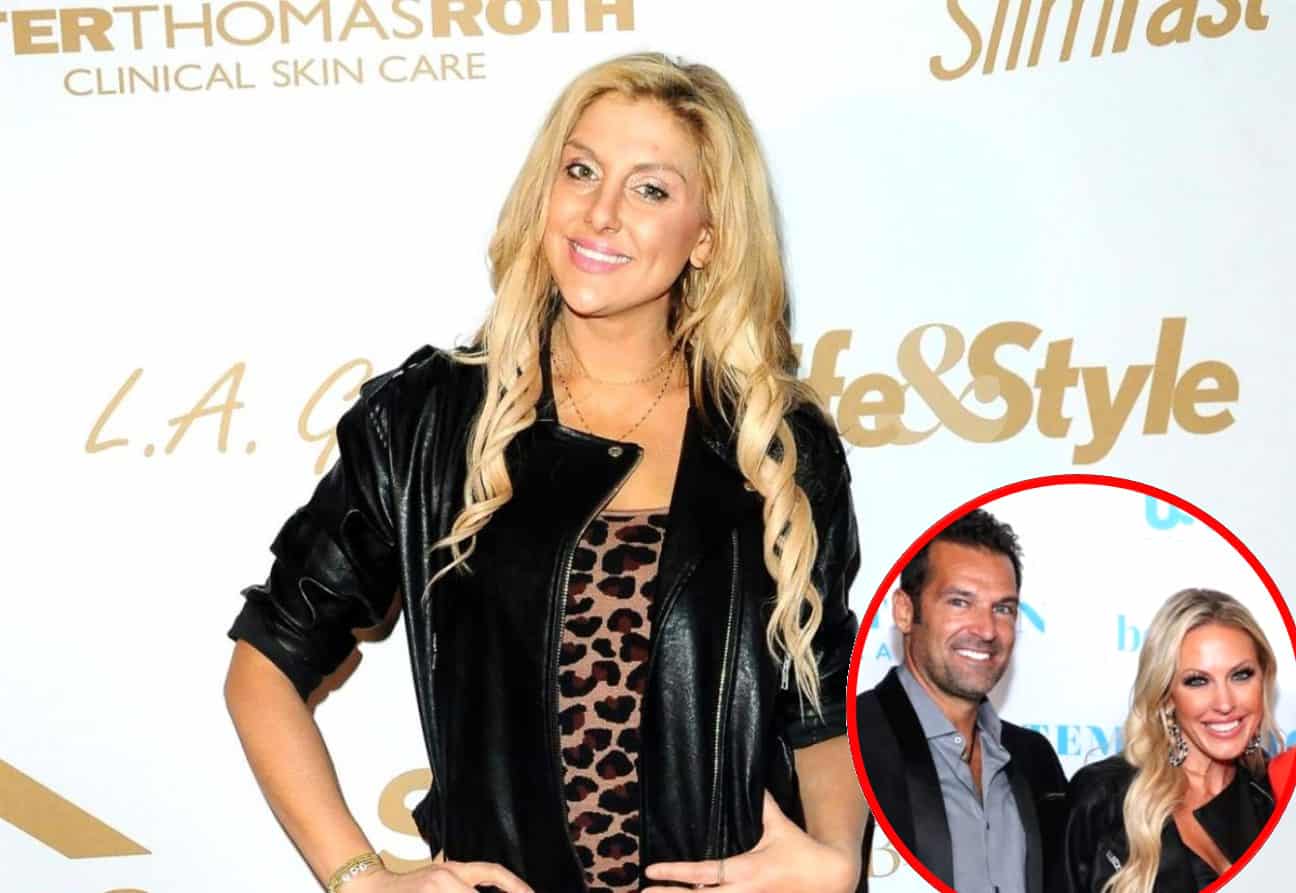 Gina Kirschenheiter is fighting back against claims of saying “mean” and “homophobic” things about Braunwyn Windham-Burke and her husband, Sean Burke.

Following a wild outing with Emily Simpson on the latest episode of The Real Housewives of Orange County, which featured the ladies “talking crap” about the couple, Gina responded to fans who slammed her for her comments before reacting to her heavy drinking and admitting she didn’t know Braunwyn was an alcoholic at the time the episode was filmed.

“You’re a mean girl. I had hope for you but you blew it talking crap behind everyone’s backs,” one person wrote in the comments section of Gina’s latest photo.

“Wish [you knew] me or any of us or anything that actually happened to us. Think you would think differently. But [you’re] entitled to your opinion,” Gina replied.

“You did Braunwyn and [Sean] dirty and your assumption that Braunwyn wanted you is homophobic and arrogant. Also you make terrible decisions… you’re really gonna be mad at her for saying that??” another fan wondered.

“People who make irrational snap judgements [are] the most phobic people of everything progressive. I hope you open yourself up to view life beyond this judgement,” Gina responded, also slamming the fan for being part of “troll nation.” 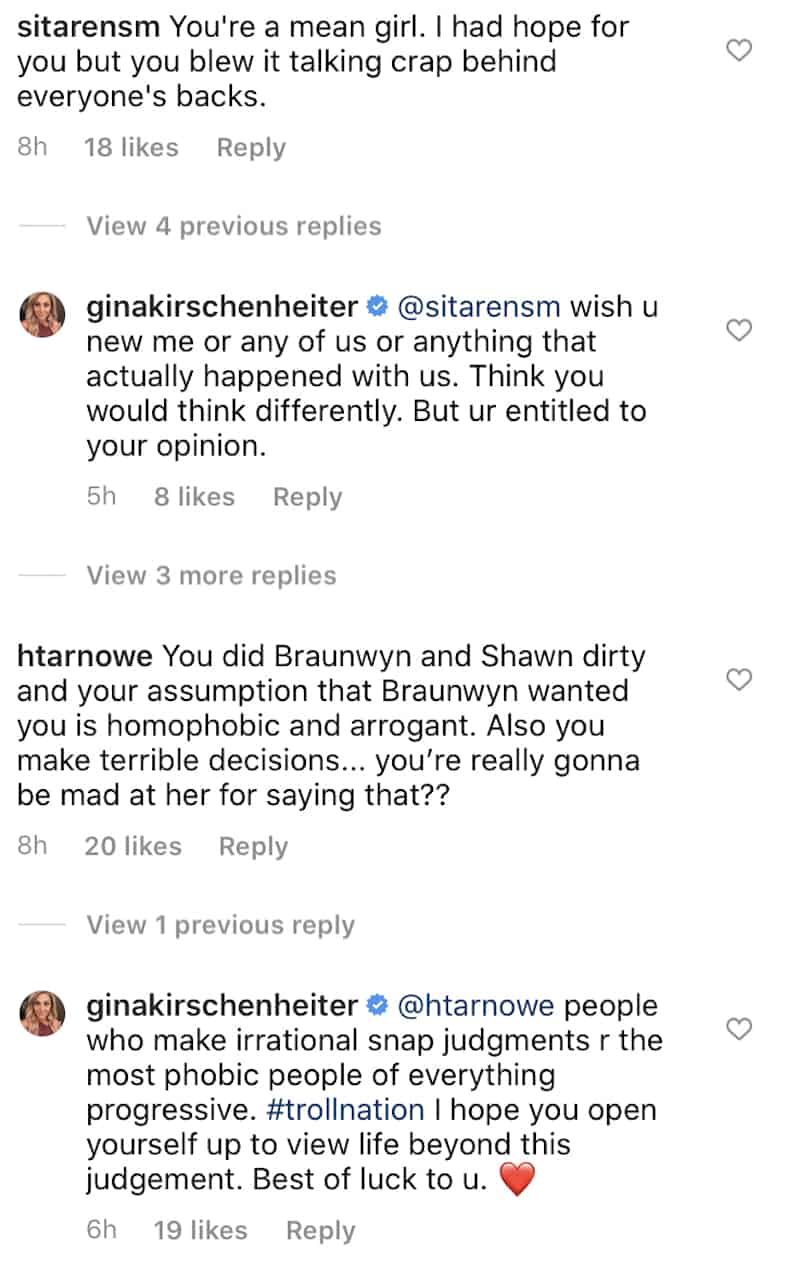 Another RHOC viewer put a spotlight on the many shots Gina was seen taking with Emily during the episode.

“I know this is a reality show.. and I know you ladies love to have a good time… I just wish you all could have a good time without being totally sh*t faced,” they stated.

RELATED:  Margaret Josephs Dishes on Why Housewives Drink So Much and What Keeps Her Away From Alcohol, Promises "Savage" Upcoming RHONJ Season

“I rarely am on the show. But we all have a night every once and a while girl. You just don’t have to share them,” Gina noted. 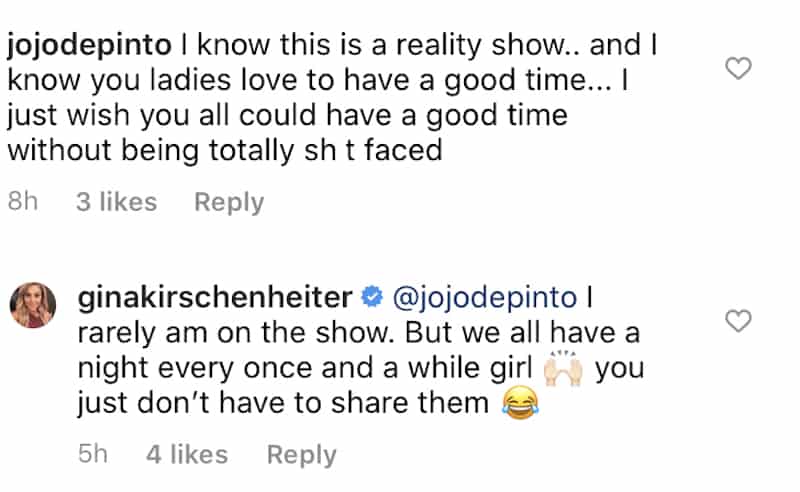 Others were more supportive of Gina and her role thus far on season 15.

“You look great [and] Braunwyn owes you a big apology for being mean [and] petty about your house!!” someone shared.

In response, Gina suggested she is one of the many people who Braunwyn owes apologies to before telling the fan she’s okay if an apology “never comes.” 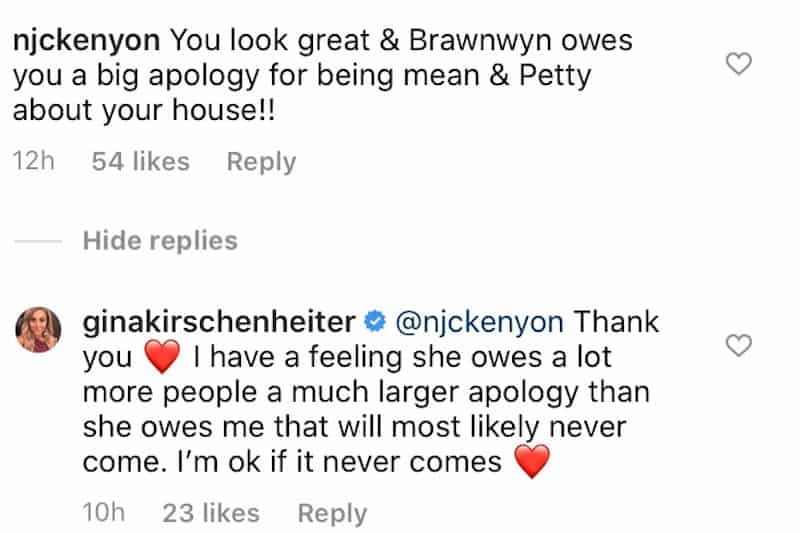 Gina also pointed out that she was unaware of Braunwyn’s alcoholism during the early moments of season 15.

“Give her time and I don’t think any of what happened is about you or your home. Not that she shouldn’t be held accountable for saying unkind things,” a fan stated.

“Keep in mind I didn’t know she was an alcoholic,” Gina clarified. “Just [knew] she was everything else she is.” 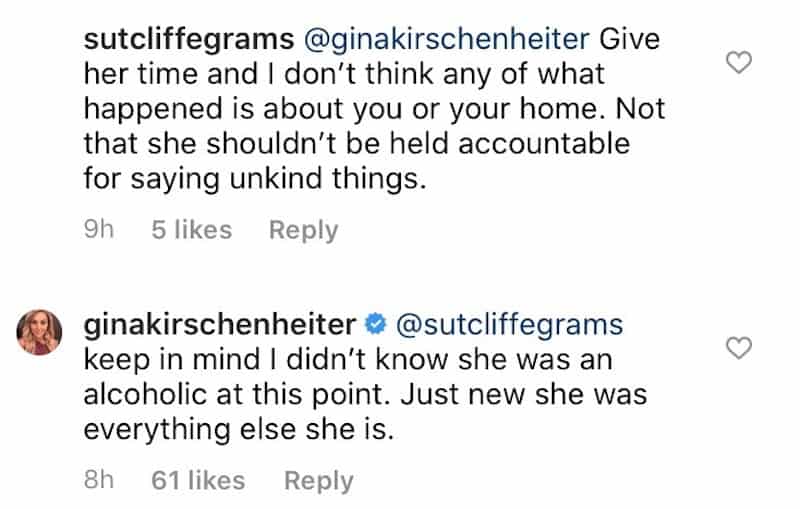