Will Lisa Vanderpump‘s PUMP Restaurant and Lounge follow Villa Blanca and become the second restaurant she has been forced to shut down permanently this year?

As dining restrictions in Los Angeles continue to intensify, the former Real Housewives of Beverly Hills cast member shared an odd message with fans on Twitter as suspicious photos of a rental company cleaning out the West Hollywood hotspot were shared on Instagram.

“After much cost & consideration for the well being of staff & guests we endeavored to open. Sadly, many restaurants will not reopen,” Lisa wrote in a message to her followers on November 24. “We want to thank patrons and incredible staff who followed stringent guidelines. Masks are essential, stay safe we will prevail. Happy thanksgiving.” 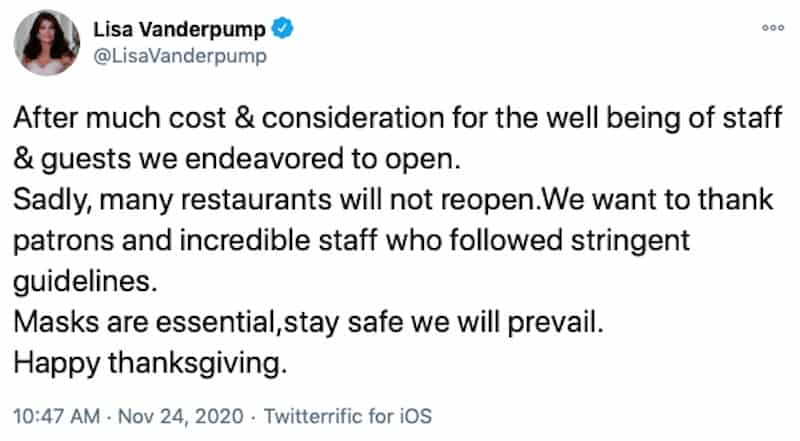 As fans may have seen, Lisa began voicing her concerns over the ongoing shutdowns in Los Angeles, and after Governor Gavin Newsom announced a new stay-at-home order, as well as a curfew that requires non-essential business to close by 10 p.m., she called him out for dining maskless with several people in Napa Valley by suggesting he should practice what he preaches.

“Don’t do as I do, do as I say,” Lisa wrote in a message mocking his behavior.

She also slammed his antics as “hypocrisy at its finest.”

While Lisa has not yet addressed the potential closure of PUMP, Real Housewives fan Christian Gray Snow shared photos of PUMP’s exterior on Instagram on Tuesday and revealed that a rental company, Big Top Rentals, was “cleaning out” the restaurant.

“Following LVP’s cryptic tweet about the LA restaurant shutdown this morning, a rental company is cleaning out PUMP,” he shared, adding that he spotted the commotion “on [his] coffee run.”

“I must admit, I have many questions about Lisa’s decision to delay the openings of her businesses when they are primarily outdoor dining spaces,” Christian continued. “SUR didn’t reopen until Sept 23 and PUMP reopened Oct 28 despite outdoor dining thriving through the summer in Southern California. Interesting. Guess time will tell what’s happening.” 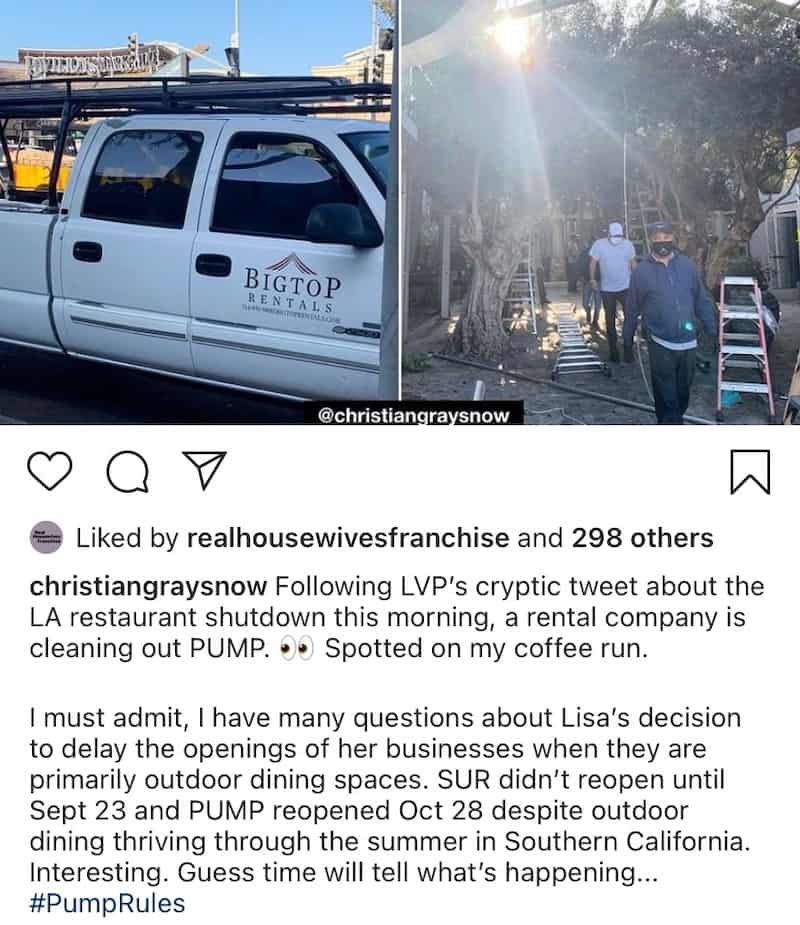 Following the sharing of Christian’s post, a number of his online followers weighed in.

“[Lisa]’s been broke way before the pandemic,” one person said.

“There was a revealed blind not too long ago that hinted that she would be filing bankruptcy,” a second person noted, citing a past rumor that Lisa has since denied. 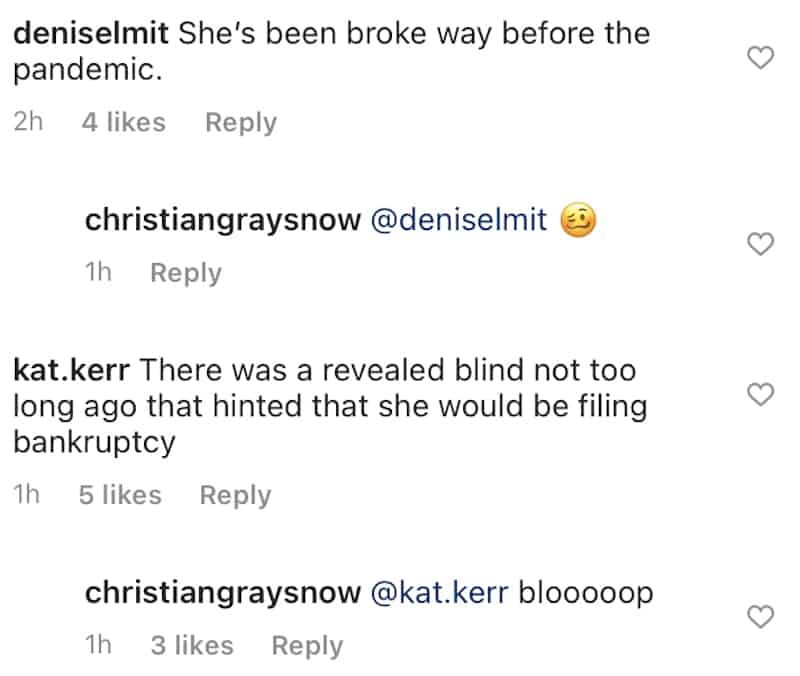 Another person suggested the pending lawsuit against Lisa and her husband, Ken Todd, may be to blame for PUMP’s potential closure while someone else said that Big Top Rentals were simply installing the venue’s winter tent for the upcoming season. 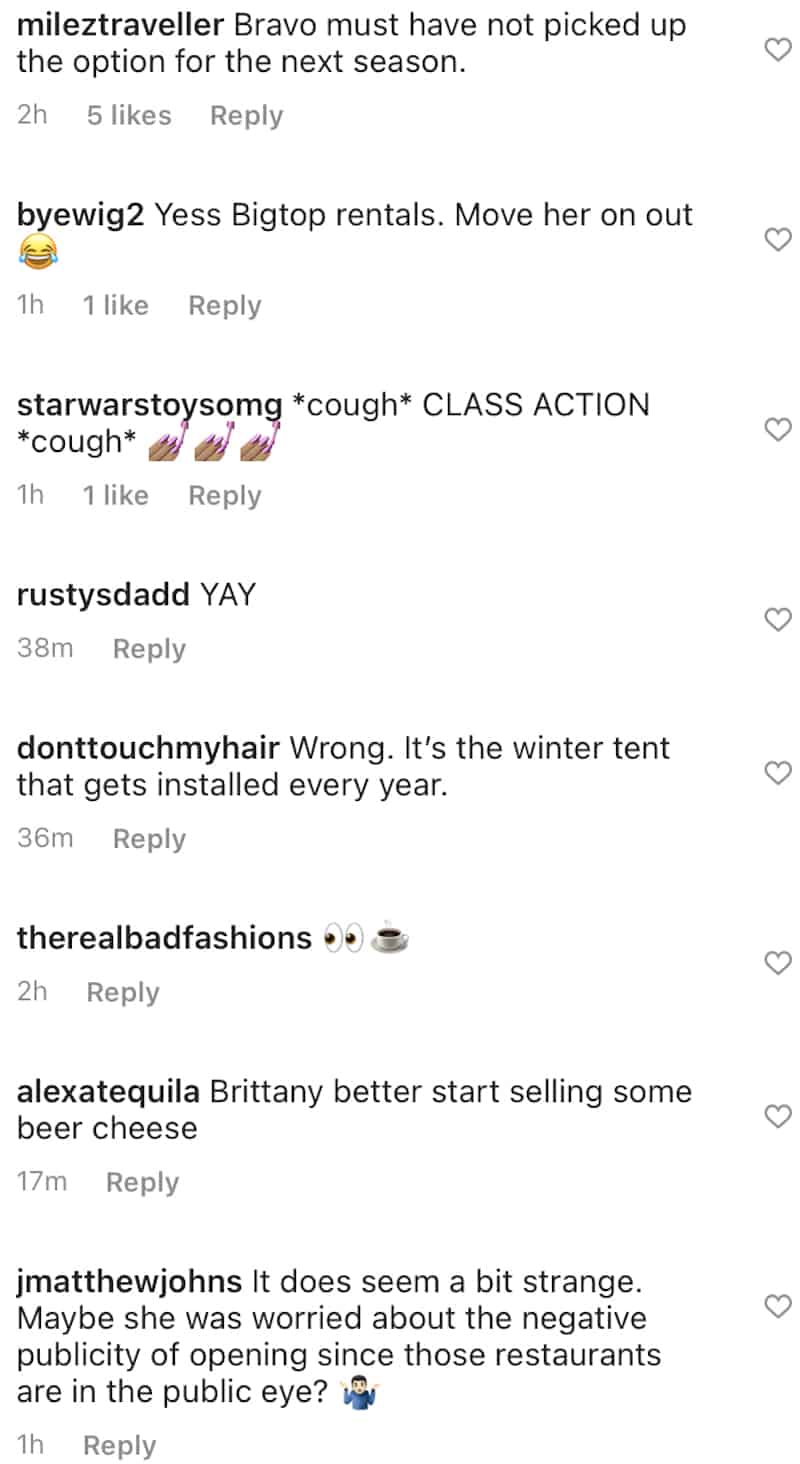 Twitter users also spoke out after the images were posted, a couple of whom were confused by Lisa’s message and the happenings at her restaurant.

“Is she closing down Pump?” one person asked. “I thought it had reopened though. She has the garden. The TomTom is the one that had not opened. Might be closing for good.”

“Yea what was with it being like a non-announcement announcement??” wondered a second fan.

In addition to the stay-at-home order and a curfew requirement, another order is expected to go into place in Los Angeles on Wednesday, November 25, which will keep restaurants, breweries, wineries, and bars from hosting in-person dining. As a report shared by the County of Los Angeles’ Public Health explained, these facilities will be able to offer only take-out, drive-thru, and delivery for at least three weeks.

Although Lisa has been starring for years in her RHOBH spinoff, Vanderpump Rules, the series has been in hiatus for several months amid the ongoing pandemic.

UPDATE: Us Weekly is reporting that PUMP is not shutting down and Lisa plans to reopen it as soon as the lockdown rules are lifted.