PHOTOS: Kathryn Dennis Gets Cheek and Lip Fillers Plus Stomach-Sculpting, See Southern Charm Star's Before and After Pics 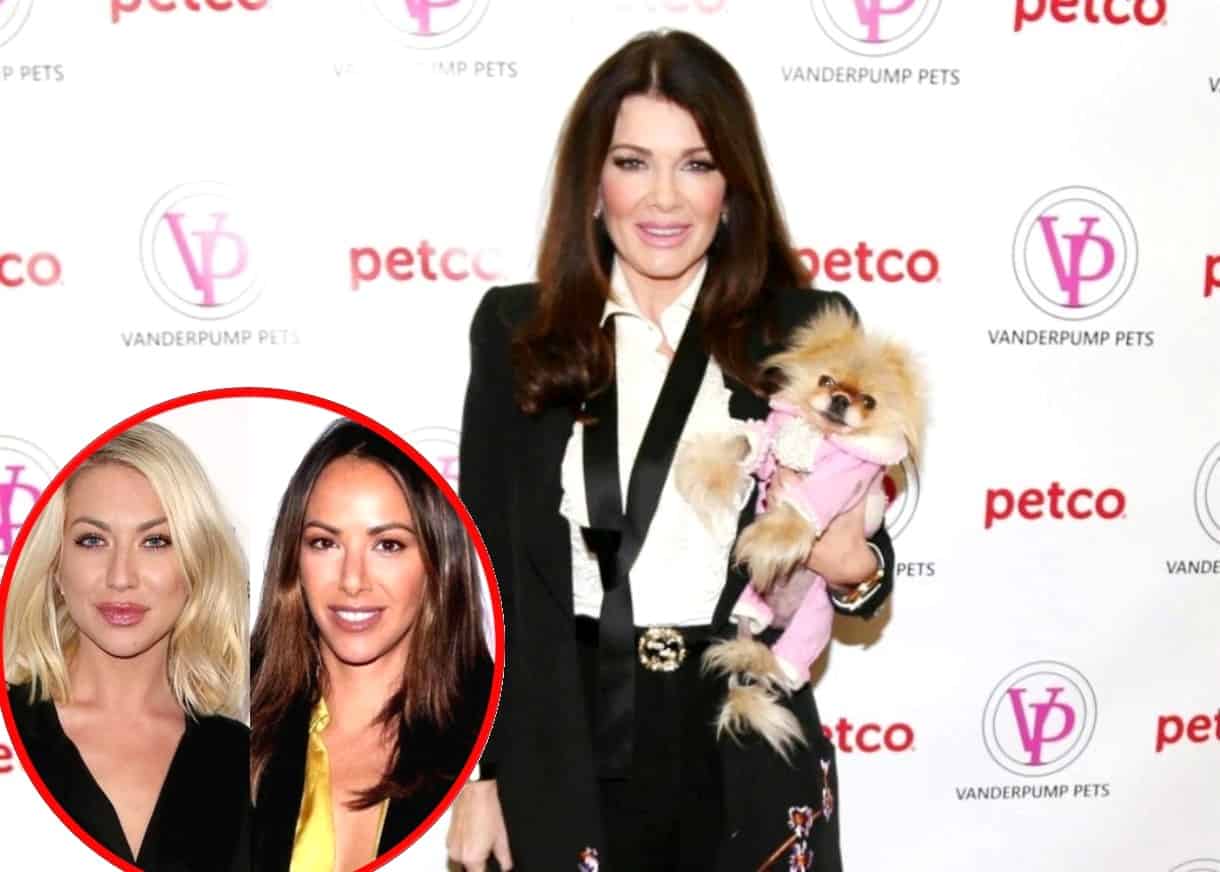 After shutting down Villa Blanca, the former Real Housewives of Beverly Hills cast member took to Twitter to deny claims of being “broke” before addressing a fan who criticized her for saying she didn’t agree with Bravo’s decision to fire Stassi Schroeder and Kristen Doute from Vanderpump Rules.

“So [Lisa Vanderpump] is broke, bankrupt, done, right?” a fan asked on September 16. “Villa Blanca [is] closed for good and the rest of the restaurants should be next. No wonder no one knows whether [Pump Rules] will be back for another season or not. There’s no restaurant to film in and [Lisa Vanderpump] has no money to produce the show.”

In response to the person’s suspicions, Lisa revealed she is not broke before admitting that it has been challenging having to have her Los Angeles restaurants closed amid the COVID-19 pandemic.

“No darling not broke, of course it’s been difficult, but we will open when we feel it’s safe,” Lisa confirmed. “[Villa Blanca] was at the end of a long lease that was up, my staff need to be safe …us too.” 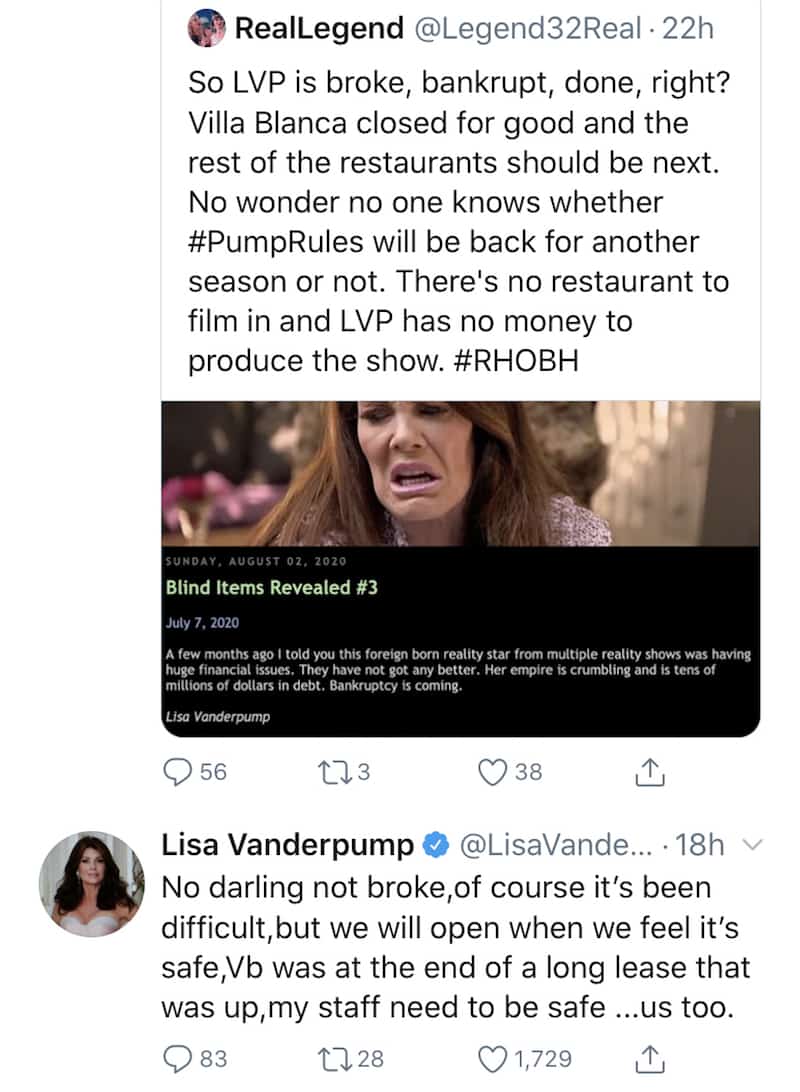 In a second tweet, Lisa responded to someone who targeted Lisa for failing to support Bravo’s decision to let Stassi and Kristen go due to their racist behavior toward Faith Stowers.

“I don’t care for Lisa Vanderpump after she didn’t agree with Bravo for firing Stassi Schroeder and Kristen Doute for [their] racist action toward Faith Stowers. (Just saying),” the person stated.

“I said actions have consequences but I believe there is room for everybody to grow and learn,” Lisa replied. 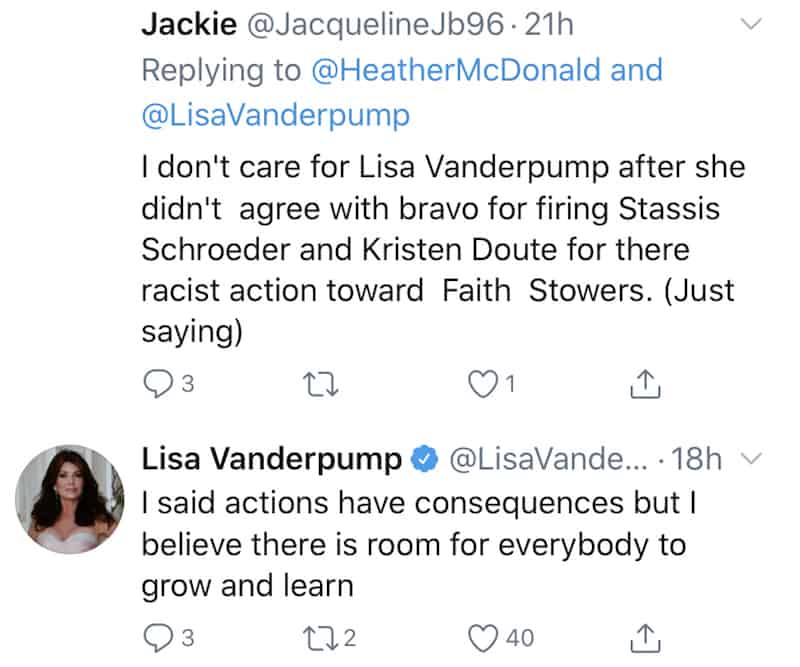 Following news of Stassi and Kristen’s firings, Lisa spoke of “consequences” on Instagram.

“I am deeply saddened by some of the lack of judgment that has been displayed. I have always been an equal rights activist and ally – my family, my businesses and I condemn all forms of cruelty, racism, homophobia, bigotry and unequal treatment,” she wrote. “We’ve never tolerated it in the workplace or our lives.”

A short time later, Lisa told Entertainment Tonight she would not have fired Stassi and Kristen from Pump Rules if it were up to her.

“I do think that people can learn from their mistakes,” Lisa said last month. “If it were up to me, I would like to see them go on, but really have a better understanding of where they went wrong and really, you know — I’m not into just kind of getting rid of people, because they get it wrong. Otherwise, I’d probably have nobody working for me at this point.”

“I’m all about giving people second chances, yes, but also about holding people accountable,” she added.

RHOBH Star Brandi Glanville Dishes on ‘Mortifying’ Dinner With Ramona Singer, Slams RHONY Star For B...
RHOBH's Camille Grammer Accuses Bravo of Playing Favorites and Says She'd Only Appear on an OG Speci...
Is Denise Richards in Jeopardy of Being Fired From RHOBH Because She's "Far Too Controlling" for Rea...
In this article:Kristen Doute, Stassi Schroeder, Lisa Vanderpump, Vanderpump Rules, Real Housewives of Beverly Hills, RHOBH