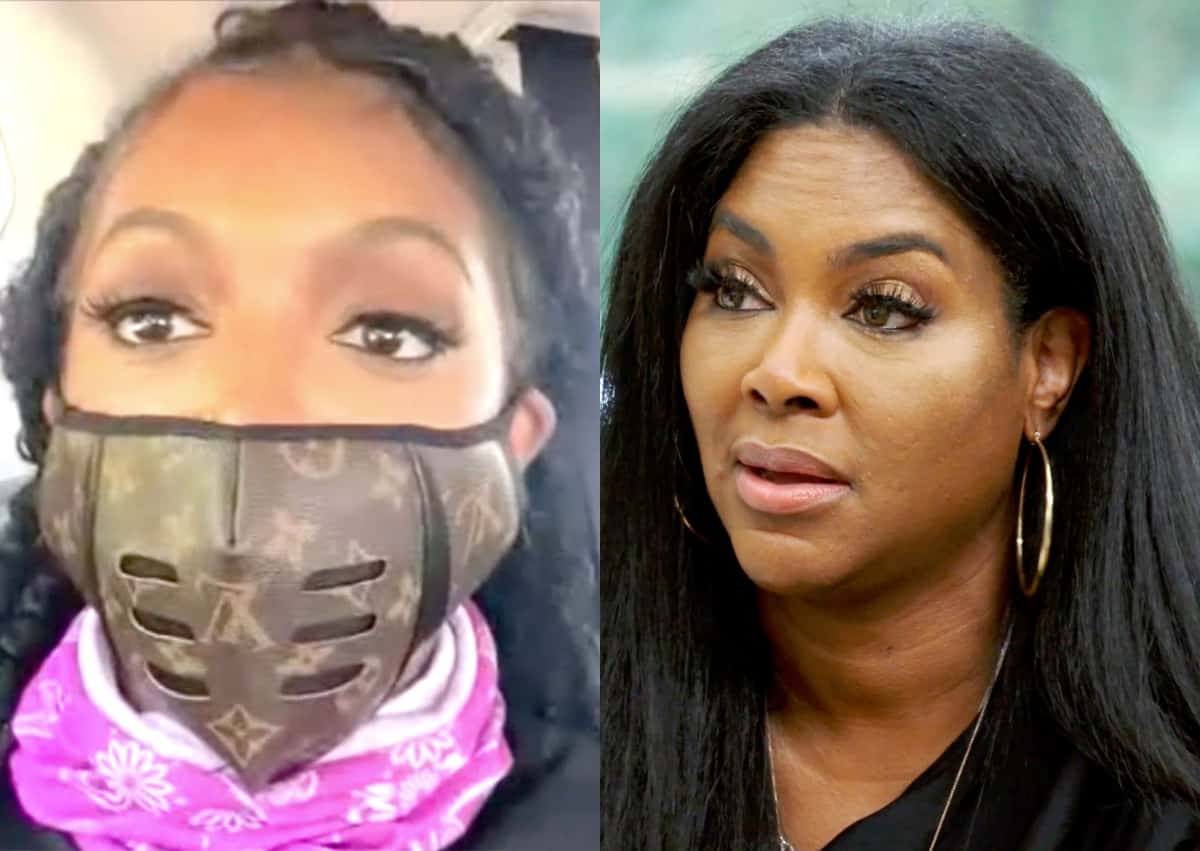 Welcome back to the Real Housewives of Atlanta! This should be an interesting season without Nene so let’s find out what the ladies have all been up to, shall we?

We join the RHOA for their first COVID-19 interview. The ladies all had to be tested for this season before filming. This season has been filmed in its entirety during the pandemic. I kind of like that production started this season allowing them to explain how their lives have been impacted by the virus and the BLM movement.

Kandi, Cynthia, and Porsha discuss how they all got involved in the BLM movement. Porsha shares her anger over the current situation and shows video of her protesting the George Floyd incident with the police. She has chosen to get involved and be a part of something that is very meaningful to her. There are tear gas bombs while she is protesting in Atlanta and it looks really scary.

Kandi in her bright yellow jumpsuit visits Cynthia, aka “T*tty-Cynt,” who has her boobs literally falling out of her dress for a meal in the driveway. They discuss how they had to recently get COVID-19 tests and the challenges they are facing during the pandemic. Kandi and Todd are still getting their freak on during the pandemic. No surprise there!

Cynthia has been holing up in LA with Mike and their families. She is thrilled to be back at Lake Bailey with Mike. Miss Marlo arrives in her shiny running suit and she has to be all extra by bringing her thermometer. She tests them to ensure there are no fevers at this table. Marlo thinks Porsha has become Porsha Luther King. She is proud of her commitment to the cause.

Cynthia decides to FaceTime Kenya to check in with her. She shares that Kenya has been down lately. They have a bad connection and the call drops. Don’t we all suffer from bad connections during this stay-at-home situation? I guess these housewives are dealing with the same stuff we all are. Bad internet connections and weight gain. Big-collective-SIGH.

Kenya is chatting with her friend Brandon and is on her way to visit her lawyer. She has gained 30 pounds during the pandemic. Her face looks really puffy and it might not just be the weight gain. I suspect there are a lot of tears over the Marc situation. Did Kenya just say her marriage has been bad for the last six months? Are you kidding me? Kenya’s marriage — if you can even call it that — has been a trainwreck from the beginning. The only good thing that came out of it is that beautiful baby Brooklyn.

Kenya arrives at the lawyer’s office. She and her lawyer had to be tested in order to shoot this scene maskless. Production shows a montage of videos showing Marc and Kenya’s dysfunctional relationship last season. Kenya shares what has been going on, and apparently, things aren’t good. No surprise there. She can’t understand why it isn’t working out since she is such a good communicator. Production shows a montage of clips where she literally decimated the other ladies with her sharp tongue.

Kenya bought a car for Marc. Hmm, was that a heartfelt gift to her love ? Her lawyer wants to know, “How much contact does Marc have with Brooklyn?” It sure doesn’t sound like much time. IMO, Marc will always be a douche-nozzle. Move on, Kenya, and enjoy that beautiful baby and shelve this disastrous relationship.

In her ITM, the producer asks Kenya, “What is Marc’s relationship with his other children?” She chooses not to answer that question, Kenya wants the custody issue resolved before she files for divorce. I think she is frankly more concerned about her assets than saving her marriage. It must have been a real dagger to her self-esteem for Marc to file for divorce from her.

Her attorney is concerned that she is compromising too much and her celebrity status is playing into it. There is probably some truth to that. He advises her to hang on to what she has. I like that they showed that little scene between them for him to give her a “get real” pep talk. Enough already, Kenya.

Porsha is on her way to a Breonna Taylor protest in Louisville, Kentucky. She recalls being a child and experiencing racism at a young age. Porsha had a grandfather, Hosea Williams, who was an activist and she wants to pay it forward so that PJ can live in a better world. She is willing to sacrifice her own safety for the cause. Porsha is really trying to make a difference this season and I applaud her for her efforts.

Kandi and Todd show us baby Blaze and she is such a little beauty. Riley is watching Todd and Ace wash HER car, which is a Ferrari SUV. She is going to NYU and wants to become a lawyer. Kandi, please adopt me!

Riley and Kandi talk about her dad basically being a deadbeat dad. She expects her dad to step up. In her ITM, Kandi claims that Block owes her $100K for Riley’s child support. Why can’t he pay up if he is driving around town in a Bentley? That is just not cool at all #deadbeatdad. Riley is lucky to have Kandi as her mom.

Porsha shares her iPhone video of the protest. Side note: Is her mask upside down? It is not very effective worn the wrong way, Porsha! She shares they have had to move their locations so the police don’t interfere with their march.

Porsha and Dennis are protesting together, and frankly, I am surprised he is even there to participate. Doesn’t he have a hot dog stand to run? Porsha gets arrested during the protest and the cameras are there to document it. Wow, she is really committed, and I didn’t think she had this kind of activism in her. It must be in her genes to be politically active.

Cynthia and Kandi visit Kenya at her house to see the construction that is going on. She is moving forward with the renovations despite Marc’s influence. Kenya discusses how Marc basically hasn’t changed a bit. Wow, we would never have guessed that, would we? Sorry, I can’t resist snarking on this façade of a relationship. Kandi wants her to move on and so do we since it is painful to see those two together.

Cynthia and Mike are drinking some wine and they are chatting about how rough the quarantine was. She wants to move forward with their wedding plans since they survived the quarantine together. Cynthia has a 10/10/20 wedding date in mind and there is a cap of 50 people because of the pandemic. Mike is fine with a small wedding but Cynthia wants a wedding for like 250 people. She gets the big wedding in the end but at what expense?

Cynthia thinks this is the first wedding that really has meaning for her. Mike wants to get married on that specific day and asks, “Do you really want a marriage or a wedding?” Good question, Mike! I think Cynthia really needs to take the pandemic into consideration and just marry Mike without all of the hoopla, but we now know that didn’t happen.

Todd and Kandi are opening a new steakhouse. Not sure if that’s a good idea during a pandemic but Kandi just can’t take it easy for a moment, can she? It seems this is going to be Todd’s new venture. Thank goodness — how many balls can Kandi juggle? Is she trying out for The Voice next?

Porsha gets released after 13 hours in jail. She shares that being locked up really affected her. Porsha met Breonna Taylor’s mother during the protest and it made her realize how important her mission is. Well, this is a pretty positive start to a season that appears to go off the rails based on the previews!

Next week, we get to meet Drew, and Cynthia is moving forward with her wedding plans despite her guests basically having to wear hazmat suits. This season is going to be off the chain based upon the clips they showed! I hope everyone has a great week!