Home Real Housewives of Potomac News RHOP Season Finale Recap: Michael Loses It and Gets In Fight With Chris as Juan Proposes to Robyn!

RHOP Season Finale Recap: Michael Loses It and Gets In Fight With Chris as Juan Proposes to Robyn! 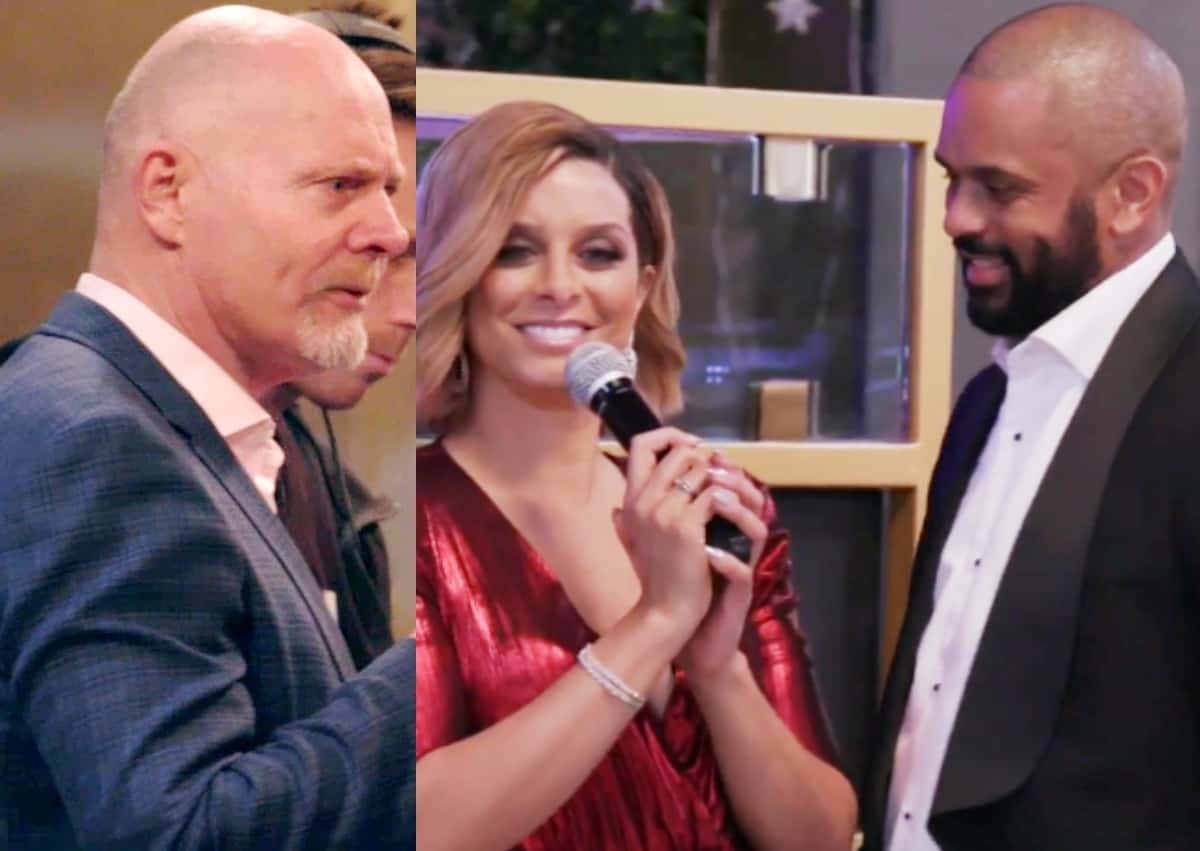 On the season finale of the Real Housewives of Potomac, we witness Michael Darby IMPLODING and Juan proposing to Robyn. Let’s watch this reality teapot boil over and spill all of this crazy tea!

Round two: I just left Atlanta and now I am in Potomac. It is Christmastime in Potomac! I love this time of the year. Based on the previews, this episode looks action-packed. Let’s unpack all of this drama together, shall we?

Robyn and Juan are hosting a holiday party for 50 people. She is inviting all of the ladies except, of course, Monique . Gizelle calls Juan to check on the surprise engagement plan for Robyn. They have a bad telephone connection, which was probably just Juan hanging up on her. I frankly can’t blame the man — I would hang up on her too.

Monique is meeting with the counselor Esther that Ashley recommended to her. She is filling her in on what is going on with the other ladies. Monique feels like she was shut out. She compares this feeling to being bullied when she grew up in a predominately white neighborhood. Monique’s family then moved to a neighborhood that was predominately black, and they were treated badly since they felt they talked like they were white kids.

Esther advises Monique to write a letter to Candiace. She seems to be receptive to the idea. In Monique’s ITM, she tells the producer she is remorseful about her actions but is unapologetic about defending herself. UGH, I was hoping for some progress toward a reconciliation between these two diva warriors.

Ashley and Michael are taking some baby photos of Dean. Michael doesn’t need to worry about Dean looking like him. He is literally a mini-me of him . Ashley tells Michael about Juan proposing to Robyn. Michael isn’t buying it, and he claims to know something about Juan’s intentions. Why would Michael be in the know?

Ashley discusses the wig shift party and the close call with Monique and Candiace. Michael isn’t a fan of Candiace and I am sure it is mutual. He thinks she has a victim complex. Michael shouldn’t be diagnosing anyone else’s conditions since he is a hot mess in that department.

Candiace and her mom Dorothy go to the nail salon together. She shares how her mom has been there for her lately. Karen has really disappointed Candiace since she was a mother figure to her. Dorothy wants Candiace to have a baby so she can move in and help take care of the baby. Candiace wants no part of that .

Karen and Ray are chatting about her fragrance being sold on HSN. Good for you, Karen! She tells Ray her version of events regarding the wig event. Karen tries to explain to Ray the slippery slope she has had to navigate to work through her friends’ issues. Two days later, Karen is now on HSN and looking the part of the Grande Dame of Potomac. Great job, and hail to our Potomac Queen!

Robyn and Juan are finally going to therapy with Erica and we get to hear the backstory on their relationship. They met in 1996 after he lost both of his parents and her parents basically stepped into that role for him. Robyn shares that Juan wasn’t present when the kids were babies. Juan doesn’t want to participate in this line of questions. Robyn definitely has a different perception of their marriage and he calls her out on it.

Juan felt like Robyn put a wall up and wasn’t getting affection so he had to get it elsewhere. He claims their marriage wasn’t a good one. Juan was in the NBA at the time and he wasn’t around for his family. Robyn cries when he admits this to the counselor. I am not buying that it was about a lack of attention from Robyn. It was more about the adoration he was getting from the female fans.

Candiace and Chris are traveling to the holiday party. She was asked to sing her new remixed version of “I See You” for Robyn’s party. Candiace is really excited to sing at the party. She does plan on addressing with Karen the issue of Monique attending the wig party.

Gizelle in her awfully tight silver-tinsel pants and her friend Kal in a sequined green jacket arrive together since Jamal couldn’t make it. She claims he is at the pulpit in Atlanta and he AGAIN is sitting this one out. Gizelle corners Juan to try and find out when the big moment is going to happen. He assures her the engagement is still on.

Michael, in a very hilarious moment, confronts Gizelle about Jamal never being around. He is basically confronting her on her hypocrisy. This probably is the only scene I liked with Michael honestly.

Karen sends a text sharing that she is running late from her HSN gig. The usual suspects aren’t believing this at all.

Candiace, aka Candy pants, and Chris arrive to join the festivities. Wendy and Eddie arrive in winter white looking really stylish. I really like Wendy’s Chanel beret, and I don’t think she looks like a pimp, Gizelle. You need to get another mirror since you left your house in those awful pants.

I am starting to see the writing on the wall with Michael and the number of drinks he is having. Michael keeps trolling around the bar, frankly acting like a predator. He keeps complimenting the other men on their attire. Ashley tells Gizelle that there is something Michael knows about the supposed engagement. Michael is unsure about this happening since he has some inside knowledge.

We have a Charrisse sighting right when Candiace is going to sing her song. She is having issues with the mic and then finally the auto-tuned track starts playing. Thank God for that! In their ITMs, the other ladies sure shade Candiace on her singing.

Juan grabs the mic and he starts singing Robyn’s praises. He finally puts a ring back on it and I think Wendy is happier than Robyn. Gizelle has to tell her to back it up. She was so over-the-top it was frankly a little bizarre . Gizelle is happy that Crocodile Dundee got it wrong this time. She thinks Michael wanted him for himself. Gizelle may be right about that one.

Michael really seems to have a love affair with Juan. He is a little too excited about a private bachelor party with Juan in Vegas. Michael wants a party with no cameras that can document his bad behavior. Something tells me Michael’s invite for that party will get lost in the mail!

Just as Gizelle is bashing Karen for not being there, in walks our Grande Dame Karen! She is disappointed that she missed Robyn’s moment since she doesn’t get them often. LOL, love her shade! Karen has to defend her tardiness since they don’t believe her plane issues.

Gizelle starts grilling Karen about Monique making an appearance at the wig event. Karen defends her timeline, saying she made sure that they wouldn’t cross paths. She had to send screenshots to everyone to show she didn’t do it on purpose. Gizelle thinks Karen set them both up to collide. Move on, Gizelle, and change your pants while you are at it!

Michael then tells Chris Bassett he needs to control his wife when he hears the ladies fighting over the altercation with Monique and Candiace. Oh no he didn’t! Chris tells Michael to keep his hands to himself and there is some pushing.  Michael keeps making a point of saying, “Are you touching me?” Wendy doesn’t want Eddie in the middle of that white boy battle. Juan has to calm Michael down since he is the only person that he can focus on.

Michael is totally out of control. It then escalates into Ashley yelling about Candiace not having self-control. Michael wants Chris to go to jail for touching him. This is totally insane. Michael is a respected businessman according to him. He is totally making a fool out of himself and it is shocking to see this sh*tshow play out. Chris does a good job of maintaining his composure dealing with this ranting Aussie. He surmises really accurately that Michael gets away with talking down to his woman but Chris won’t tolerate him disrespecting Candiace.

Karen and Ray decide to exit this crazy scene. Candiace and Chris are outside the club and Karen is troubled about the “popping out” stuff. Candiace is more concerned with Karen not having her back this season. WOW, this season really ended with some wild moments!

We have our ending notes after this extended episode:

Karen and Ray are working on their marriage and he still wants to move to Florida.

Candiace and Chris want to start a family in the fall. She wants to avoid an Aquarius baby since they are crazy. Does she have personal knowledge of that?

Robyn and Juan are going to build a new home and have a destination wedding after paying off the IRS. Juan is rightfully unsure about inviting Michael Darby to his bachelor party.

Wendy is going to continue her political commentator career. Her mom is proud of her now but is secretly hoping for her to remain a professor so she has something to brag about.

Gizelle and Jamal don’t plan on moving in together anytime soon. Duh, we ALL knew that one. Jamal is still alive and well in her phone.

We then have a break in the endnotes and Robyn is getting down on the dance floor. We hear Michael fighting with the production staff. He is ranting about them casting low-life people on their show. Ashley is screaming for him to stop and telling him he is embarrassing the sh*t out of her.

After Michael continues to get in fights with security, we get their ending notes:

They went on a family vacation the NEXT day and she is pregnant with baby number two. Wow, that is some crazy sh*t. He literally suffered zero consequences for his actions the previous night.

In her ITM, Monique shares that the complaints were dropped and she wrote a song called “Drag Queens” that was inspired by the incident. In her ITM, Candiace shares that Monique and her trash lawyer conveyed to the court that the altercation was reality show drama.

Side note: It was interesting how the ending of this episode was spliced together like it was. You usually have all of the endnotes together but production obviously had some loose ends to tie up. I need a shot of tequila and a huge glass of wine after watching RHOA and this crazy RHOP finale episode. See you all next week!

Next week, we are on the Reunion couch with Monique and Candiace in the same room. Yikes, this is going to be insane. Have a great week, everyone!