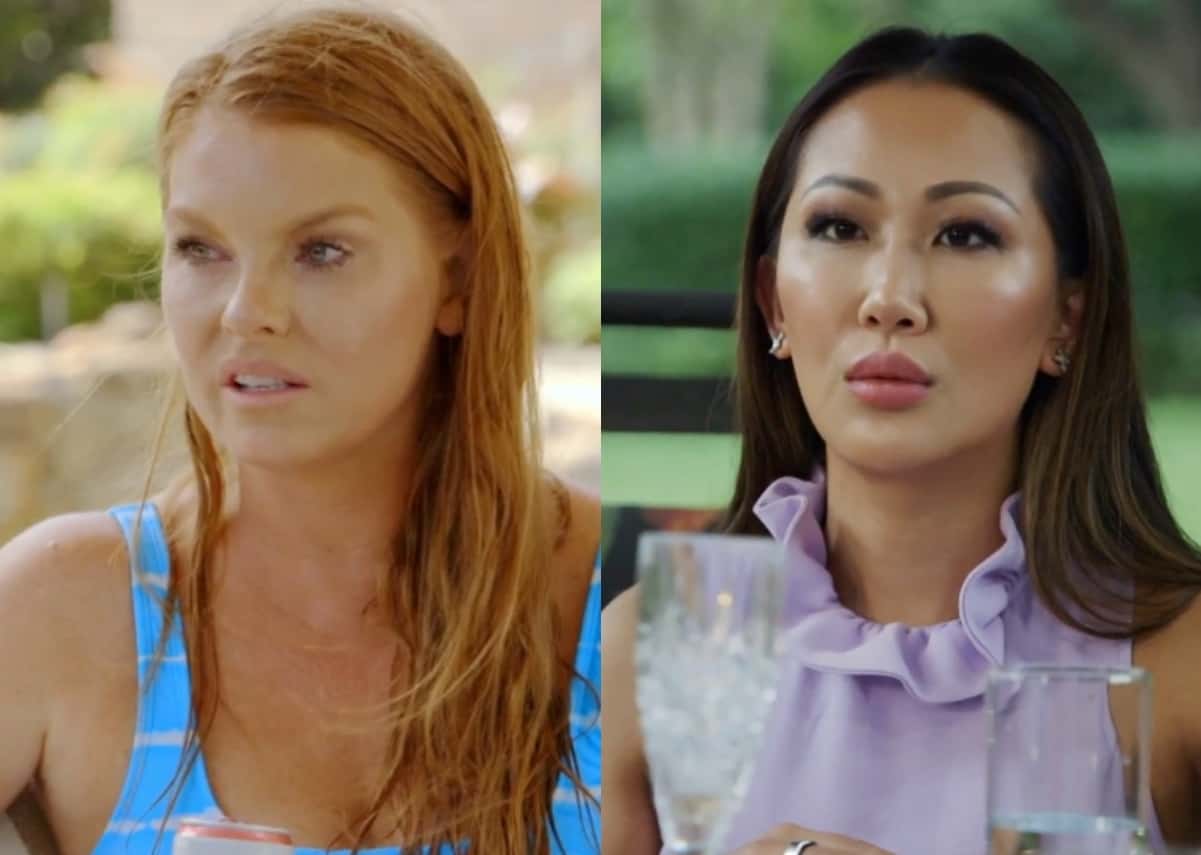 The Real Housewives of Dallas are kicking off a fresh new season (+ some never before seen moments). Although many familiar faces and personalities still grace our screens, one new housewife has got everyone talking. Hint: She’s BETTER than Doogie Howser!

The coronavirus affects everyone — even housewives must quarantine and Zoom to see their friends. While on a call with some of the OGs, Stephanie has decided to get everyone out of their houses for a pool party in her backyard. She promises it will be a safe function, as there will be a “rectal temperature check” at the door, especially for her BFF, Brandi.

In other news, since Louis died, Kameron got a new dog, Fanci. Kameron shares the sad tale of Louis’s death and does not hold back. Her husband, Court, found Louis dead. It turns out that Court also forgot to give Louis his medicine! There was an autopsy done on the dog so that Kameron could move on from blaming Court for his death, and after lots of therapy, she was able to get a new pup.

Fanci has been away at training school; however, it is noticeably clear that Kameron undid EVERYTHING that the dog trainer taught this dog. Court looks mortified when the trainer calls an “intervention.” The trainer brings out a schedule, and it appears as though Fanci has a better workout regime than most people. Lifestyles of the rich…

Stephanie and her sons are breaking out after being quarantined for three months. They are heading to Brandi’s house for some entertainment because Stephanie is at her wit’s end. Stephanie calls this a “corona-free” zone when she gets questioned about hugging Brandi and even warns to save tweets… cuz nobody’s getting the ‘rona.

In the meantime, we are graced with Dee’s presence. Dee looks even more plastic than usual — her face hardly moves when she greets her daughter, D’Andra. They really have the oddest relationship. D’Andra explains that the virus has really halted business and Dee just casually tells her, “You know what? I’m gonna give you $100,000.00.” WHAT. Dee claims that D’Andra has proven her work ethic and has taken full responsibility of the company.

Tiffany, an old friend of Dee and D’Andra’s, joins the ladies for an outdoor lunch. Tiffany is a BOSS and is essentially the daughter Dee always wanted. She is a genius doctor who has been working throughout the entire pandemic and has decided to be on the show because….??? All kidding aside, Tiffany is looking forward to meeting *most* of the women…

Brandi is still reeling from her insensitive, racist video she posted about three and a half years ago. The guilt has been unbearable, and she hasn’t been able to put it in the past, despite her apologies. Brandi filmed herself making “squinty” eyes, using an accent, in poor taste, AND in front of her children. Brandi felt so ashamed that she actually went away for treatment because she was suicidal. Stephanie listens and does her best to try and help Brandi move forward, but Brandi was willing to end her life because of the video.

D’Andra defends Brandi to Tiffany because, after all, Brandi is a Christian. Tiffany is not quite sure what to believe or how to deal with Brandi because she was actually bullied in her past about her ethnicity. So this is about to get interesting.

Kameron is hosting the world’s biggest and snazziest garage sale I have ever seen. I guess it’s true: Everything really IS bigger in Texas. Kameron’s working toward selling her current home (see photos here) so she can snag her dream home at a cool 7.5 million dollars. Holyyyy.

Tiffany and D’Andra roll up to the garage sale in STYLE. Who knows if garage sales are even legal in this neighborhood, but you better believe Stephanie showed up. Stephanie knows better than to miss another Kam event — she doesn’t want to hear about it for all of eternity! Stephanie invites Kam’s friend Jen (who is she, btw?) and Tiffany to her upcoming pool party. Tiffany isn’t much looking forward to this event as she cannot swim (child prodigy, but can’t swim?) and because Brandi will be in attendance.

We get a chance to see inside Tiffany’s world. She has adorable five-year-old twins and a husband who she met when she was 23… the same age she graduated med school. Tiffany is a self-proclaimed Tiger Mom who is “better than Doogie Howser,” and she has super high expectations for her children who came from her “overachieving ovaries.”

Stephanie sends her boys packing so that she can have her pool party. The slo-mo entrances to this party are EVERYTHING. The ladies are in it to win it. Kary claims that her new motto is “Drink tequila — no corona,” and things really take a turn over lunch when the women begin discussing their vaginas. Brandi proclaims, “I have a gobbler.” OH WOW. Tiffany looks absolutely astounded, particularly when Jen and Brandi excuse themselves to check out their vaginas. Hold up — this chick went as far as comparing vaginas with Brandi, yet she STILL didn’t win a permanent spot on the show?! Luckily, Stephanie makes a nice toast to break up the conversation, followed by Kary asking each woman to talk about the positive and negative aspects of quarantine.

We gain some interesting tidbits from this. We learn that D’Andra is starting to see a Shaman. She sees the pandemic as a blessing, as it forced her to slow everything down and she has since gotten off all her meds. Dr. Moon explains that when the quarantine first hit, she was able to spend more time with her family. She also states that these things are facts and for those who *still* do not understand the coronavirus, they “should not be friends” right now. Boom.

Brandi takes this time to address her “insensitive choice” and tearfully explains that her amazing friends have been there for her during her difficult time. Tiffany states that she is a little bit “confused” about how upset Brandi is regarding her comments. She tells Brandi that they should talk later. Dun dun dunnnn.

Hooray for the producers asking Kary how Brandi’s comments are more forgivable than LeeAnne’s racist remarks last season. According to Kary: “LeeAnne was doing it out of hate. Brandi’s behavior was ignorant and stupid, but she was so devastated about it…”

Tiffany makes it clear she is not coming at Brandi; however, she cannot sit silently. She reminds Brandi that what she did was wrong and Brandi rattles off how sorry she is for her behavior. Tiffany then shares her background with Brandi and we learn that she emigrated from China when she was six years old. Her parents were already in America, so she hadn’t seen her parents for three years. Tiffany did not know ONE WORD of English. When Tiffany went to American school, students actually did the slant eye move that Brandi pulled in her video. Where do these women go from here?! To be continued…